When my kitchen counter became too cluttered with recyclables, I cleverly devised a plan to encourage my children to help me clean up.

Like many northern states, New York’s Returnable Container Act charges consumers five cents for bottled beverages.  Although Florida doesn’t currently charge its consumers for bottles, I thought I could institute a five cent deposit policy in our home by paying my girls five cents for every recyclable container they tossed into our recycling bin.

However, before implementing our recycling program, the girls needed a quick lesson in how to determine which items to recycle.
I began by showing them the #1 and #2 triangle   recycle symbols on the bottom of the plastic containers. Other number plastics were tossed into the trash or we found find other ways to reuse them, but all glass containers and aluminum cans could be recycled with the #1 and #2 plastics.

Each time they tossed an item in the recycling bin, the girls would mark a tally on our recycling chart.  Each tally would represent five cents and therefore, five tallies would equal a quarter.

When my eight year old would have four sets of five tally marks, I would pay her a dollar, an idea she suggested.  My four year old loved the idea of getting a big shiny quarter for a set of five tally marks.  In turn, I would be teaching my oldest to skip count by twenty-five and my youngest would be learning to skip count by fives.  Plus, for all their efforts, the girls would receive a small lesson in earning and saving money. 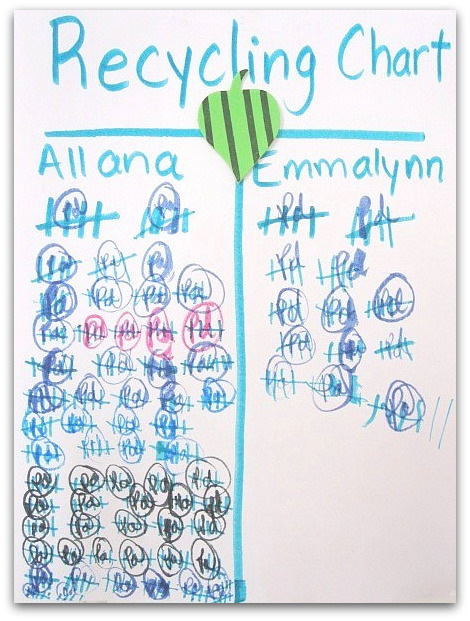 I implemented this task and teaching tool about six months ago and our recycling program is still going strong. In fact, we recently finished one side and had to start a new chart on the back.  After all, I had to demonstrate another type of recycling. 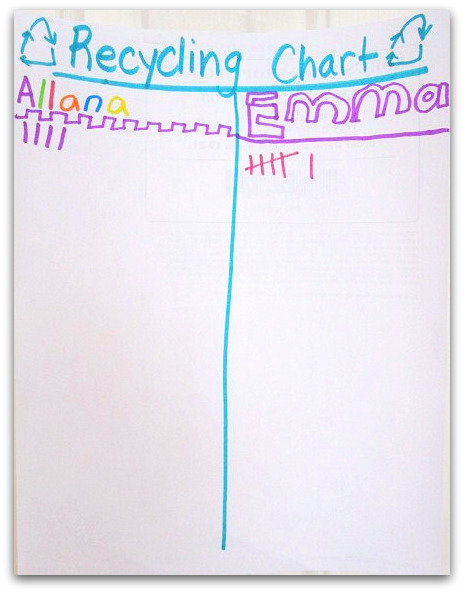