Besides having just finished two half marathons within two weeks of each other, I chose the 15K race because I had never run this distance before at Gasparilla Race Weekend.  Plus, it seems to be a popular distance with my running friends. So, yes, if you must know, I resorted to peer-pressure and did what all my friends were doing.  Even Maribel succumbed to the running friend peer pressure when she chose to run the 15K as her first running race ever. 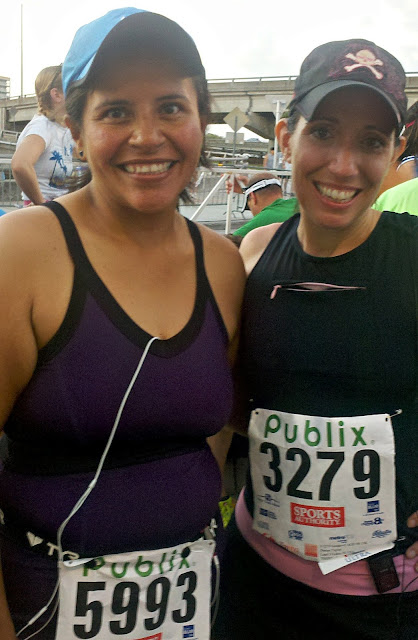 Basically, the 15K course stretches along Bayshore Blvd and back again, which is simply the most breathtaking view at sunrise and what I love most about Gasparilla next to the awesome booty. 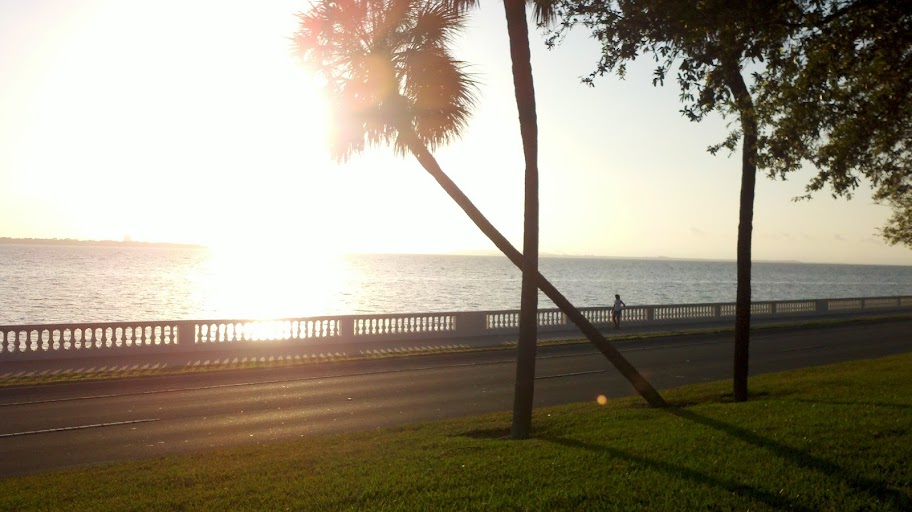 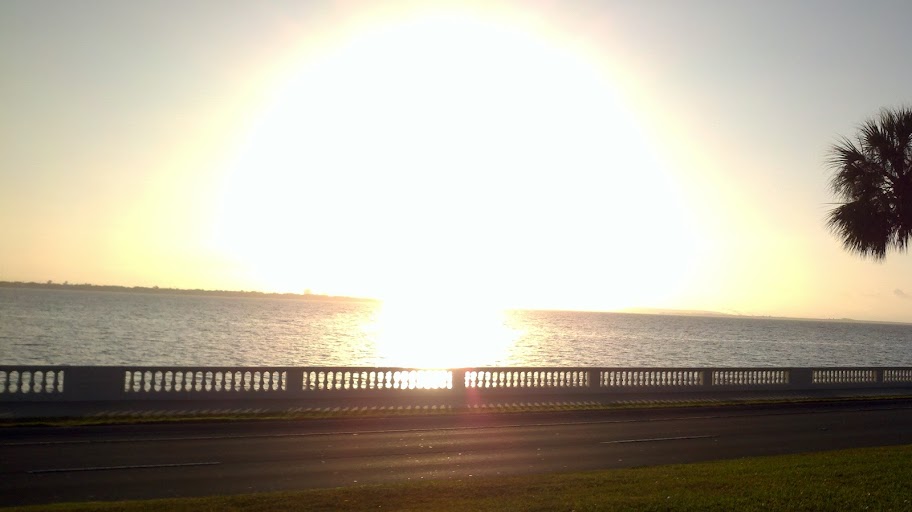 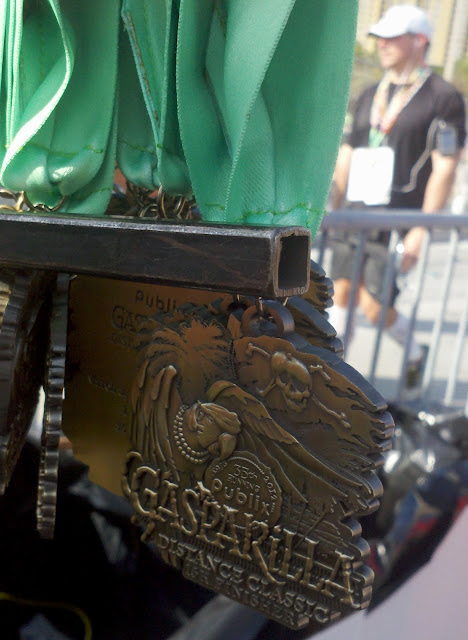 At the start of the race, the temps were already beginning to rise.  I found the 9:30 pace group and decided to tag along with them.  However, with the heat, I would soon learn that finishing under an hour and a half would not be happening today. 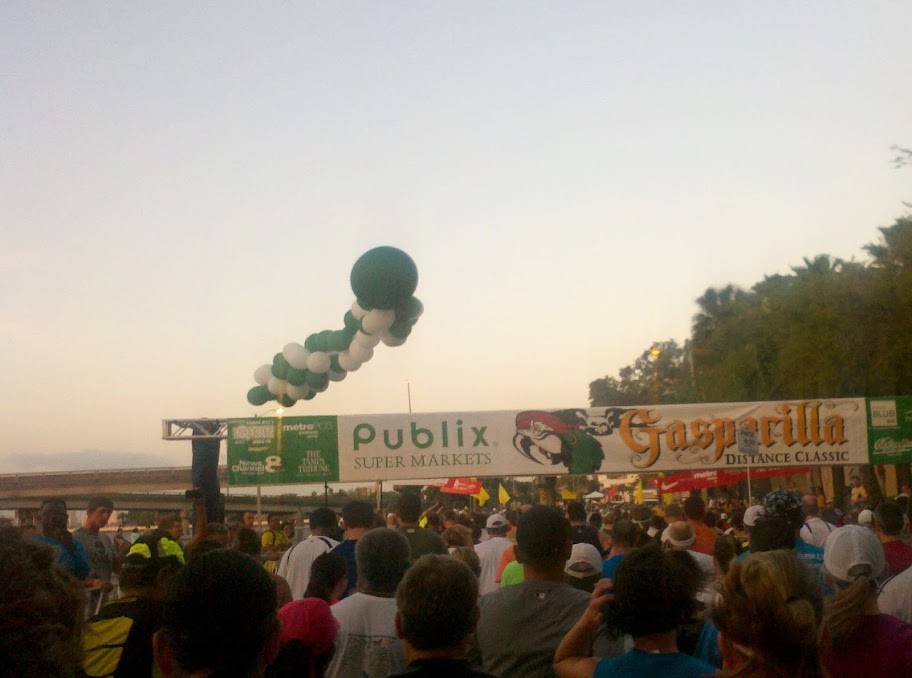 When I studied the course map the night before, I misread the map and thought there would be only two water stations on the course at miles 4 and 7.  Imagine my jubilation when I realized the EIGHT water stations were available every couple of miles!  Thank you to the Zephyrhills water gods and Gasparilla volunteers, but mostly thank you for volunteers wearing rubber gloves and handing us clean water!  The Rock ‘n Roll marathon series needs to take note of that. 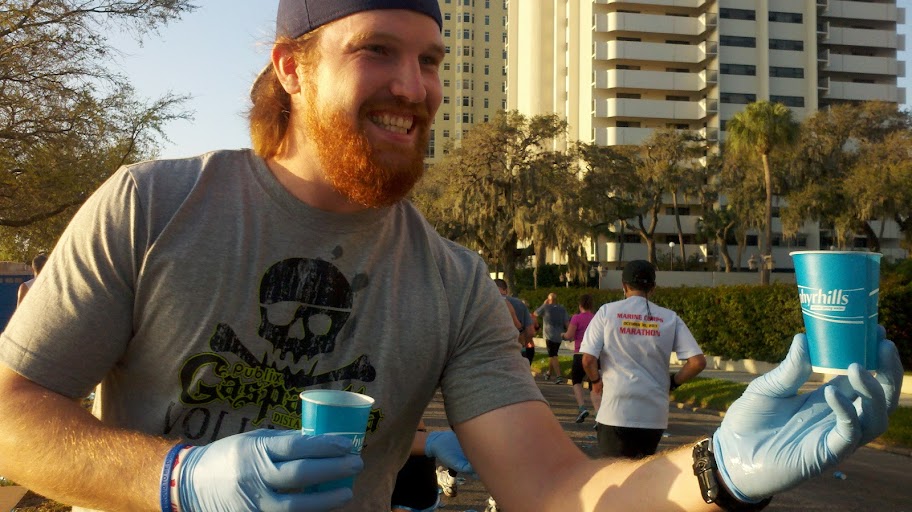 And also a big “THANK YOU” to the residents of Bayshore and the City of Tampa for running sprinklers along the course.  Those sprinklers were such a welcomed sight! 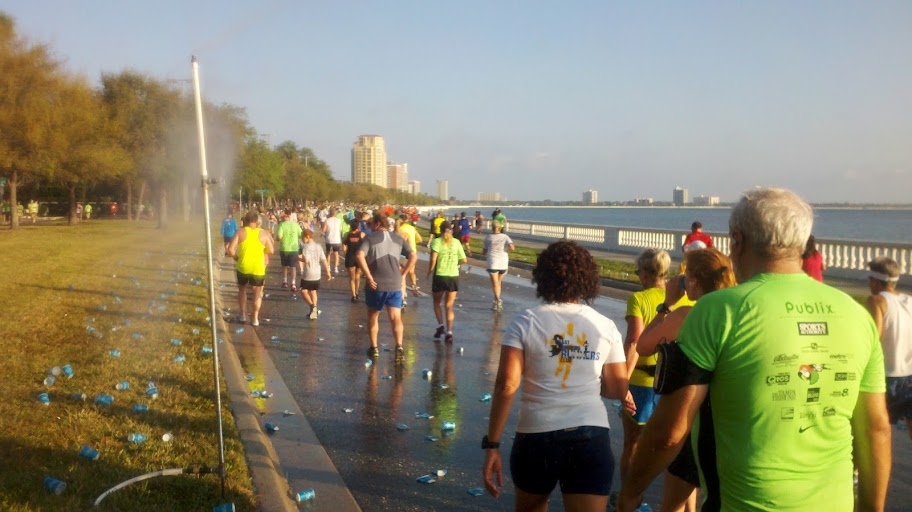 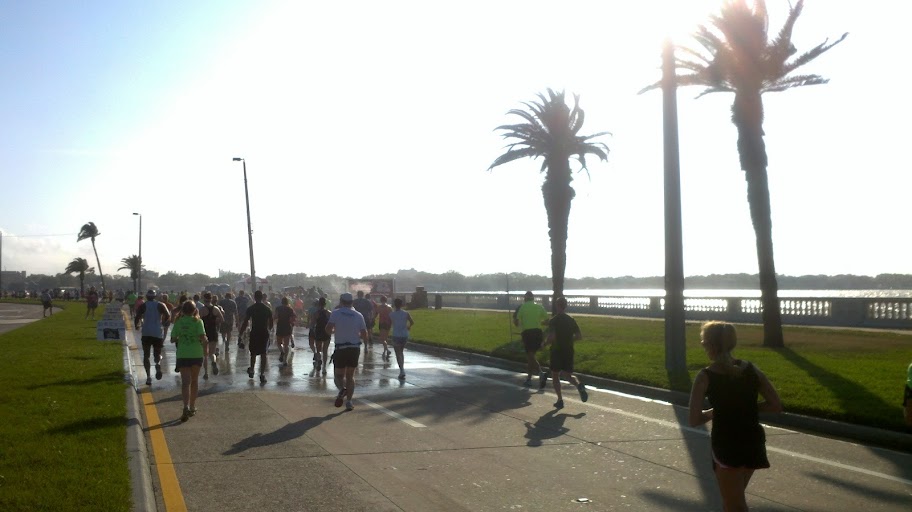 As for the actual running portion of the program, it was hot and I struggled with my 1:30 goal.  Since I had been training in cool mornings, I wasn’t prepared mentally or physically for an unexpected heat wave.  So, on race days like this one, sometimes you have to forget the PR and just run or walk it, like I was forced to do many times. 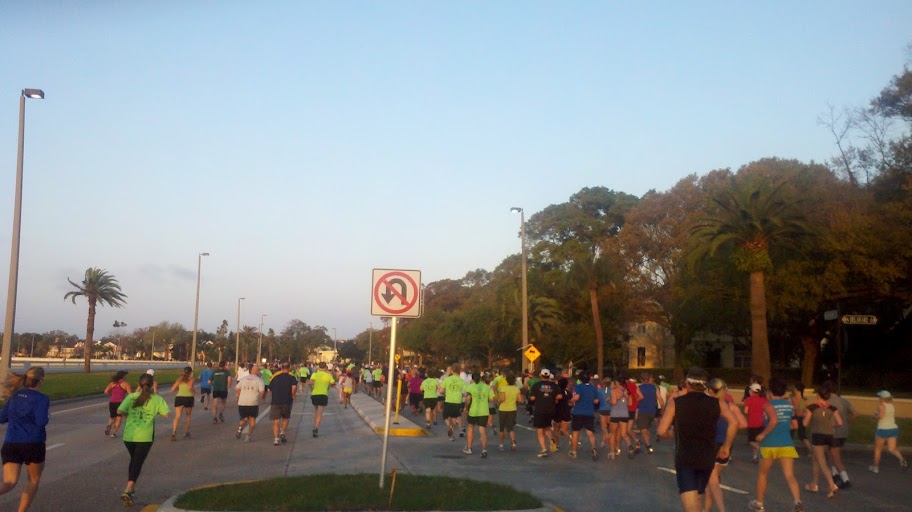 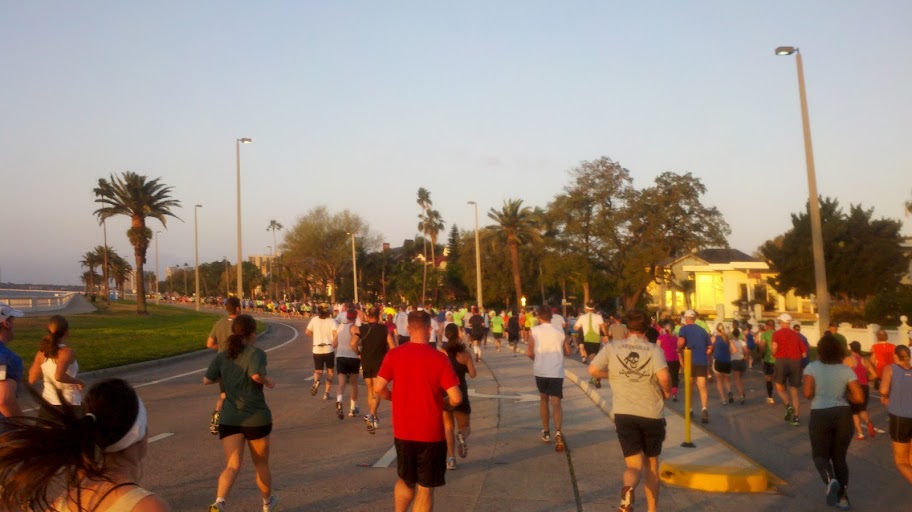 The heat was so unbearable that I started getting cramps in my side.  I needed to walk quite a bit of the course as did many others.  Between miles 4-5, we found reprieve under some large oak trees. 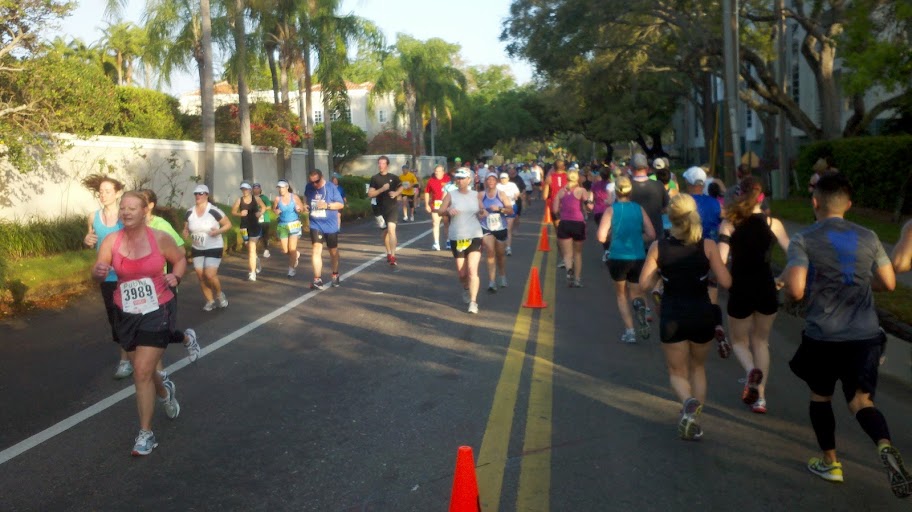 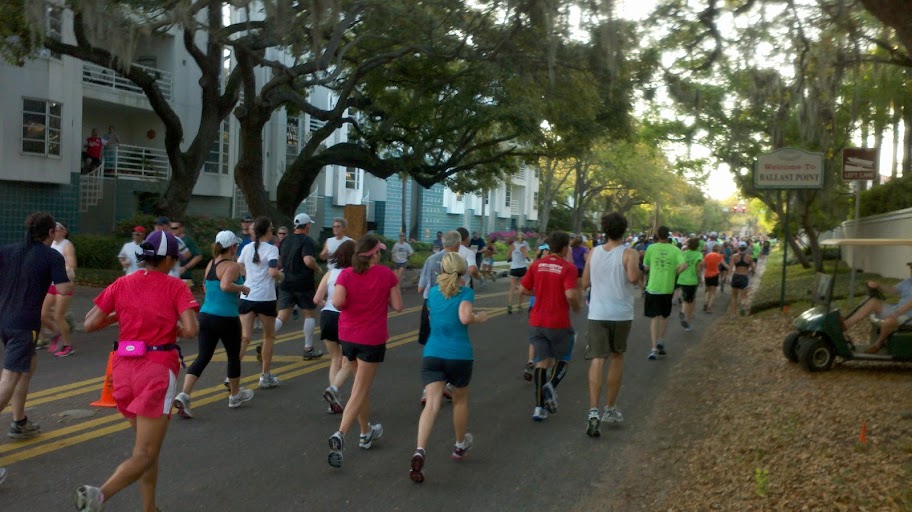 Then, around mile 5, we turned the corner and the sun beamed down on Bayshore Blvd again.  I felt like I would puke. 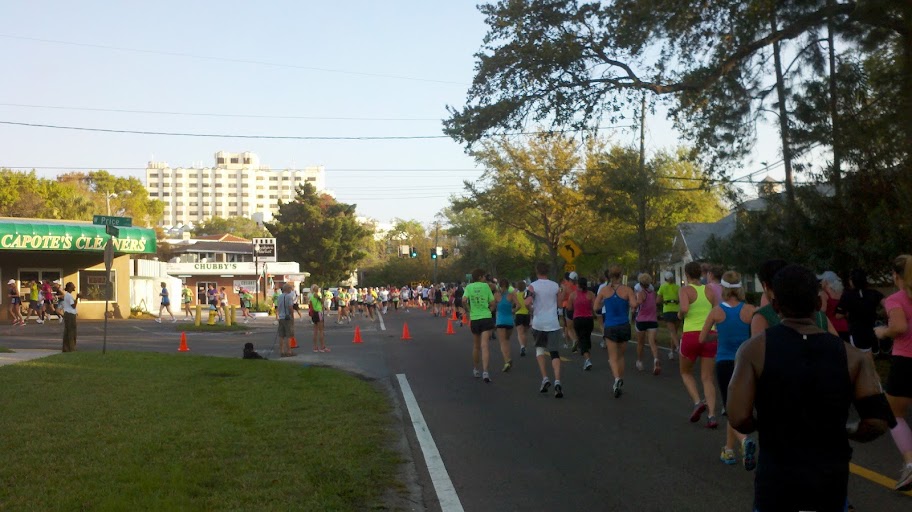 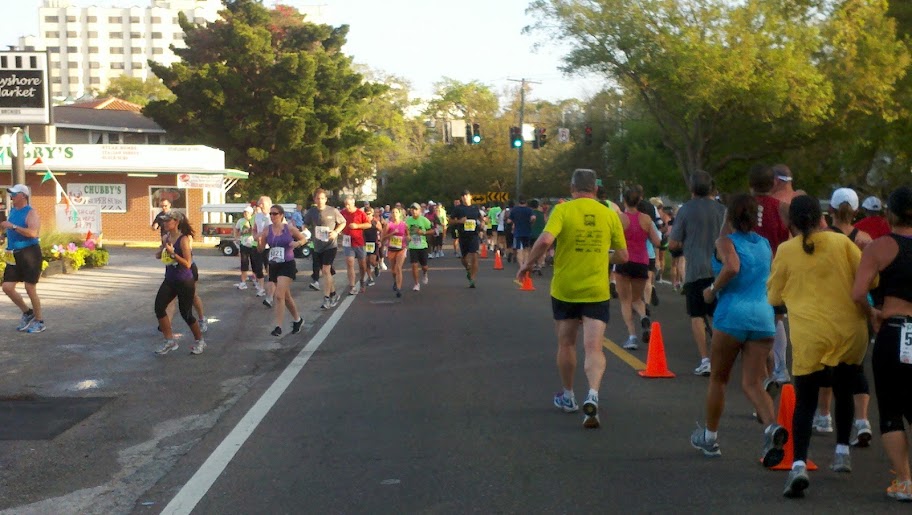 And to make it worse all better, someone offered us Krispy Kreme doughnuts.  Really?  And people actually ate them while running!  I don’t remember any donuts in the half marathon or even the marathon! WTH?!  Who knew?! As far as Gasparilla races go, this must mean that the 15K is the sweet pick.  As long as there’s no heat, I suppose. 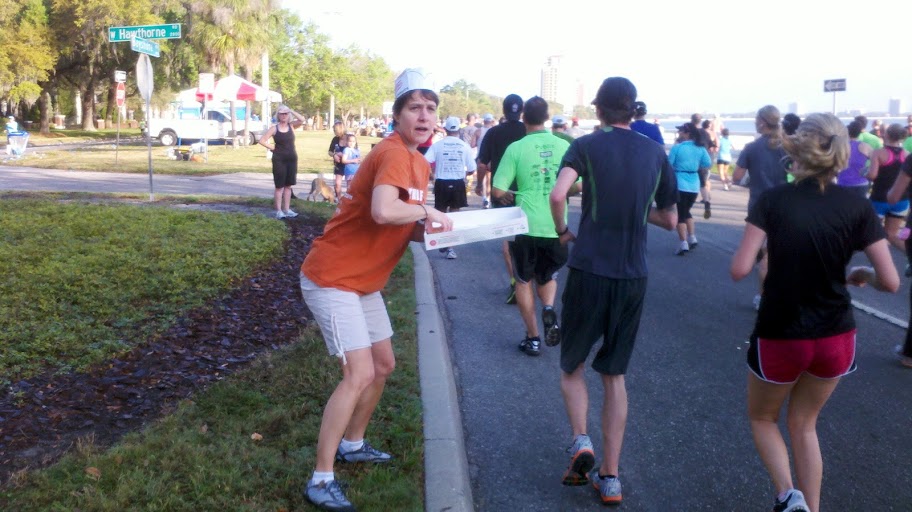 The last few miles are a blur, even according to my cell phone camera as it kept getting wet from me dumping water on myself at every water station and the sprinklers.  I just remembered wanting to finish and be done with it all.  Once I spotted the finish line, my spirits picked up but I didn’t have the energy to sprint across the finish line.  That heat did me in! 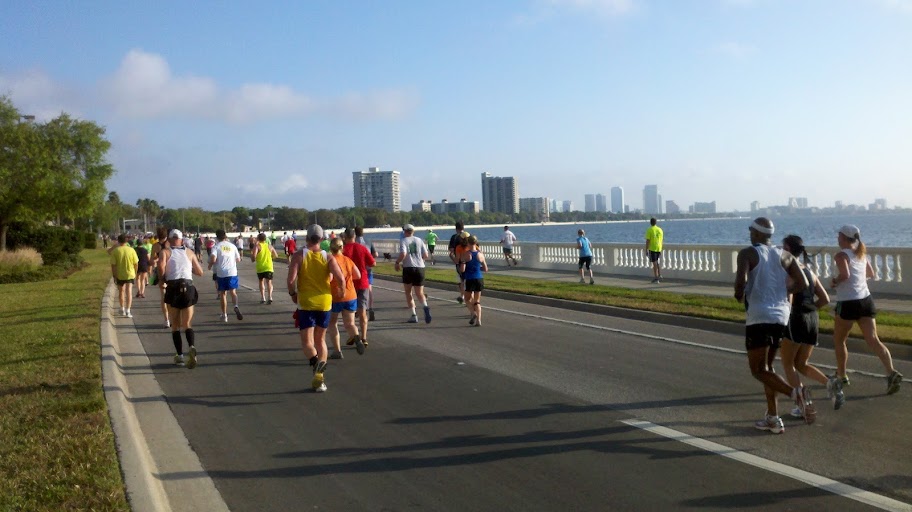 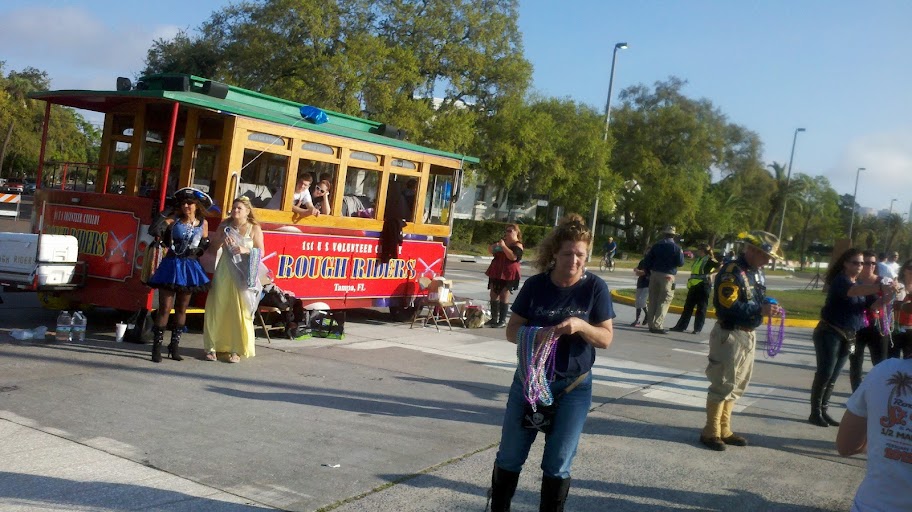 Due to all my walking, Maribel eventually caught up with me and we finished within seconds of each other.

Maribel had all the emotions of finish her first race.  I was so proud of her as well as thrilled and honored to share that special runner’s high moment with her. 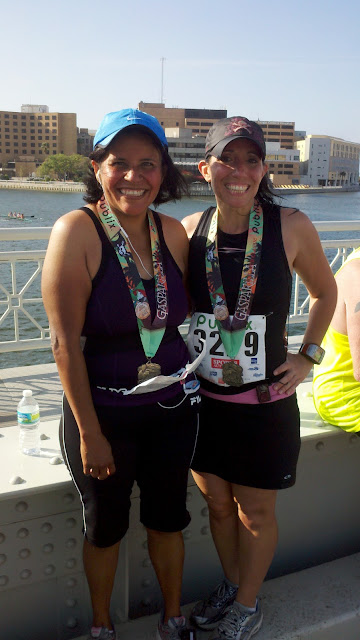 After the race, we waited for our friends (Chrissy, Faith, Patti, and Angie) to finish the 5K, but due to an unexpected delay, they didn’t start their race until 20 minutes after the official start. I felt so bad for all the 5K people who experienced an even hotter race than the 15K runners.

Once reunited with all our friends, we had chowed down on Columbia restaurant black beans (my favorite) and a free celebratory beer, which was another first for me.  Usually, I’m too tired or can’t be bothered to wait in line, but today the wait was worth it. 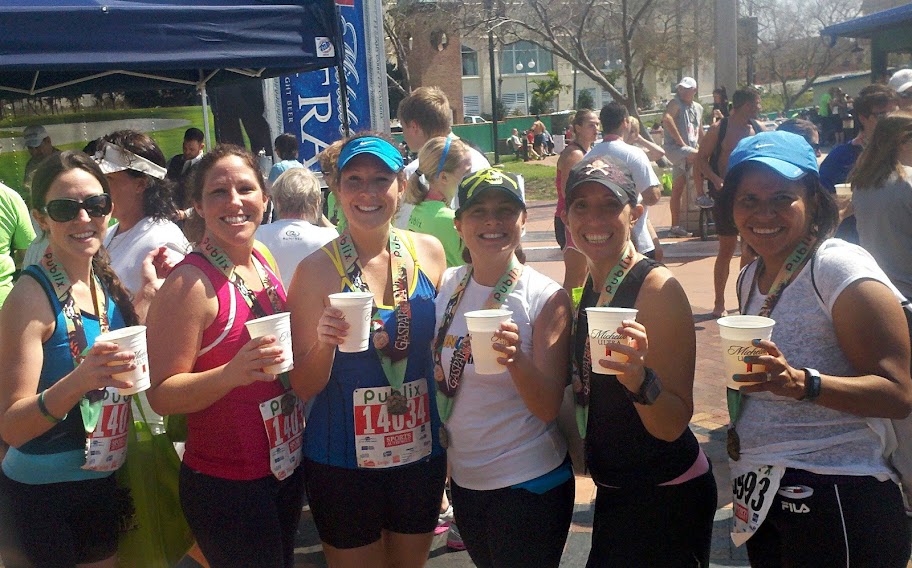 With our beer, we toasted to friends, Maribel’s first race and surviving the heat.