Although Rap River Run is always a hot and humid race, I still enjoy it.  This year the race organizers added a 5 mile run, however, I thought running a 5K at my race pace for approximately 30 minutes in the Florida heat was plenty distance for me.

My friends, Chrissy and her son, Dylan, along with Mica and her daughter, Lily were there as well a ridiculous number of Suncoast Striders (close to 90), which proves that many people enjoy this race despite the heat.  Since Rap River Run benefits Pasco’s Youth and Family Alternative, perhaps the sheer number of participants demonstrates the true altruistic nature of runners or maybe because it’s cheap and close to home. (Probably the latter.) 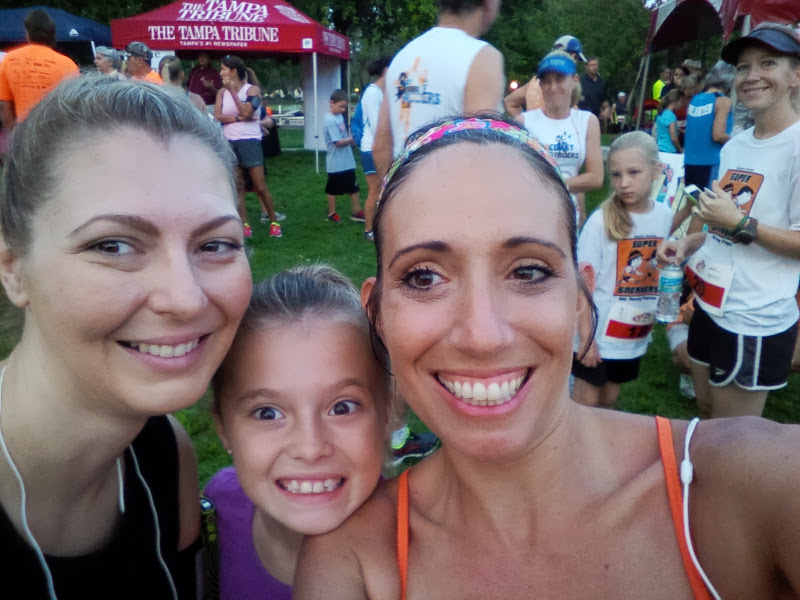 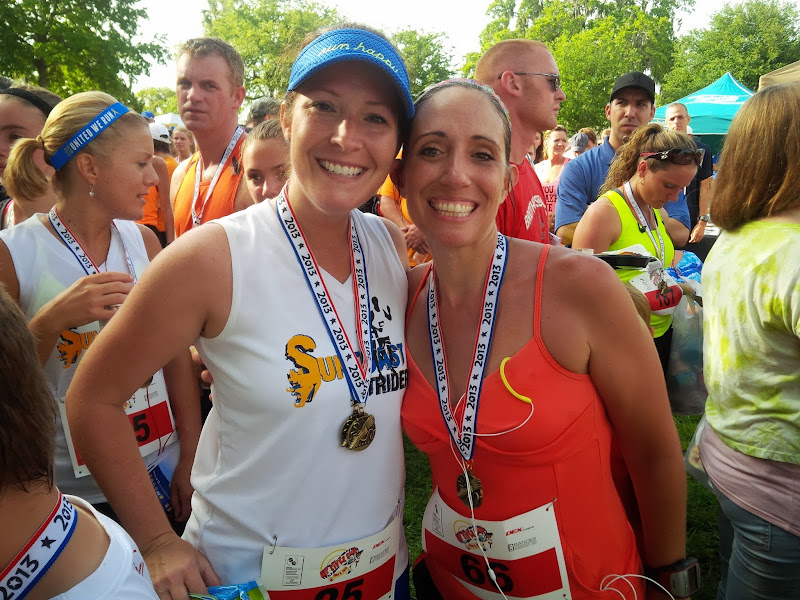 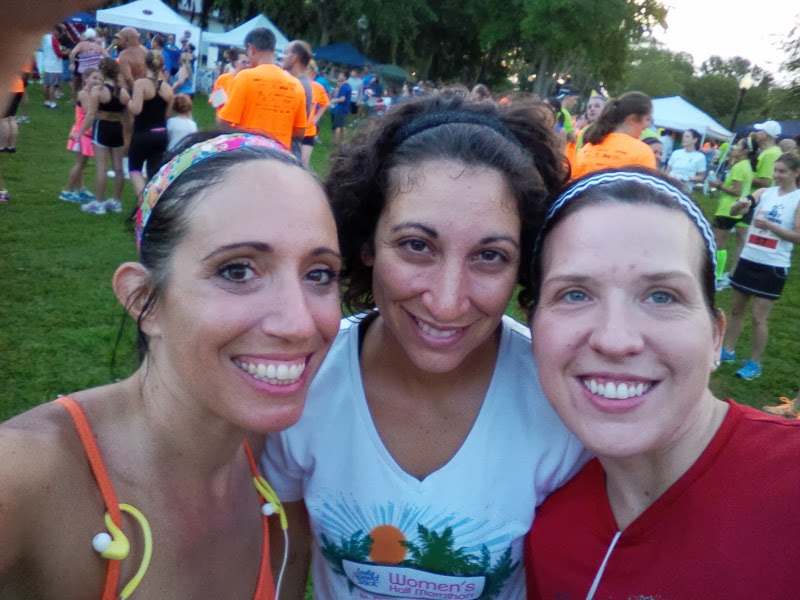 As much as my kids enjoy Rap River Run, I decided against registering them for the race since we ran Color Me Rad a couple of weeks prior.  Plus, I desperately wanted to PR.  This year, with no kids in tow, I was aiming for a finish around 27:00.   After socializing before the race, I headed over to the start line and it was game on. 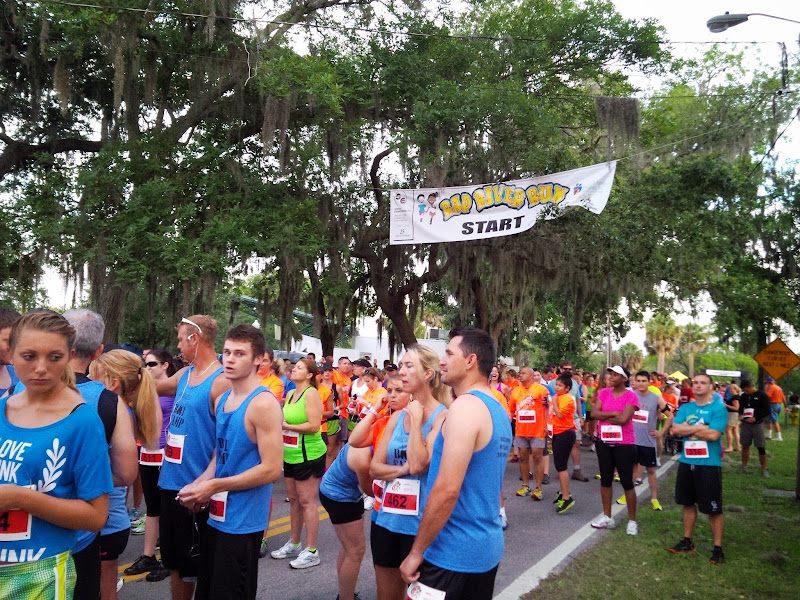 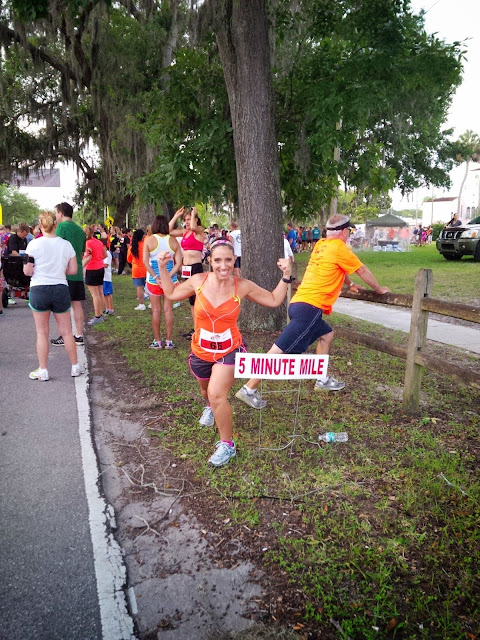 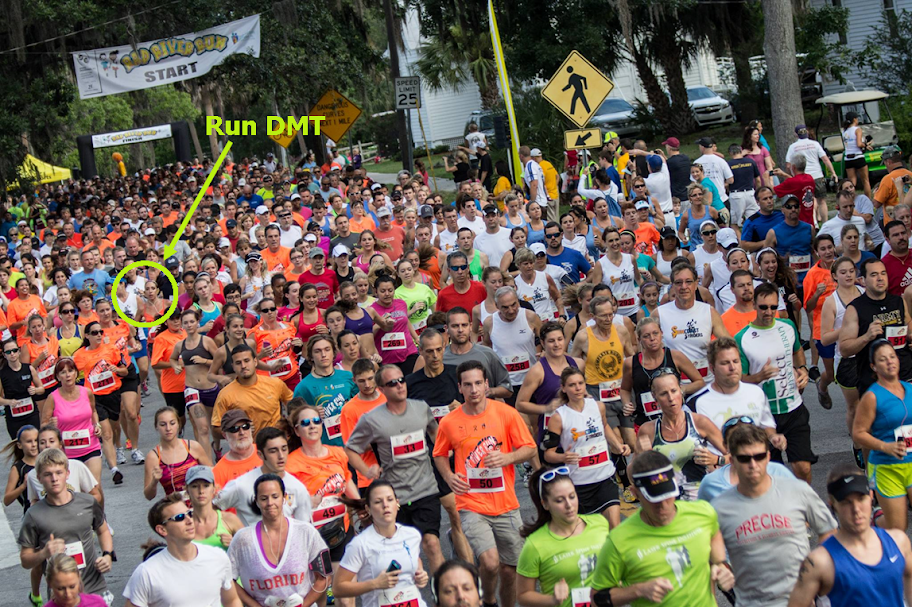 As we circled around the lake, I maintained an 8:30 pace, which I held onto until the water station.  A cramp started pinching me in my side and I needed to walk.  Dreams of a PR sadly crumbled away with the side stitch. 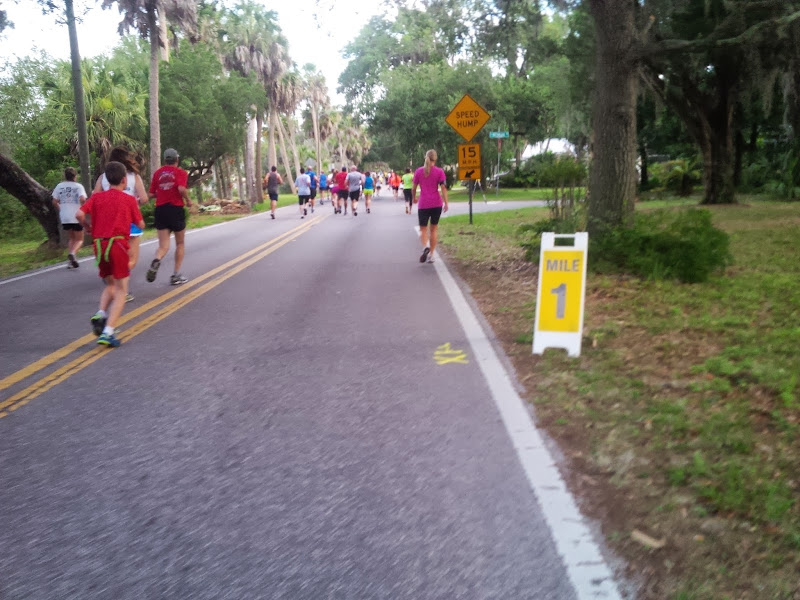 I could still finish under 30 minutes.  I gulped down some water, swallowed away the pain of a side stitch and focused back on the gorgeous run along river under oversized shady old oak trees. 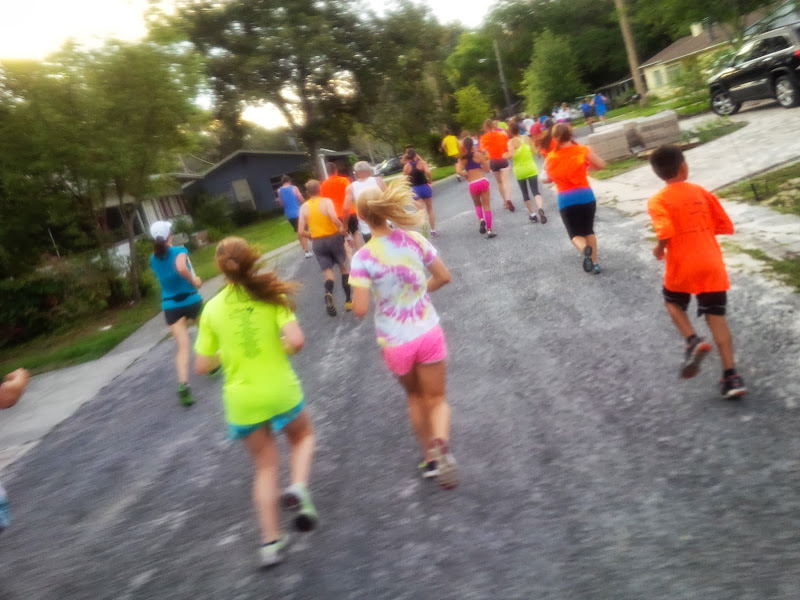 The course turned and led us down a side street.  At one intersection, Frankenstein gazed upon us to promote the Frankenfooter but the real scary sight was watching the 5 mile runners cross our path.  I saw Marcia and I knew she would be annoyed about crossing paths with the 5K course.

With Marcia still on the brain, I spotted an older gentlemen running my pace and running it quite well.  I yelled, “Looking strong, my friend!”  He looked Boston Strong and I daydreamed about being an older runner qualifying for Boston. 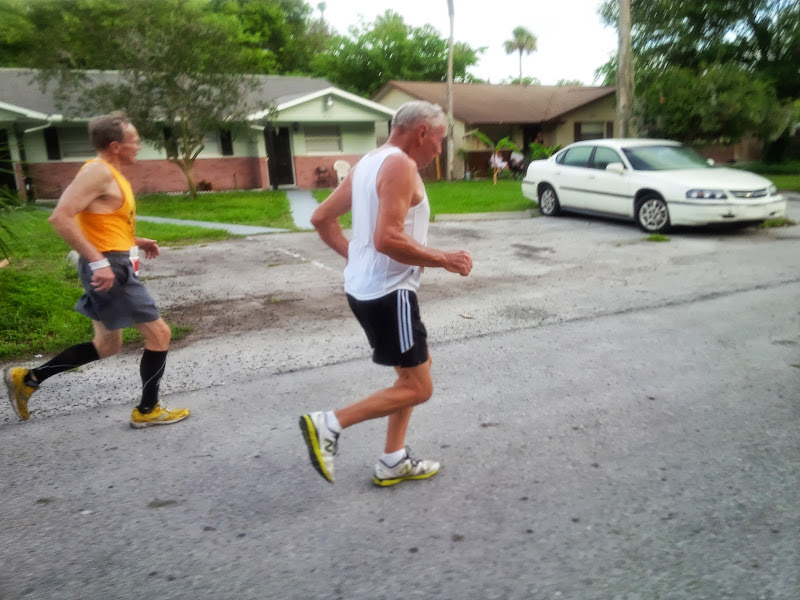 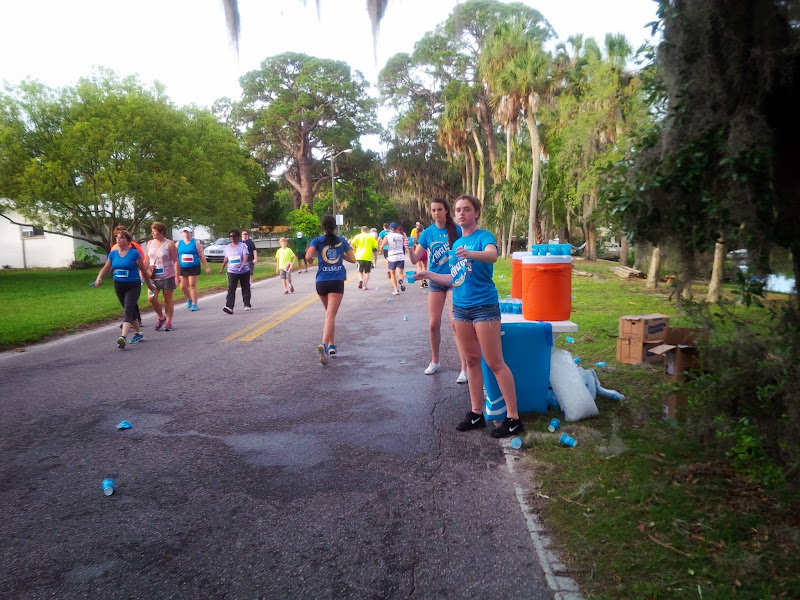 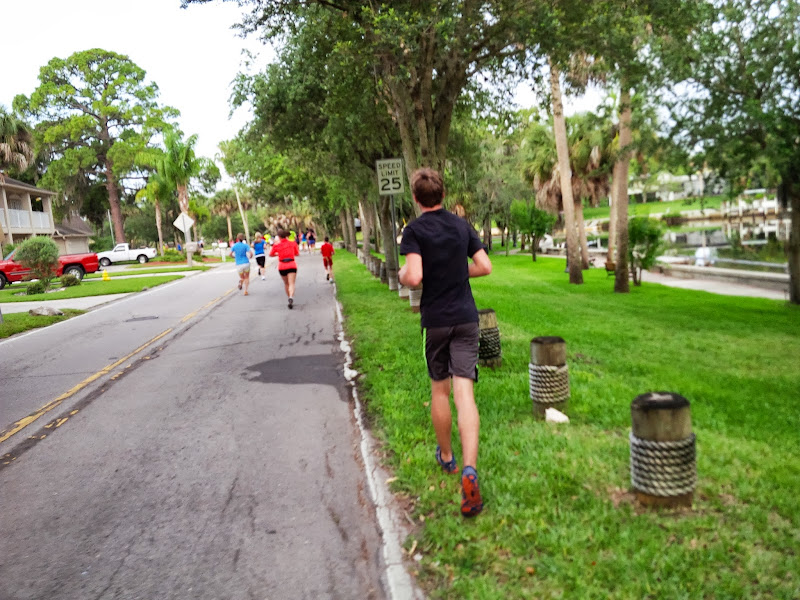 Back on the course along river, a team of young boys teased runners with supersoakers.  Though I wanted to be hit with water, they missed me and I had to suffer through the heat a little longer. 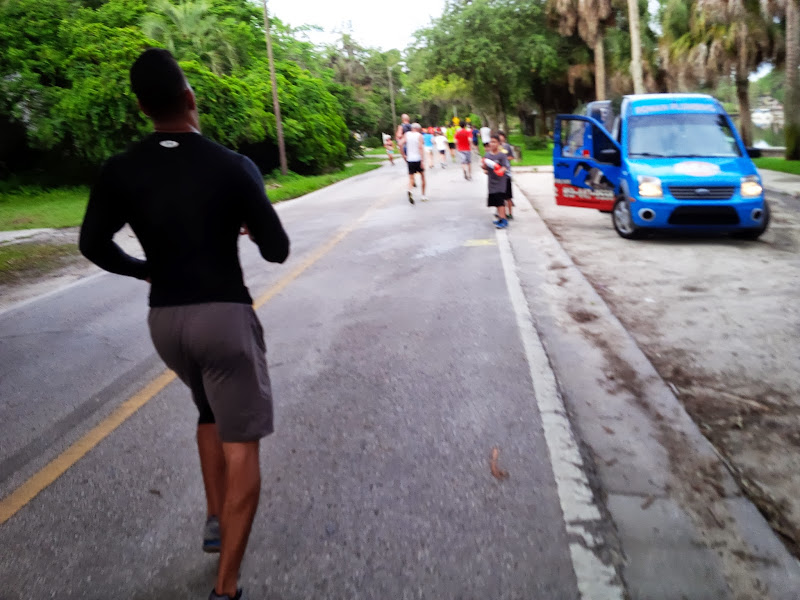 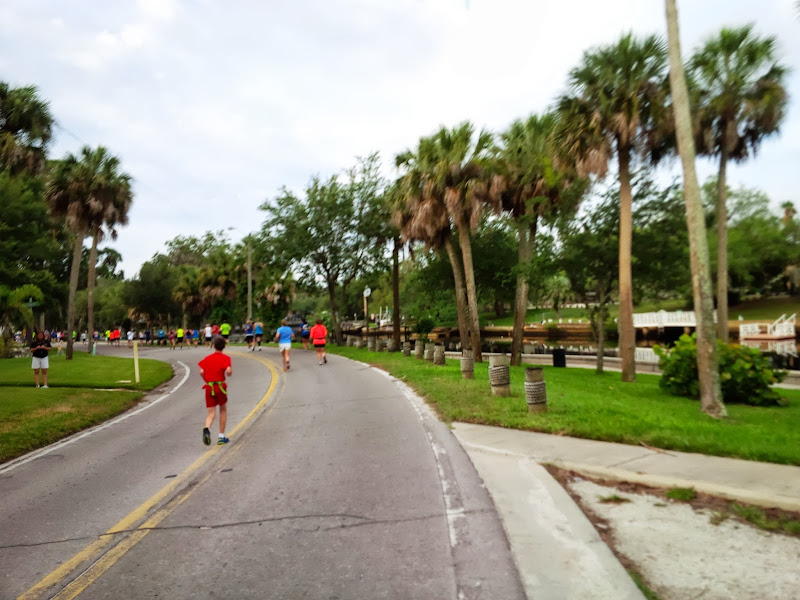 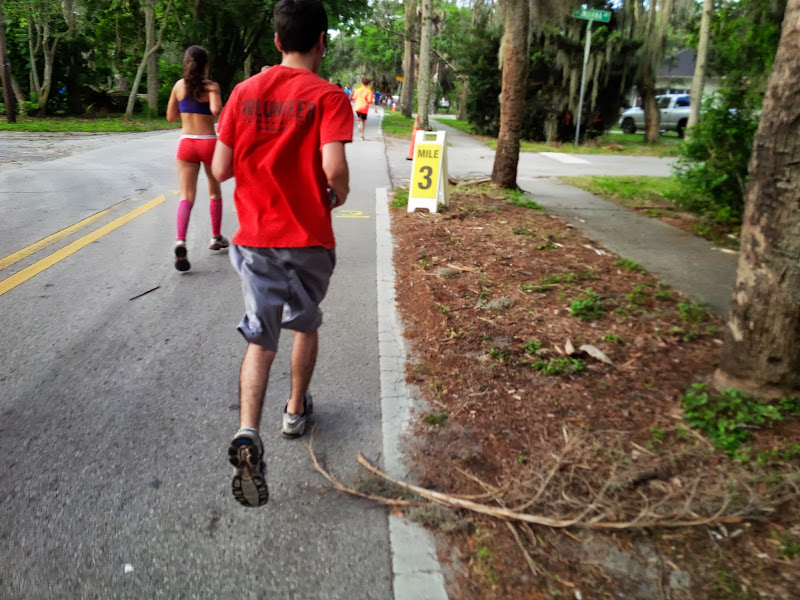 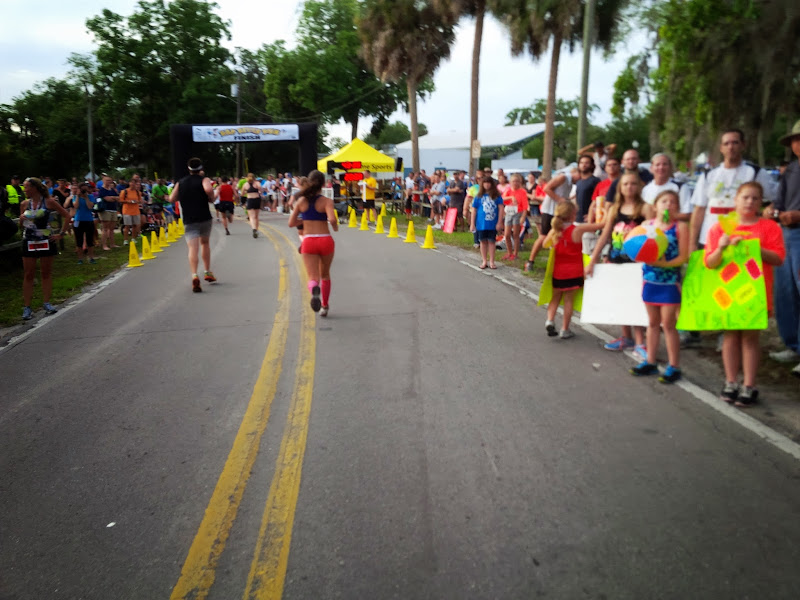 With only a tenth of a mile left to run, I pushed it to the finish line.  My friend and fellow Strider, Aaron, snapped this photo.  Don’t you love my expression and grip on my cell phone as I push it? 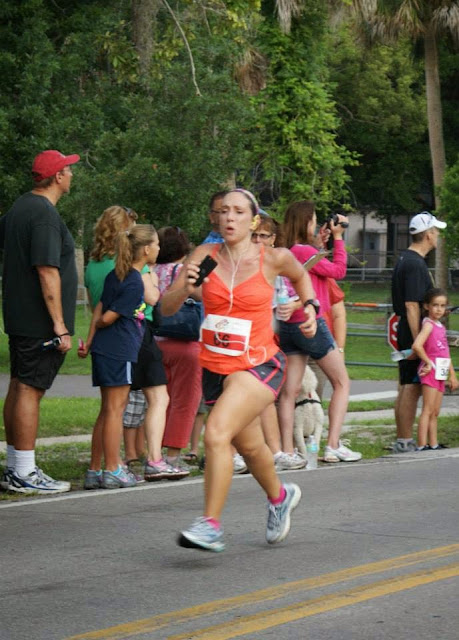 I didn’t PR but I finished under 30 minutes, which placed me in the top ten for my age group.

The Striders walked away with a ton of division awards as well as fastest running club and largest registered running club. 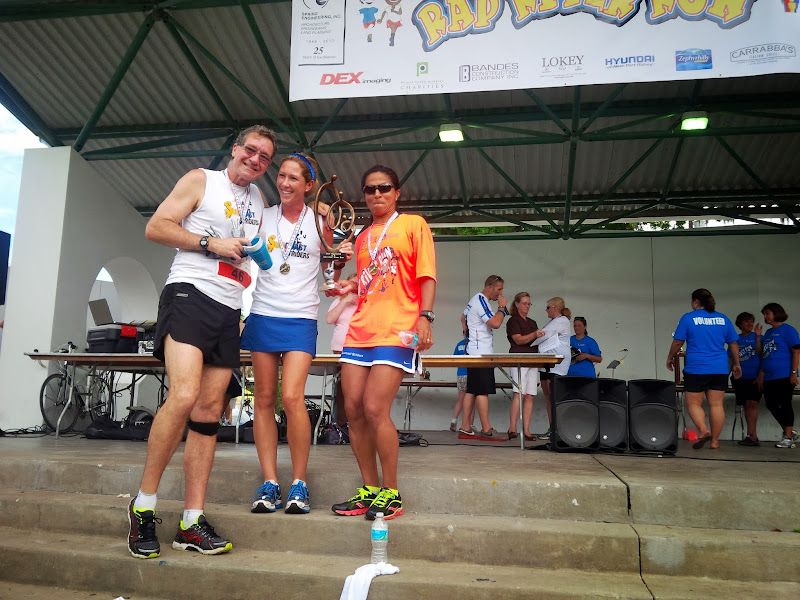 The SuperSoaker Boys entertained us as we waited for the race results. 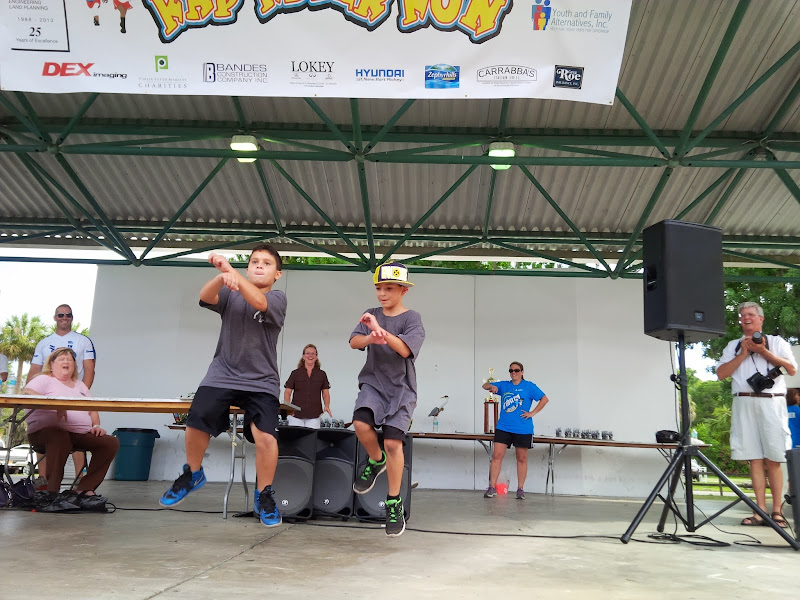 These boys had some serious breakdancing moves but I only recorded them dancing to Gangnam Style.

With heat and humidity, SuperSoaker Boys or not, I’ll be back next year and I’ll PR.