I longed to PR both the 5K and the half marathon at the Frankenfooter Living Dead Challenge.  With all my speedwork efforts, a new PR seemed like a reasonable expectation. 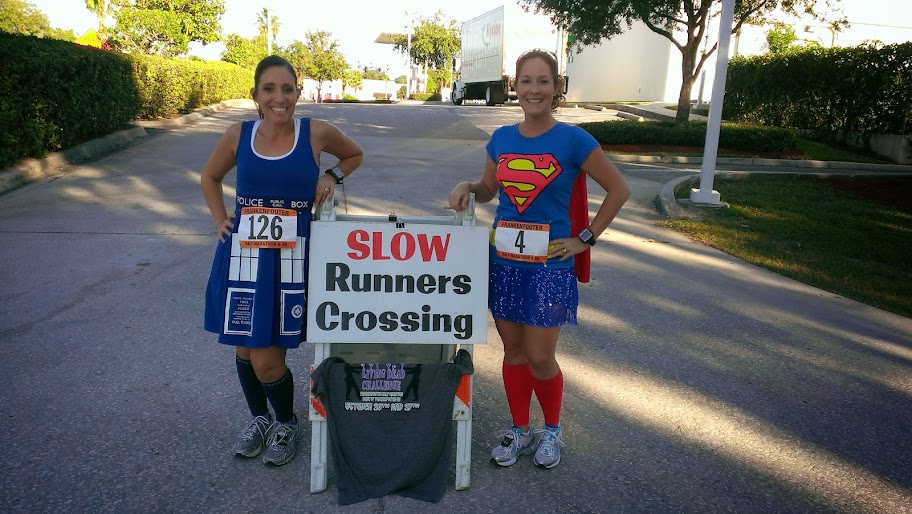 Due to unforeseeable events, the race officials had to move the race to a new location.  Honestly, I preferred the new location over the previous location at Starkey Park simply because refreshments served post-race now included ice cold beer. 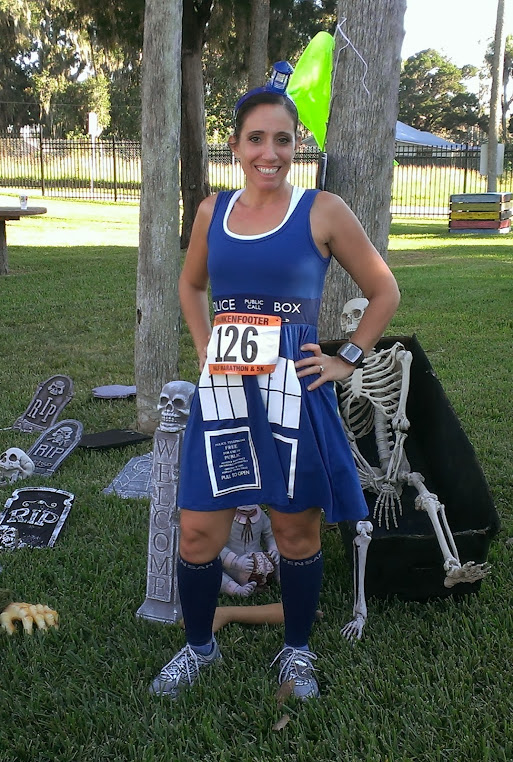 For this costumed race, I wore my TARDIS Doctor Who dress for the 5K and a few people recognized the bright blue Police Box costume.  I decided to remove the headband light because it kept slipping and that annoyed me. 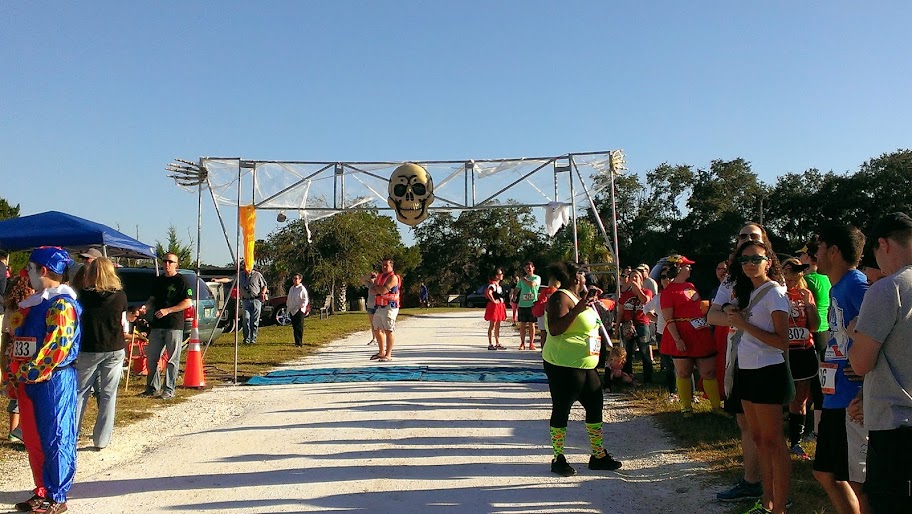 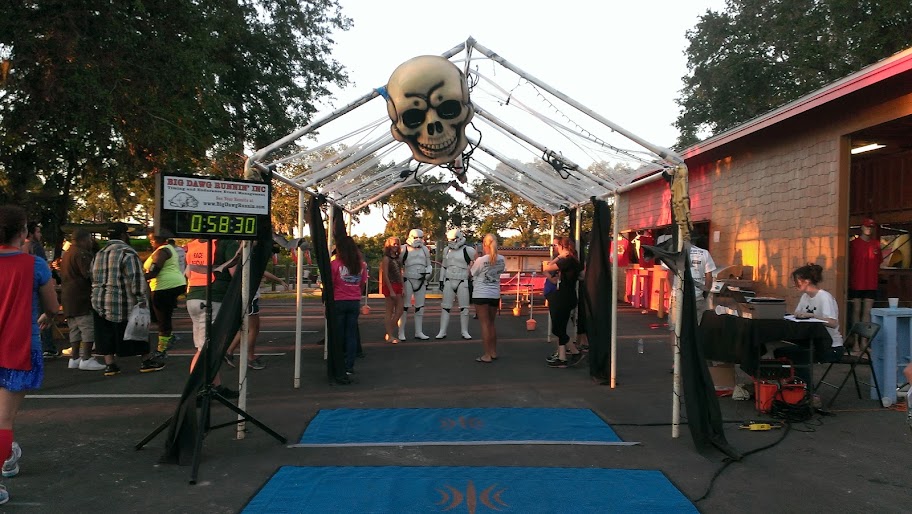 The mostly flat course started at Gill Dawg Marina and led us through the residential gulfside of Port Richey.  I really pushed it to hit that PR and once we returned to the start line, I pushed out a sprint because I mistook the start line for the finish line.  That limerock path kicked up a lot of dust while we ran which choked me.  Trying not to slip on the limestone, I slowed a bit and sprinted once more when I hit the edge of the park.

I shaved SIX SECONDS off my previous PR time and I earned an Age Group award!  I placed third in the 40-44 female division!  No costume awards for me this year and I’m good with that. 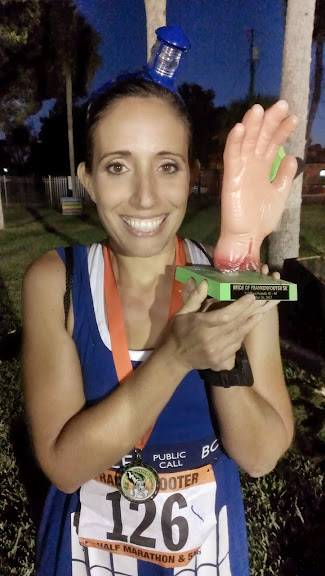 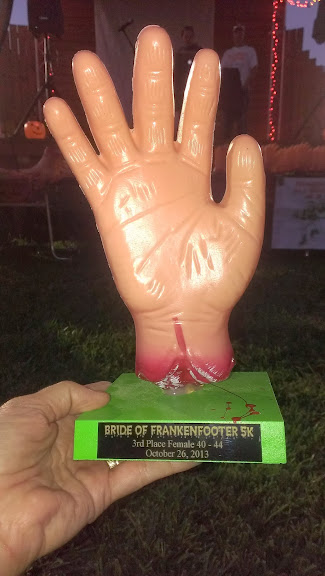 After the race, the Striders and I posed for photos with Frankenstein and celebrated our achievements with a few beers. 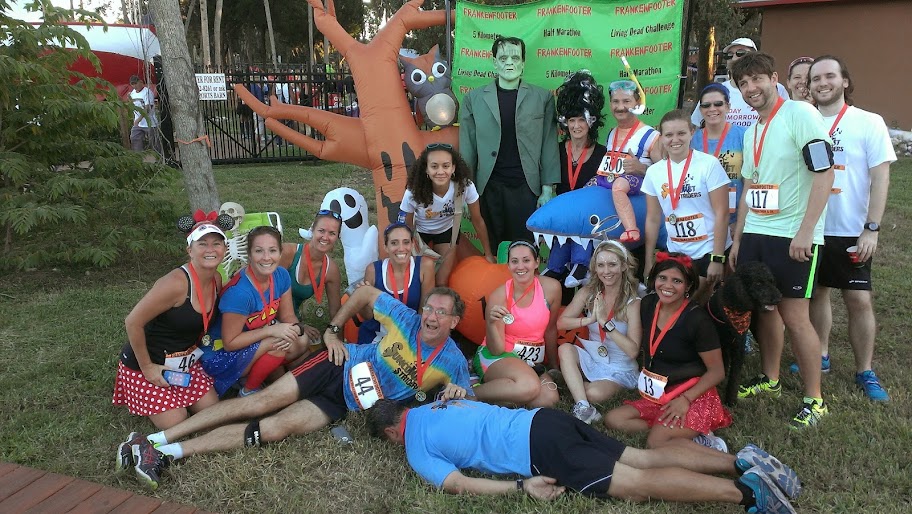 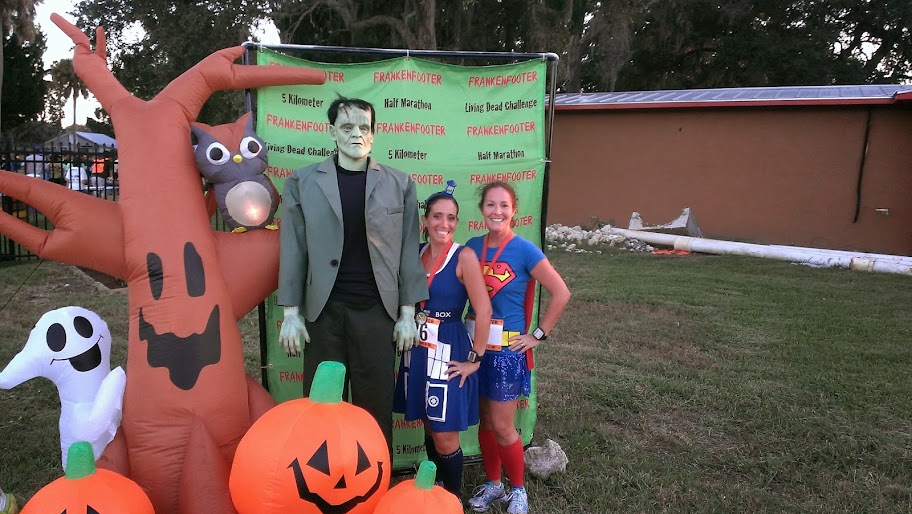 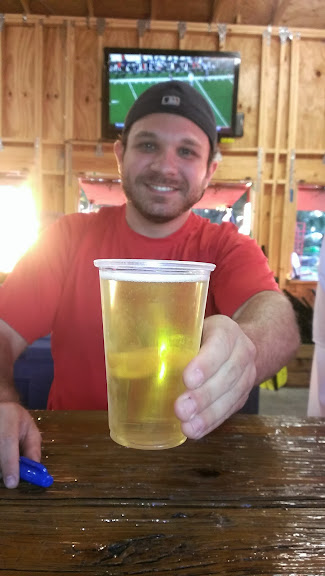 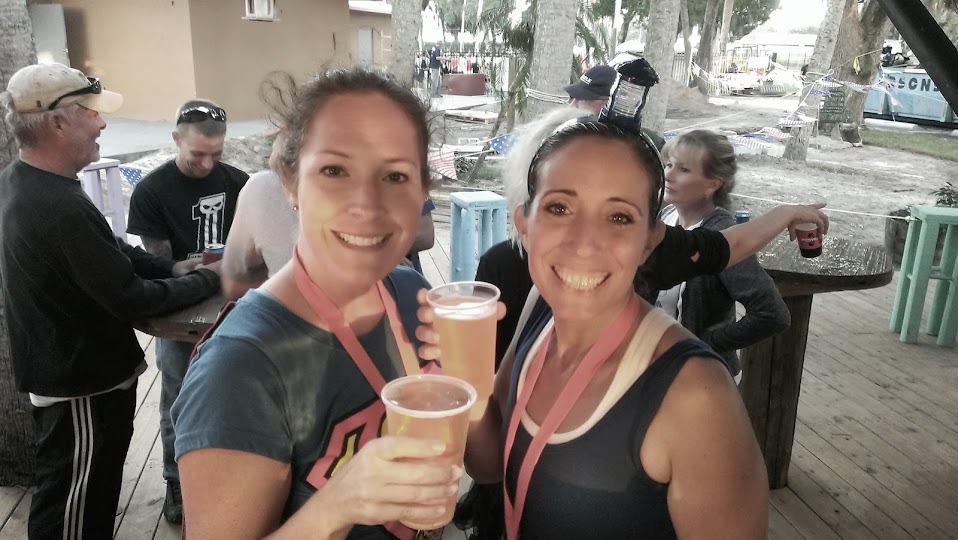 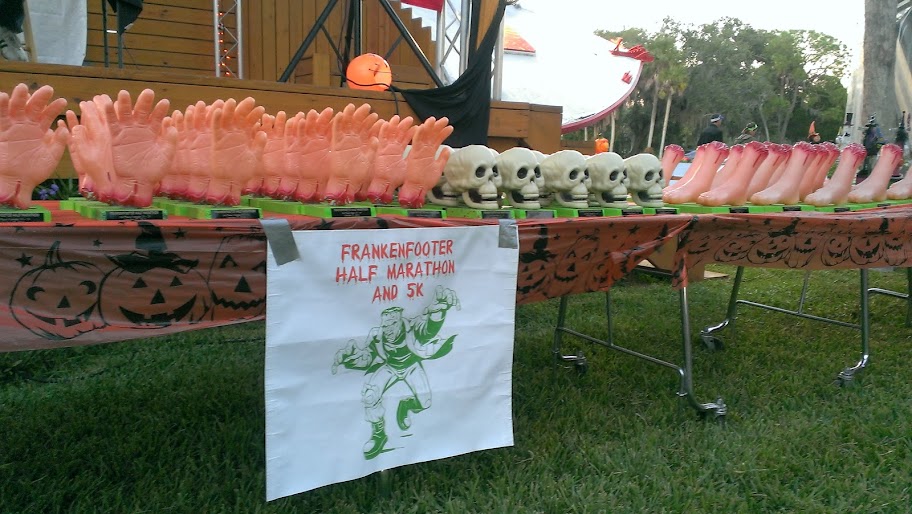 The next day, I arrived early enough to freeze my Finn compression socks off but at least I made it for the Striders’ group photo at the start.  Deciding to dress as a theme, I went as Finn and Chrissy dressed as Jake from Adventure Time.  Thank goodness, Finn wears a fuzzy fleece hat!  Although once the race started, I swapped the fuzzy Finn hat for a baseball cap. 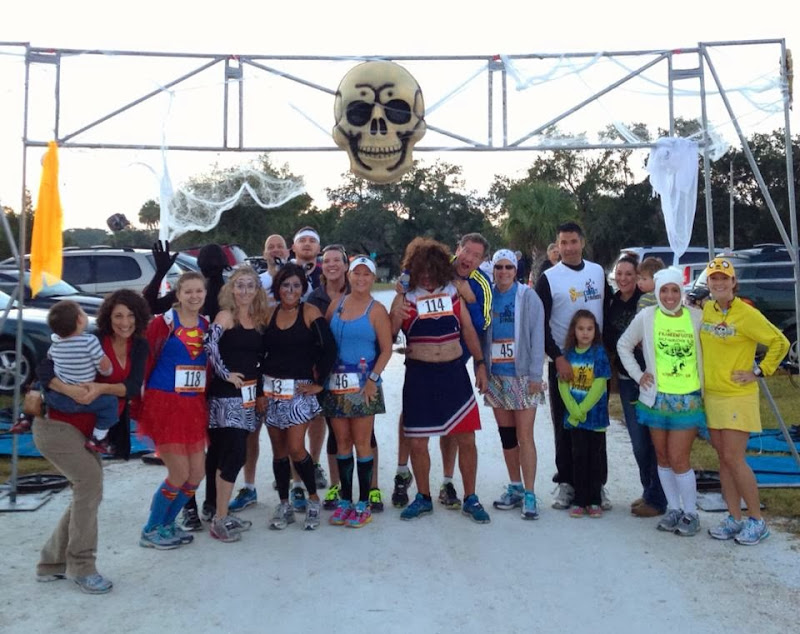 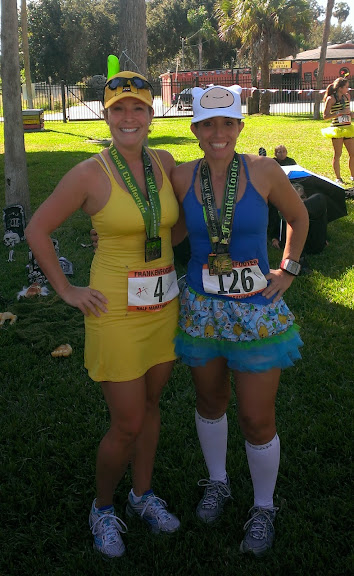 With 20 minutes to spare before the start of the race, Chrissy and I jumped in line for the restroom, however, the line didn’t seem to move.  The crowd waiting was anxious and restless waiting to use the restroom and some people squatted behind trees.  I have peeing in public issues and I couldn’t take advantage of the trees like others.  (I have pee envy.)  I finally made it into the stall at 7:58.  Two minutes is plenty of time to pee!

Once we emptied our bladders, we bolted over to the start. With the weather being so cool, my muscles were cold and I failed to stretch them before the start.  I should have performed some callestics while I waited in line to stretch my muscles to ready them for the race, but I didn’t.

For the start, we followed the limestone path once again out of the park.  I tried to pace with my friend, JM, and maintain an 8:30 pace.  About a mile into the course, I couldn’t stay with her and I fell back to a 9 mm pace. 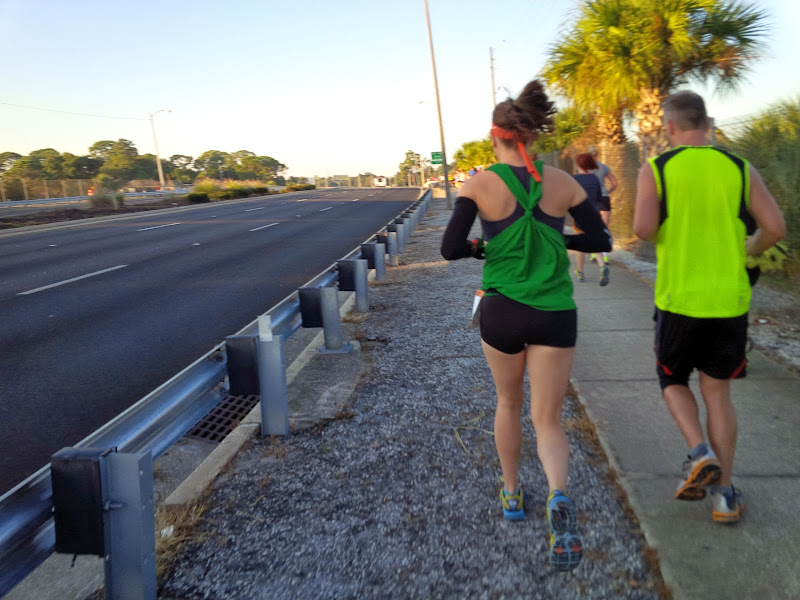 The course led us along Highway 19 and turned down Pier Road.  I really enjoyed running through the scenic streets and exploring the residential neighborhoods along the Gulf.  Even though I grew up in this area, I discovered lots of fun little parks along the way that I never knew about and my kids would love. 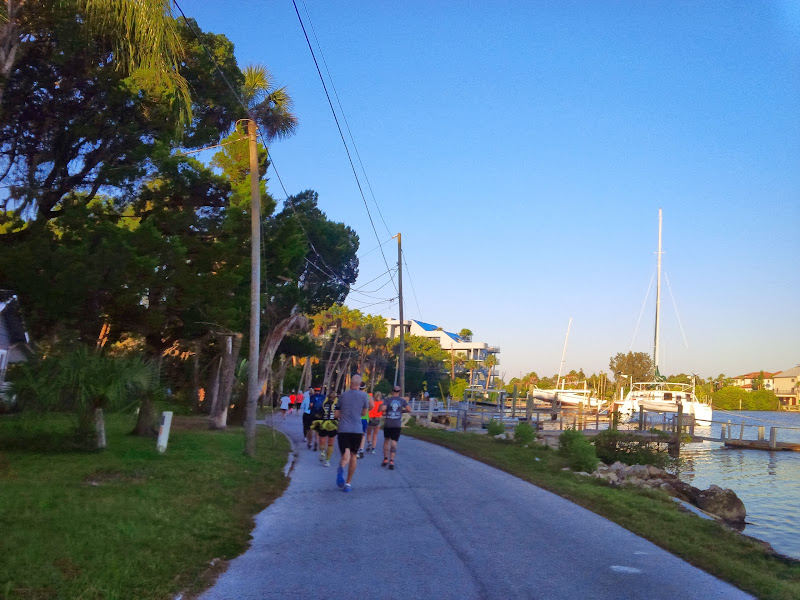 About 6 miles into the race, I began to feel the effects of not stretching.  My hamstrings were aching.  I walked the water stations but still never stopped to stretch.  Even though I needed to slow my pace down, it looked as though I could still make my two hour finish time.

Around mile 7, Chrissy caught up with me and then passed me.  I couldn’t keep a 9:30 pace and I watched Chrissy pull away from me.  We passed each several times along the course and she looked so strong.  She was going to make her goal.

I seemed to be a few minutes behind Mike, playing the role of a zombie cheerleader for the Halloween themed-race.   I enjoyed watching him attack other runners and spectators.  Watching Mike play zombie took my mind off my hamstrings. 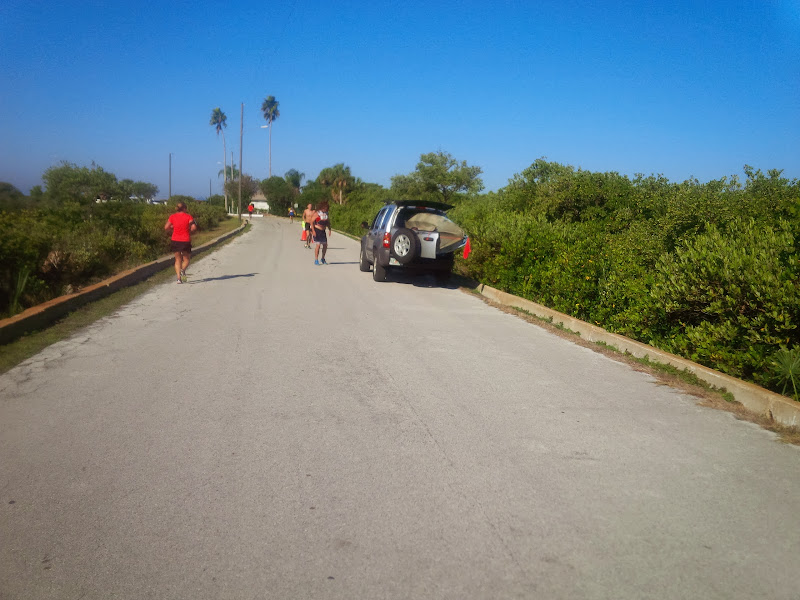 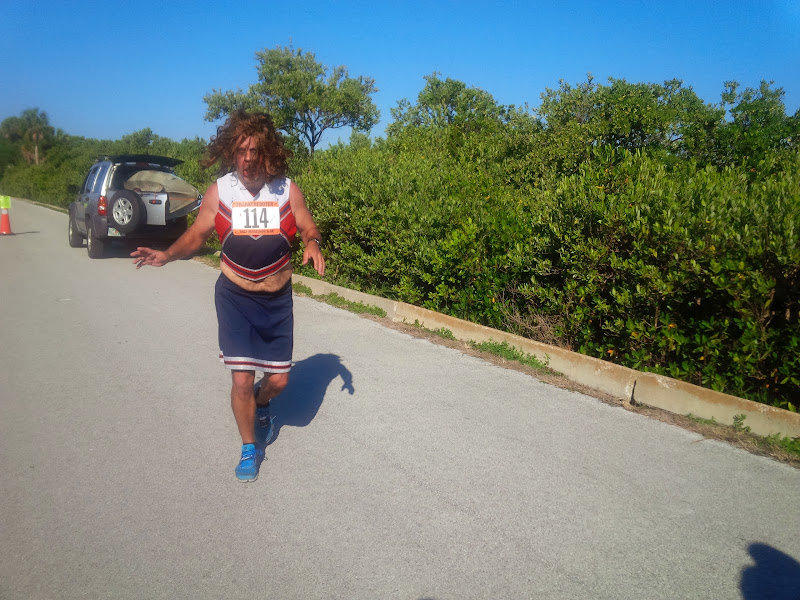 When I hit mile 10, I realized I wouldn’t beat my PR and I became frustrated with myself.  Even with all that speedwork and training, I wouldn’t hit the two hour mark.  It just made me so sad and disappointed with my performance.  I decided to shake off the sadness and disappointment and focus on the runners around me.  I cheered for the runners as they passed me on the return trip.  Was anyone else struggling like me? 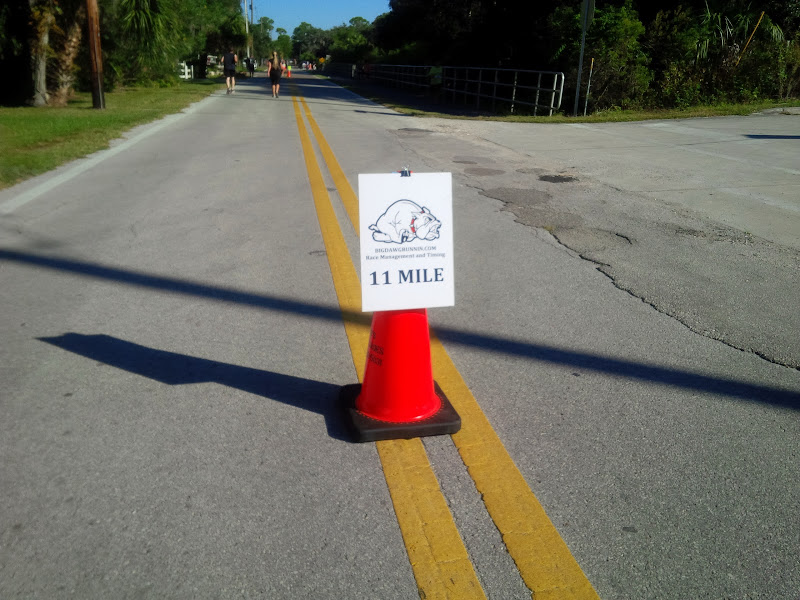 Around mile 11 the course continued with more turns through harborside streets, I tired of all the turns and I wanted to be finished.  I took one last walking break at the water station and decided to try and push my pace back to a 9:30 until I crossed the finish line. 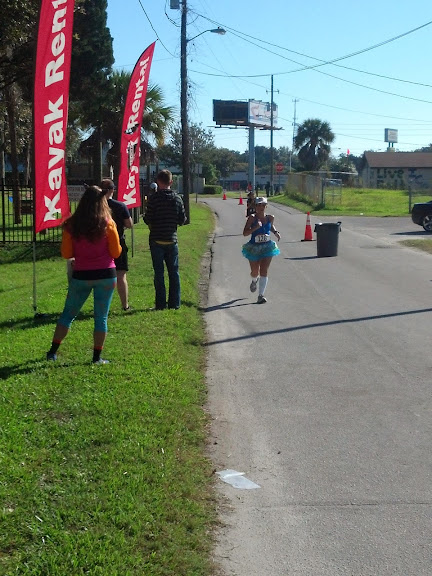 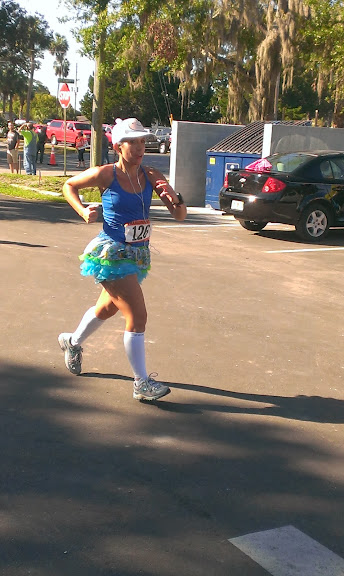 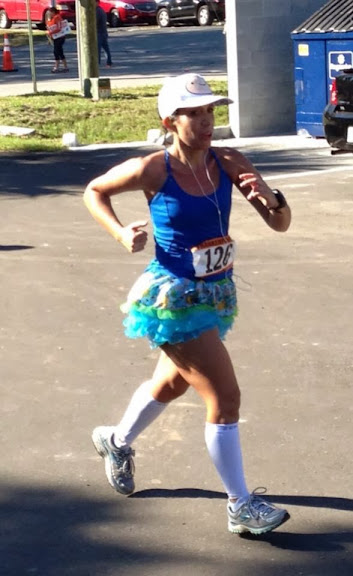 I heard the Striders cheering for me, but then I saw the clock and I tried not to cry. 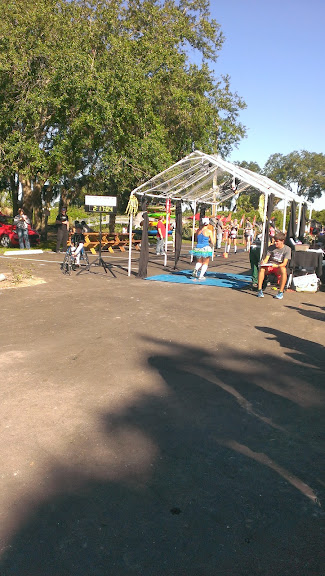 I don’t know what hurt more my disappointment of not beating my PR or my hamstrings.  After a few congratulatory hugs from the Striders, I hobbled and limped my way over to the massage therapist.  I hurt physically and emotionally and I just wanted someone to make the feelings go away.  Even the free beer couldn’t cheer me up as I felt nauseous.  I couldn’t even stomach the idea of beer. 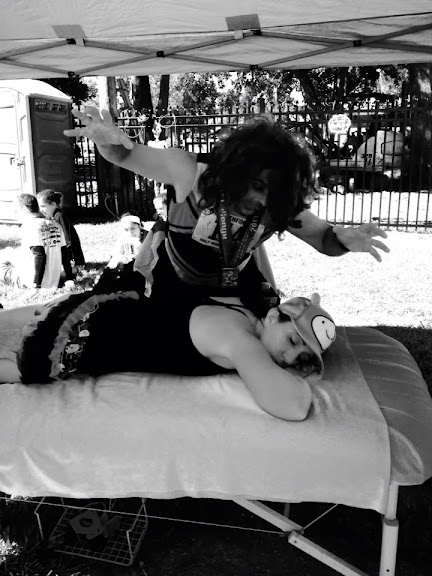 Unbeknownst to me, a zombie cheerleader tried to eat my brains druing my recovery massage.  Isn’t there a horror flick rule that states “Never fall asleep or you’ll die”?  After the massage, I felt so much better but I still couldn’t stomach a beer.

Despite my own issues, I really did enjoy the new race location and its course.  I hope the Frankenfooter enjoys its new found home, because I’d like to finish the half marathon again next year with a PR and an ice cold beer.