When the alarm rang at 4:15 a.m., I wondered why I agreed to do this.  What was I trying to prove?  As I sluggishly moved throughout the house preparing for my race, my snail’s pace was not a good indicator for my performance at the race.

At 5:00 a.m. SHARP, I met the other Striders at the supermarket parking lot to follow the caravan down to St. Pete.  Jackie rode with me to keep me company, but enjoyed her company too much and somehow we lost the caravan on the parkway.  Actually, we managed to be ahead of the caravan thanks to my handy-dandy automatic toll transponder.  (I wasn’t speeding HONEST!  Those nifty little gadgets really do save you some time, in case you ever wondered.)

A jittery Jackie went into a panic worrying that she would miss her half-marathon because of my scenic route through St. Pete, but we arrived in plenty of time to use the port-o-potties more than once.  Unfortunately, we never did find the other Striders for the obligatory photo opportunity to prove we actually were there.  But not to worry! In true Run DMT style, I had my camera to capture every Kodak moment.

The 5K bib numbers started in the 8000s, so our corral began at a rail behind the last half-marathoners.  I stood and waited right at that rail until the start of the 5K.  I’ve never been at the start of a crowd, so it was pretty interesting to watch the whole process.  Once the half-marathon started, the 5K crowd waited behind the rail for another 15 minutes.  Then, the volunteers moved the railing but continued to hold us back with a rope and slowly walked us to the start line, like cowboys lassoing cattle.  Once at the start line, the volunteers dropped the rope and we waited for the foghorn to sound for the start of the race. 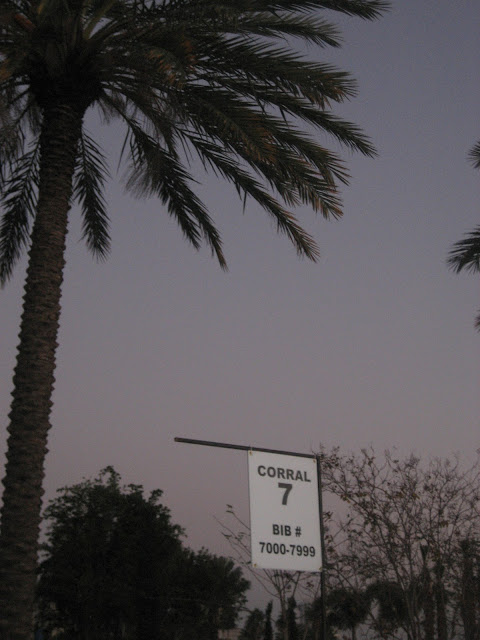 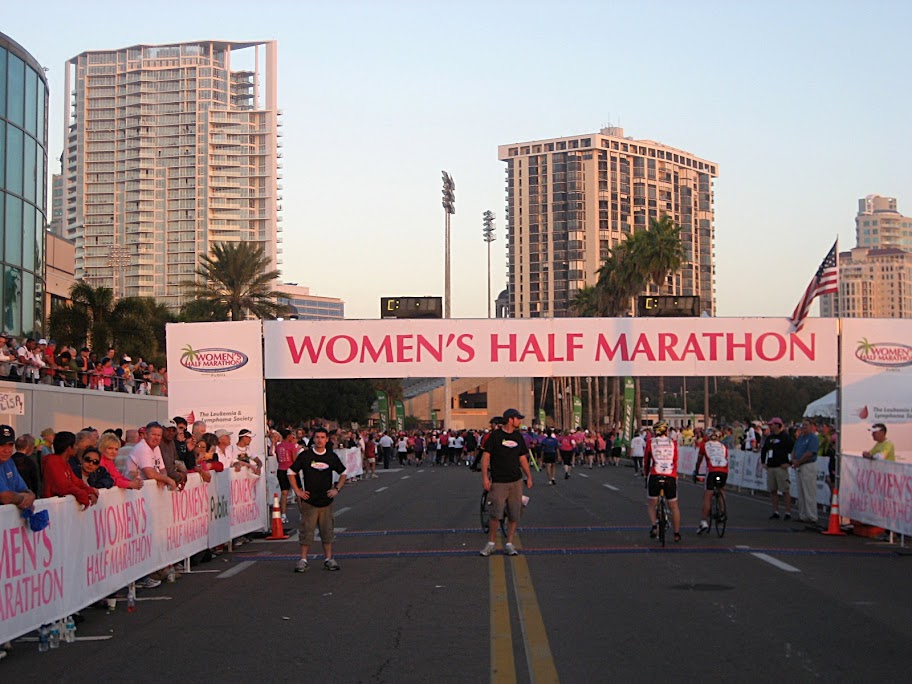 When the horn sounded, I took off at slow and steady pace, which allowed me to admire the gorgeous St. Pete scenery.  I detest the long drive to downtown St. Pete, but once I am there, I love the backdrop for a race. 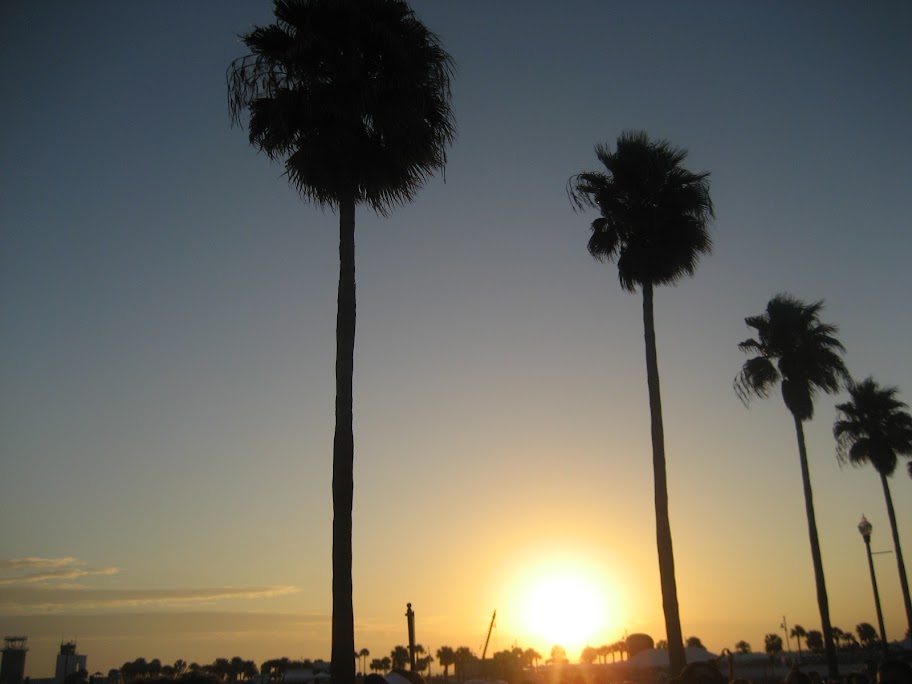 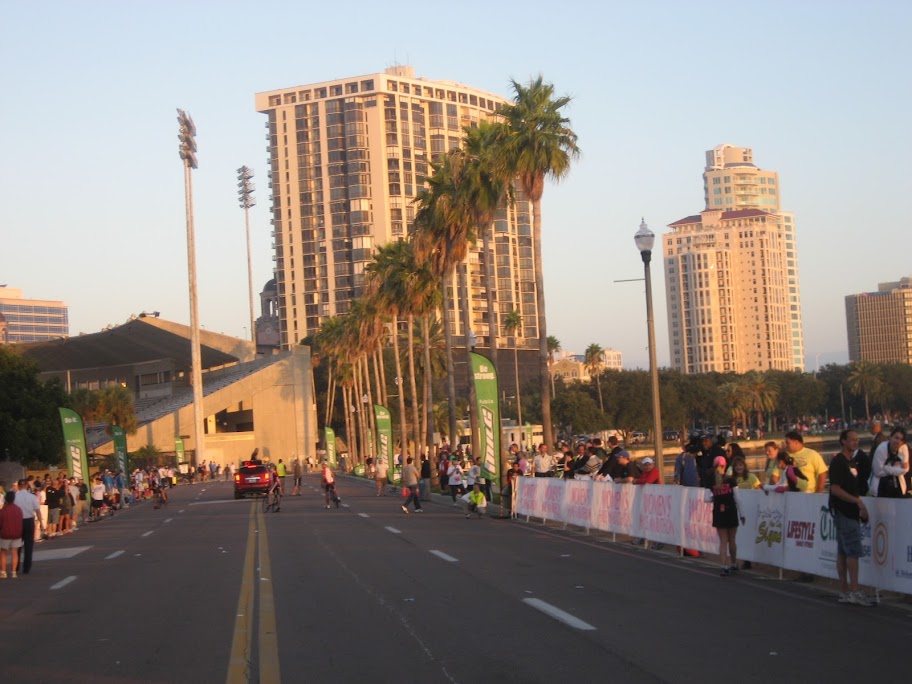 For my first postpartum race, my goal was to finish under 40 minutes and at mile 1, it seemed I would be able to achieve that goal.  I forced myself to run that full first mile or so.  Once I caught site of the water station, I needed to walk for a bit. 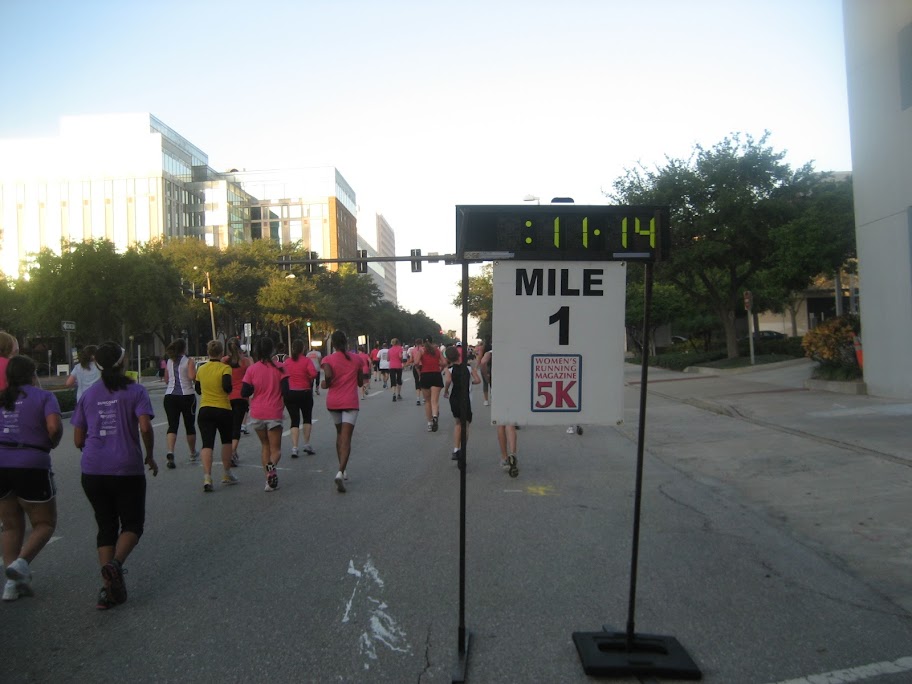 Mile 2 appeared the other side of Mirror Lake and I seemed to still be right on target for my goal.  I quickly took a picture of the clock and forced myself to run to the water station again. 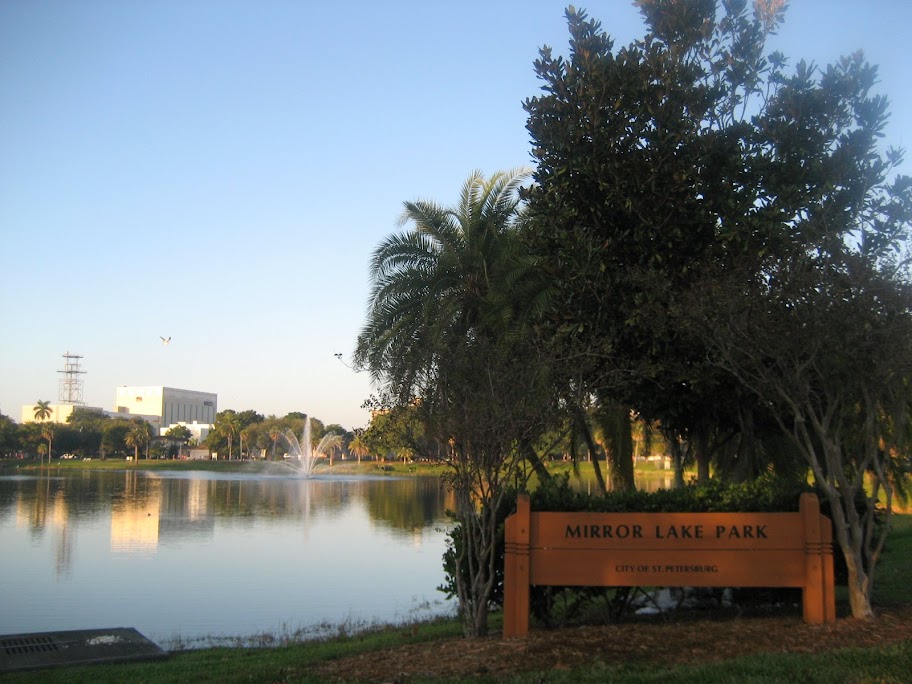 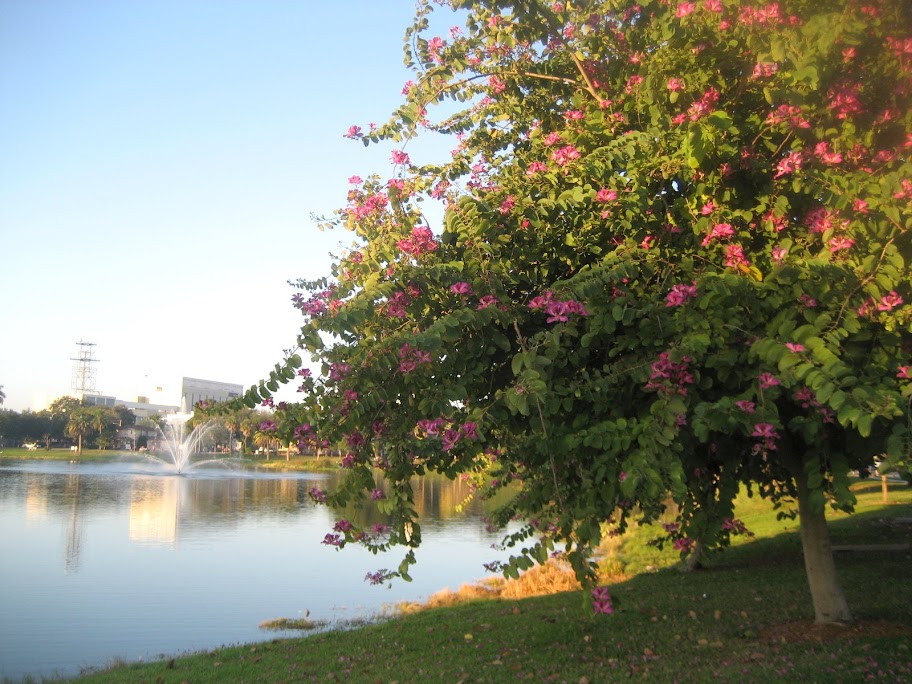 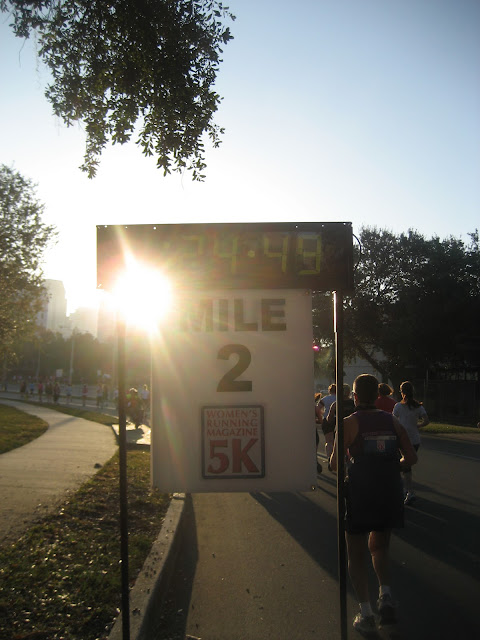 Mile 3 popped up around the bend after the water station.   At that point, I tried to run my strongest to the finish line. 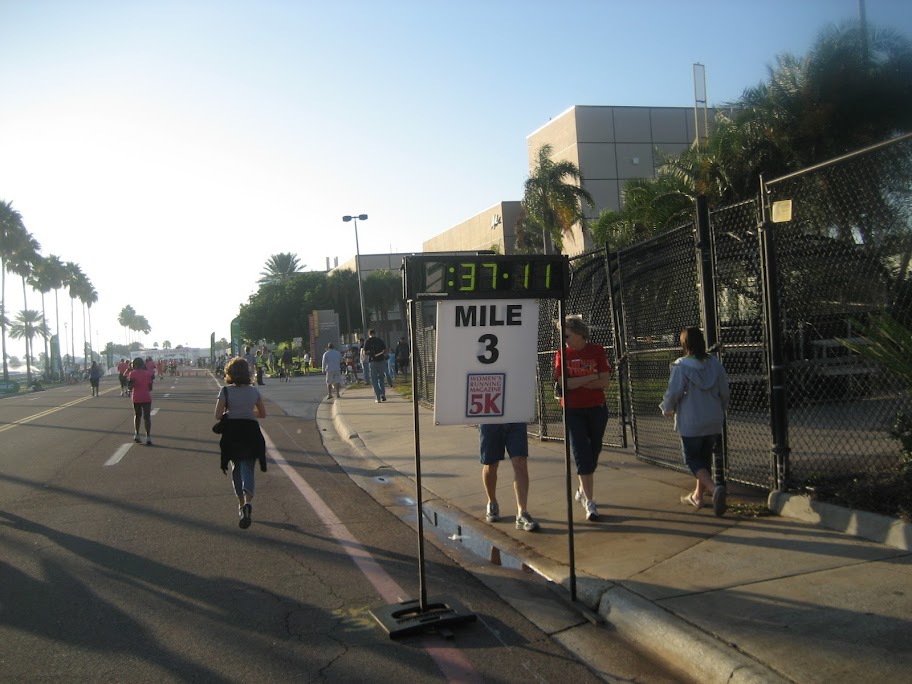 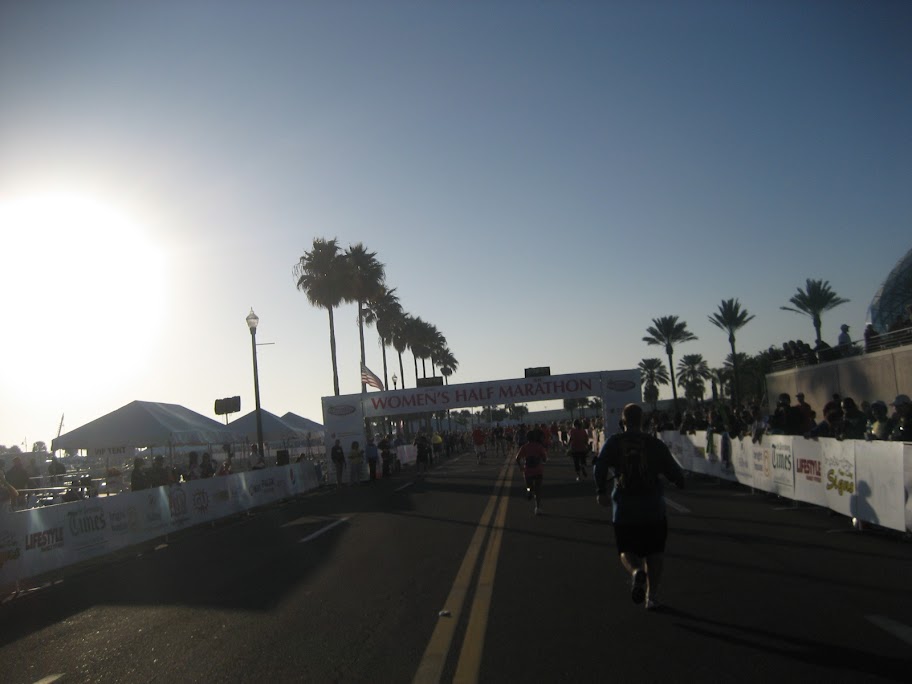 After crossing the finish line, I took some more random photos, but I didn’t stick around to cheer for my Strider running in the half-marathon.  I was too tired and I had a long, lonely drive back home.  After running in so many races with so many friends, it was an odd feeling not to have anyone there rooting for me.  I didn’t like it, but I did love how it felt to finish a race again. 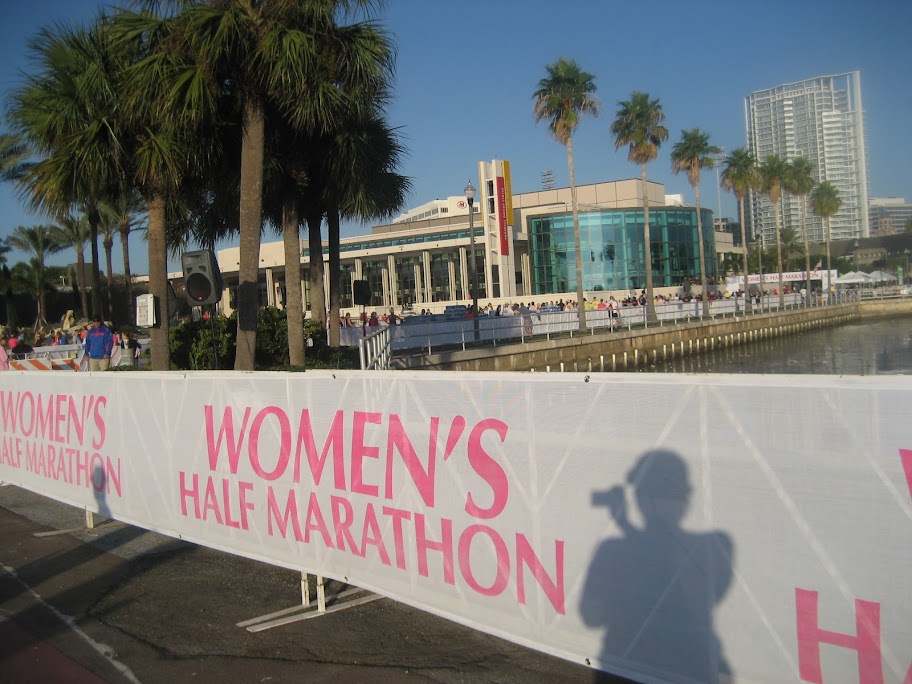 While I snacked and snapped a few more photos of me and my shadow, I met a woman who ran her first race at 65 years young.  Marcia’s friends and husband wore t-shirts proclaiming their love and admiration for her achievement.  We exchanged our small victory stories and while chatting with her, I remembered one of my favorite quotes that Lori shared with me just a few days before the race.

“The miracle isn’t that I finished. The miracle is that I had the courage to start.” – John “The Penguin” Bingham

Hosted by Cecily and Lolli