After watching the Boston bombing events unfold, Chris Lauber, a local race director known for his well orchestrated Florida Road Races, decided to “do what he does best”.  On May 8th, only three weeks after the Boston marathon, he organized a 2.62 mile run at St. Pete Pier to honor the lives lost, the injured and the athletes. 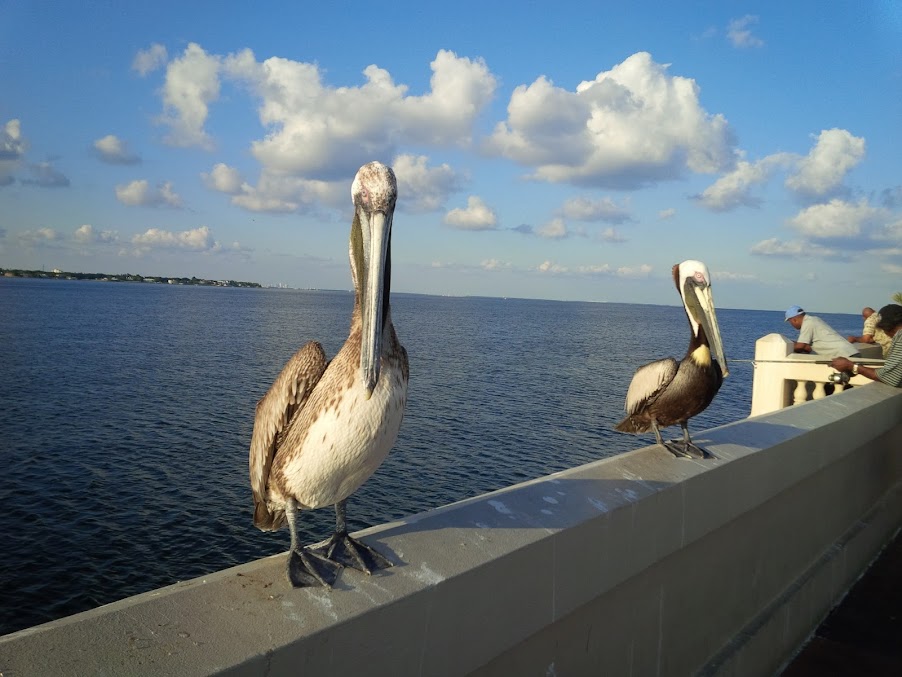 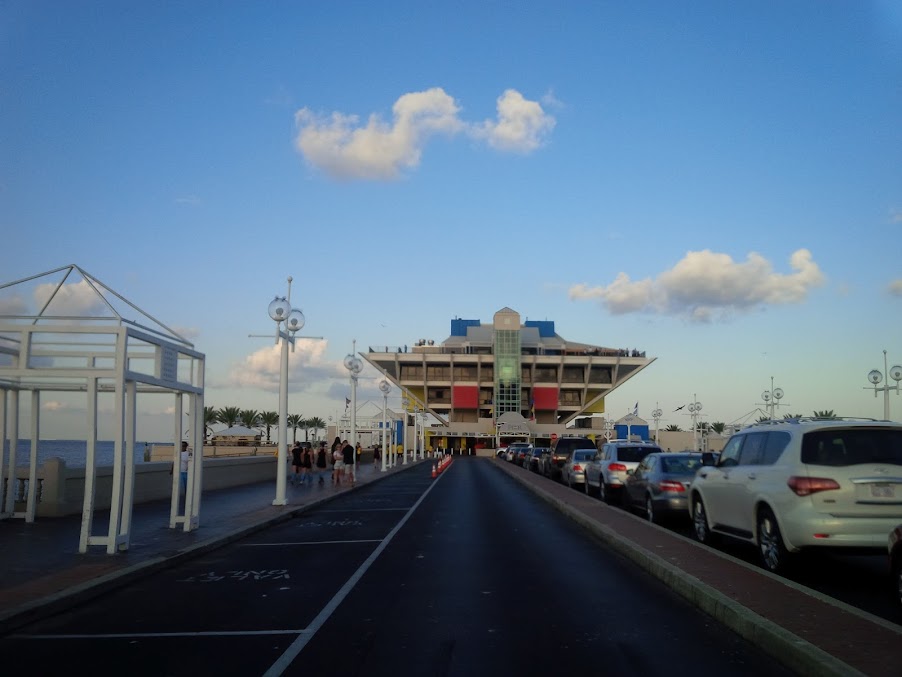 Only Lauber and his wonderful team could make a last-minute run look effortless.  To keep costs to a minimum while donating as much of the $26.20 race fees to One Fund Boston, the run lacked the usual amenities we’ve come accustomed to at many of Florida Road Races, mostly the food and the beer.

Each participant received a t-shirt and a LED candle for the pre-race candlelight vigil. 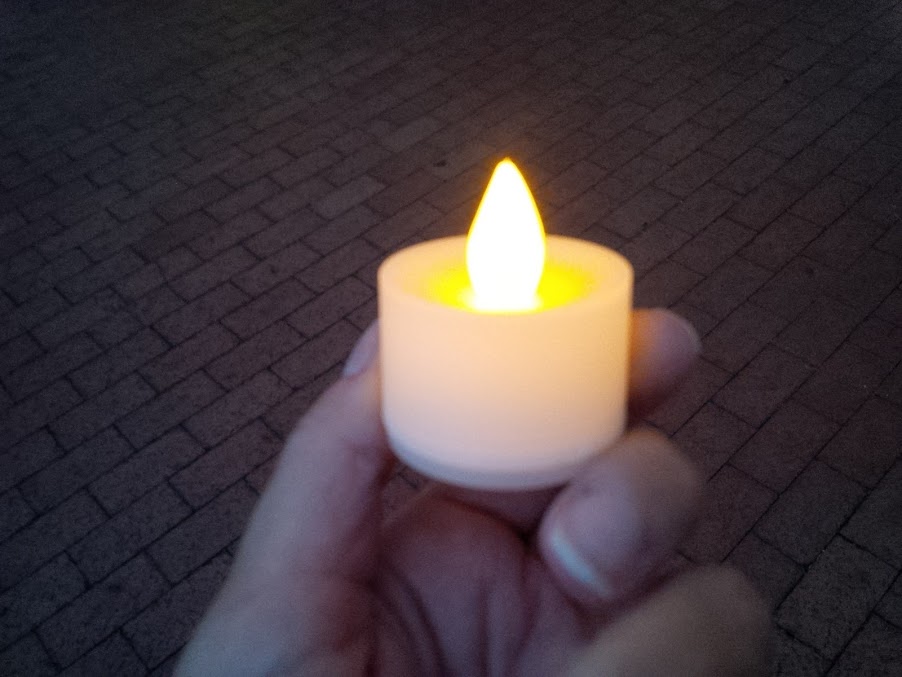 Several of my Suncoast Strider friends were there to show support for Boston and our love for our own Boston Marathoner, Marcia. 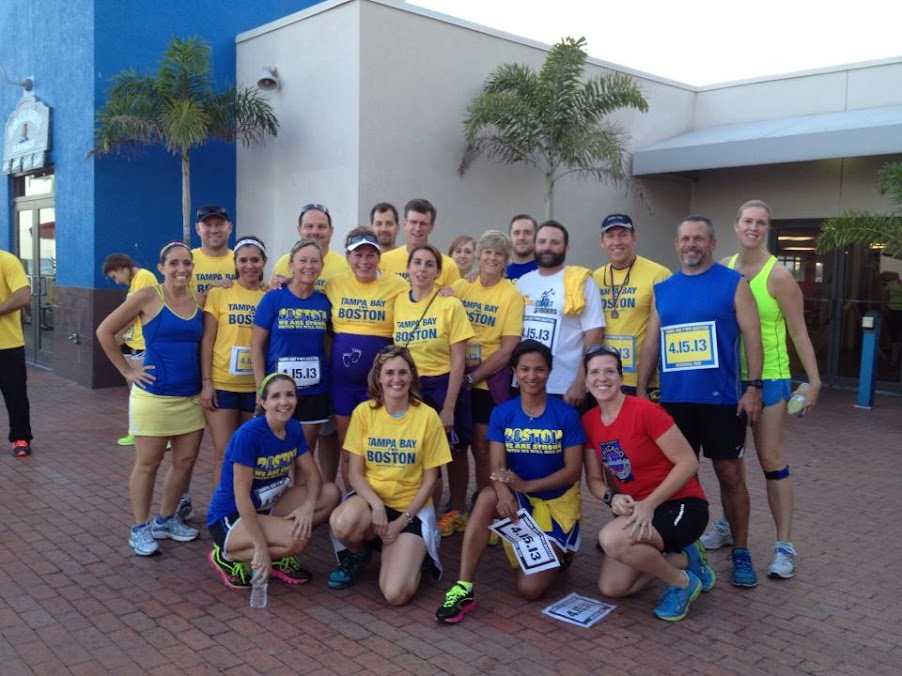 Prior to the memorial run, Heather, Suzan and I made silly marathon remarks about hitting a wall around 2.5 miles.  As the evening progressed with little water and food in our stomachs, we would fail to see the humor in those jokes.

In the pre-run presentation emceed by Serina Fazan of ABC Action News, race directors and runner after runner shared their Boston Marathon memories of that fateful day. 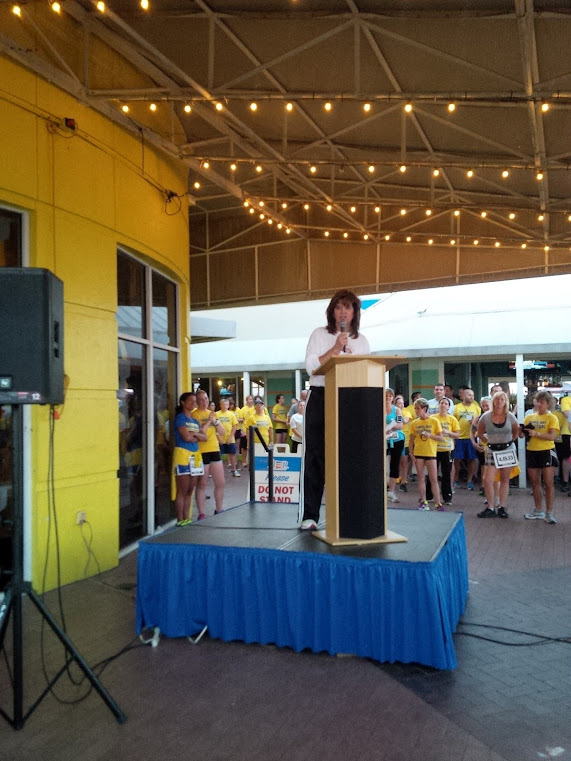 Some athletes finished under 3 hours while others never saw the finish line.  Some ran for their first time and a few speakers had several Boston marathons under their fuel belts. 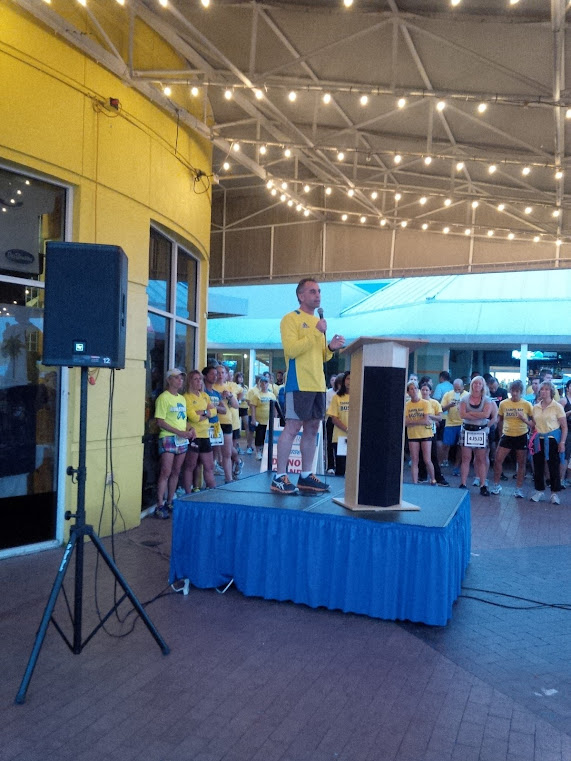 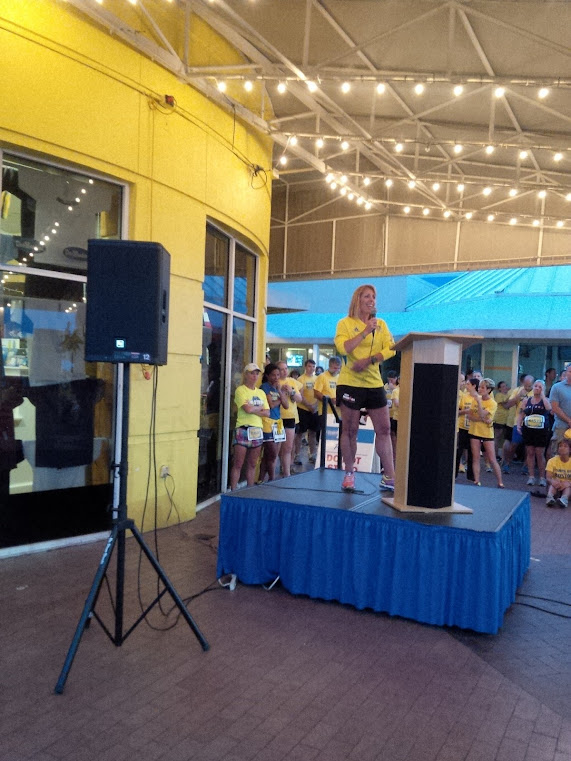 Except for Marcia who joked about not liking the race, each runner all shared their love for Boston, a dedication to return and why it’s more than a marathon over a century old that separates elite athletes from your average runners.  Boston is a marathon experience like none other and as I listened to runner share their stories, I longed to be part of it. 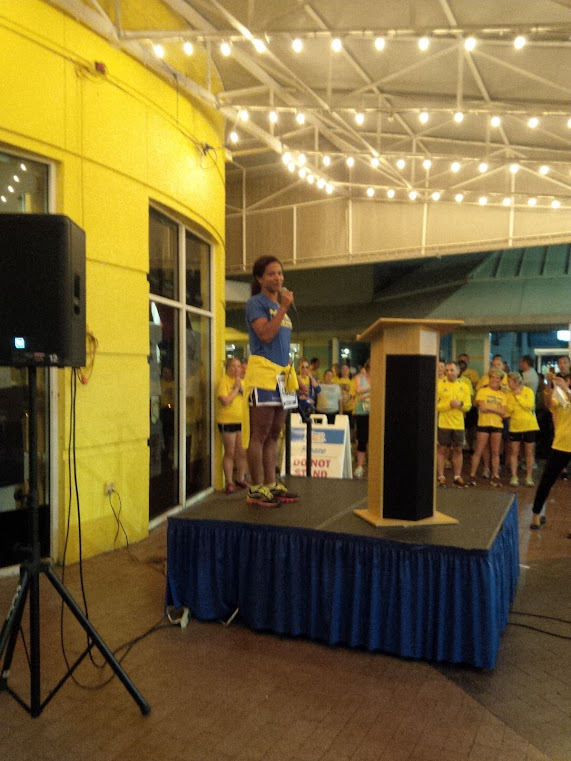 With each account, the theme of the evening was evident.  Runners are strong and we will always band together for a cause to do what we do best.  “Run and move forward.” 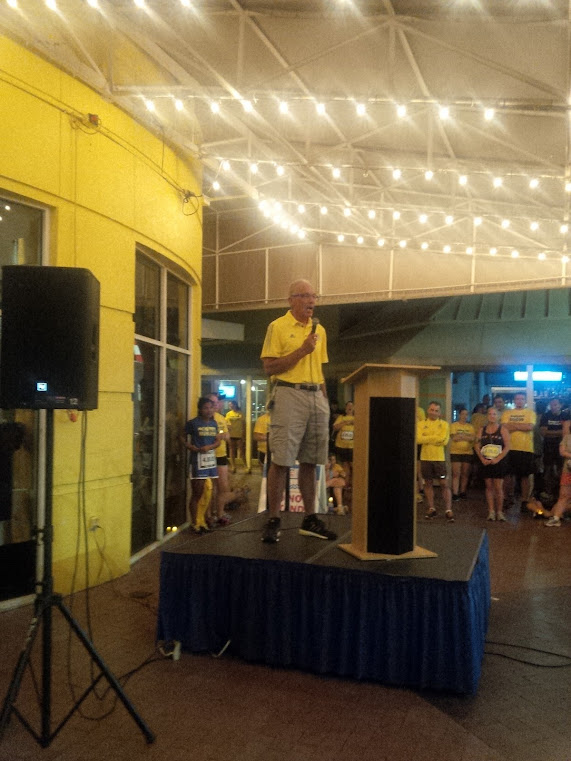 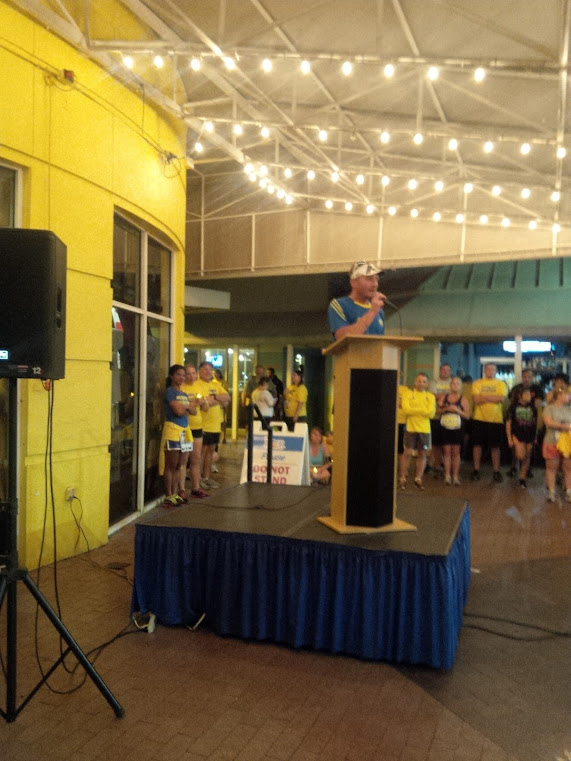 As we stood for two hours, the twinge in our backs and legs tested that strength and reminded us to be Boston Strong.  As our legs and back began to ache, we heard one last account told by David Green, a marathoner who finished the race and snapped a photo just after the second bombing, which helped identify the second suspect.  His heroic act and bravery made us proud to be Americans and runners.

After singing the National Anthem, we left St. Pier with our candles still glowing and ran towards the Vinoy Hotel.  The turn-around point was just past Vinoy Park. 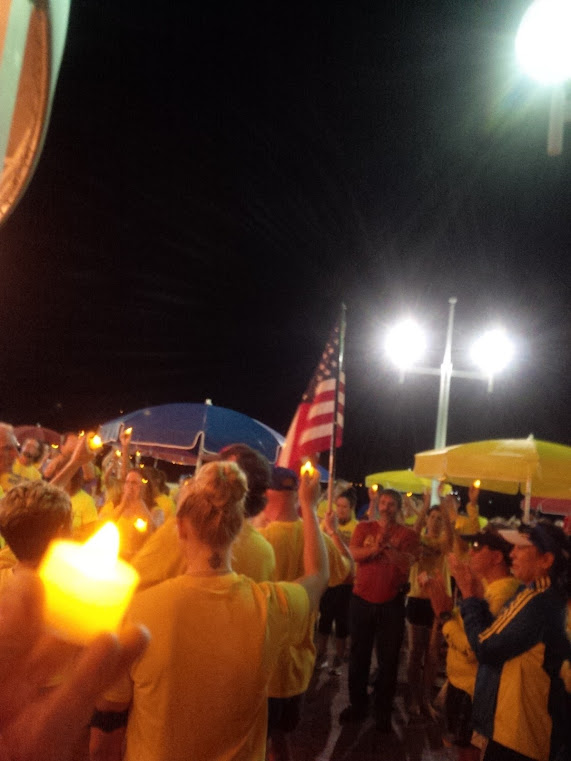 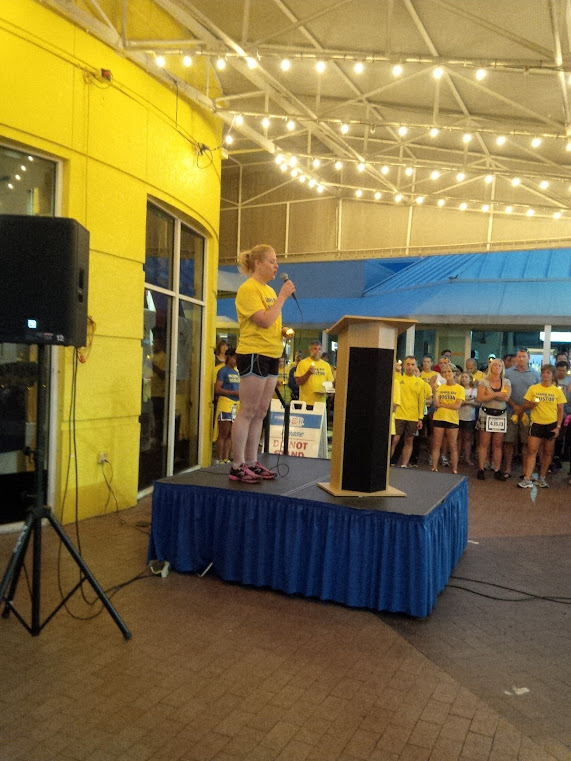 The long evening took a toll on me and I had to walk more than I would like for a less than 3 mile run.  The lack of water also caused me to experience side stitches.  But this run wasn’t about time, conditions or a PR. It was about being part of something bigger than myself and to show my support for Boston and those who were there.

I was proud to be part of Tampa Bay for Boston and next year, I hope to be able to give more by volunteering at the Boston Marathon 2014. 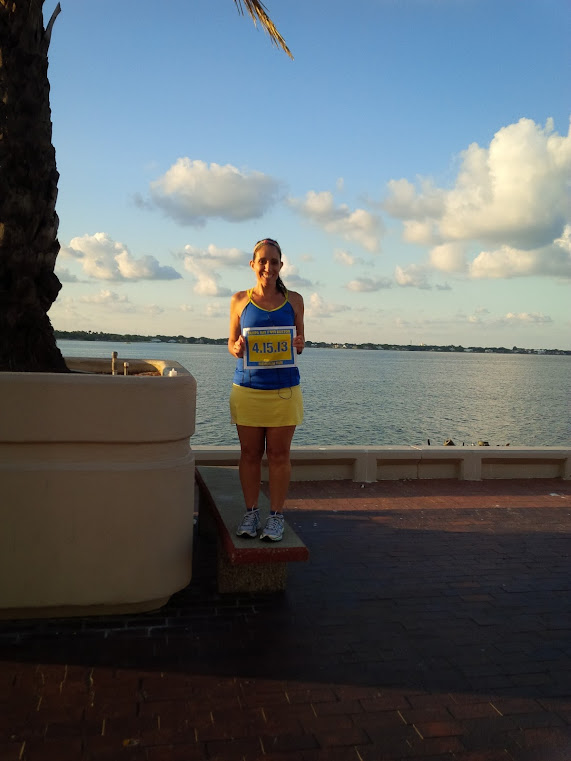