Disclaimer: The Straz Center provided me with two tickets to Once in exchange for my honest review. The opinions shared are my own.

Since my husband plays eclectic folk music finger-style acoustic guitar, we were already huge fans of the music of Once.  Having won a Tony® for Best Musical, obviously we weren’t the only fans of this love story and its original score.

At first glance, the simplicity of the pub-esque set may seem less glamorous than the usual Broadway productions that roll through the Straz Center.  The absence of an elaborate LED screen or monolithic structures allows the music and dialogue to tell the story rather than relying on set design.  Presented as an off-Broadway appearance and feel , Once uniquely connects with the audience through music and shares its story at a much deeper level which I have yet to experience since Rent.

And connection is key with Once. Even before the curtain goes up, the cast interacts with the audience in a pre-show jam session.  Audience members are invited on stage before the show for a pint and encouraged to clap and stomp along to the distinctive Irish-Czech folk sound. 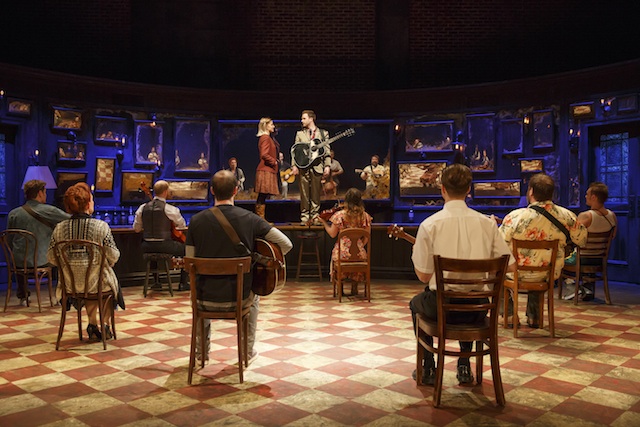 ONCE Tour Company and the cast – Photo Credit: Joan Marcus

You read that folking right. For this Once in a lifetime experience, the audience is welcome to drink on stage with the cast and partake in the folking merriment.  As truly folking incredible as it was, we were not permitted to take photos for folk’s sake. 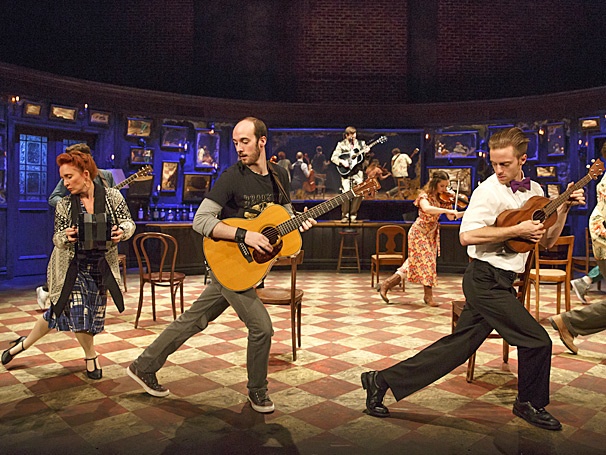 ONCE Tour Company and the cast – Photo Credit: Joan Marcus

Eventually the merriment drinking jam session on stage ends and the ushers lead the audience back to their seats, but the music continues.  As the music changes tempo and slows to create a more melancholy mood, the cast transforms into a musical curtain call and moves the audience into the first scene.

Throughout the production, the entire cast remains on stage playing multiple roles as actors, stagehands, the chorus and orchestra.  Each ingeniously choreographed number incorporates musical interludes to create scene changes.

Once loosely follows the storyline of the movie of the same name, but the stage production is rich with witty one-liners to add some light-heartedness to this heartbreaking love story.  Despite its clever comedic timing, Once is better known for the cast’s incredible choreography with instruments and its haunting soundtrack that causes your hair to stand on end.

The music painfully tells the story of “lives stopped” pining for love to revive them in the heart of Dublin.  Through their love for music, Guy and Girl help each other find the passion needed to reboot their lives and live their dreams. 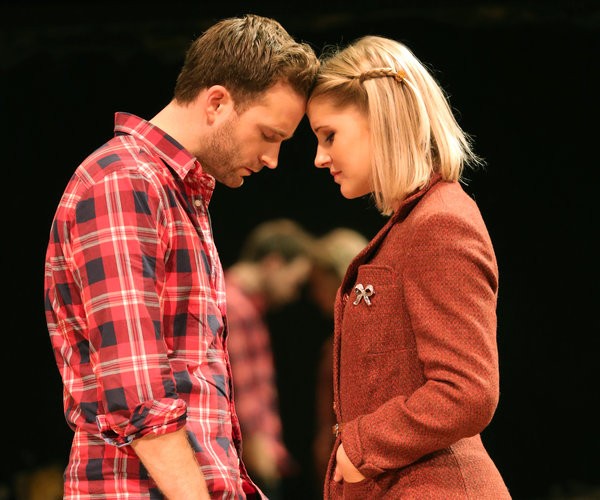 Once is only here in Tampa for a short time. Eventually the curtain will close on this folking extraordinary show.  Stop in for a pint while you can.

If you plan to join in the pre-show jam session, arrive early and bring cash for the stage bar.