Disclaimer: My family and I received tickets to School of Rock as opportunity through the Tampa Bay Bloggers and the Straz Center for the purpose of this review. The opinions shared are my own.

Since my school age days, I have always dreamed of being a back-up singer and I may have created mini backup minions in my children as we have been known to Ooo La La La whenever the musical inspiration hits us.

While impromptu singing and car karaoke concerts are common occurrences in our family, our home mirrors our music appreciation. With framed records and musical instruments festooned, our home is musical temple that regularly worships music. Yes, proudly, my children have been homeschooled in the School of Rock.

Given their knowledge and appreciation for many genres of music and musical theatre, my kids love the film, School of Rock. After all, what kid wouldn’t love the idea of unschooling a classroom and rocking out all day long? 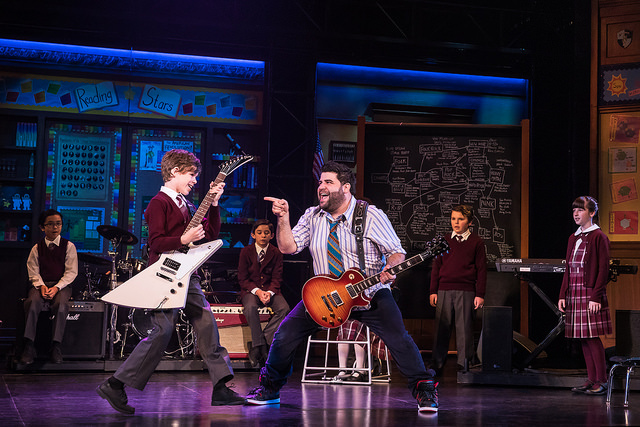 I believe my son loves it the most because Mr. Schneebly throws all the traditional curriculum out the window and develops a soulful Rock ‘N Roll education. No reading. No writing. No math, just the basic 1…2…3…4 lead into a song.

School of Rock (The Musical) follows a similar plot as the movie with some subtle changes only to round out some flat characters and add more depth to their roles.

With lasers and bellowing vocals, the show opens with a rocking live performance of No Vacancy, Dewey’s band. Much like the movie, Dewey is quickly kicked out of the band and we discover his mountainous Rock ‘n Roll dreams, but served a dose of reality when his rent is due.

To make money, Dewey concocts a ridiculous plan to impersonate his roommate, Ned Schneebly and pose as a substitute teacher at a pretentious preparatory private school, Horace Green.

Upon discovering the student’s hidden talents in a classical music class, Dewey decides to forgo conventional instruction and develop Rock ‘N Roll curriculum based on the foundation of rock history. Through their rock adventure, Professor Dewey taps into the talents of the students and encourages them to believe in themselves. 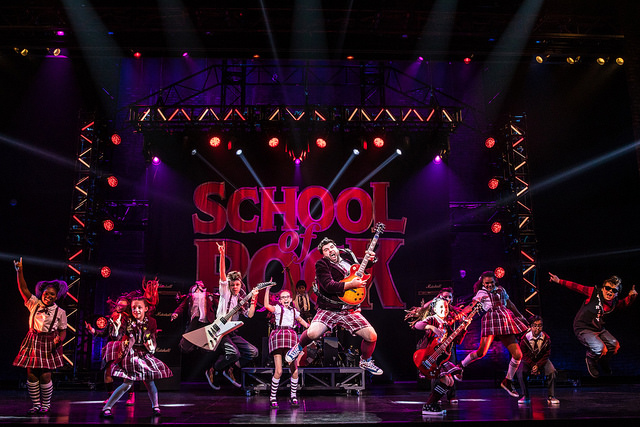 The plot of the film lends itself to amazing rock ballads beautifully composed by Andrew Lloyd Webber, which rounds out the flat film characters overshadowed by Jack Black. School of Rock (the musical) amplifies each of the players critical to the plot and spotlights their personal struggles.

Step Off from the movie morphs into Stick to the Man, the war cry of tired overscheduled, overworked private school children. Teacher’s Pet and If Only You Would Listen brings voice to often ignored trophy children. The musical adaptation of Principal Mullins and Dewey hanging out at the Roadhouse bar was stunningly orchestrated as she swooned to Stevie Nicks.

The talents of the entire cast should also be noted. Rob Colletti (Dewey) delivers the appropriate sarcasm, slap stick paired with amazing pipes. Lexie Dorsett Sharp (Rosalie) sharply plays a tightly wound Ms. Rosalie Mullins. And of course, the kids steal the show with their amazing vocals and rocking musical talents, singing and playing instruments throughout the show.

For the fact that my seven-year-old watched the entire production with wide-eyed admiration demonstrates how truly well-done School of Rock is.

School of Rock is the rock anthem for all misfits and square pegs that refuse to fit into norms. And it’s a must-see.

Enroll in the School of Rock at the Straz Center now until Sunday.