In 2015, my kids and I had the sweet pleasure of seeing Roald Dahl’s Charlie and the Chocolate Factory in the West End in London. Like pure imagination, the beloved characters from the famous Roald Dahl children’s book came to life before our eyes. An original score combined with all the delicious elements  of the novel materialized this amazing Willy Wonka world in very tantalizing way. To experience a very British musical in an authentic, historical British theatre was a true treat. 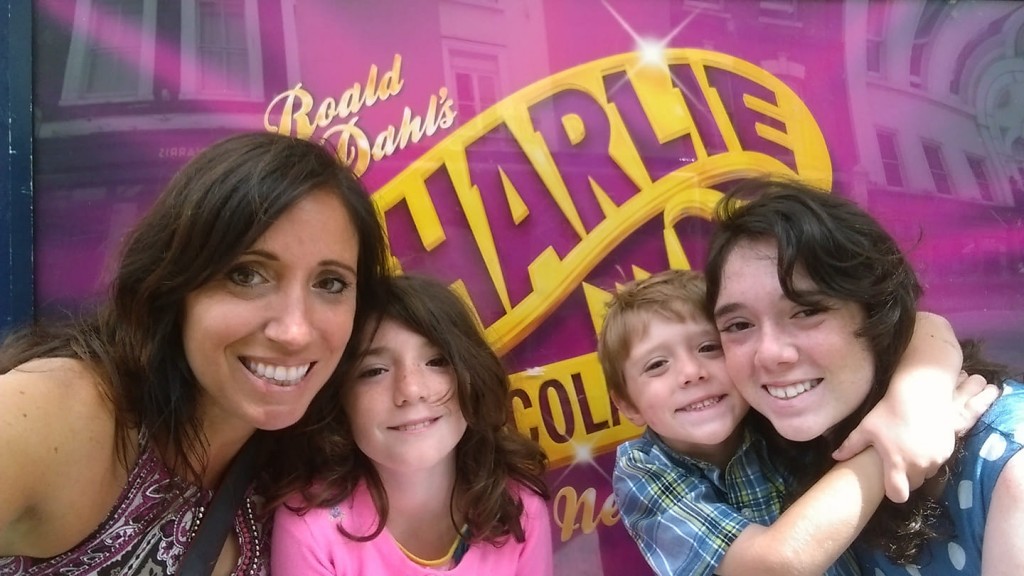 My kids and I at Charlie and the Chocolate Factory in London – 2015.

When the Roald Dahl’s Charlie and the Chocolate Factory drifted across the pond to set up shop on Broadway, I was ecstatic and couldn’t wait for the musical tour to slip into the Straz Center. I avoided all reviews of the Broadway production as to not spoil the surprise.

Four years after our West End experience, we received our golden ticket to experience the wonders of Willy Wonka all over again at the Straz Center on opening night. 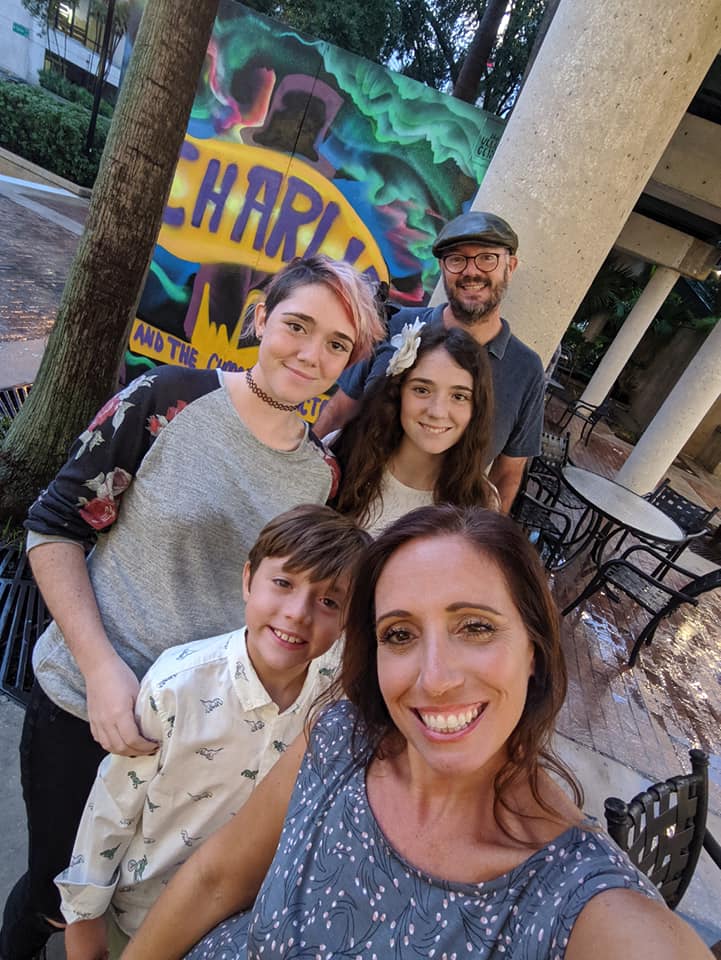 My family and I at opening night for Charlie and the Chocolate Factory in Tampa – 2019.

But how would the show compare? After all, Charlie and the Chocolate Factory is distinctly British. Would all the subtle cultural nuances get lost in translation?

Much like the London production, all of the favorite characters remain in tact, but not for long! (Spoiler!) However, the Broadway production also combines the music from the 1971 film (Candy Man, Pure Imagination) in a satisfying and delicious way. There are also a few other changes to note. 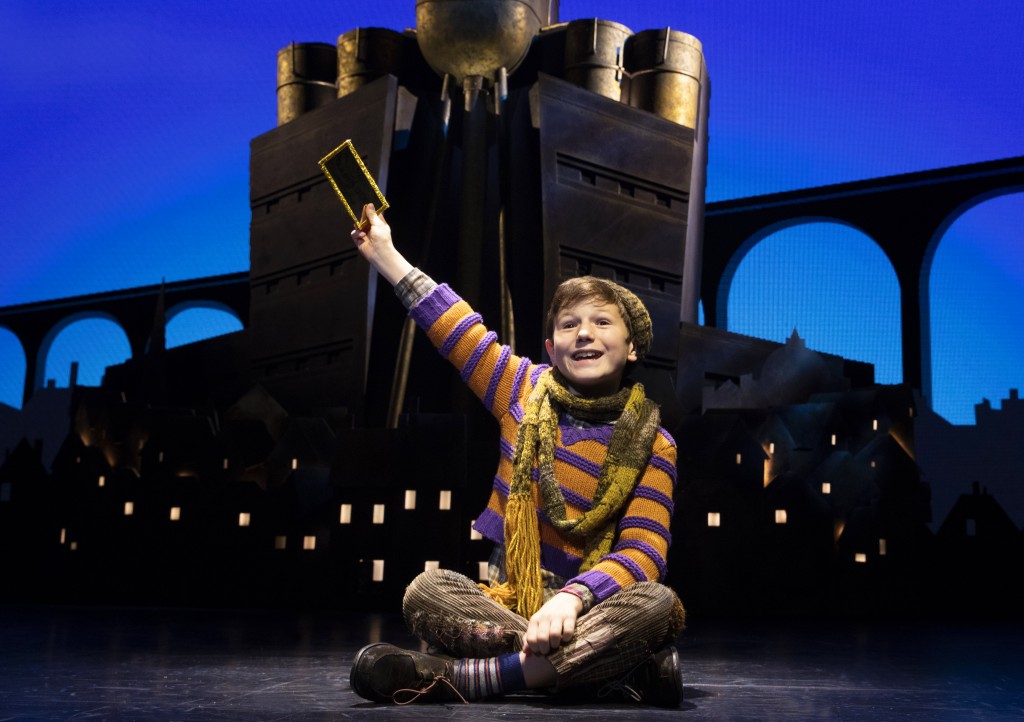 Charlie Bucket (Henry Boshart) remains the only child character in the Broadway production. Augustus Gloop (Matt Wood), Veruca Salt (Olivia Cece Tolland), Violet Beauregarde (Brynn Williams) and Mike Teavee (Daniel Quandrino) are all played by adult performers. While the performers did a truly outstanding job, I prefer children to play these parts, as in the original London cast.

In the original London score, Grandpa Joe tells Charlie the history of Willy Wonka, which ties many of the elements of the novel into the musical. In the Broadway production, Charlie shares all the glorious things that make Willy Wonka his hero. Rather than a Wonka history lesson, we learn more about his obsession for sweets and all things Wonka.

Parent roles – Strike That, Reverse It!

Much like the novel, Charlie Bucket has a mum, a dad and four bedridden grandparents in the London production. However, Dad is a no-show in the Broadway production and no explanation is given as to what happened to him. And oddly, despite taking place in London, no one has a British accent.

Whether it’s the London production or the Broadway production, you will appreciate some diversions from the novel or famous films. For one, Violet Beauregarde brings some much needed diversity to the cast of previous characters. This bubblegum chewing star explodes onto the scene with a soulful, hip hop number as the “Queen of Pop” (known as the Double Dutch Duchess in the London production) and certainly adds some much needed flavor to the classic children’s novel.

Augustus Gloop remains the beloved sausage stuffing, chocolate slurping slob, however, Veruca Salt adds a new twist by blossoming into a Russian prima ballerina debutant brat, which works perfectly for the storyline. No matter how you slice it, Veruca is still just a bad nut.

Charlie remains the adorable unlikely hero and Willy Wonka (Noah Weisberg), the lovable yet, sadistic chocolatier ridding the world of horrible humans one child at a time.

While there were some differences between the performances, the valuable lessons learned from the novel are all beautifully mixed into production, such as the meek inheriting the earth and good things come to those who wait and believe. 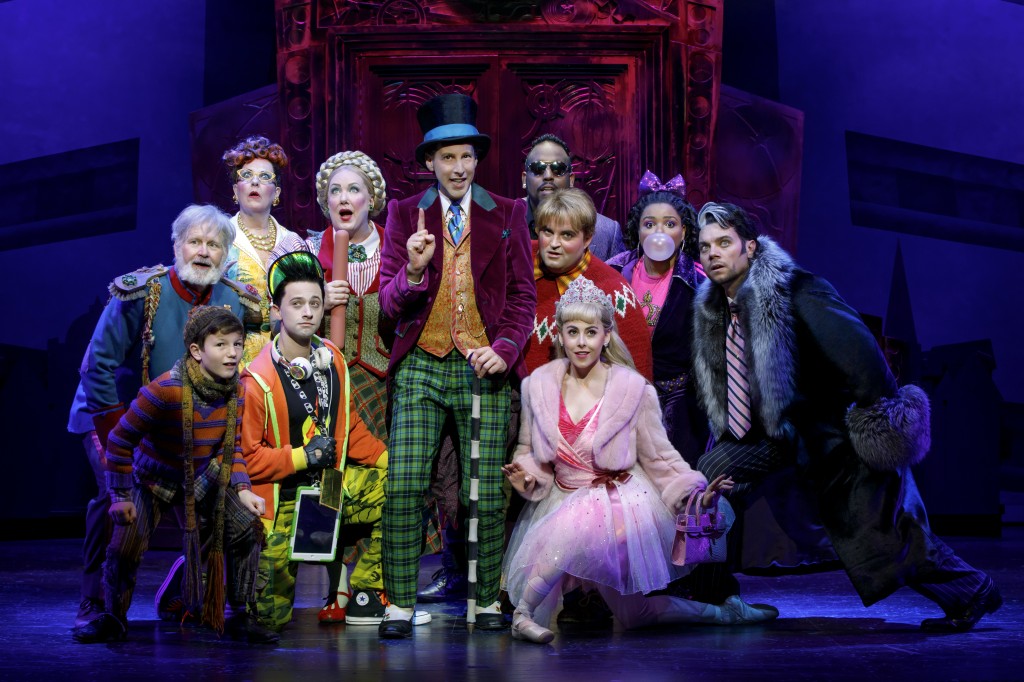 For the Roald Dahl fans, the visual presentation of the novel will be beyond your wildest dreams. The costumes, particularly the Oompa Loompas, and set design convey the wonders of Willy Wonka and his chocolate factory in such a magical and imaginative way.

Despite its differences from the London production, my family and I relished in experiencing Roald Dahl’s Charlie and the Chocolate Factory once again. We thoroughly enjoyed it.

Savor in the delights of Roald Dahl’s Charlie and the Chocolate Factory now until Sunday, October 13. Visit www.strazcenter.org for showtimes and tickets.