Ah, dirrty (dirrty)
Filthy (filthy)
Nasty, you nasty (yeah)
Too dirrty to clean my act up
If you ain’t dirrty
You ain’t here to party (woo!)

What better way to recap the Pretty Muddy race than with a help from Christina Aguilera!

As I’ve mentioned in a previous post, a mud run was never something I thought of trying.  Fear of over-the-top tests of endurance, electric fences and well…mud mostly steered me away from ever participating.  I had heard horror stories from friends who found mud in the nether regions for days after their mud run.

But when Courtney of Journey of a Dreamer challenged her fellow Sweat Pink Sisters to take on the Pretty Muddy, I simply had to go for it.  Who can resist a good challenge? 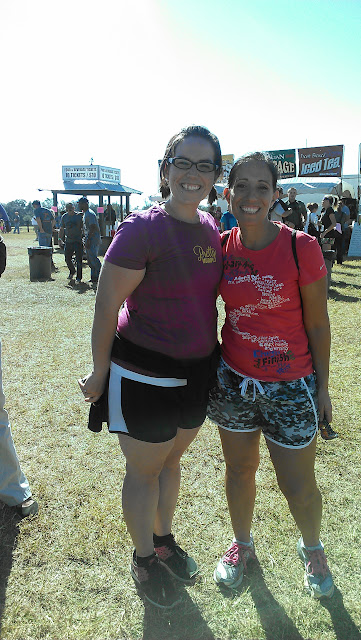 Obviously there were mass quantities of mud, but Pretty Muddy lacked an electrical fence which was a bonus for me.  Plus, there was a promise of beach balls and bubbles instead of bales of hay.  So with that, I would give it a go and I decided to make “Keep Calm and Get Pretty Muddy” my mantra. 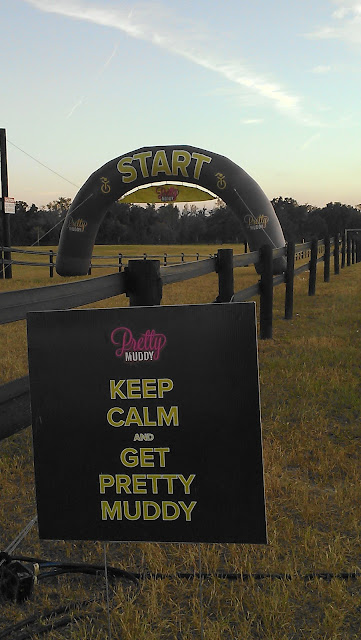 The Friday before the event, a few fitness bloggers and I had the opportunity to preview the course.  I even tested out a few of the obstacles to see if I could even scale them. 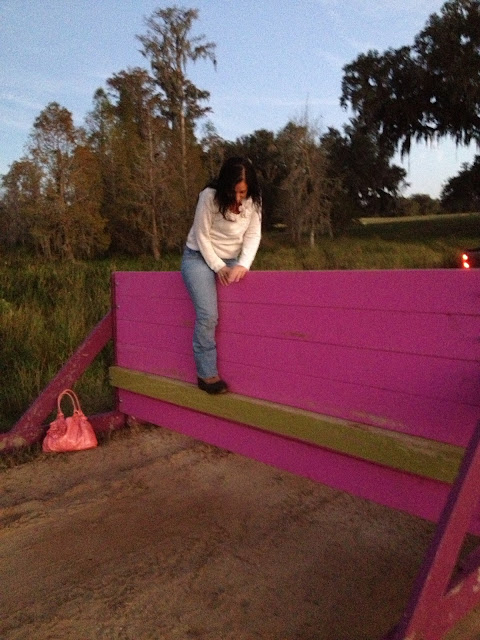 Each obstacle offered a “pretty please pass”, however, for me to truly understand the whole mud run experience, I felt I had to at least attempt the obstacles even if it meant falling face down in the mud.  Either way, it would all make for a great blog post and interesting race recap.  Given my race number, I was doomed destined to have a hell of a time. 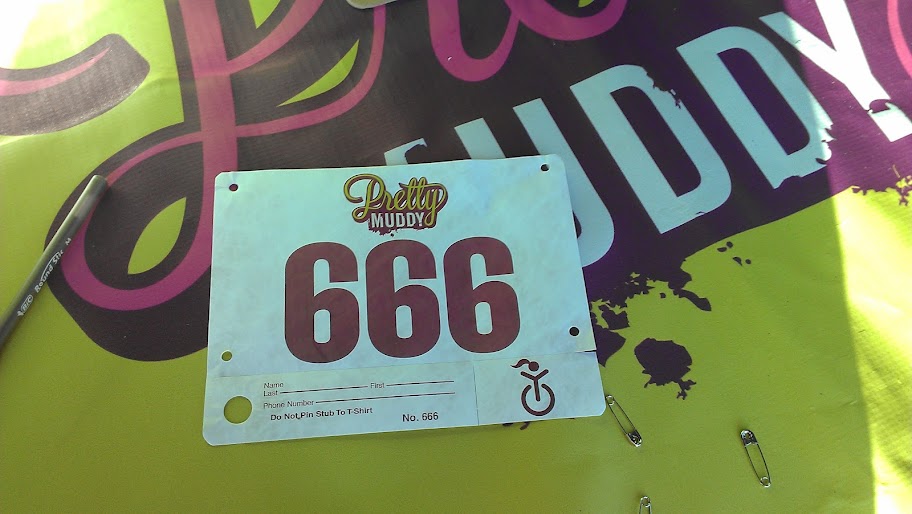 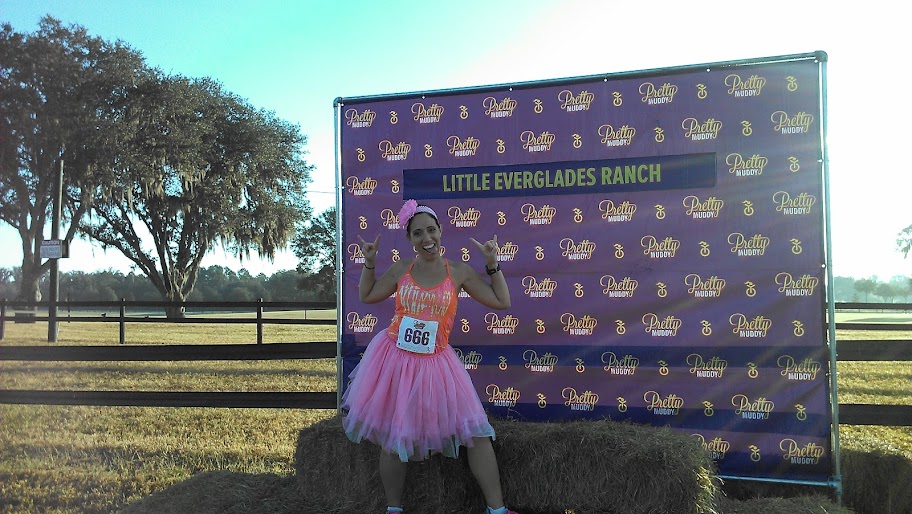 On race day, Jenny of Metamorfit and I started at the first wave at 8:00 a.m., which I now know was great strategy in itself.  Later I learned that some mud runs have long lines for each obstacle, but since not many people want to start at the first wave, there were no lines and no waiting for us. 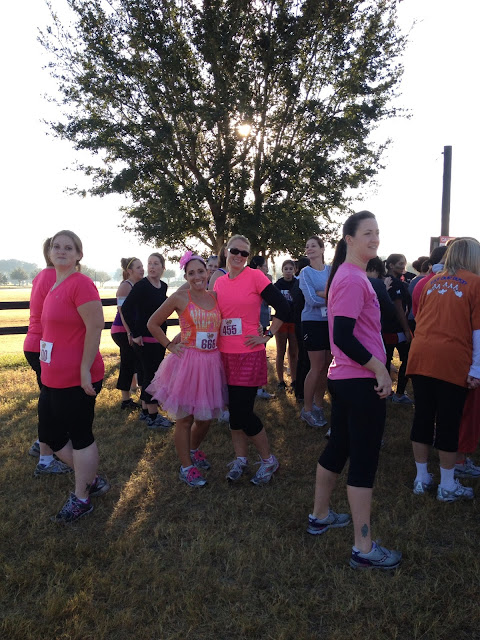 I also learned that Pretty Muddy offers a lot more running than obstacles, which was perfect for a mother runner like me.  I loved running through the gorgeous grounds of the Little Everglades Ranch and I managed the soft terrain of the farm quite nicely.

At the start of the race, we ran through bubbles and I lost Jenny somewhere in the foam.  Very soon after the bubbles, we plunged into a pond and my soggy pond-soaked shoes felt 10 pounds apiece.  Once back on the trail, I wrung out my shoes with every squishy step. 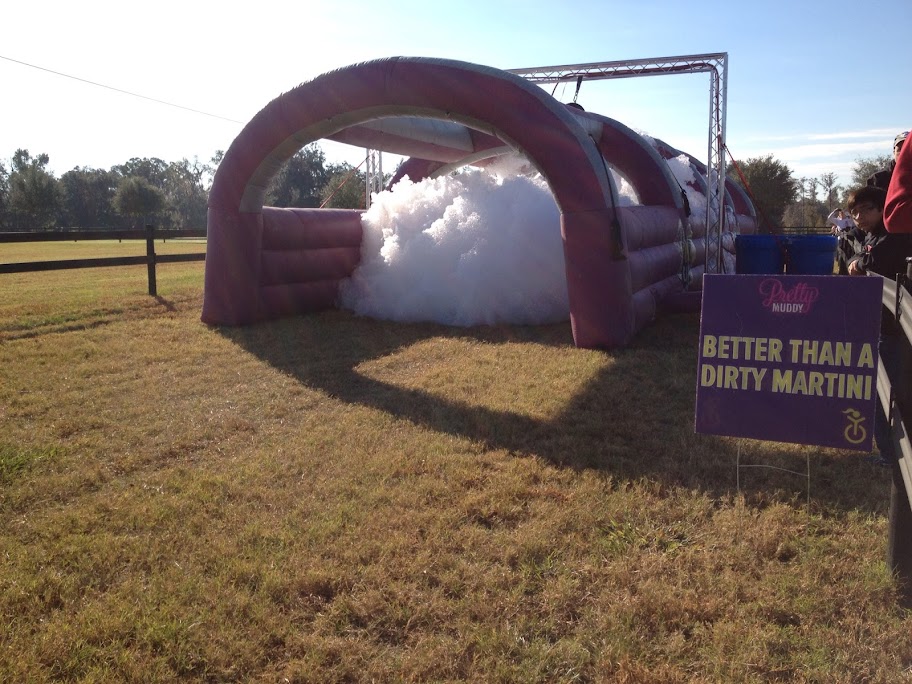 Soon enough, my shoes were all wrung out just in time for the first mud pit positioned in front of a barn.  With my first step into the mud pit, I learned there is a strategy for stepping into mud pits.  Per my mistake, I stepped in too close to the edge and I couldn’t move my feet.  I had to pull my foot out and start over with a giant step forward. Giant step right! Giant step left!  Grab hold of the opposite edge and PULL yourself out! 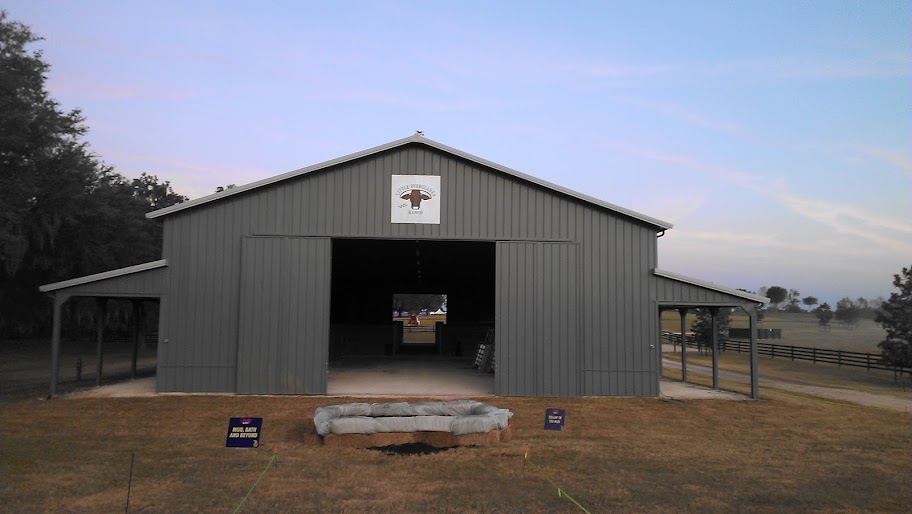 Just after the barn was an obstacle I like to call, “What Wood Jesus Do?”  Since I didn’t know the best way to attack this 2×4 wood carrying obstacle, I chose to carry my plank crucifixion style (over the back of my neck and across my shoulders) while I ran. 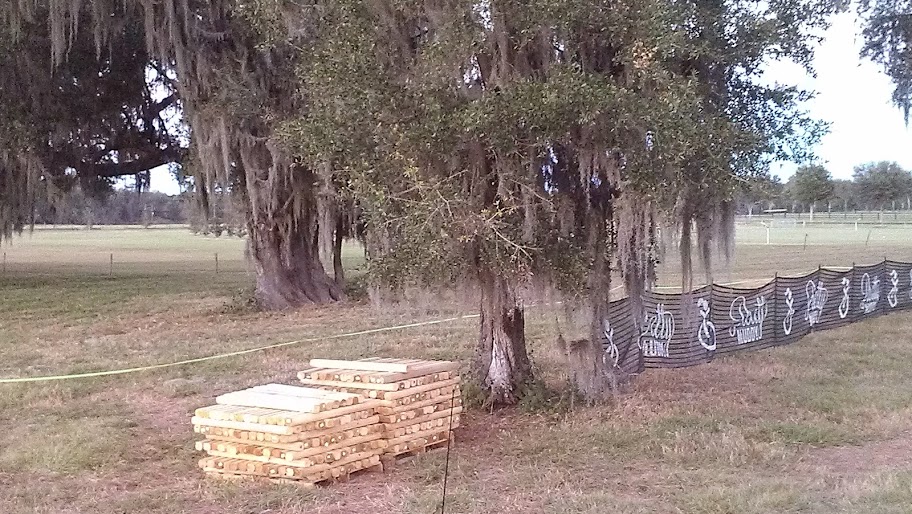 Past the planks, we found a huge inflatable slide with a pool of mud at the base rather than water.  Just after the slide and close to the 1.5 mile mark, I could hear the M.C. calling for the 8:15 wave to start and I knew I was making good time.

Around the bend just after the slide, there stood a cargo net to climb. Then, after another short run, I crawled through two tunnels full of mud, which made me feel a little claustrophobic.  Thankfully, I was off running again. After a short distance, I had to scale the over and out obstacle.  I climbed over one, crawled under one into a pit of mud, back over another and under once again in yet another pit of mud.  Then, I was back on my way, but in the wrong direction.  I ran about a quarter mile off the trail when a sheriff on ATV cashed me down and told me and a few other ladies to go back the other way.

Once back on the right path, I bounced through beach balls and then shortly after that, I had to maneuver through the rope netting of the “get a leg up” obstacle, which included more mud of course.

The last mile led us back toward the start where only two more obstacles remained.  With only a little distance left to go, I had a few more wooden walls to climb.  Once over the walls, I ran as fast as I could up a slight incline to the finish line.   But first, there was one more mud pit to crawl through, which is where most of my mud damage happened. 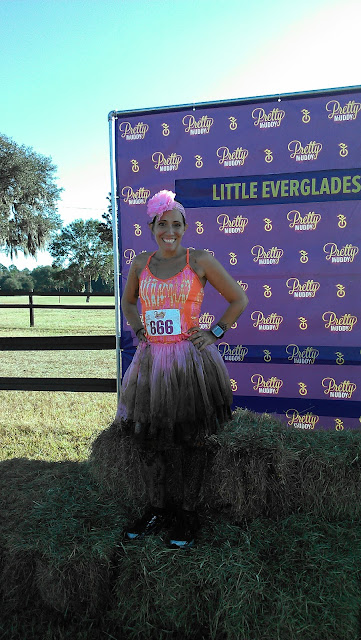 Even with all the obstacles, I finished somewhere around 35:00, which I think is pretty excellent for someone with no previous crossfit experience.  Besides running, the only training I did to prepare for this race is climbing a playground apparatus at the park with my two year old son.  Honestly, I thought I lacked the upperbody strength for such an event, but I am in better shape than I thought. 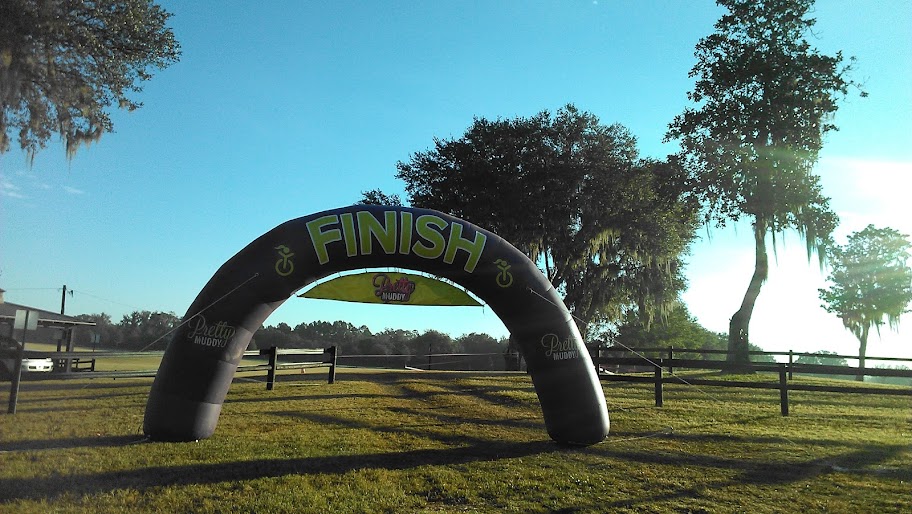 So would I do it again?  Abso-pretty-lutley!

I am so on board for Pretty Muddy again next year!  I loved the endurance race adventure run without all the competitive pressure of a clock or all-star athletes.  Pretty Muddy was good wholesome, down and dirty fun. 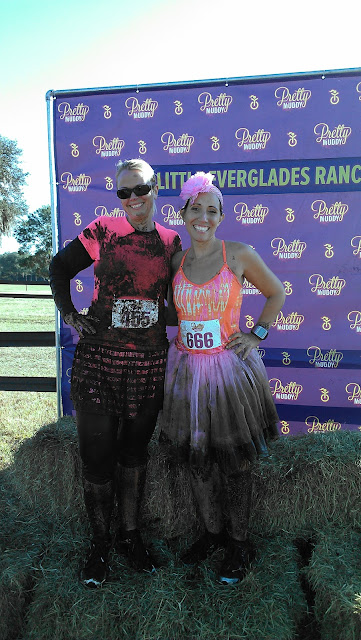 Next year, I would love for my runner mother girlfriends to join me because I could have used a hand in that barn dance mud pit.  Plus, it would be fun to be part of a team with matching shirts and a team motto.   Of course, I’ve already got a ton of team ideas floating around in that Pretty Muddy brain of mine.

So who’s with me?

Ladies, please don’t fear the mud because it washes off better than you’ve heard!  Think of it more of a mud bath spa experience minus the sliced cucumbers on your eyes and a bit more climbing. 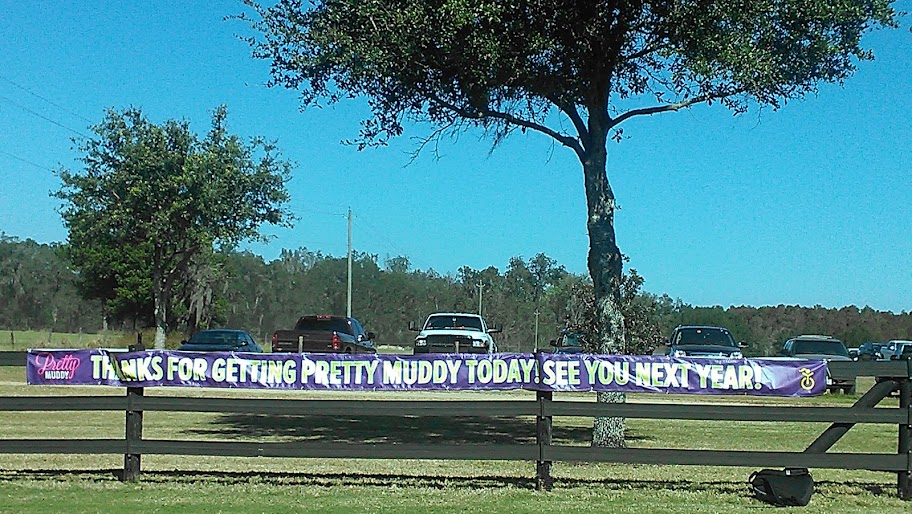 *A special thanks to Courtney for roping me into Pretty Muddy and for sharing her photos with me!*