During the FitFluential and Women’s Running Series Twitter chat, we discussed our favorite running fuel and snacks.  I tweeted off my list of race must-haves like the usual runner snacks such as Cliff shots and bananas, but it was the gummy bears and mini peanut butter crackers that seemed to peek everyone’s interest. 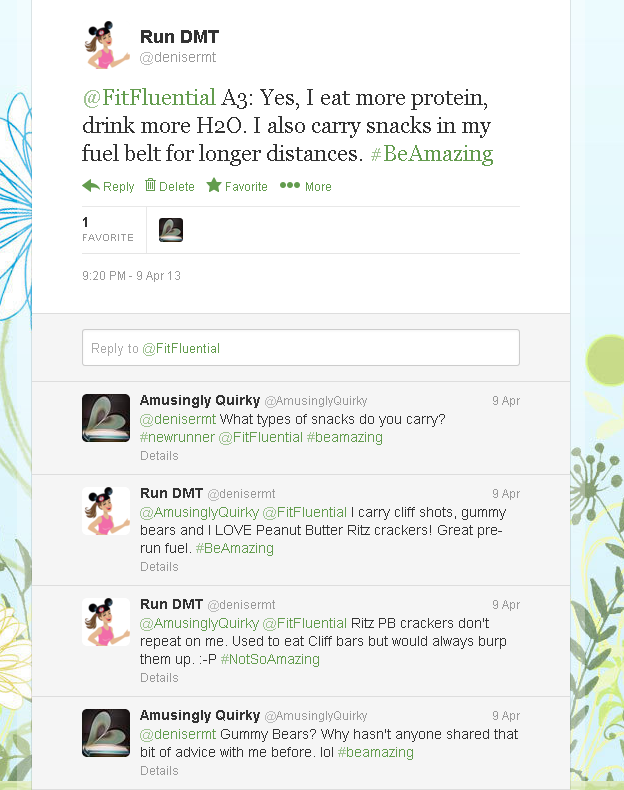 Therefore, for this week’s vlog post I’m sharing some of favorite race snacks.

***Edited to add that this Sunday, I am running in the Iron Girl Half Marathon, not the Women’s Running Series.***

One point I failed to mention in the vlog is that I have packed a lunch tote with a small container (6 oz) of coconut water and a small carton of Horizon chocolate milk to drink after a race, especially after a half marathon.  Many races offer food, water and beer at their post-race party, but it’s important to restore your body’s depleted electrolytes and protein.

Obviously, I prefer the natural Trader Joe’s peanut crackers to avoid the hydrogenated oil in regular mini peanut butter crackers, but the Ritz brand are more readily available at my local supermarket.  Honestly, since I’m running 13.1 miles and I only eat the PB Ritz mini crackers for races and not daily, it’ll do.

By the way, the skull pirate skirt I’m flashing in the video is not a Running Skirt. It is a Sparkle Tech made by Sparkle Skirt.  I love that skirt.  It is seriously my newest, most favorite piece of running gear, but that’s a whole other vlog post.

So, what’s your favorite running fuel?  Do you snack while running?