Knowing that I am a mom of a Monster Truck obsessed four year old, Feld Entertainment invited my family and me to attend the January 17 Monster Jam at Raymond James Stadium in Tampa. 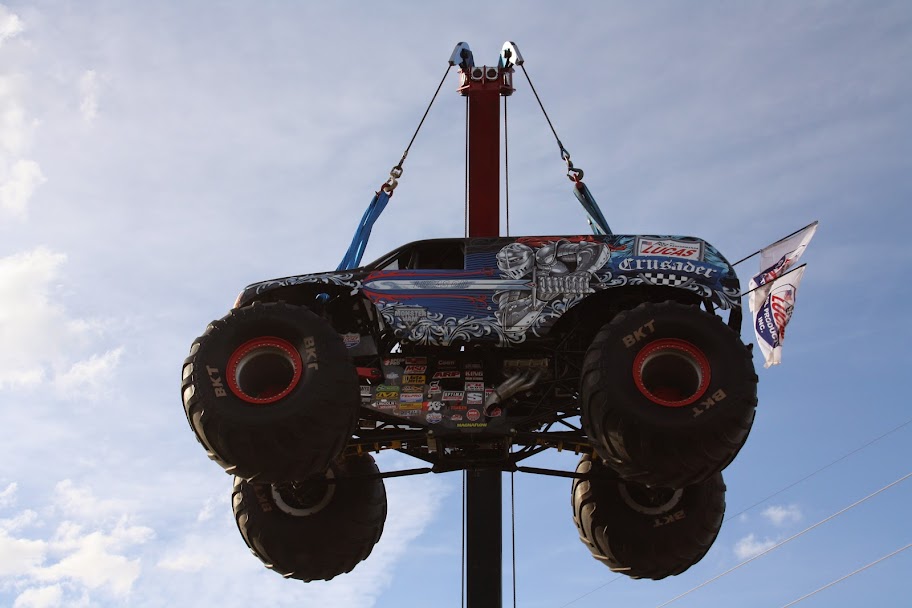 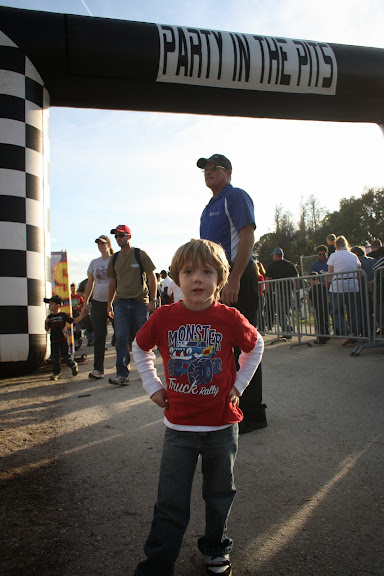 For a boy who loves big trucks, his little dream came true in the Party in the Pits. Seeing real life, overgrown version of his little Monster Mutt Truck sent my Little Lion Man in overdrive. 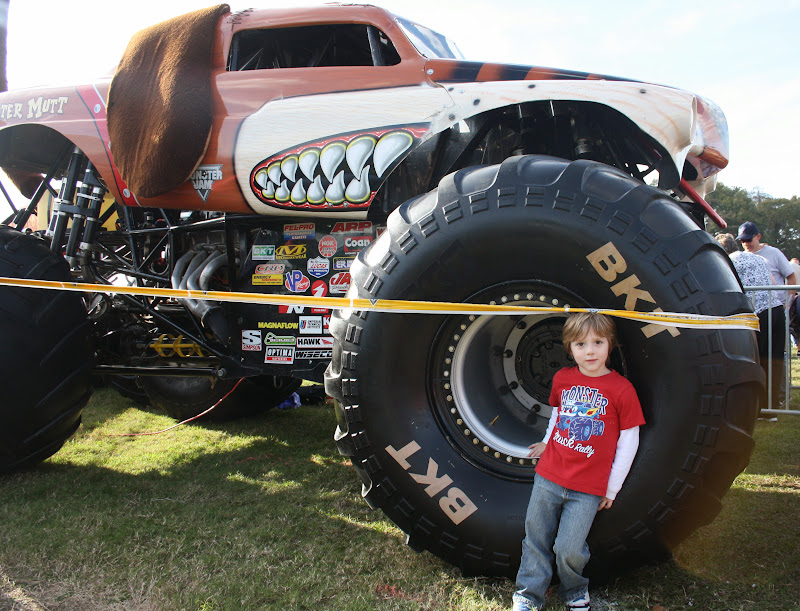 Then given the chance to slide down a Monster Mutt inflatable slide made his day even better until he begged and suckered Mommy into buying some Monster Truck Merchandise. 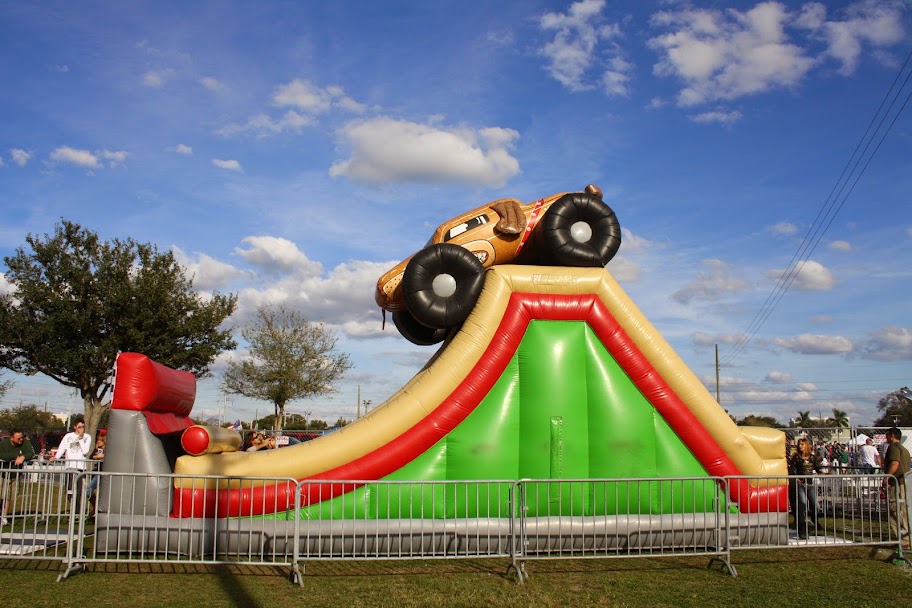 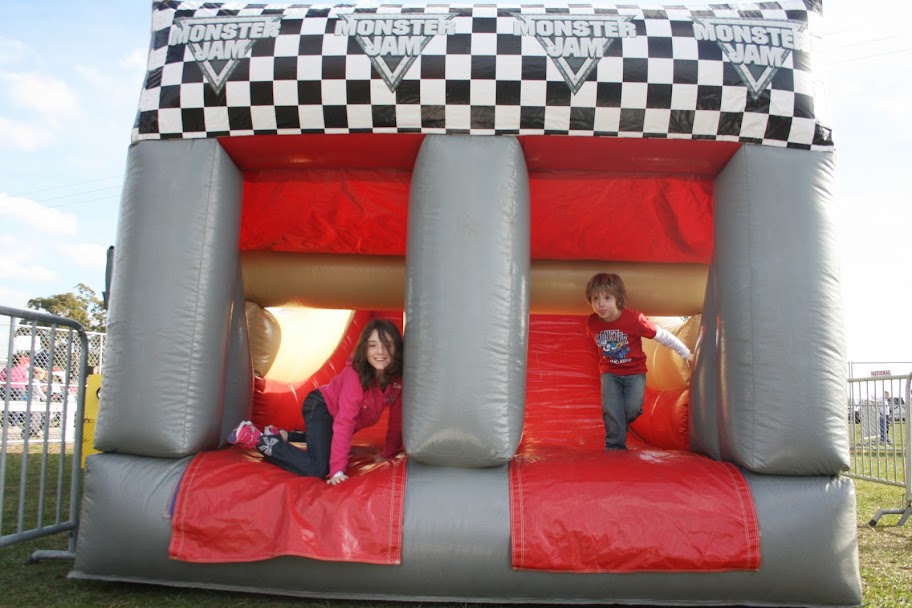 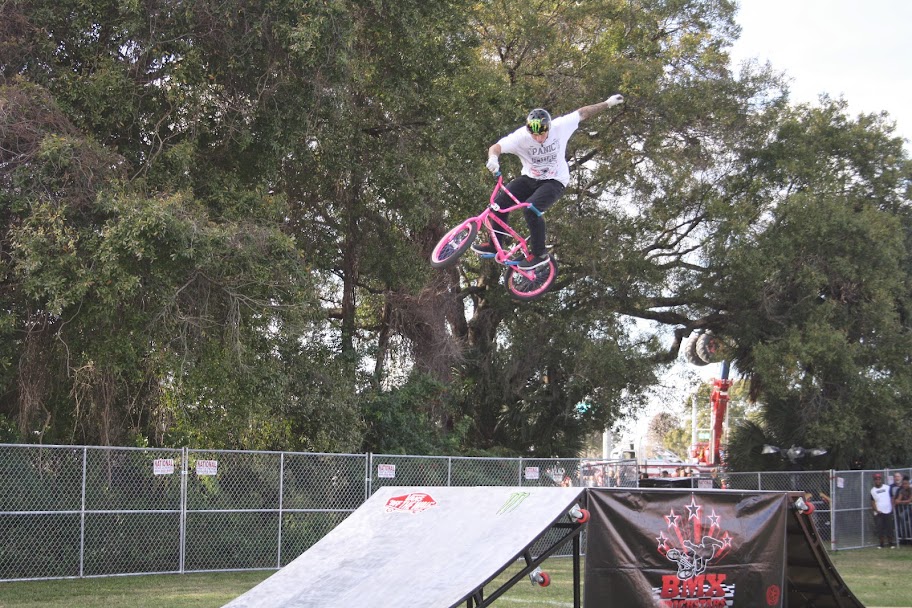 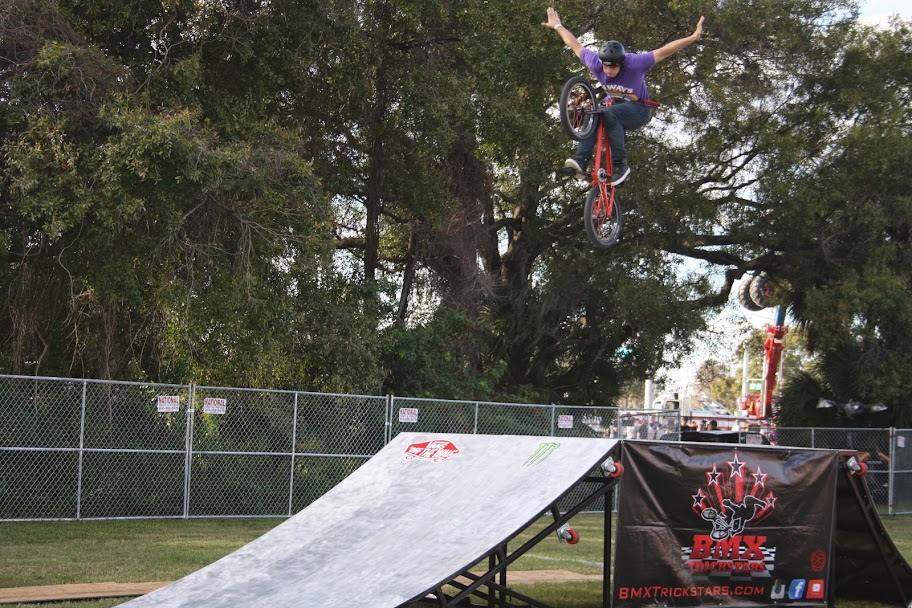 Between the Party in the Pits and the late show start at the stadium, it made for a long day for my crew. 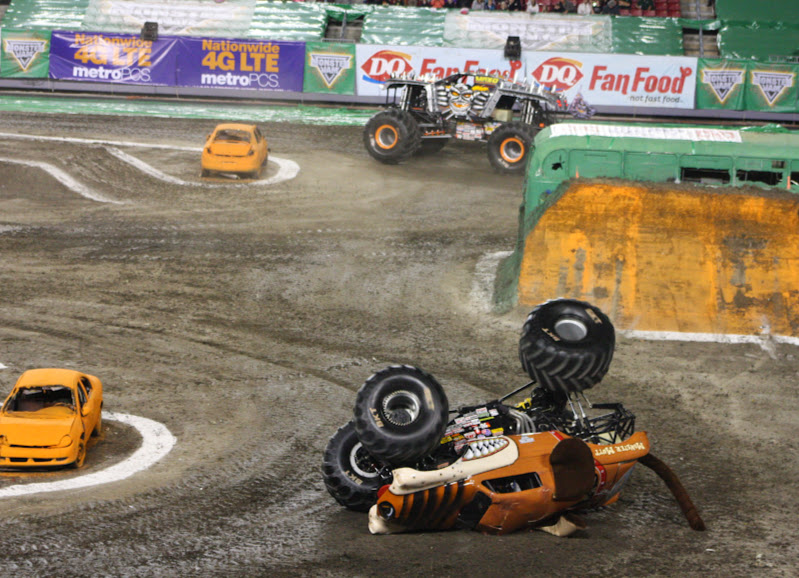 Despite my Little Lion Man’s Monster Truck obsession, my four year old lost interest after the first half. Having never experienced a Monster Jam event before in my life, I learned some basic to survival tips to save a few pennies and avoid the long lines. 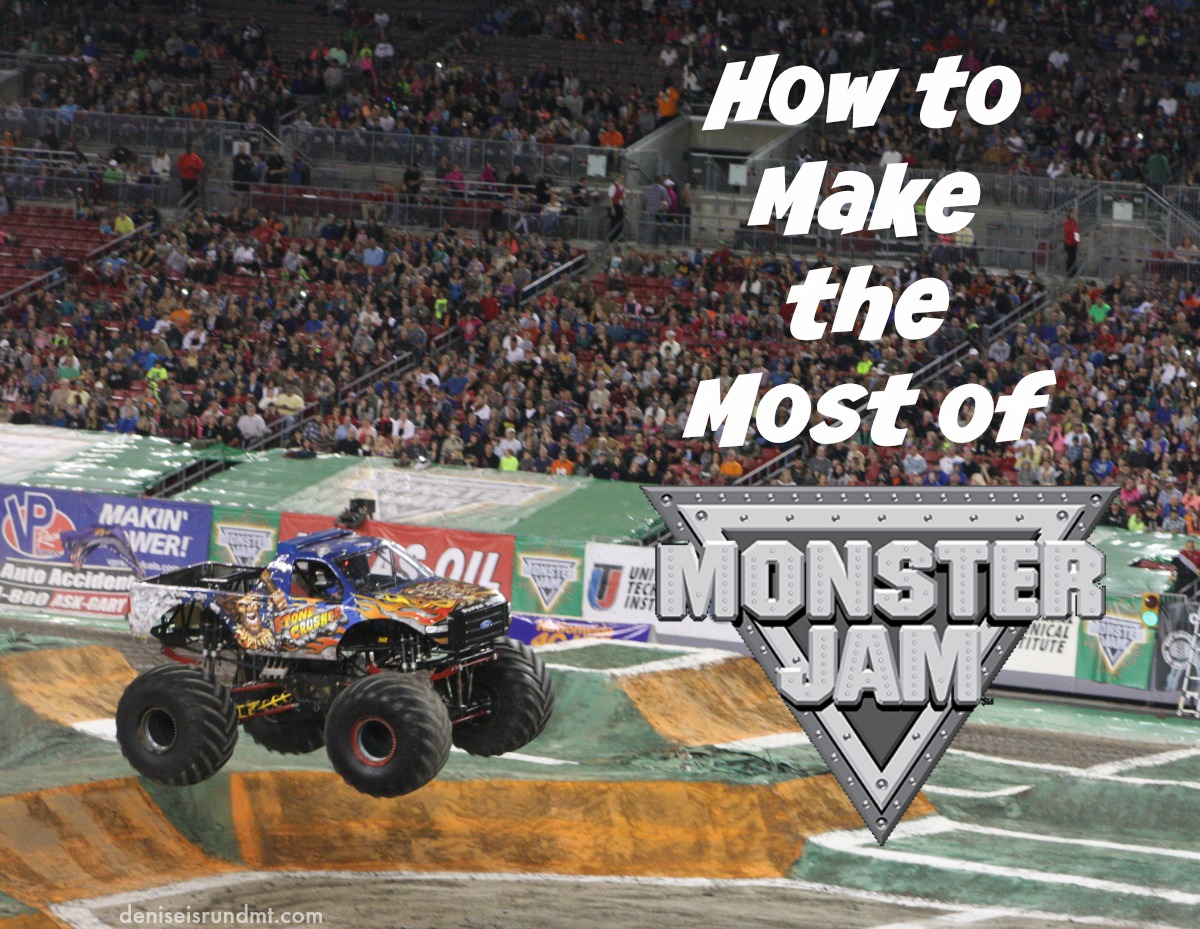 How to Make the Most of Monster Jam

If you decide to pick up your tickets at Will Call, arrive at the earliest time because parking will be a nightmare. Gates open at 5:00 and the opening ceremony starts at 6:30.

Opening ceremony starts at 6:30 which is dinner time for most families. If you arrive at 5:00 to pick up your tickets early, then picnic in the parking lot to avoid spending a small fortune for the food inside the stadium. Surprisingly, tons of Monster Jam fans tailgate in the parking lot before the opening ceremony. If that’s not your jam, then definitely grab a bite at a nearby restaurant before Monster Jam.

Ear plugs are a must for this! If you own noise canceling headphones, those will work too. With sixteen trucks with 1,500 horsepower engines competing side by side, the roars of the Monster Trucks can be a bit much for little sensitive ears. For the cheapest way to survive the overwhelming roars and reduce the noise by 33 decibels, pick up a pack of ten foam earplugs for under $5 at a your local drug store.

Print out the Press Release.

Pass on the Party in the Pits

Thursday, February 5 delivers a chance for fans to touch and take photos with the enormous Monster Trucks and meet the drivers BEFORE these beasts roar in to Raymond James Stadium on Saturday, February 7

For one day only, four of the show’s biggest stars, the giant monster trucks from Monster Jam, will be on display in Tampa this week!

*Trucks listed above are subject to change. 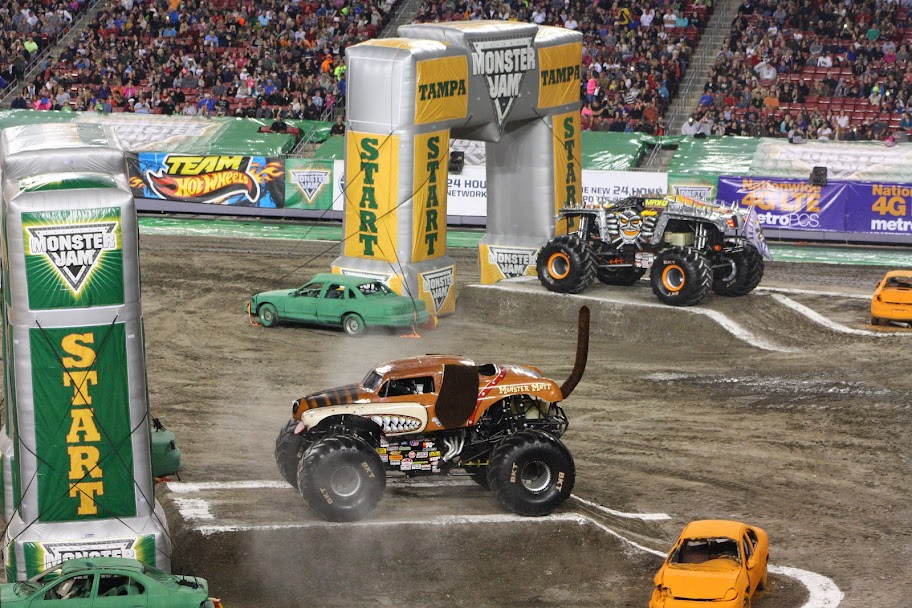 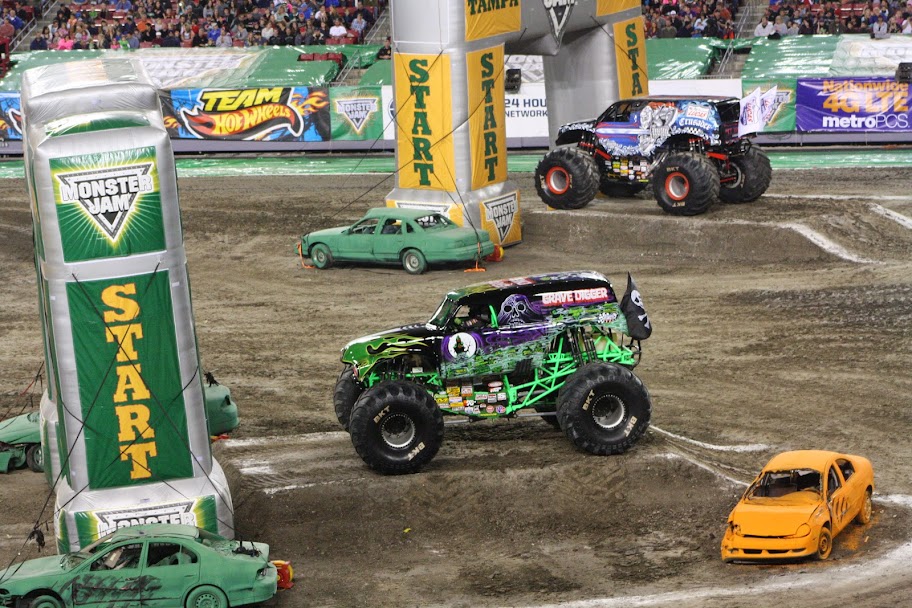 Don’t miss the second event which will likely to sell out! To purchase tickets or learn more information on Monster Jam, visit www.MonsterJam.com.

Tickets are still on sale and will be available through event day on February 7th. Tickets start at $15 and are on sale now at all Ticketmaster outlets, the Raymond James Stadium Box Office, charge by phone at 800-745-3000, or online at www.ticketmaster.com. For more information visit www.monsterjam.com.

Disclosure: My family and I received Monster Jam tickets from Feld Entertainment for the purpose of a review. All Monster Truck love is my son’s. 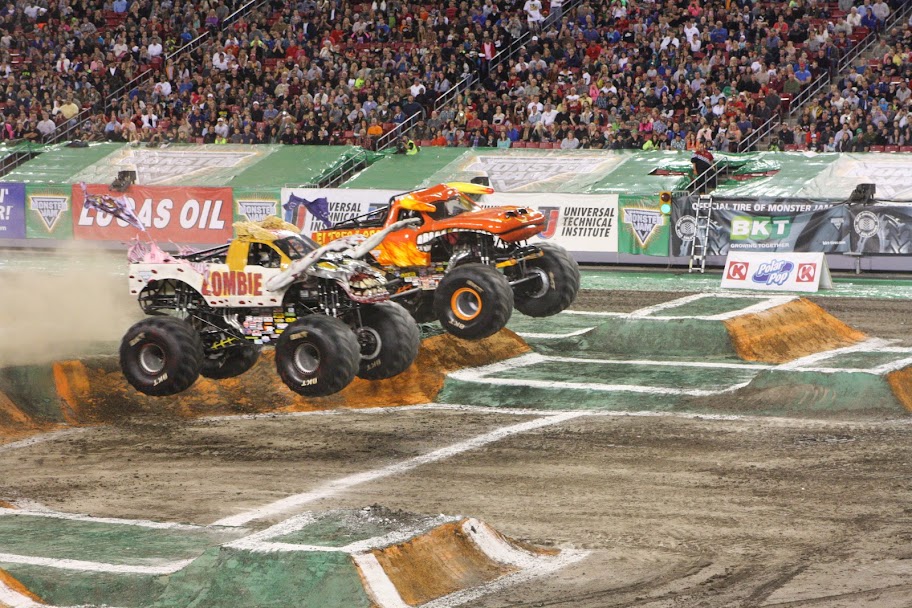