When I heard the rain begin to fall, I knew there were going to be some challenges with this race.  I think my husband thought I would back out when he saw the rain, but I channeled my inner Honey Badger, put on my big girl running panties and faced the race in the rain.

But besides the rain, it was incredibly dark at Starkey Wilderness Park.  There was no signage and I had no idea where I was going or where to head to for the race.  Finally, I spotted some small orange bulb lights festooned along a shelter.  I assumed that was the check-in spot for the race.

As I walked along the path to the shelter, I noticed the line to the restroom was about 2 dozen ladies long.  Before the start of the race, I would need to find a place to pee, which wouldn’t be hard in the dark woods as long as a wild board didn’t bite my butt.  Proudly, I peed squatting behind my car door, which is the first time I have ever peed in public (that I can remember).

When I retrieved my chip, the volunteers commented on how cute I looked in my costume.  Since it was a costumed race with prizes, I assumed they would make a note next to my bib number that I was wearing one.  Nope.  Well, then surely they could show me the way to the start.  Nope.  “It’s somewhere over there.  You’ll see two orange cones.” Great.  Thanks for that.

I followed some Suncoast Running peeps to the vague and hidden start.  Sure enough, there were two orange cones.  No lights.  No ginormous Frankenstein inflatable.  No blue chip start rug.  Only two orange cones standing in the road.  Nice.

Due to the rain, there was a 15 minute start delay.  Then, all of a sudden people started running.  No foghorn or a person yelling into a bullhorn telling us to “Go!”.  Everyone just took off.  Lovely.

For the first few miles, we ran along the roads that weave through the park towards the front entrance of Starkey Park and followed the newest addition to the bike trail from the entrance.  Finally, the rain stopped but the roads were full of puddles and my shoes were already soggy.  Yay.

I spotted my Suncoast Running friends around the 3 mile bend.  They were all doing great and obviously, they were going to claim all the division places.

Admittedly, I am not a fan of running on Starkey Trail.  I get bored.  “Oh Look.  Another  tree.  Wait! What’s that?  Oh, it’s another tree….SQUIRREL!”

I tried to make the most of this race by cheering for everyone as they ran past.  “Way to go!  Looking good, mama!  Nice pace!  Keep it up!”  I realized that wearing a Glee Cheerio costume was a good choice for me or maybe I was taking the whole cheerleading a little too seriously.  Either way, I found my own fun.  I was certainly in character and I could break out into song any minute.

I think I did sing a song or two.  I can’t remember which ones, but I’m sure the person who paced next to me does.

I do remember a cicada flying into my arm which caused me to scream and jump out of my shoes.  That, of course, caused the runner next to me do the same, but I was scared.  After all, it was a Halloween race and I still have nightmares of those big-ass Starkey Trail horse flies.

Throughout the race, I saw some really fun costumes and filed away the ideas for next year, like dressing as the Blind Melon Bumblebee Girl.

The water stations were well equipped and properly spaced along the trail and the volunteers that manned the stations were friendly.  Also dressed in costume, they cheered for all the runners as they passed.  The “goat” made me giggle, because it reminded me of the line from Waiting which I shouted out when I spotted him, “Oh no.  It’s the goat!”  But, I think the volunteers were too young to get it. 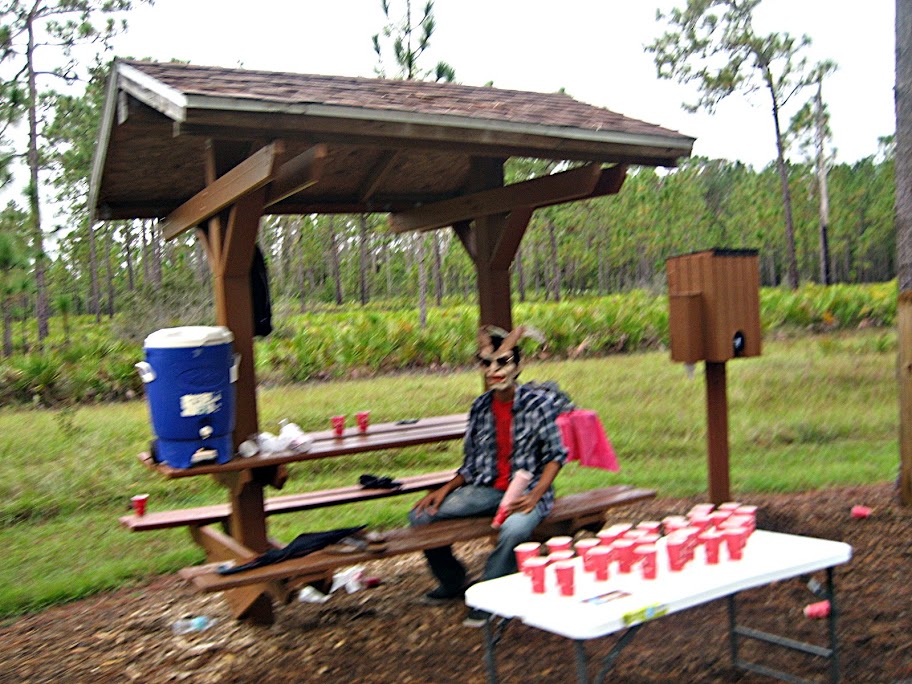 Although I was happy to see all the water stations, my fuel belt  was well stocked with snacks and water.  Around mile 7, I sucked down a Cliff shot.  Around mile 8, the volunteers provided Power Gels and I have to say, I’m not a fan.  They taste artificial.

Between all the water stations, all the water bottles on my fuel and the snacks, I desperately needed to pee.  Around mile 9, I contemplated parking a squat on this rock behind this shed.  But then my fear of peeing in public squelched that idea. 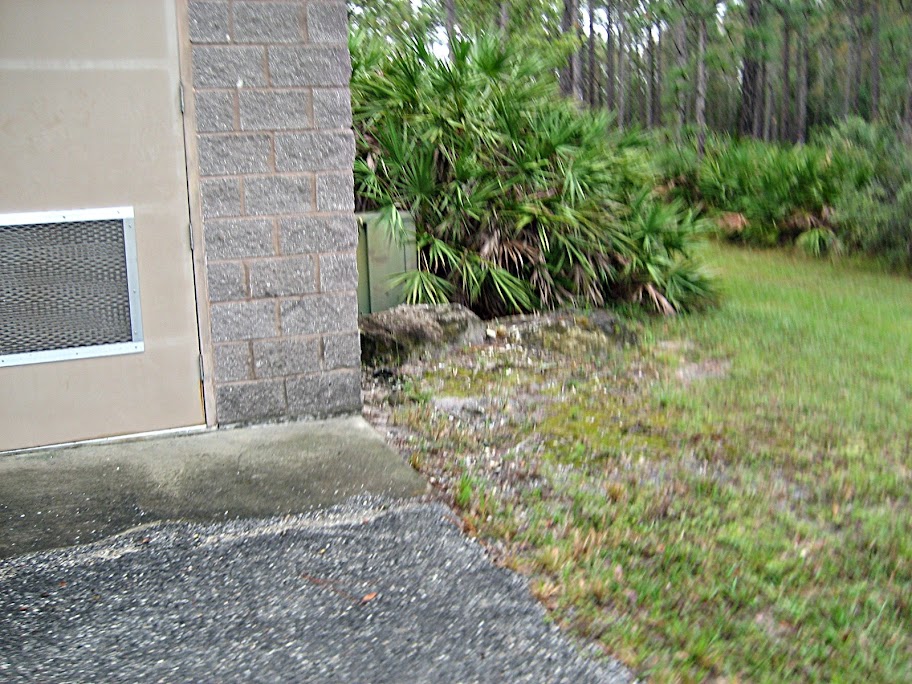 My goal was to finish around 2:15 and with a steady pace of 10:30, I felt I could do it.  Only a few months ago, I ran a half marathon on this same trail…alone…very alone.  This time, I paced with several other runners and felt good about my pace.  It also felt good to approach the finish with other runners.  It kept my motivation high.

As we came around the final bend, the course led us along a side stint off the trail back into the park.  We ran along the roads again for about ¼ mile.  The last 200 feet of the course had us run through grass to finish line, which I wasn’t happy about and I wondered if a race that couldn’t be bothered to hang signage would check for holes and dips in the ground.

Then, I spotted my kids and my husband cheering for me as I approached the finish and I started to cry the ugly cry.  I almost made my goal and my family was there to witness it.  And then, I began to hyperventilate from crying.  When I crossed the finish line, I couldn’t catch my breath and it felt like an asthma attack. I needed my inhaler.

They volunteers at the finish handed me my medal and offered to cut off my chip, but I couldn’t focus because I couldn’t breathe.  I asked if anyone had an inhaler or to point me in the direction of first aid.  They looked at me like I spoke a foreign language or perhaps they were worried they would have to perform CPR on me.

Allan reminded me to breathe as we walked back to the shelter, but I couldn’t see where I was going because my tears caused my mascara to run into my eyes and it stung.  Great.  Now, I couldn’t breathe and I was blind.

Back the shelter, my Suncoast Running friends greeted me and praised my efforts for finishing close to my goal (20 minutes faster than Pasco Challenge Half Marathon), which means so much hearing encouraging words from some truly amazing and fast runners.  Another female runner, who finished seconds before me (wearing pink in the photo above), also cheered for me.  She told me that I kept her going and I was a wonderful inspiration.  Seriously? Me?  As astounded as I was to hear it, her words made me smile for the rest of the day.

Once I could finally breathe, I scarffed down some food and waited with the Suncoast Running gang for the awards.  Would I place?  Would  I win anything for my costume?

This is where things get a bit hairy.  Apparently, there were some problems with the chips and it took over an hour for the race officials to download the times.  Then, I later learned that all the participants that registered online (I sent my registration via mail-in form.) checked a box on Active.com to confirm they would be a costumed runner.  There was no such box on the mail-in form, which is why I assumed the volunteers marked our bib numbers when we arrived at the check-in.

Although I earned 4th in my division (40-44), I did not earn the title of fastest costumed runner.    However, I did earn the award for Best Costume which was decided by cheers.  I begged encouraged my Suncoast Running friends and the rest of the crowd to holler for me.  With my poms poms, it was like a Run DMT pep rally, but I think people repaid me with cheers for all the cheers and smiles I gave them along the trail.  Thank you so much!!!

After the race, I was still pretty miffed about not making fastest costumed runner, when clearly I was faster than those that finished.  I should’ve finished in second place.  So, I sent the race officials an email:

I’m not sure how the times for the “Frankenfooter Fastest Half Marathon Costume Overall” were recorded, but my finish time was faster than those listed. I was bib #81 and I was in costume dressed as a Cheerio Cheerleader from Glee. My time chip time was 2:21:28. Therefore, I should have been listed under second place for “Frankenfooter Half Marathon Costume Overall”. Is there anyway to adjust this?

Thank you for your time and consideration.

This was Big Dawg Runnin’s response to my concern.

You registered for the Standard Half-marathon; you finished in 2:21:28. Those listed on the costume category, specifically signed up for that category. They were separate choices on ACTIVE. Those that chose to sign up for the costume section gave up the chance of winning age group awards. I can switch your category if you would like me to….

No apology.  No “We’re sorry about the mail-in form mix-up.  Thank you for bringing it to our attention so that we can correct this.”  Nada.  Just an all caps ACTIVE and the implication that I’m an idiot for not registering through ACTIVE.

I dropped the issue and did not reply back to Val’s email.  In the end, I earned 4th in my division, which is pretty dang good and I earned Best Costume overall.  I’m good with that.