Disclaimer: My daughters and I received race entries to the Girl Scouts of West Coast Florida Thin Mint Sprint 5K in exchange for social media exposure and my honest review.  The achievement and opinions are my own.

As a runner mother blogger, many things motivate me to run.  I’ve run for beer.  I’ve run for pancakes.  But I have never run for cookies.  A 5K race that rewarded the top 50 male and females with boxes of Thin Mints was all the motivation I needed to sprint. 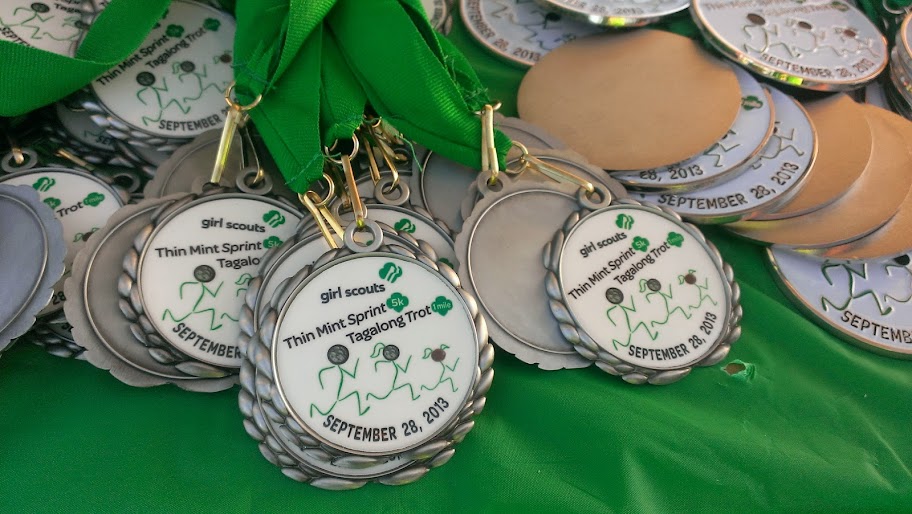 Being a Girl Scout mom to a Junior and a Cadet, I have sold and donated my share of Girl Scout cookies.  Admittedly, it was nice to try to earn a box donated by Fit Niche, one of the sponsors for the race.

Allana and I arrived at the start of the race in scenic downtown Safety Harbor just as the sun began to rise painting a beautiful backdrop for the race.  Safety Harbor is quickly becoming one of my favorite race locations. 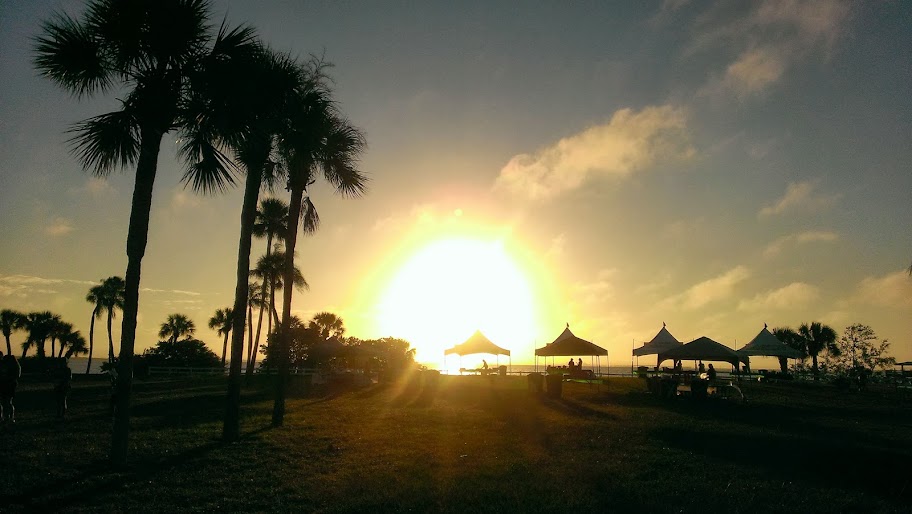 We checked in, collected our race bag goodies which included an adorable Girl Scout green Thin Mint Sprint t-shirt.  As we waited for our friends to arrive, we enjoyed the sights of a Girl Scout cookie themed race, like giant friendly running rogue cookies greeting participants upon arrival.  Their funny oversize carton hands and spindly legs reminded me of the Justin Timblerlake SNL sketch and prompted me to blurt out, “Bring it on down to Cookieville!” 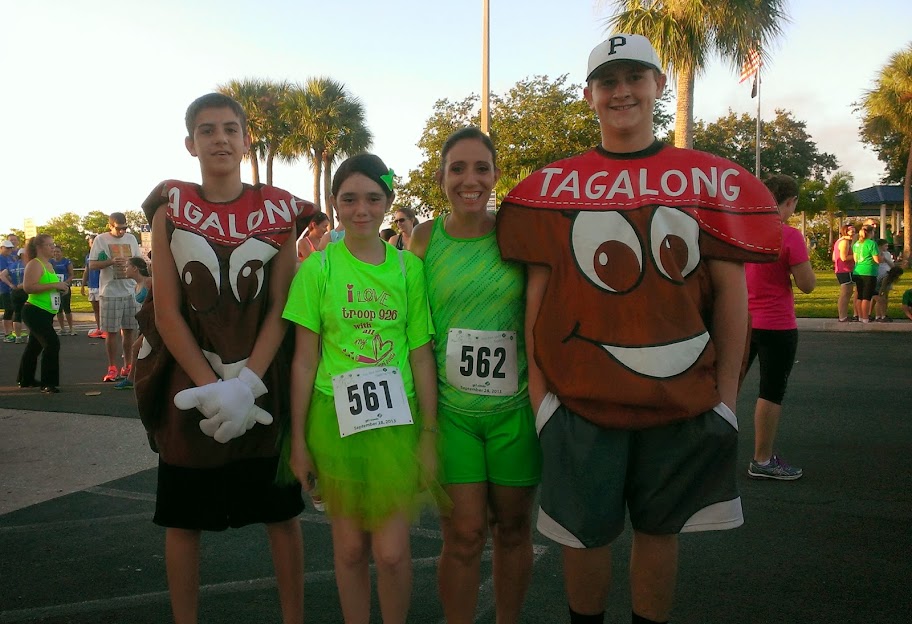 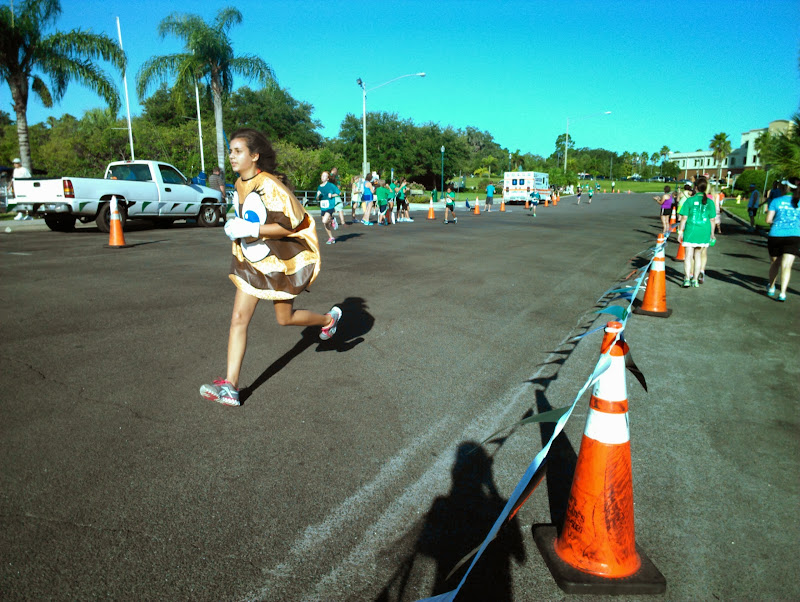 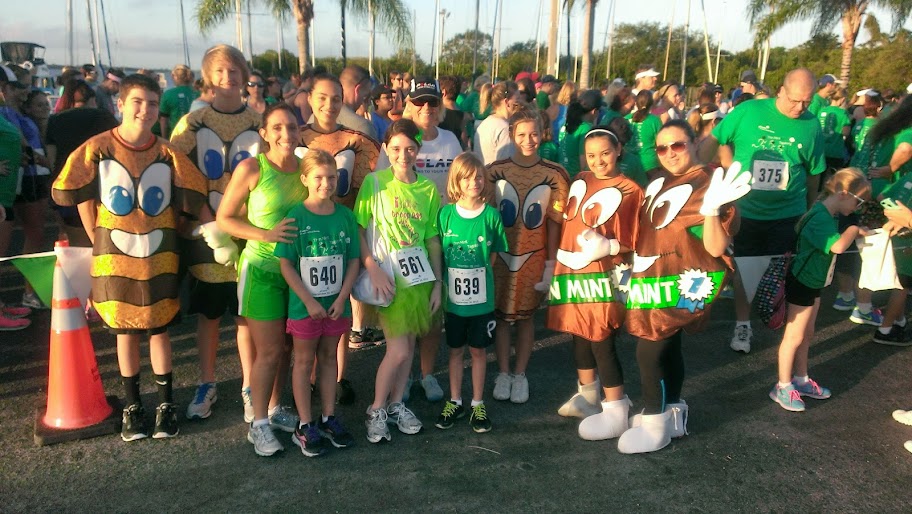 Once Jenny and her gang joined us, I found my way to the start, represented by a green line in the road.  I was on a mission to win Thin Mints and hoped to earn a PR.  In the crowd at the start, I noticed a few cookies tagging along for the run.  Once the fog horn blasted, Tagalong led the participants through the streets of Safety Harbor. 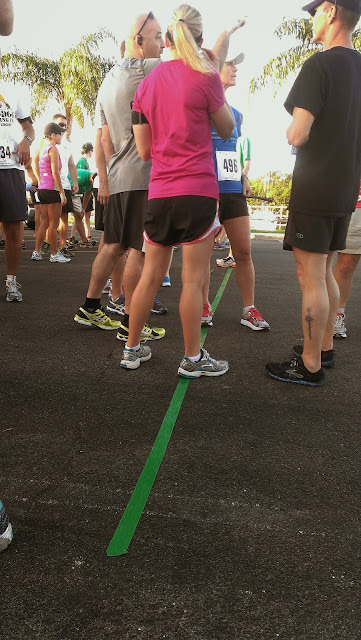 The course Do-Si-Do’ d along the same route as the Best Damn Race with a cobblestone start winding through a charming residential neighborhood shaded by overgrown oak trees.  Unfortunately, for PR purposes, I left my cell phone with Allana and I didn’t snap any photos while I ran.  Thankfully, Allana filled the runner photographer role by stopping to take photos along the course. 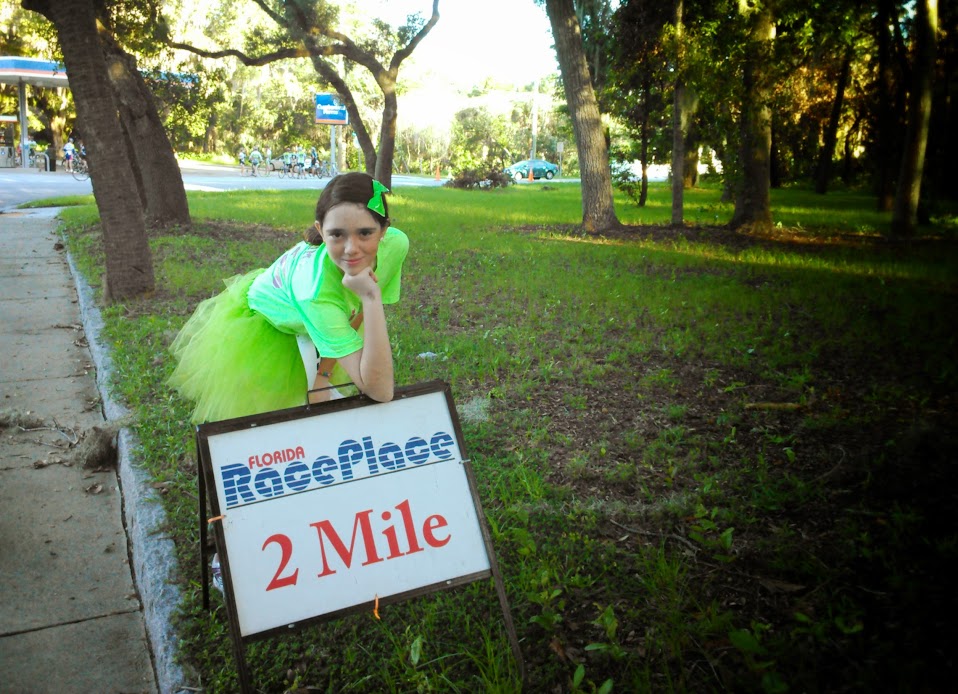 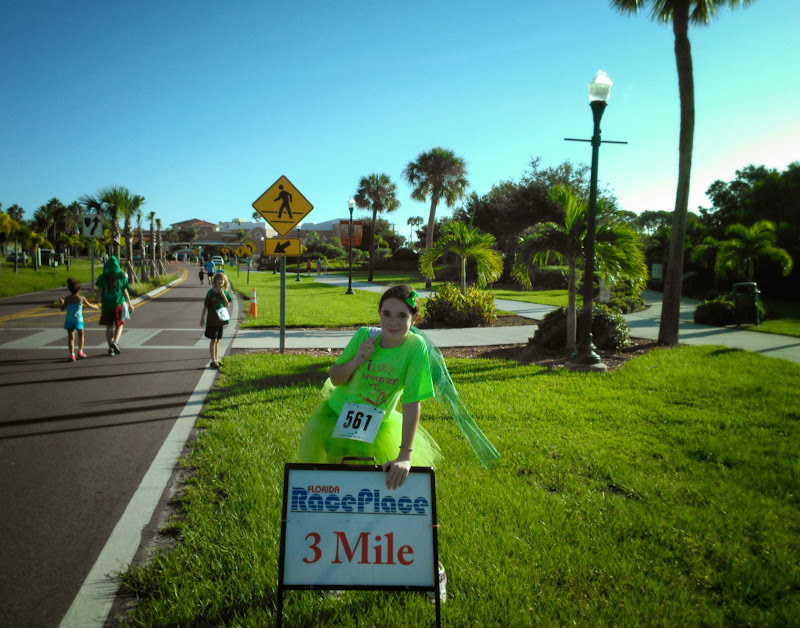 Friendly, smiley Girl Scouts manned the water stations and cheered for us as we ran by.  Just after mile one, I passed Jenny and our Girl Scout gang, who also cheered for me.

Then at the turnaround, I developed a side stitch which meant I started out too fast and as the sun rose over the bay, I began to feel the heat.  I had to slow my pace down and my cookies dreams became a runner fantasy.  I didn’t believe I would finish in the top 50 females.

Desperately I tried to maintain a decent pace.  Feeling overheated as the course wound back through downtown, I took advantage of the next Girl Scout water stop at Mile 2.

Back on Bayshore Blvd, I began to get my second wind and I pushed it to the finish line.  As I crossed the finished line, I heard the announcer call out, “She finishes at 27:45 with only 15 boxes left for the females.”

“What? I earned Thin Mints after all?”  I thought to myself as a volunteer hung a ribbon over my neck and handed me a pink card to record my finish time.  Not a PR, but I placed after all!

Jenny, Ella, Haley and Allana finished at 56:32.  I happily cheered for them as they crossed the finish line.  “I knew you would win a box,” Jenny said as soon as she crossed.

“It was questionable there for a while.” I replied. 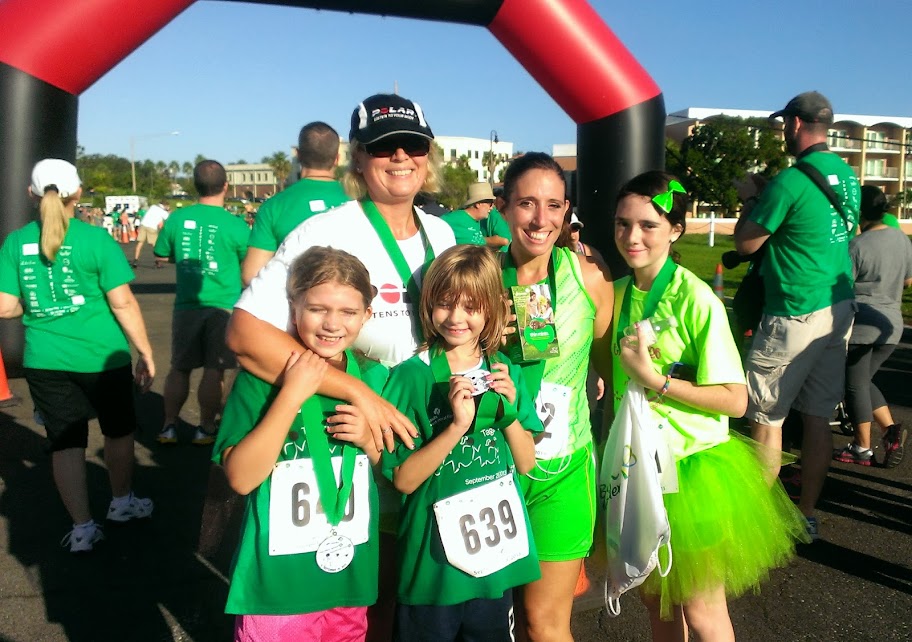 Although after the race, everyone was a cookie winner as the race organizers offered an opportunity for all participants to snack on stacks of every variety of Girl Scout cookies. 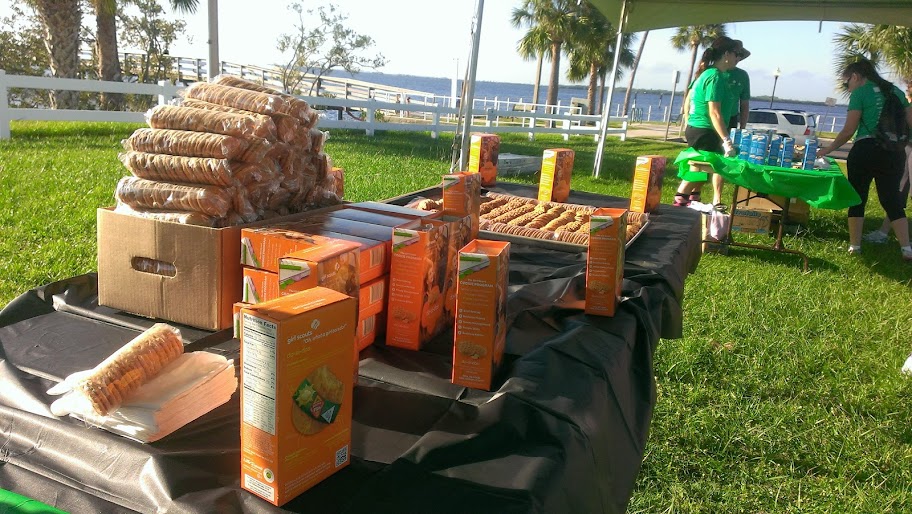 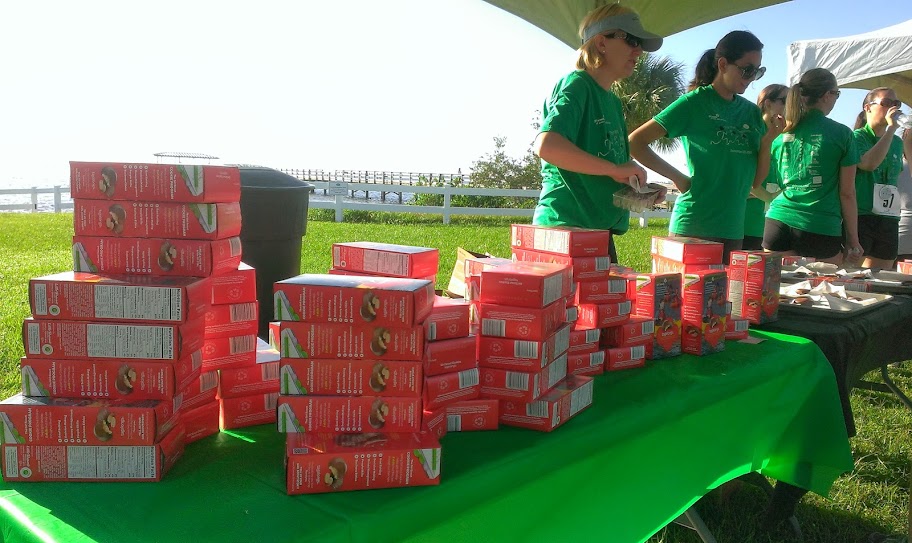 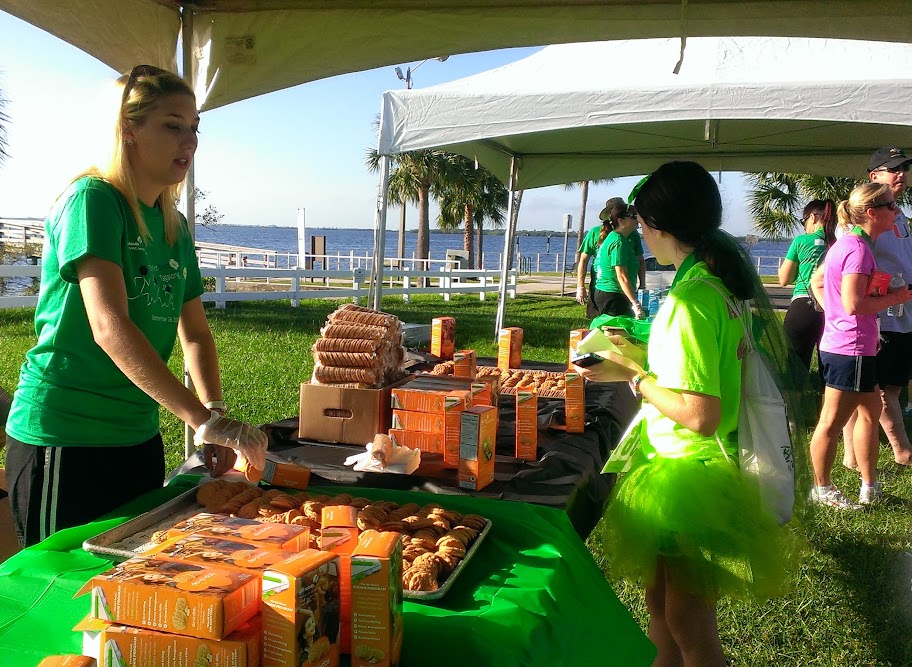 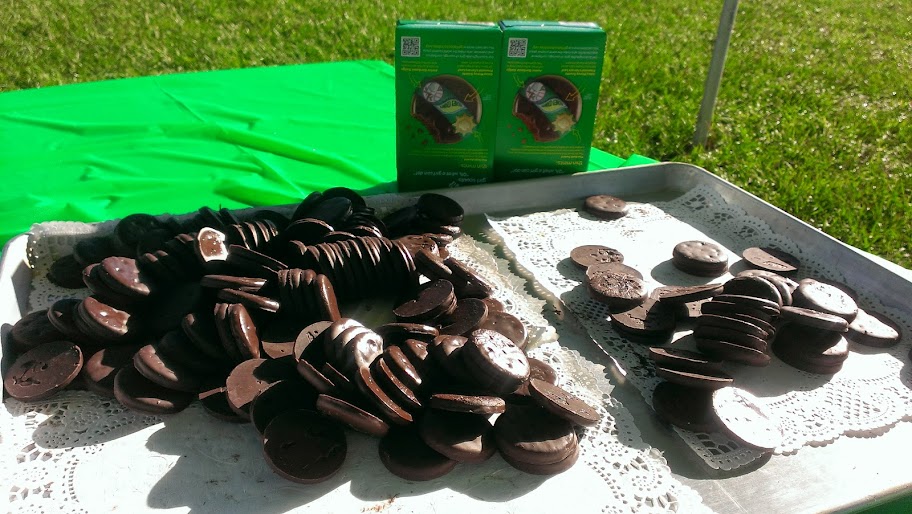 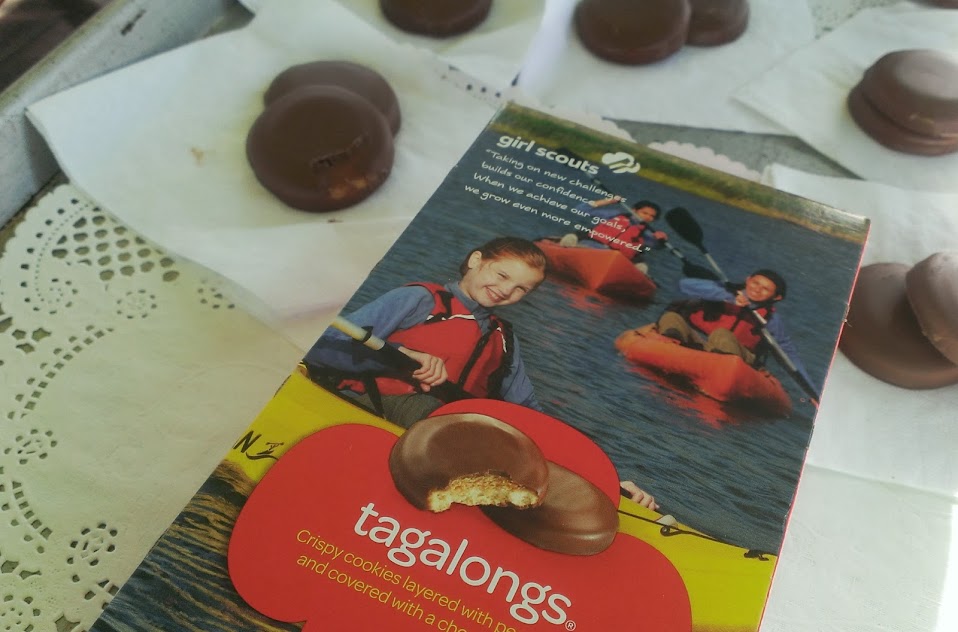 By the size of the crowd, the inaugural Thin Mint Sprint had a successful turnout.  It was reported that over 800 registrants ran the streets of Safety Harbor.  It made me proud knowing that Allana and I contributed to that.

But winning a box of Girl Scout cookies made the experience even sweeter. 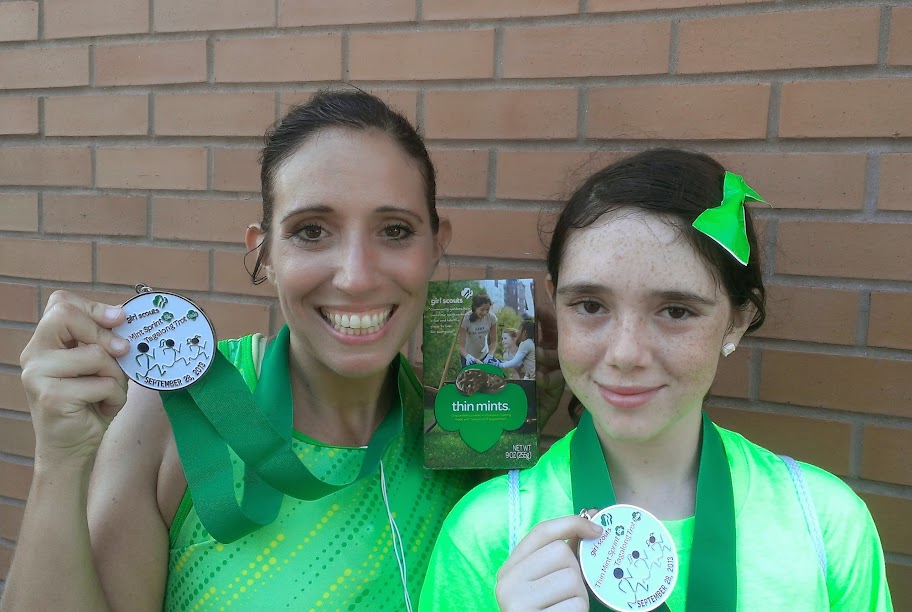