In 2013, I completed all the races I set out to run in and then some.  In fact, in 2013 I completed 25 races, including two marathons, seven half marathons, one 15K, two 10Ks, six 5K two triathlon sprints, one color run and two endurance races.  Yeah, it was a fun year.

December turned out to be the only month I took a break from racing.  I chose to rest and not think about races, not even virtual ones.  I think the rest did me well and I’m ready to take on 2014 strong!

It seems that 2014 is following a similar pattern as 2013.  My race schedule below features the races that I know I will compete in this year, however, I’m always open to other racing opportunities that may come along.

Last year, my goal was to run faster and become stronger, which I definitely achieved by running my fastest 5K, earning a place group division award and shaving time off my triathlon sprint.  This year, I plan to do more of the same.  I will strive to shave seconds off my overall times and continue to strength training as well as focus on my triathlon training.  I truly believe the cross training did a world of good for me.  My ultimate goal this year is to qualify for Boston and hopefully, I can do that at Space Coast Marathon.

I know. I know. I swore I would never run the Space Coast Marathon again.  But since I ran the half last year and survived and I would have already trained for a marathon with NYC only a few weeks before, I figured why not go for it.  I want that Space Coast Challenger medal and to aim for the Big Bang Series.  Therefore, I’m in for it for three years!  Well, I am a Marathon Maniac after all.

This year is beginning to unfold a year of challenges for me, starting with the Best Damn Race challenge on February 1 and then the Gasparilla Michelob Ultra Lime Cactus Mini-Challenge at the end of February. I’ve also decided to go for the Florida Halfathon Challenge later this year because it’s something I’ve always wanted to do.

I’m excited for new distances, going for challenges and new races I’ve never run before, including the half marathon at the Celebration Half Marathon this month and New York City Marathon in November.

The A1A Marathon is next month and taking off 27 days from running in the month of December had its consequences.  I am so out of shape and not ready for this race!  I was hoping to PR but now I just want to finish it without injury.

I really don’t have a decent excuse for not running during December, however, I managed to survive the holidays without being sick, which is a huge deal for me.   I always seem to come down with something every Christmas and this was the first year I can remember where I wasn’t sick for Thanksgiving or Christmas.  So, I suppose the rest did me some good.

Although I didn’t contract an illness, my legs are like rubber bands that need to snap back into shape.  With only 6 weeks left to train, I discovered a training plan to help condition my body for the challenge of a marathon.  For the next few weeks, I will be following the ASICS 6-Week ‘There’s Still Time’ Marathon Training developed by competitive runner and Coach Andrew Kastor.

Basically with help of this plan, I will run every day at an easy pace to condition my body for the endurance and distance of a marathon.  Since this is my 6 marathon, the muscle memory is there and hopefully it won’t be too much of shock to my body.   To quote coach Kastor, “The most important thing is to get in the miles and time on your feet and to be able to recover properly, leave the racing shoes behind for this program.”

Spending time on my feet is exactly what I have been doing since my bridge run on Sunday with Marcia and Liz and our security patrol, Patrick who rode his bike while we ran.  With temperatures in the 60s at the start, it was a typical cool Florida morning.  It had been awhile since I last ran the Clearwater bridges and as tough as the run was, it was fabulous to run with the sunrise over the water.  Starting at Sand Key to Coachman Park and back was a total of nine miles and I stayed around a 12 mm.  After returning from my running hiatus, I didn’t want to push myself.  I simply enjoyed the company and the view. 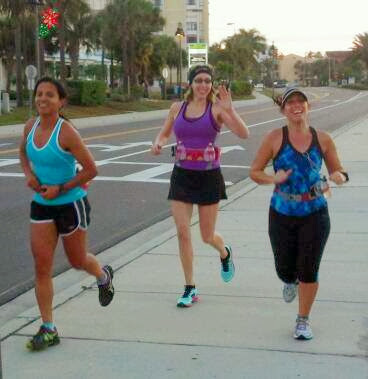 While out there, I bumped into Nancy of This Crazy Life of Mine which was such a pleasant surprise.  Of course, runner bloggers stop for photos. 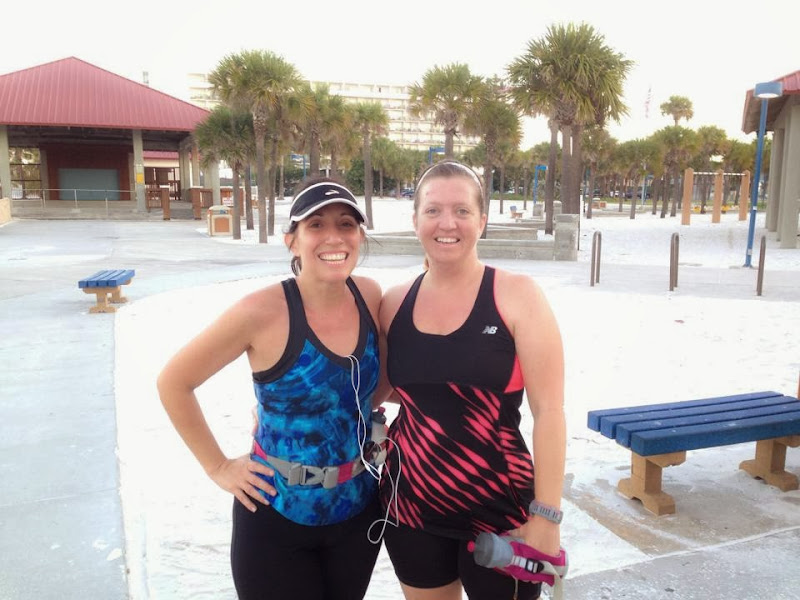 On Monday, I ran 4 miles with my friend, Sarah and her track star daughter, Izzie.  After a tough bridge run, I kept my pace easy and according to the Asics Kastor plan.

Much like my recent running attempts, the temperatures hit an all time low.  With temperatures with the high 20s at 5 a.m, I wanted to stay in bed. Rather than flaking on the Kastor Asics plan only two days into it, I decided to attempt running 3 miles on the dreadmill after Body Pump at the Y.  It was brutal but I did it and stuck to the plan.  On another positive note, I ran intervals at a slight incline (around 3), learned how high my heart rate hit (max 214, average 169) and how many calories I burned (380) and I maintained a 10:00 pace and a 5.5 speed. 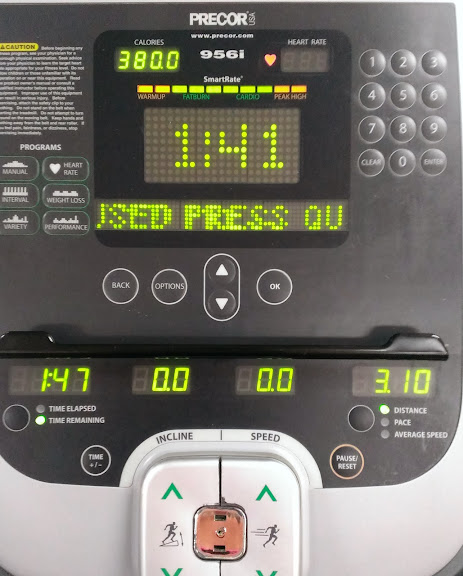 The Kastor Asics plan does not recommend speedwork, just distance and time on feet. Therefore, for the next six weeks, I will not have Track Tuesday times to share. Tomorrow, the plan suggests 10 miles. Since it will be so cold again at 5 a.m., I may run at lunch time tomorrow to avoid the frigid Florida temps. I will swap the Thursday and Friday runs so that I can run 6 miles with the Striders on Thursday again. I really miss those fun group runs!

What’s on your race calendar this year? Any new challenges or distances? Have you ever followed a running crash course training plan, like the Kastor Asics plan?