In the true spirit of Halloween, things got a bit manic around here. Since the school’s fall festival fell on the day before Halloween, the kids’ school decided to bump the Halloween parties and storybook character parade to the week BEFORE Halloween. (The parade is never a traditional Halloween parade. It’s a PC include everyone thing. Don’t ask.)

And since the school borrows the high school’s parking lot, the school always plans the festival on the high school’s Away Football Game Night. Therefore, that night happened to be the night before Halloween. Honestly, it seemed like a fine plan until I realized I had to have the kids’ costumes together a week early. #ParentingFail

So, we dug through our dress up boxes and stowed away costumes to find something that would work. Little Lion Liam really, really wanted to be an airplane again, but ironically we do not own one plane book. (How is that even possible?! Guess what will be in his Christmas stocking this year?) 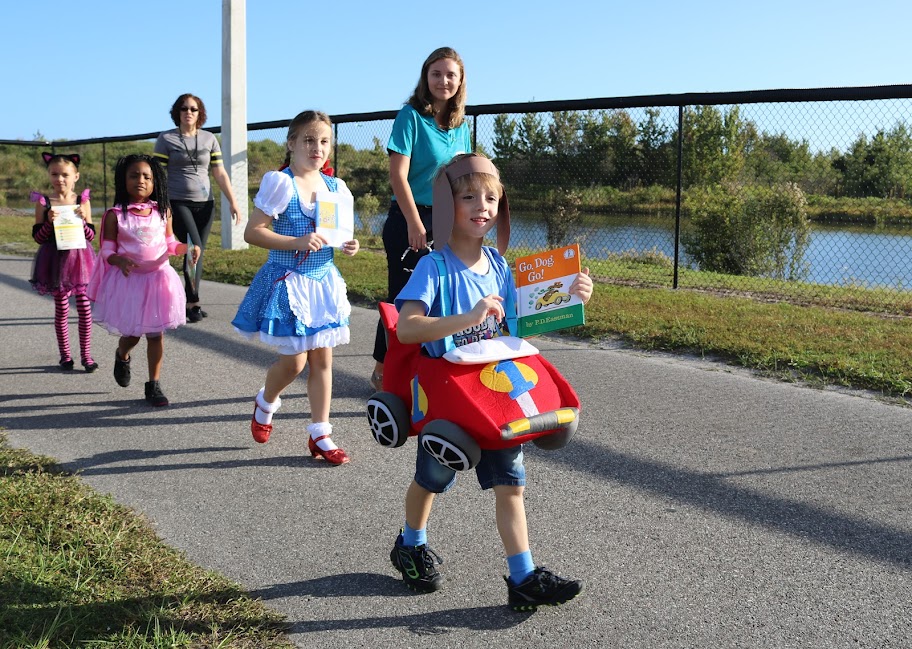 But, I finally convinced him that he could be a race car and wear construction paper dog ears to be a character from Go Dog. Go!  Thankfully, he loved that idea. 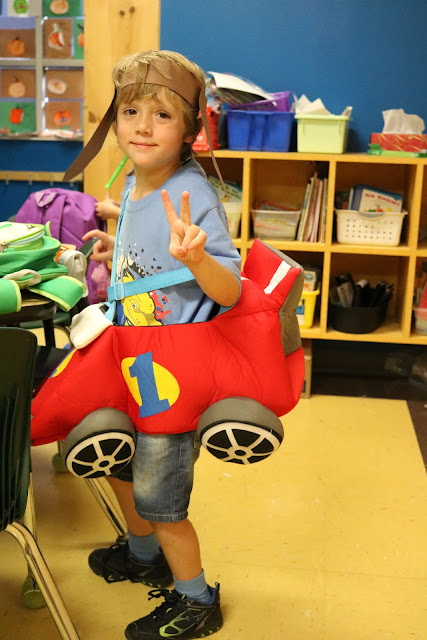 Emmalynn’s was simple. She is really into the Harry Potter series and wanted to dress as Luna. Sadly, my Gaga wig was a disaster! We couldn’t comb the knots out of the wig and I didn’t have time to buy a replacement. Another #ParentingFail. So, she would have to be Hermoine, our favorite harry Potter heroine.  But then, I had the clever idea. “What if you wear cat ears to represent the time Hermoine accidently turned herself into a cat drinking the Polyjuice potion in the Harry Potter and the Chamber of Secrets?” 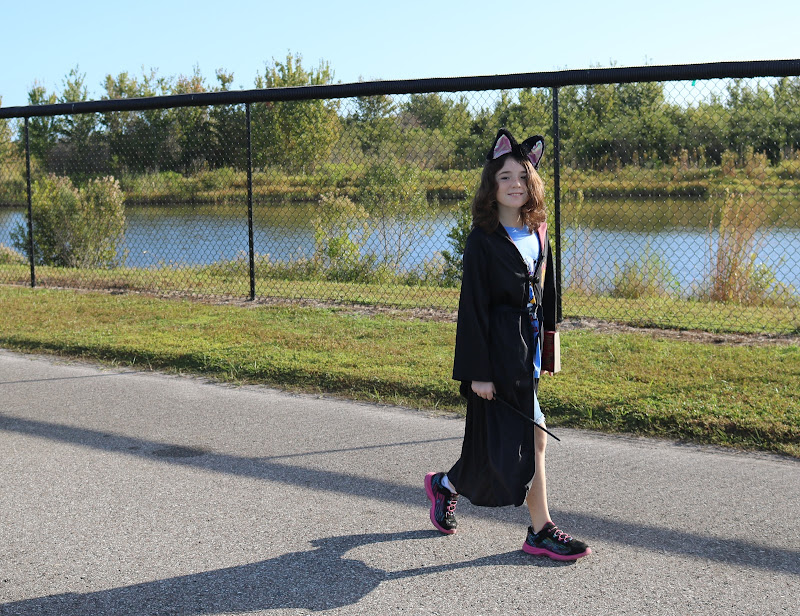 Of course, she loved that idea! And she stood out among the other Harry Potter characters. 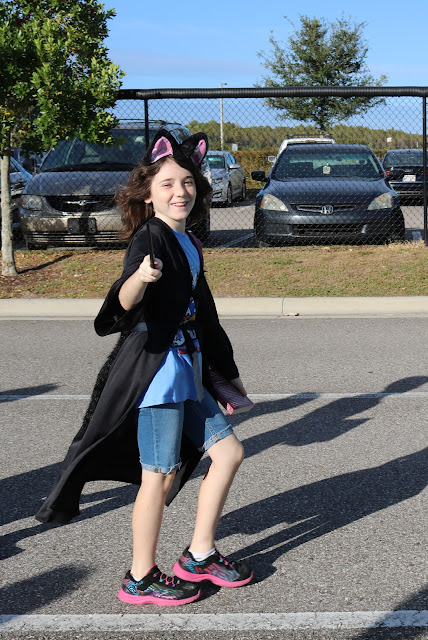 Since Allana is in middle school, the older students do not participate in the parade. I’m really going to miss Emmalynn in these parades when she enters middle school next year.

The day of Halloween we celebrated Allana’s fourteenth birthday, another #HappyHallowTeen. We invited her friends, our family and neighbors for Halloween tailgate complete with a cookout menu of burgers, hot dogs and wings. 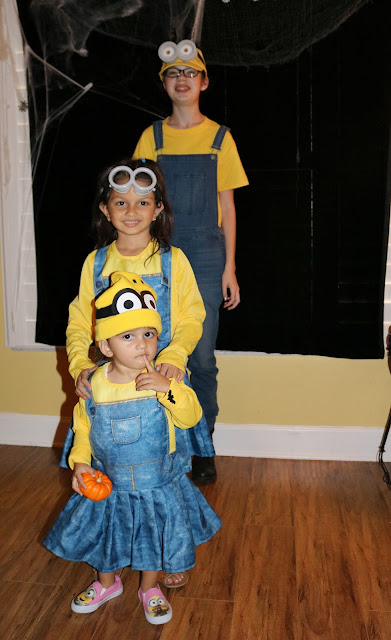 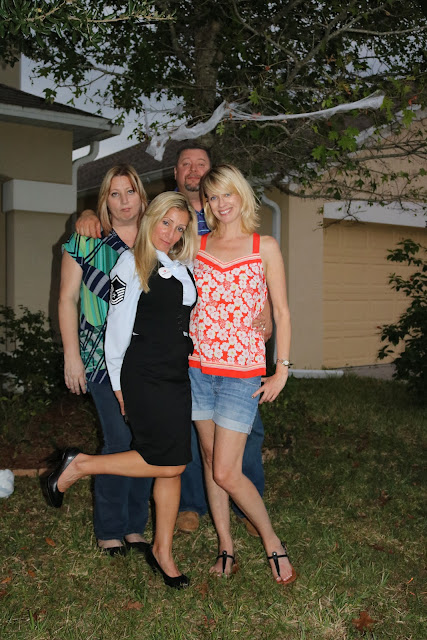 For party decorations, Allana became quite the Gothic Martha Stewart finding frugal ways to decorate with some garbage bags, mason jars, fake spider webs and dry erase markers to black out the eyes in our family portraits. 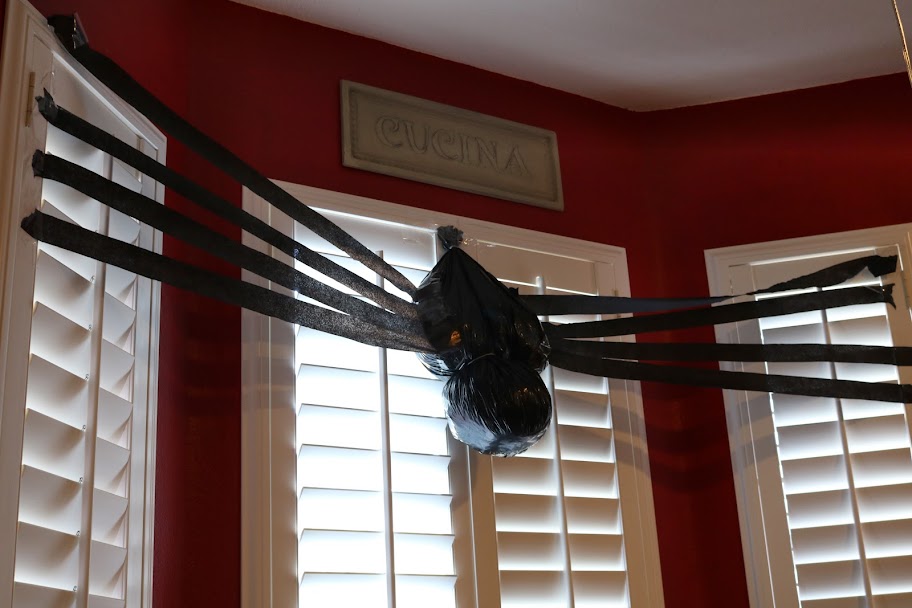 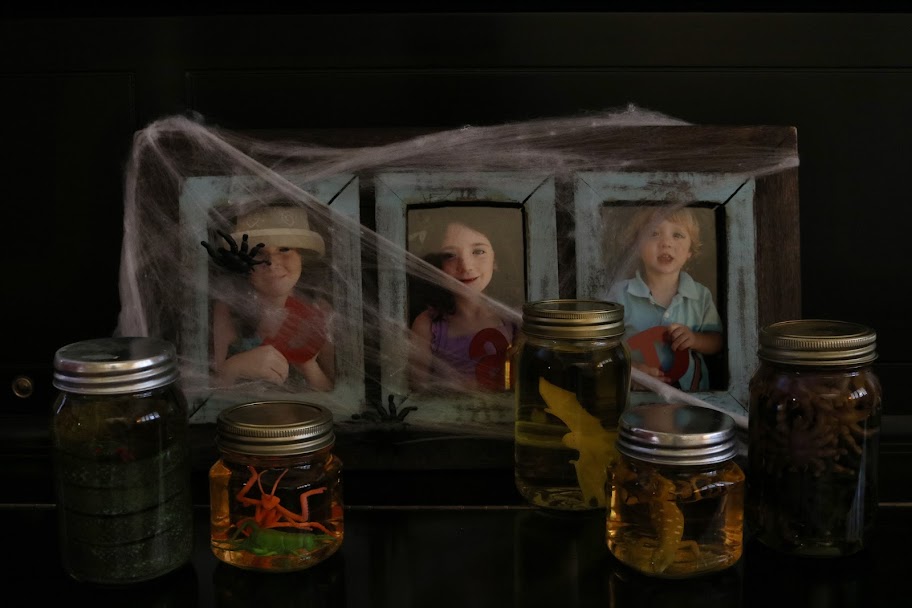 Allana and her friends are into anime, comic books and other “fandoms”, as Allana calls it and Allana led the fandom pack dressed as Lorna from Over the Garden Wall. This costume was a blast to throw together with items we found at Goodwill and my old Little House on the Prairie costume from my childhood.  The mask was a lucky find at Party City and really pulled the look together. 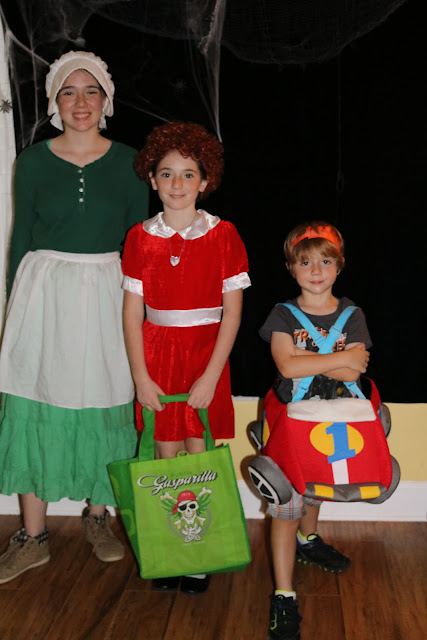 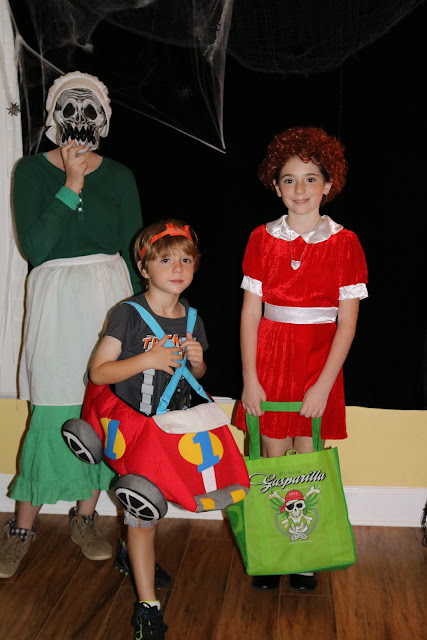 Since Emmalynn wanted to dress as Annie, there was no escaping buying her costume. Liam happily dressed as a race car once again with a slight modification that apparently “makes (him) go faster”. 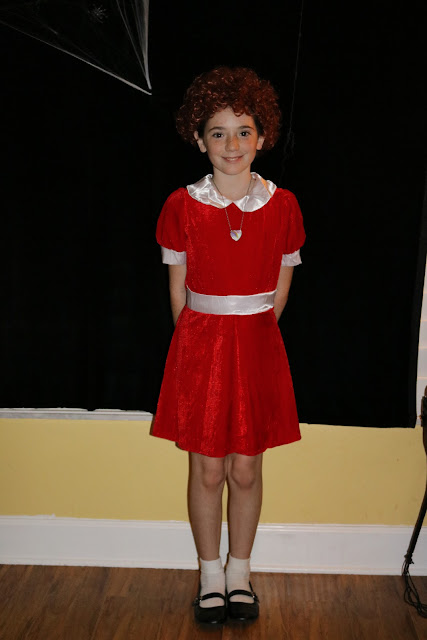 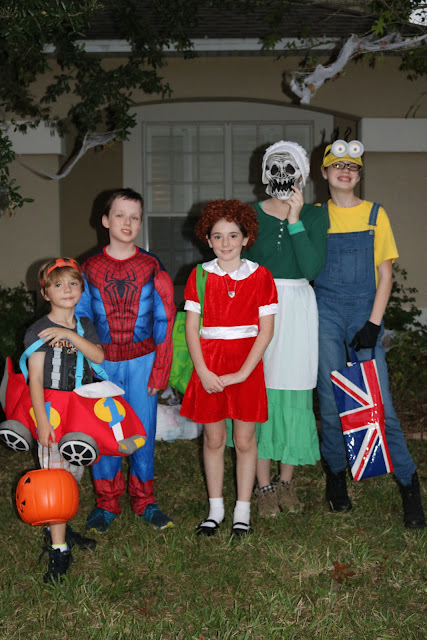 Allan and I dressed as Uku and Lele the volcanoes from Disney’s Pixar Short, Lava. The animated short was featured this summer before the Inside Out showings. In my opinion,both films are one of the best Pixar films thus far, but honestly I can’t listen to the song Lava without crying. I love it that much! And for that reason, it just seemed like the perfect and easiest costume to pull off! 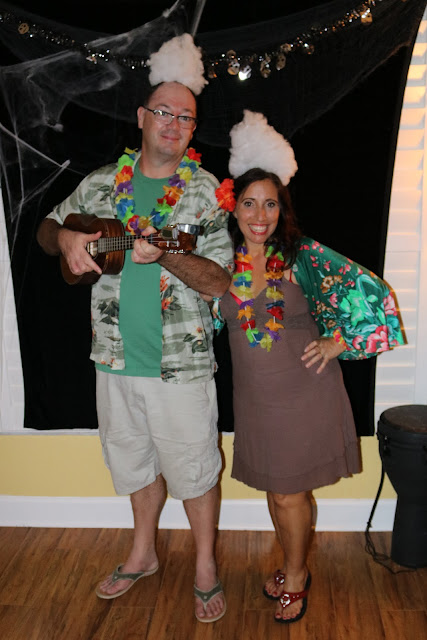 With a few leis, some green Hawaiian tops I found at Goodwill and a bit of Poly-Fil stuffing for our smoke, we definitely looked like “someone to lava” volcanoes. Allan even learned to play the song on his ukulele.

Of course, we finished the evening with trick-or-treating, although, Allana is at the age where she is too cool to trick-or-treat with the little kids. 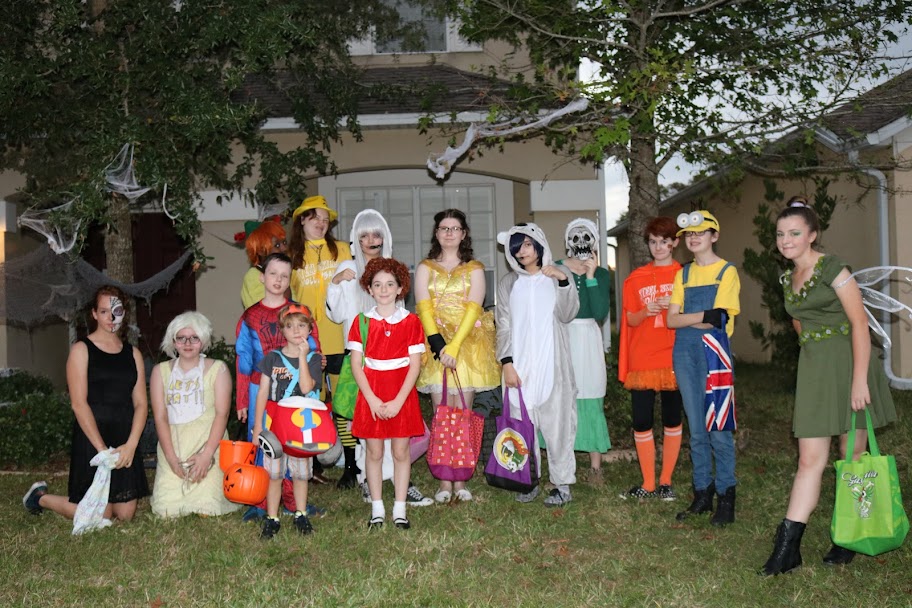 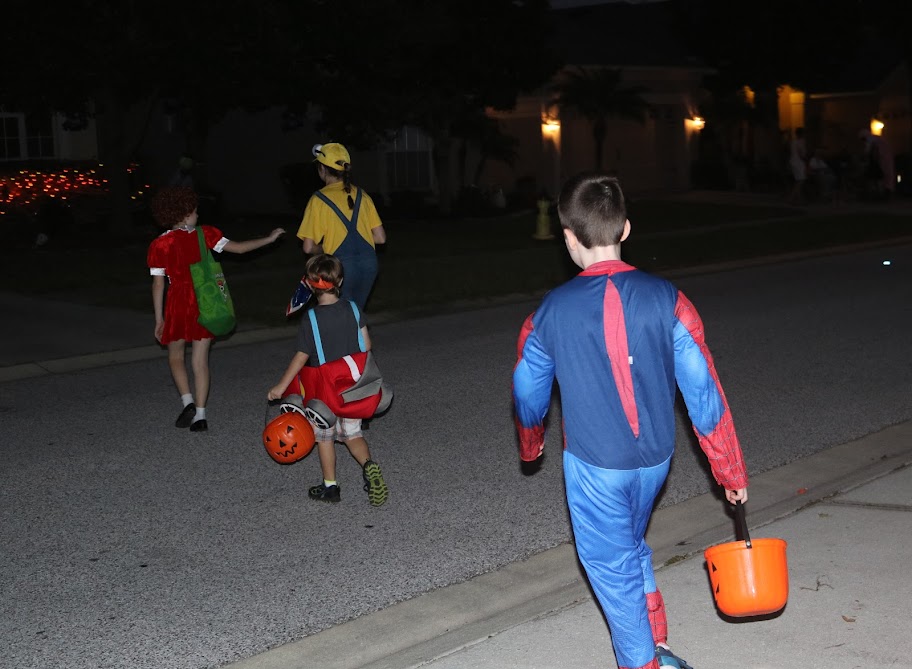 But can anyone ever be too cool or too old for trick-or-treating? I certainly hope not. 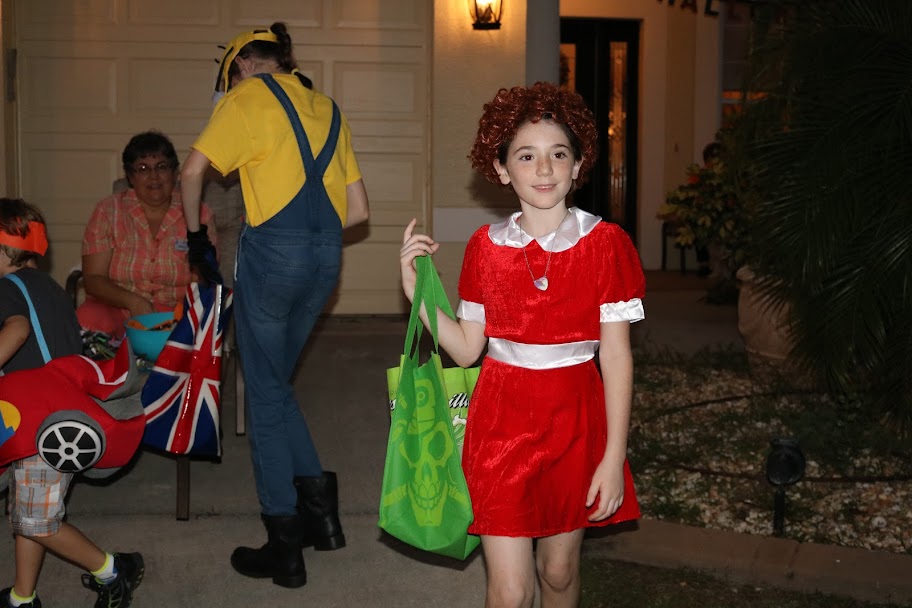