I had heard horror stories about how hot the Rap River Run could be.  And even though, I drank a lot of beer the night before, I still tried to keep hydrated with some good old fashioned H2O before the race and I hoped I wouldn’t sweat out Sierra Nevada during the race.

When I returned home from the Oldsmar Tap House, my girls were still awake at 10:00, but thankfully followed directions by wearing their running clothes to bed instead of pajamas.  They would get sweaty anyway and we didn’t have time in the morning to play around.

After staying up so late, I didn’t expect them to jump out of bed at 6:30 like they did that morning.  I honestly thought they would choose to sleep in and skip the race.  Although they jumped out of bed, somehow they weren’t as quick with brushing their teeth and hair and it took another 20 minutes to get out of the house.  There was no way around it.  We were going to be late to the race.

Plus, we still need to register for the race.  For whatever reason, I kept forgetting to register for this race.  Perhaps subconsciously I was worried about my performance after running the Oldsmar Tap House 5K the night before and the reason registering for it kept slipping my mind.  Arriving at the event with only minutes to spare, I wished I had preregistered.

Once registered, I dumped our things off at the Suncoast Running tent and dashed off to the start line.  But we couldn’t find it and the race had already started.

The girls and I jumped into the course and started running in the same direction as everyone else.  I had no idea how far into the race we were, but we just kept running.  Once around the lake, we found the 1 mile start line.  Now we could officially start the race. 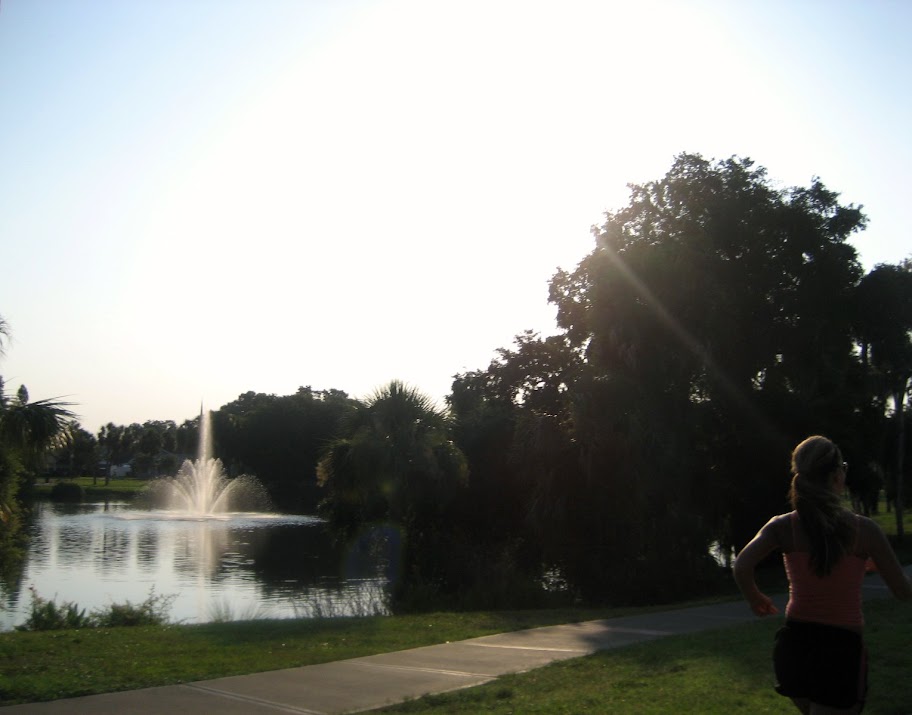 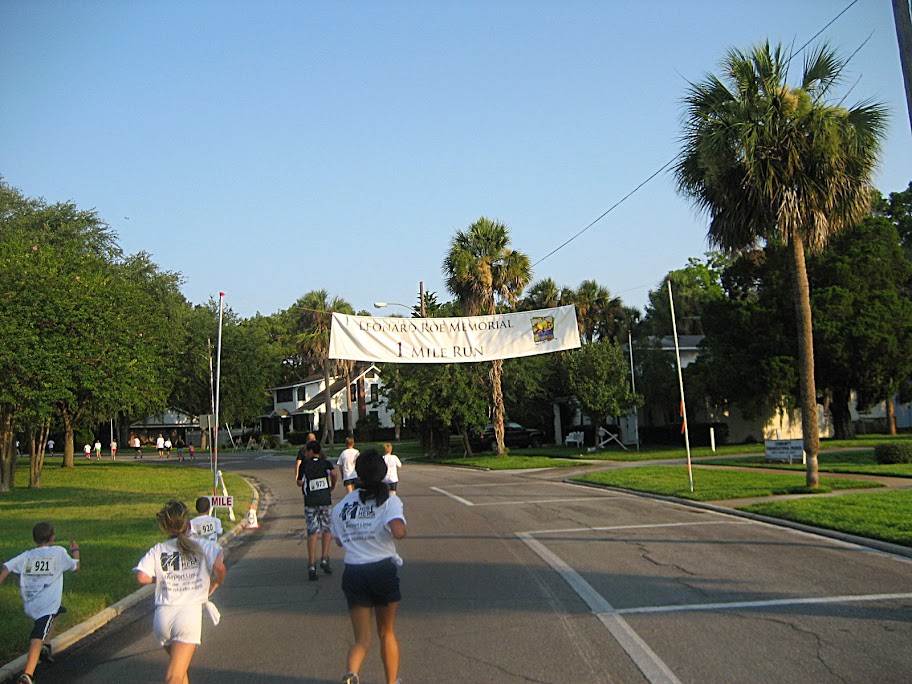 We ran the course twice.  Allana had a nice easy pace going.  Emmalynn needed a little more coaxing and to hold my hand as she ran.  By the second time around the lake, we really needed to pick up the pace because the 5K race was only minutes away from starting.

I must have sounded like a lunatic, because a heavy set elderly woman who speed walking along side of us thought I was hollering at her.  In a nasty tone, she hollered back, “I’m doing the best I can.  I don’t care about the next race!”

In apologetic tone I replied, “I wasn’t talking to you.  I was talking to my girls.  They need to hurry because I need to get to the next race.  But you’re doing great!  Keep it up, mama!”

Once we crossed the finish line, medals were draped around the girls’ necks which they wore their medals proudly as they headed back to Suncoast Running and I dashed off to the 5K start line with only seconds to spare.  I didn’t even get a chance to rehydrate and hoped I wouldn’t overheat. 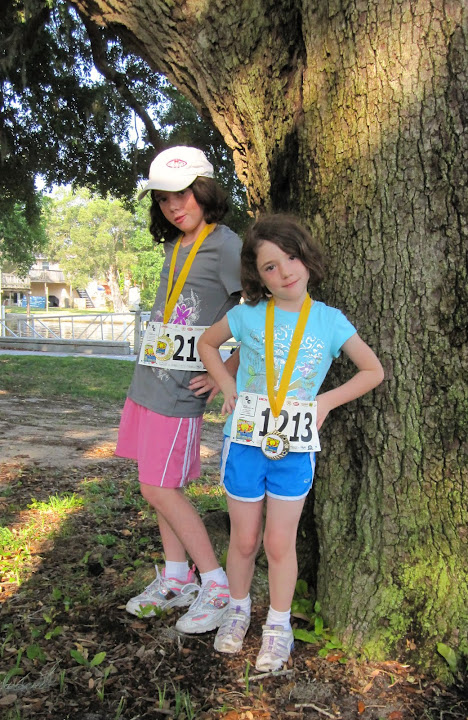 Much like the Crazy Sombrero, I believe the 1 mile easy warm-up run really helped my performance.  The first mile is always the toughest for me, but once the juices start flowing and my muscles warm up, I feel like I can go miles without stopping. 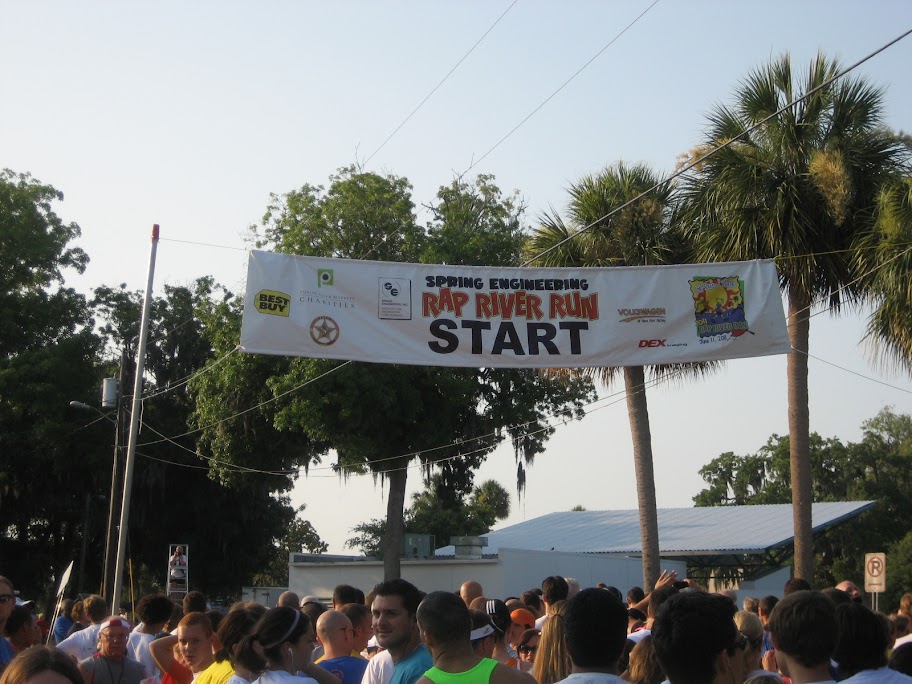 Large old oak trees shaded the flat road course through downtown New Port Richey as a light breeze from the Cotee River cooled us.  So far, thankfully the horror stories of heat seemed to be more of a legend than any reality. 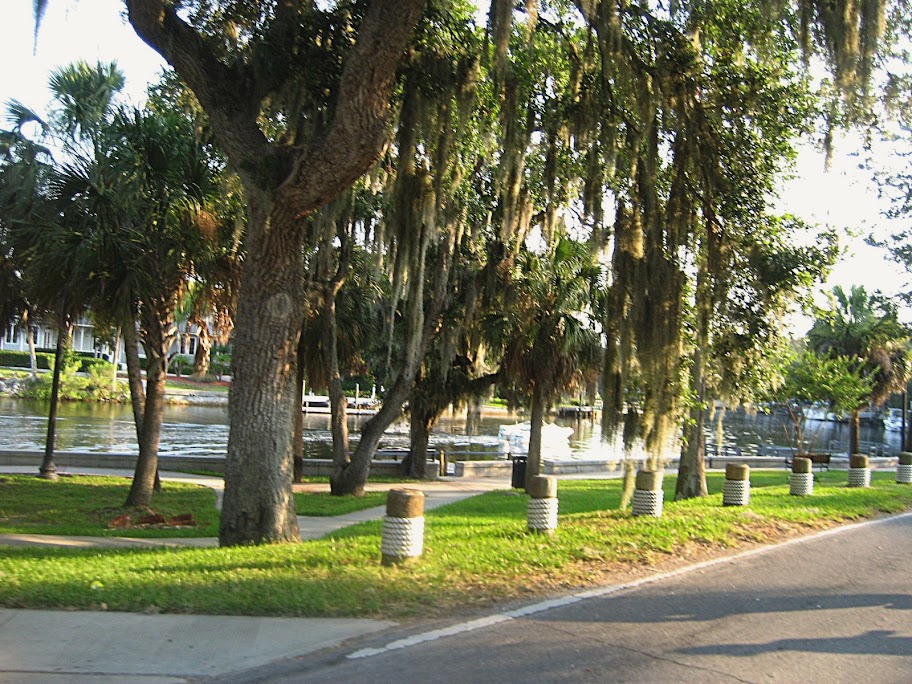 About half way into the race, a water station emerged.  I greedily dumped two cups on me and then drank another two.  After a small loop in the course and close to two miles, I found my way back to the water station again and I gulped down two more cups. 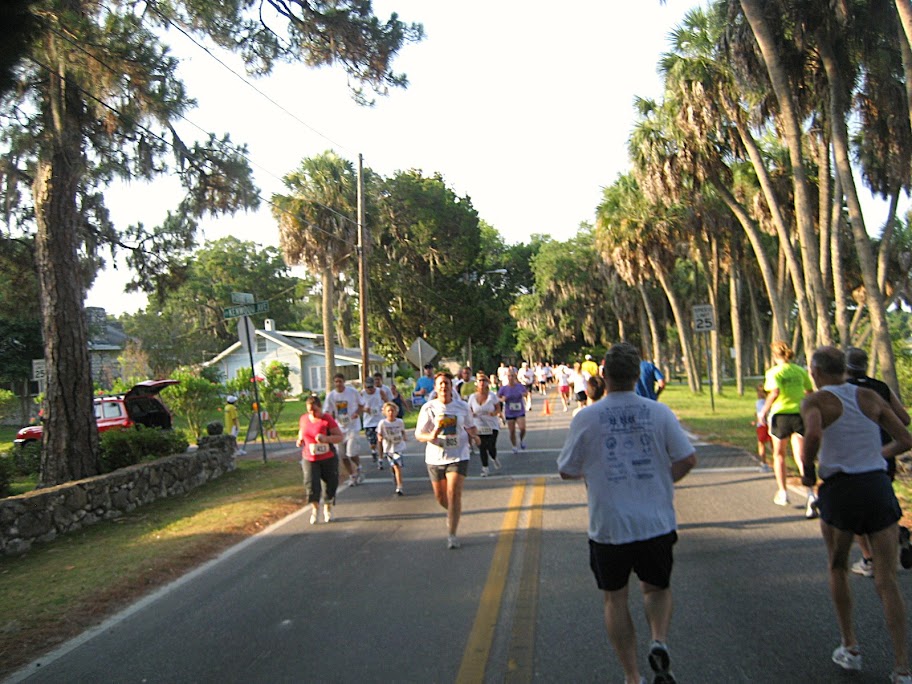 Soon after, I spotted the start line in the distance and another 0.25 mile loop around the lake remained until the finish line.  I pushed my tired legs even harder and sprinted to the finish line.  I was rewarded with an Ice Pop and a medal for my efforts.  The Ice Pop was a nice touch.

Much like the decent race weather, the post-race party was an unexpected but pleasant surprise.  The girls were excited to be part of a real race that including a timing chip and a kid-friendly post-race party.  A smorgasbord of tasty treats were provided by Smoothie King, Carrabba’s, Sweet Tomatoes, Beef O’Brady’s and Sonny’s.  It was a great event and we will definitely be back next year. 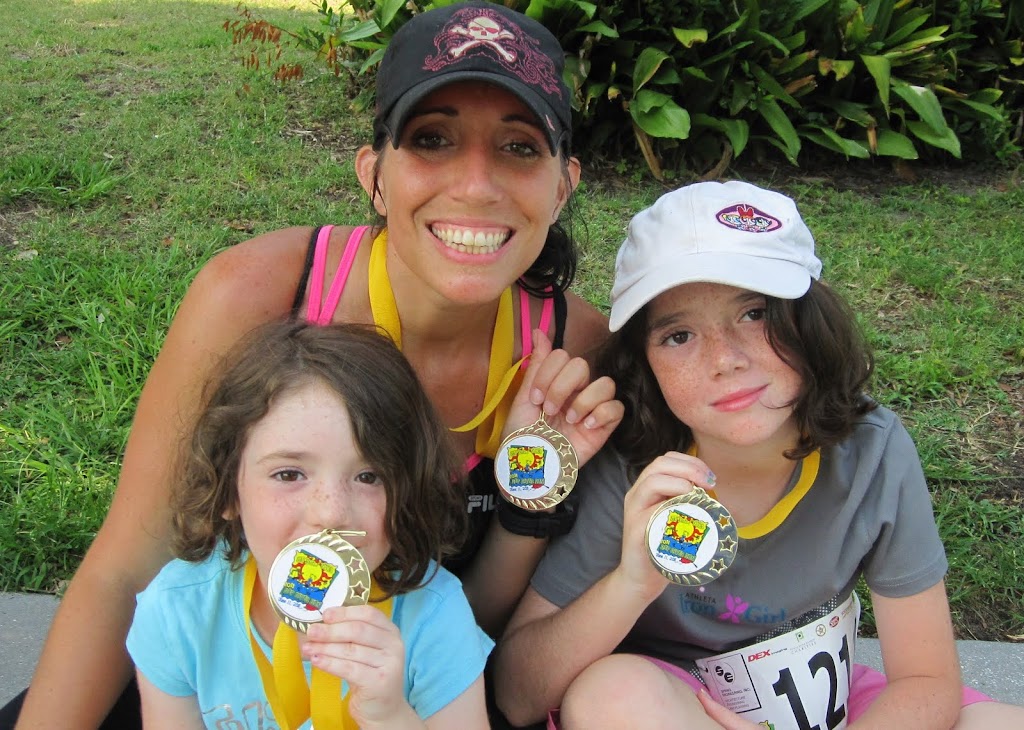 Among the thousands of participants, I saw many familiar faces, including those of the Suncoast Striders.  There were also the unfamiliar faces of foster children throughout the event, which quietly reminded us why we were here other than our love for running. 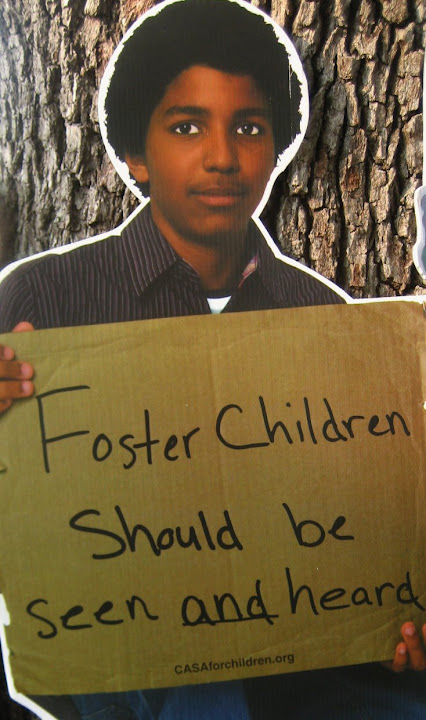 To learn more about the RAP House and the other wonderful program provided by Youth and Family Alternatives, visit www.rapriverrun.com.