On the morning of the tri, I was nervous and anxious, but it didn’t consume me. I felt the same level of nervousness I experience before any race.  I trained as much as I could, although I wish I had ridden my bike more.

When we arrived at transition, I racked my bike and laid out all my belongings to make my transitions between legs a smooth operation. I set my Garmin for bike mode and then we posed for photos, of course.  My friends Chrissy and Maribel as well as several Suncoast Striders were competing in the tri sprint. 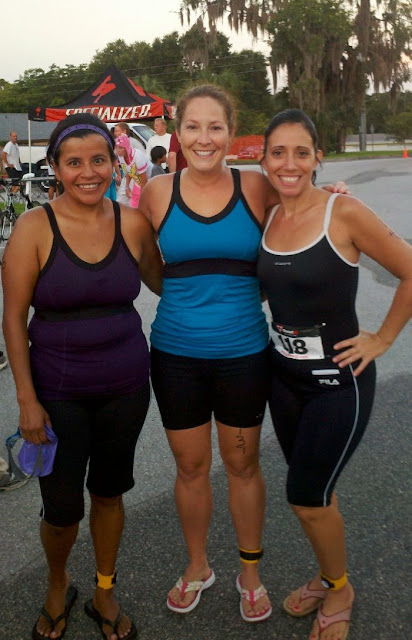 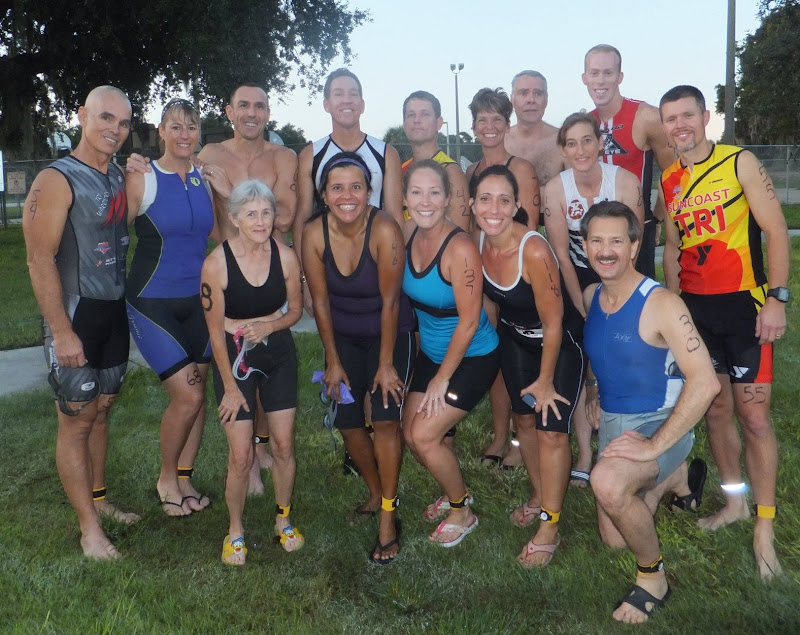 After a quick potty break, we lined up for the swim and the start of the tri.  I felt really confident about the swim. I knew this was a strong area for me.  Once in the pool, I passed several others who started before me.

The run back to transition was a few yards through grass but thankfully, I hid my Spenco flip-flops outside the pool area for the run to protect my plantar fasciitis feet.  If I ran barefoot, I would pay for it later.

My transition from swim to bike went smooth, but it could have been better and faster, which is always an area I struggle with.  Someday I’ll train just my transition.

Then, Maribel and Chrissy passed me.  I could see Chrissy’s blue top in the distance but I just couldn’t catch her.  Not before long, she was gone from my sight completely.

For the bike, we circled nine miles through the streets of downtown New Port Richey, past my old middle school and other haunts from my childhood.  There were some really decent “hills” through the course, which always shocks me because I don’t remember New Port Richey being a hilly terrain.  Although, whenever I’m participating in a race in New Port Richey I remember the hills and how much I hate them from previous races and how my current home of Land O’Lakes is so flat.  With every struggling push to get up the hills, I reminded myself once again why I need to train for hills.

The streets were not blocked off from traffic, but I was mentally prepared for that. Though there were police officers and sheriffs halting traffic for the cyclists passing through, I entered each intersection cautiously because I still don’t trust drivers and my instincts were right.   I saw one officer yell at a driver for not stopping.  So, at each intersection, I slowed down just to be sure it was clear which may have affected my time, but I’m ok with that.

The second time around the loop, I worried about missing the road back to transition.  I thought I had passed it and began to panic.  I started calling out, “Where’s the turn?!”  And volunteers assured me it was two blocks ahead.  I took a deep breath to come my nerves and turned to head back to transition.  Only the run was left but not before my dismount, which I executed beautifully.

Once back into transition, I grabbed my hat and set my Garmin to the run setting, but I forgot to hit start which I remembered to do about a quarter mile into the run.  At that moment, I thought about eating a Cliff shot, but I decided to wait for a water station.

And then, the hills hit me again.  I really need to train for hills desperately.

Eventually, I caught up with the people who passed me on the bike, but I couldn’t catch Chrissy.  She appeared to be at least a couple minutes ahead of me.  I paced with quite a few people which I needed since I didn’t have any music to push me along.  That helped me tremendously until we reached a water station and I took a brief break from the heat and hills.  So, I walked for just a bit while gulping down water.

In time, I caught up to Maribel and then we were almost to the finish with just one more hill to do.  I forced myself to pick up the pace and finish strong. I even had some sprint left in me.

It felt good to finish.

It felt really good to not fall off my bike. (Hopefully I’m passed that stage.)

But it really felt good to prove to myself that I can do this again.

But it felt really, really good to beat my time from four years ago by 23 minutes. 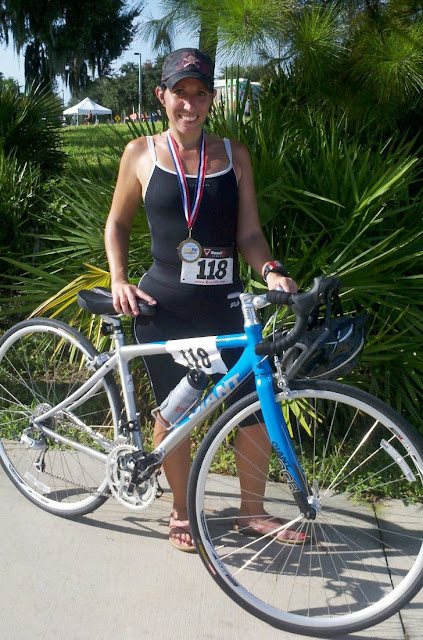 As for Chrissy and Maribel, they did an incredible job and finished first and second in their division. 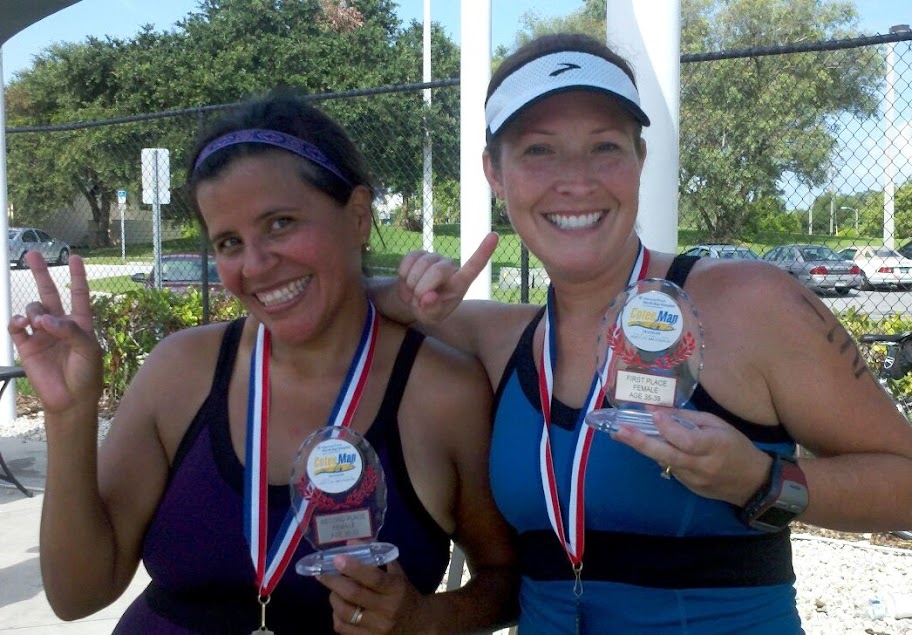 So, when’s the next one, ladies? 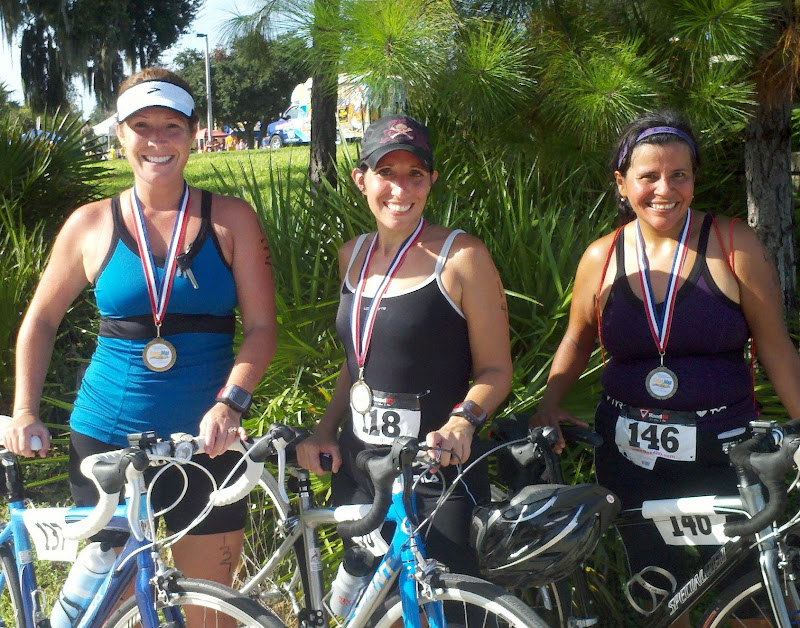