Last month, my family and I were invited to tour the Clearwater Marine Aquarium  (CMA) as a part of a partnership with Grace Hill Media and the Tampa Bay Bloggers to promote the upcoming film, Dolphin Tale 2, which splashes into theaters on Friday, September 12. 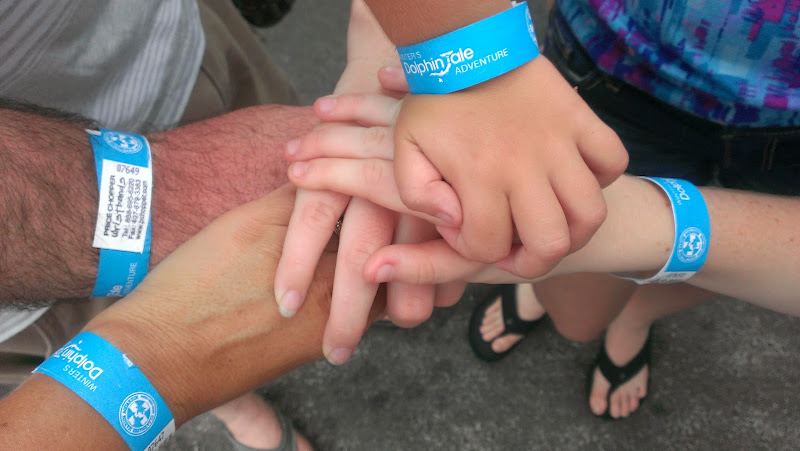 Although my family and I have visited CMA many times before, we were amazed by all the expansions, including the movie sets. 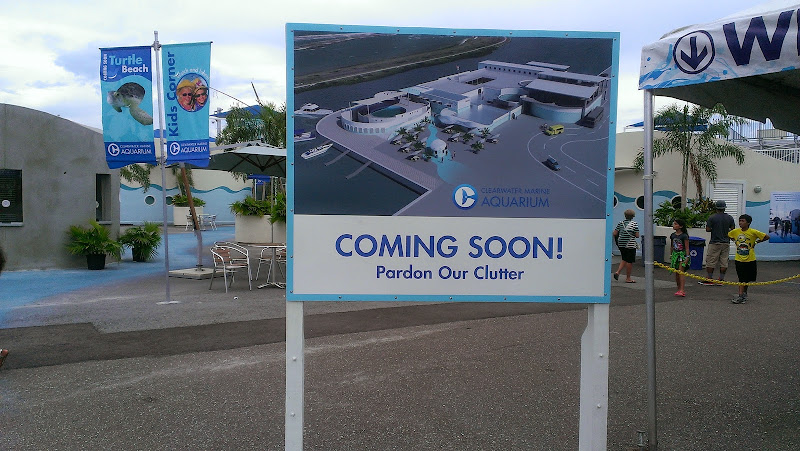 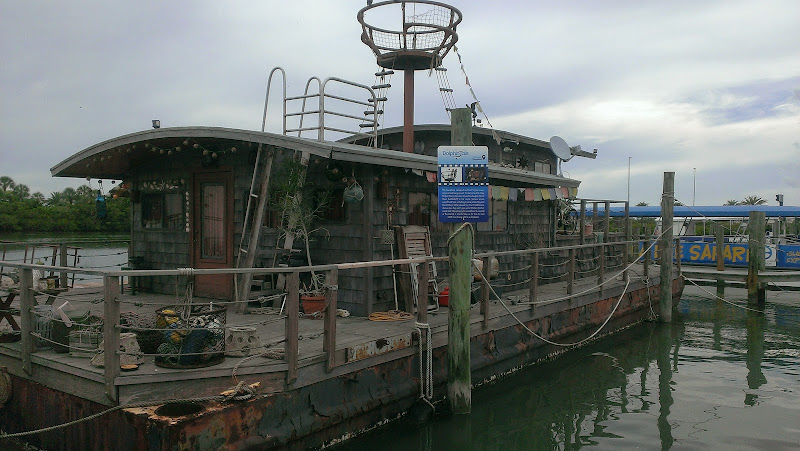 Our Dolphin Tale 2 visit enlightened us with new knowledge about Winter and her life at CMA. Our tour began upstairs in a classroom setting overlooking the Clearwater Marina where we met CEO, David Yates, who shared the story about how Winter came to be CMA’s famous permanent resident. 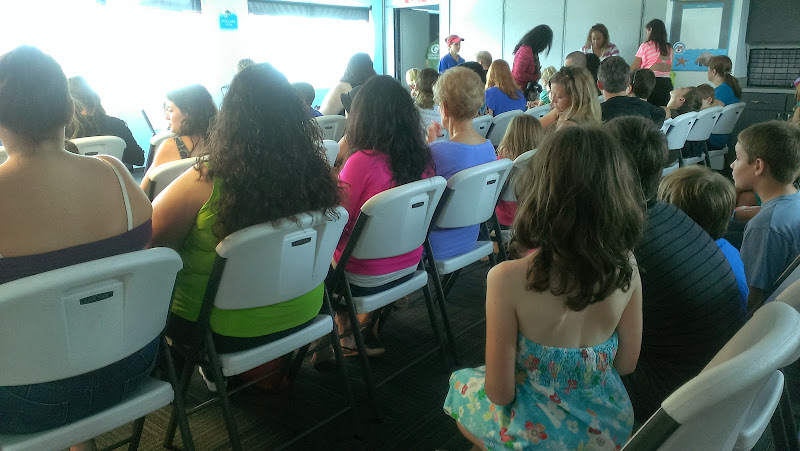 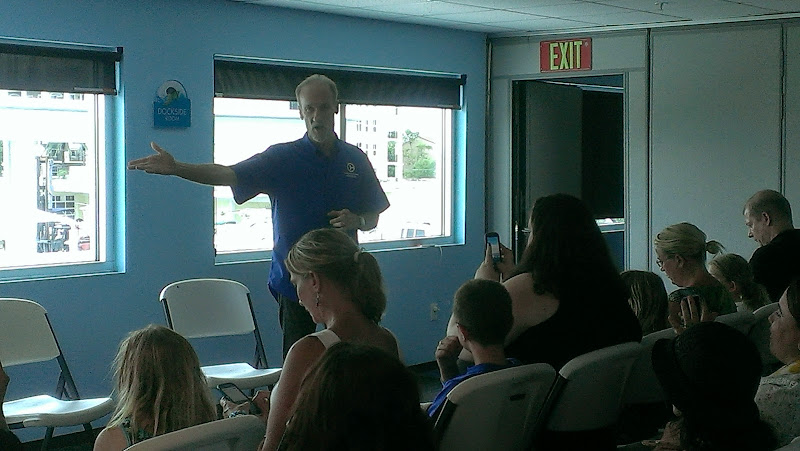 As a young calf, Winter was entangled in a crab trap and stranded near Cape Canaveral, Florida.  While entangled, the crab trap line cut off circulation to her tail flukes and a portion of her perduncle.  Once free, she was transported to CMA for treatment of her extensive injuries, however, her tail deteriorated and it could not be saved. 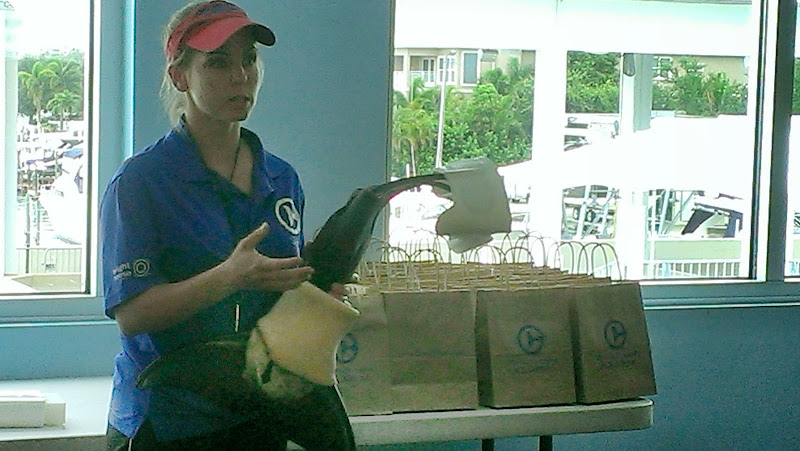 Through the relentless efforts of Hanger Prosthetics and Orthotics, Inc., Dr. Mike Walsh, CMA’s marine mammal veterinarian and trainers, they developed a unique plan to attach a prosthetic tail to Winter. Whereas most dolphins would not survive in such overwhelming odds, Winter’s energy and ability to adapt to her new physical form surpassed everyone’s expectations. She healed completely and adapted to a new swim pattern. During the Q&A portion, we learned that Winter receives a new a tale every four months. 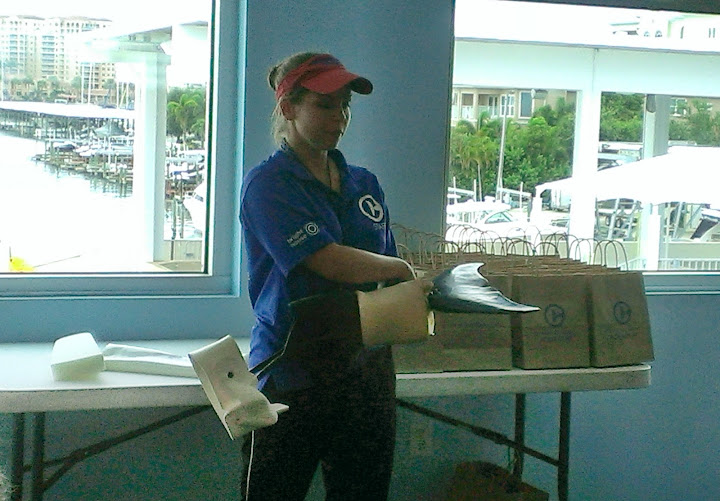 With the aid of her trainer, Winter undergoes extensive physical therapy and stretching to prevent long term issues, such as scoliosis. Her trainer corrects Winter to use proper range of motion (up and down) when she “cheats” and swims side to side. 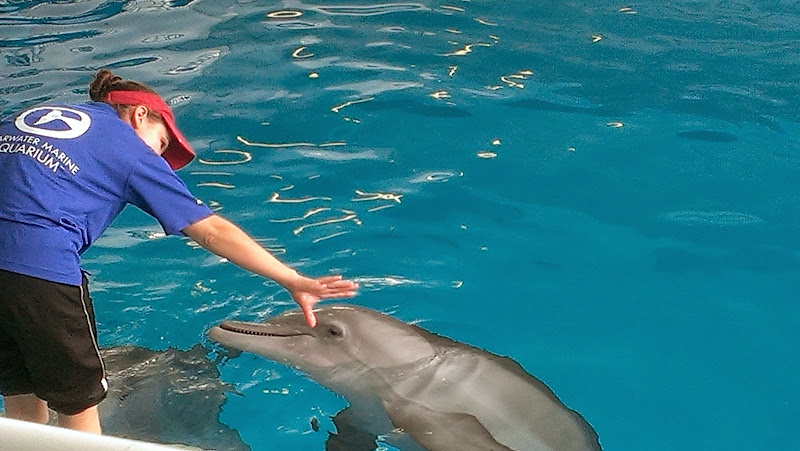 Mr. Yates also shared the core mission of the CMA: rescue, rehabilitate and release, however, in some severe cases release would be a far worse existence. 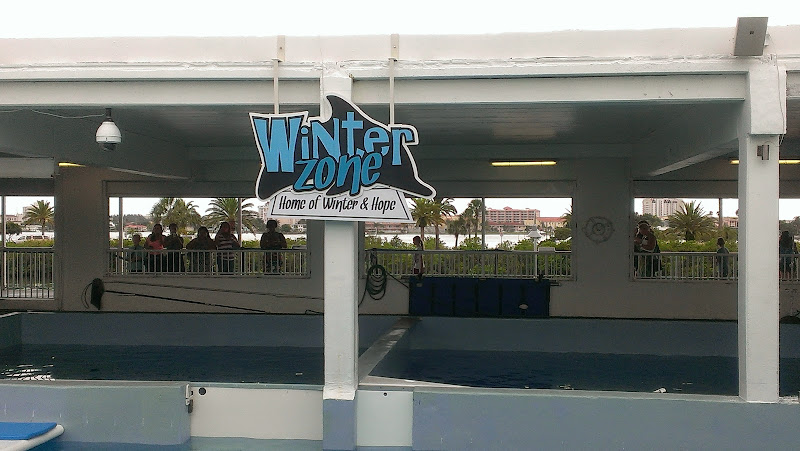 As a permanent resident of CMA, Winter is loved and her amazing story of survival has inspired millions, including burn victims, Wounded Warriors and Winter Kids. All visitors have a strong connection to Winter. 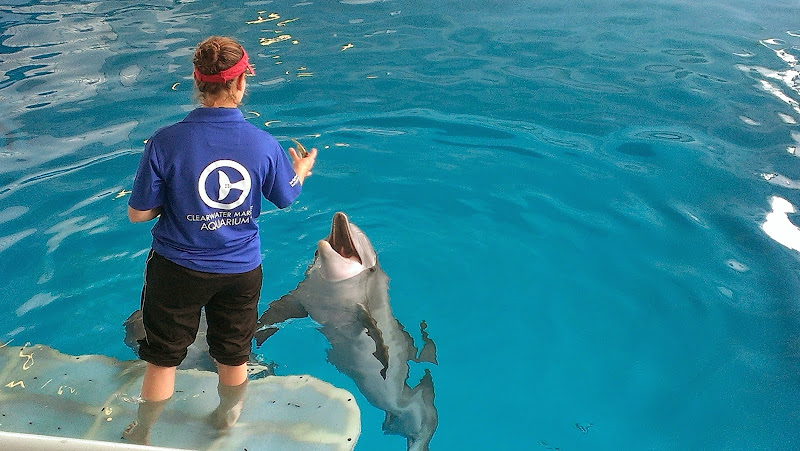 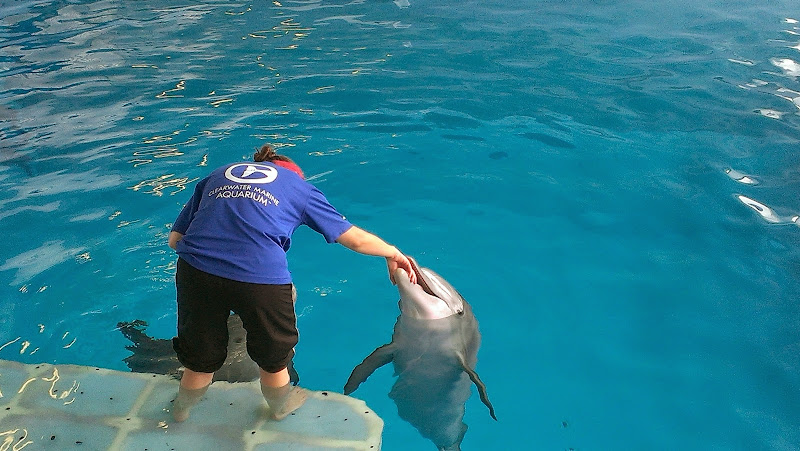 Enter Hope a three month old calf, who arrived almost 5 years and 1 day later from Winter’s historical rescue. On the evening of the Dolphin Tale wrap-up party, the cast watched the outstanding efforts of the CMA team and knew it was a sequel in the making! 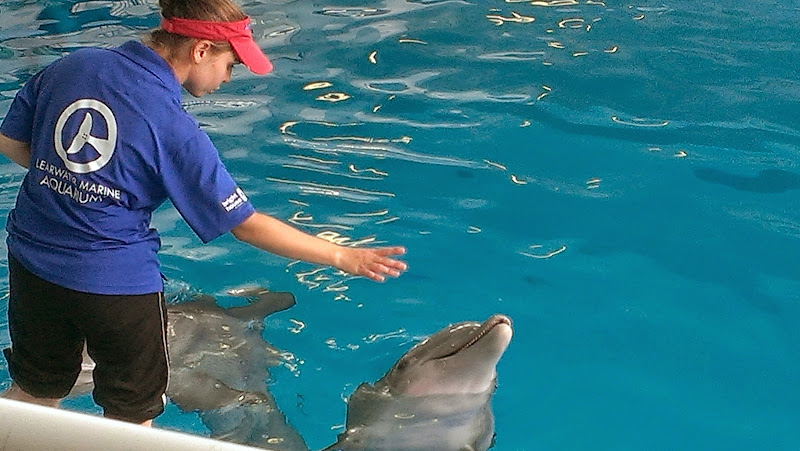 The orphaned Hope lacked a herd and the means to survive in the wild. Once the two became acclimated, it was obvious that two would become fast friends. From then on, Winter has Hope.

Our tour led us through the facility where we witnessed Winter and Hope in action. We also met some other resident named, Nicolas, who play Mandy in Dolphin Tale 2. 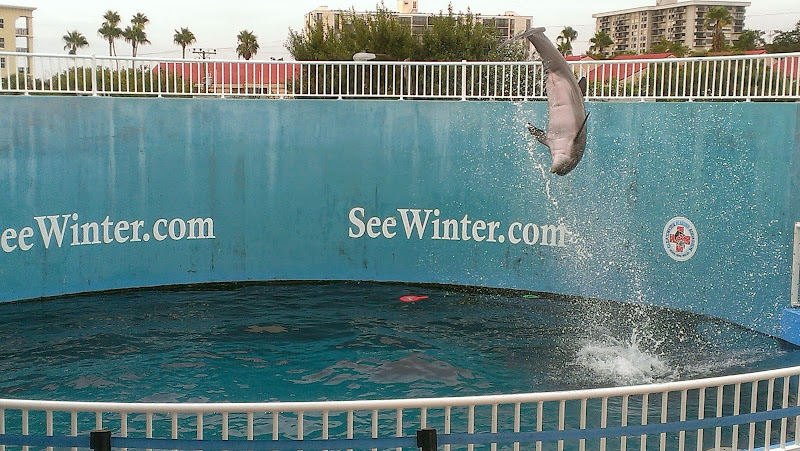 Upon exiting the facility on our way to the Dolphin Tale 2 screening, I asked a handsome gentleman to snap a photo of my family, not realizing it was Austin Stowell, who plays Kyle in the movie. After a good laugh and being a good sport, he posed for a photo with us. 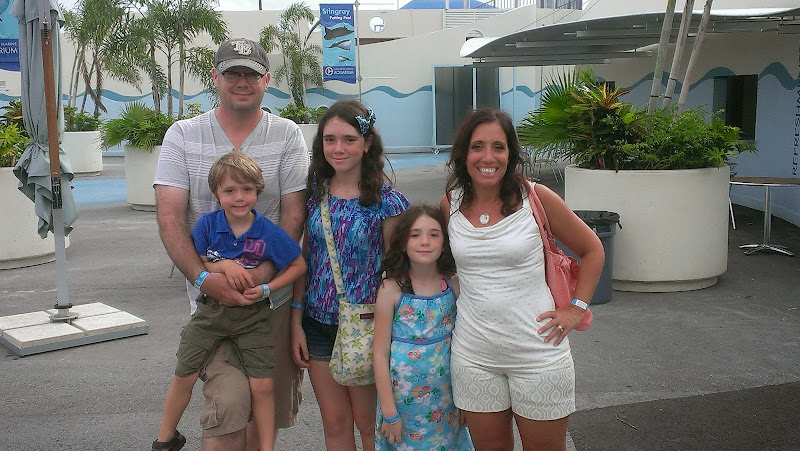 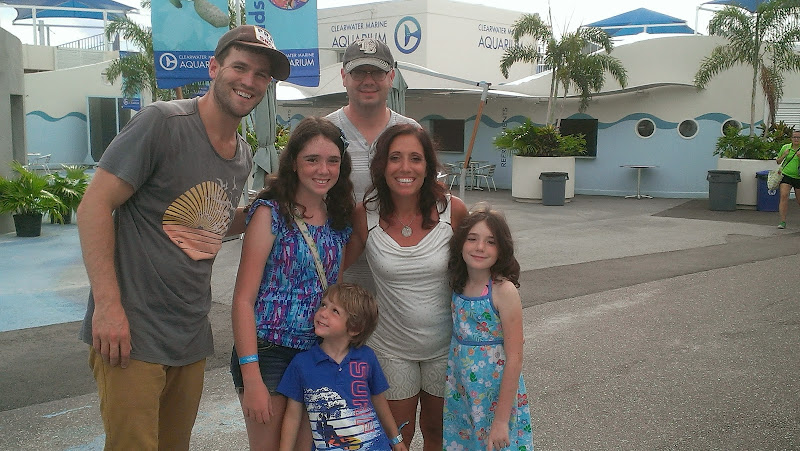 Later that evening, I bumped into Austin in the theater for the Dolphin Tale 2 screening and congratulated him on his work in brilliant sequel.

Stay tuned tomorrow for my full Dolphin Tale 2 movie review and press junket with the stars of the film!