About two weeks prior to the Space Coast Marathon, I developed heel spurs or plantar fasciitis, which I believe resulted from running in old shoes.  Everything I read online recommended not running for at least week.  That meant no taper runs and definitely no running at all until I bought new shoes.  Unfortunately, new shoes were not in the budget but thankfully with some Black Friday deals, Suncoast Running made new running more affordable.

Now, I just needed to break in my new shoes two days before my race.  Therefore, I wore my new shoes all day and hoped it would do the trick.

Also two weeks prior to the race, my Garmin died but a new Garmin was definitely NOT in the budget.  At the race expo and packet pick-up, I registered for a pace team to keep me on target for a 5:00 finish time with an average pace of 11:27.

On race day, I arrived at the start an hour before the race with my Suncoast Strider friends.  An early arrival offered enough time to eat breakfast and use the potty an adequate number of times to start the race with an empty bladder.

The start line sat in the middle of Cocoa Village, a quaint little shopping center with a small town feel or so it looked in the dark.  I found my pace team among the crowd in a corral way in the back and we waited patiently for the race to begin.  We were ready for lift off!

The race route led us through the town and south on along the Indian River.  About mile 2, it began to rain and with the rain came some strong wind from the east.  With the rain, there would be no sunrise over the Indian River, but it also meant no sun and that’s a plus.

Then, the road inclined and kept climbing and I cursed myself for not doing any hill training.  Around mile 4, I needed to pee but I was afraid to leave my pace group to wait in line, so I kept running uphill which felt like forever.

At mile 8, I discovered a Star Trek water station with first aid and a vacant port-o-potty.  I reapplied some Vaseline in my underarms and my unmentionables to prevent chaffing and popped into the loo.  At that point, I lost my pace group but “Mr. Spock” gave me plenty encouragement even though it seemed highly illogical.

I guess Spock was right, because the next few miles went well even though I lost my pace group.  At one point, my pace leader surprised me from behind and told me I was right on target to finish in 5 hours.  I mentioned how worried I was when I didn’t see the group any more, but she told me they were running about a minute faster.

Mile 11, I met Dark Helmet and the Space Balls crew.  “May the Schwartz be with you.”

At the half marathon mark, the race route led us through the village back at the starting point, where I spotted the Suncoast Striders cheerleaders.

Physically, I still felt pretty good, but I think this is where I experienced a mental breakdown because visually it felt like I reached the end. With lots of spectators and tons people cheering, the motivation to finish was high.  I stayed strong and even stopped for another photo opp with the I Dream of Jeanie team.

But then, the race turned a dark corner mentally and physically (and visually from the overcast).  I saw all the half marathon finishers run past and realized I was only half way finished.  And then, my heels started hurting.

Although this half of the course was more flat, the damage was already done.  At mile 15, the pain became so intense.  I tweeted, Facebooked and texted to take my mind off the pain.  I needed ibuprofen, but the first aid was still 2 miles away as reported to me by @BigBadEd.

I tried to find inspiration from a blind runner tethered to a running partner or a mom pushing a triple stroller, but the only relief came from walking.  So, I walked the next two miles until I found the first aid.

Once at mile 17 and the first aid tent, I sobbed out the words, “I need ibuprofen.”    I resolved to walk the remained of the race.

Around mile 19, I literally found my Cheeseburger in Paradise at the Parrothead water station as some of the pain began to subside, but it might have been in part to the Jimmy Buffet music that played or the ibuprofen finally kicking in.  I elected to take advantage of one more photo opp before running again, but really it only made me want a shot of tequila and call it a day.

Once I reached mile 20, I decided to try running again.  The finish was only an hour away, if I ran my normal pace.  But this was most certainly NOT my normal pace.  I was hobbling along at what I imagine was a 16:00 mile pace.  Every inch of me hurt from my toes to my left bicep.  Why would my bicep hurt?

Every time I passed a water station, I stopped to dump water on my head to cool myself off and to mask the tears.  But it didn’t stop the ugly cry which was prompted by anyone who said, “You’re doing great!”

It took me an hour and a half to finish those last 6.2 miles, because I ran them…slowly…very, very slowly.  I had to do it. Even if I meant I would be passed by elderly speedwalkers.  I had to finish running.

Water stations were closing up shop.  The race began to appear like a ghost town since most spectators left hours ago but their signs of encouragement still stood.

And I just kept moving forward.  A few people stayed behind to cheer the last of us in.  Their faces are literally a blur as I couldn’t see their faces behind my tears.

I finished the last .2 miles around the park strong and with a smile.  When I crossed the finish line, a Space Coast Volunteer hung a medal around my neck and out came the ugliest cry ever. When I found Allan, I fell into his arms.  I just wanted to go home. 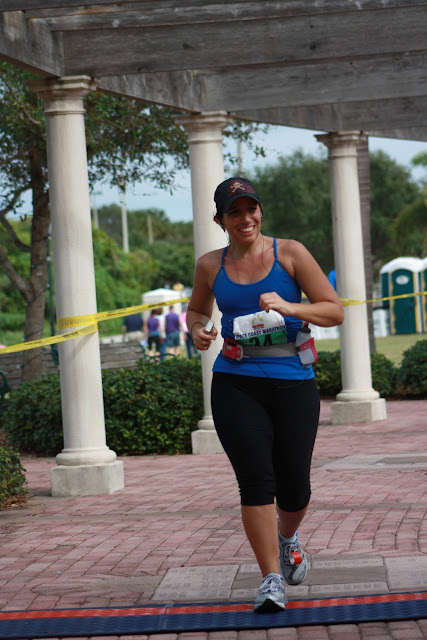 With huge smiles, it was evident my family was proud of me and with those smiles no one who have guessed they waited an extra two hours for me. 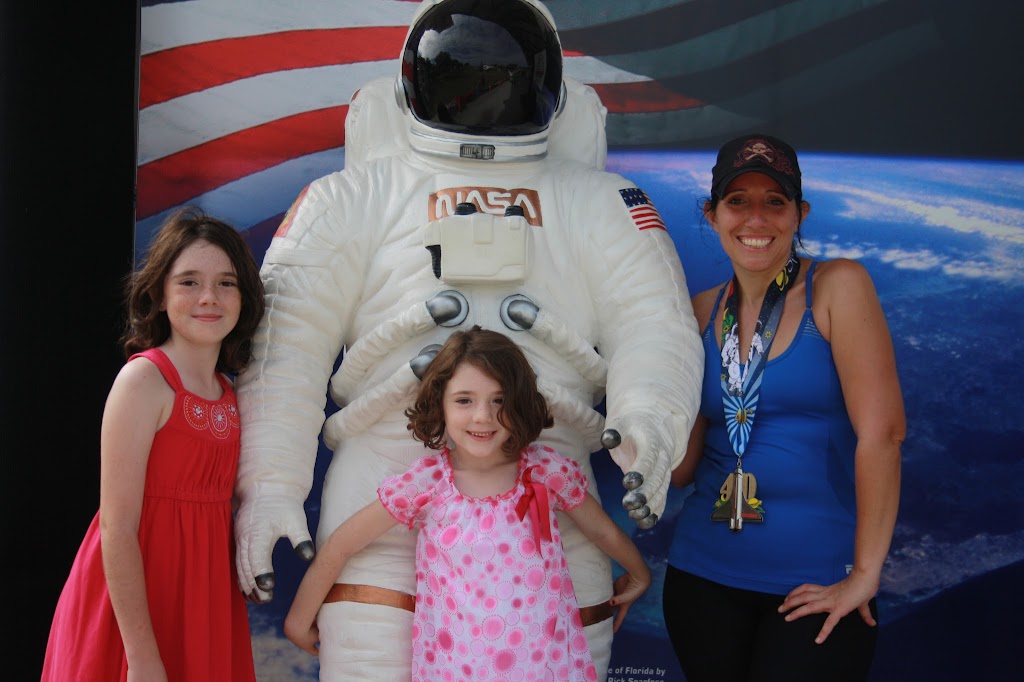 This race may have tested me, but I will get back on the marathon horse again.  I have my sights set on another one next fall, but first I need to cool my heels with the help of a frozen water bottle.  Once these heels and legs (and oddly left bicep) heal, there will be lots of hill training and speed work in the days to come.

“Gentlemen, we can rebuild her. We have the technology. We can make her better than she was before.  Better…stronger…faster.”  – The Six Million Dollar Run DMT