Simply striving to qualify for Bronze Level Marathon Maniacs, Chrissy, Larisa, Marie and I had no real strategy or finish time in mind for the Clearwater Marathon.  After completing the Disney Marathon a week earlier, we anticipated taking many walking breaks throughout the course.  With three large bridges in the first half of the course, we already planned to walk those. 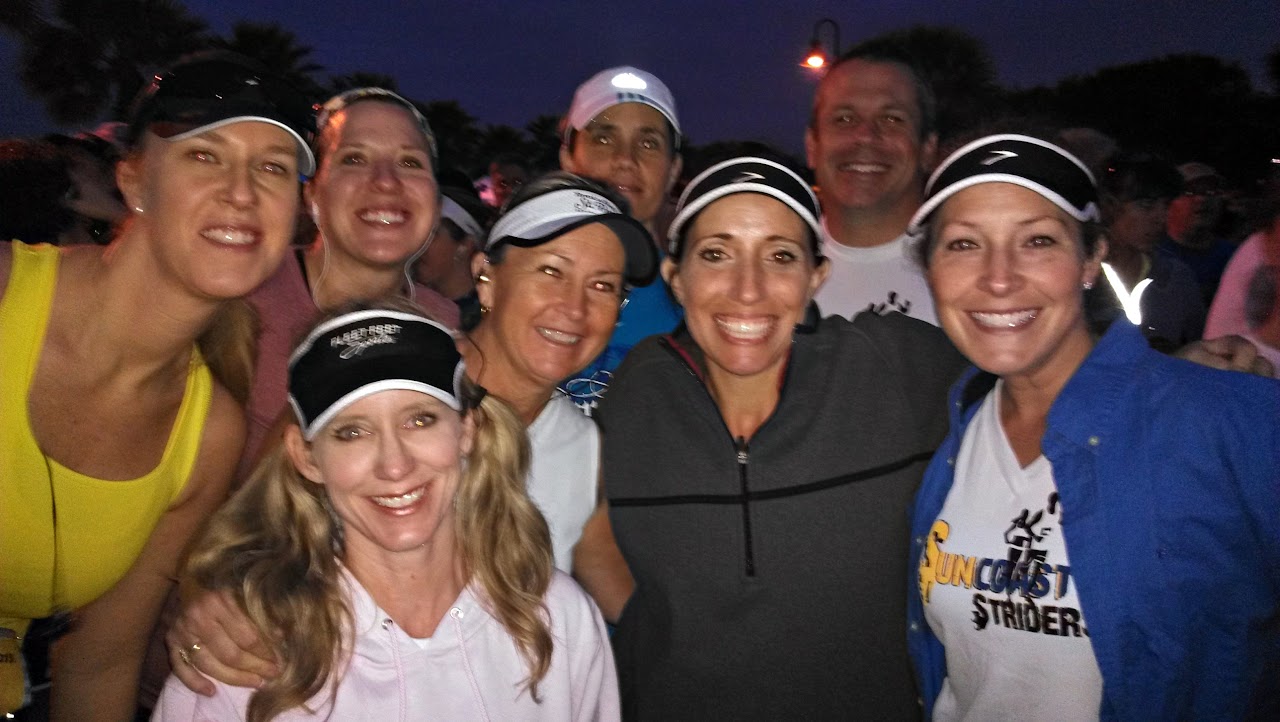 At the start, the four of us all felt pretty good and no one was sore from last week’s marathon.  We started out slow and around mile one, we began our trek across the Clearwater Causeway (the first bridge) into Clearwater Beach.  We ran slowly over the incline and considered walking down, but we all felt as though we could run, so we kept a slow 10:30 pace down the bridge. 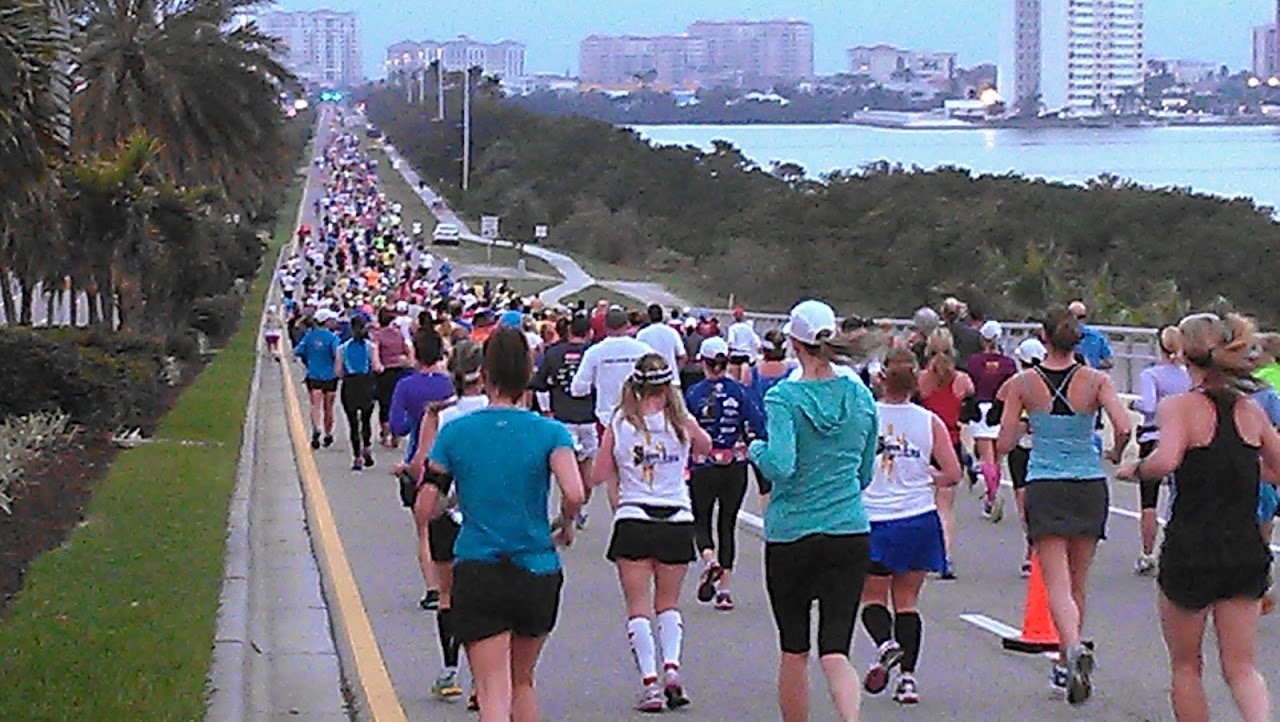 Around mile 3, we stopped for a stretching break since our legs were all nicely warmed up and then walked through the first water stop.  After a few photos and a quick restroom break, everyone felt refreshed enough to continue running through Clearwater Beach. 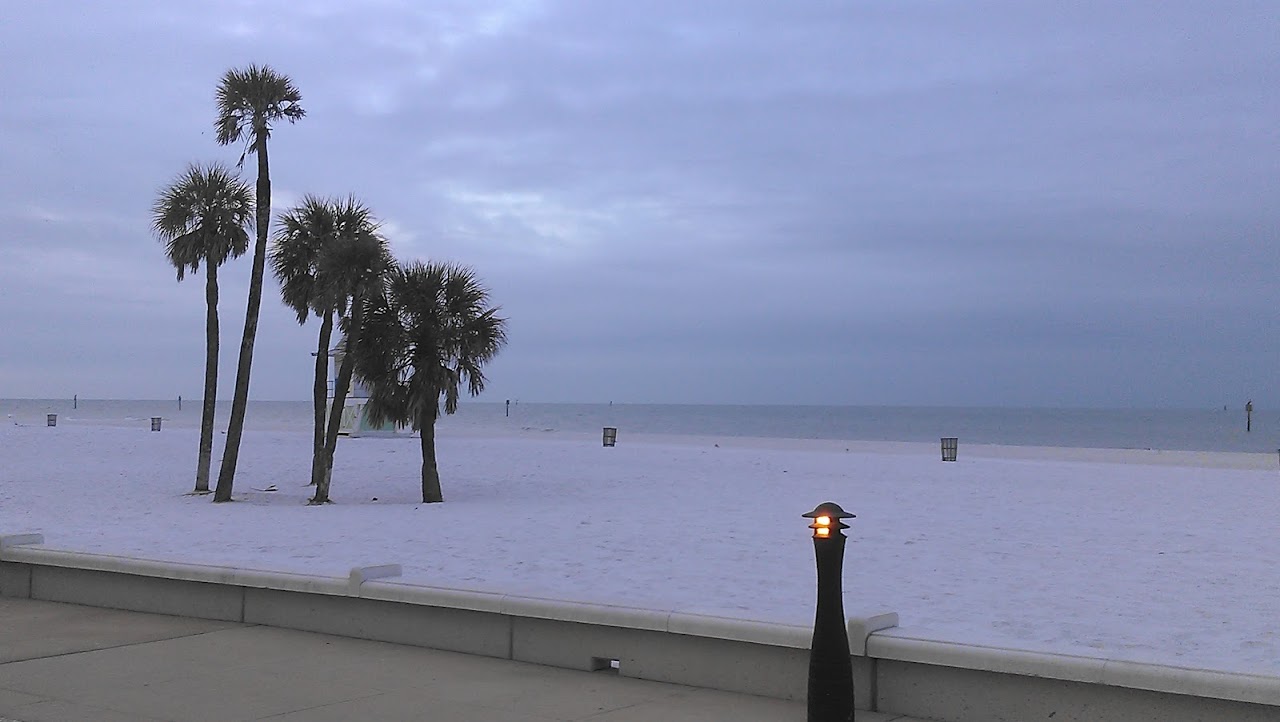 Then, we reached the Sandy Key Bridge and it was time for another forced walking break. 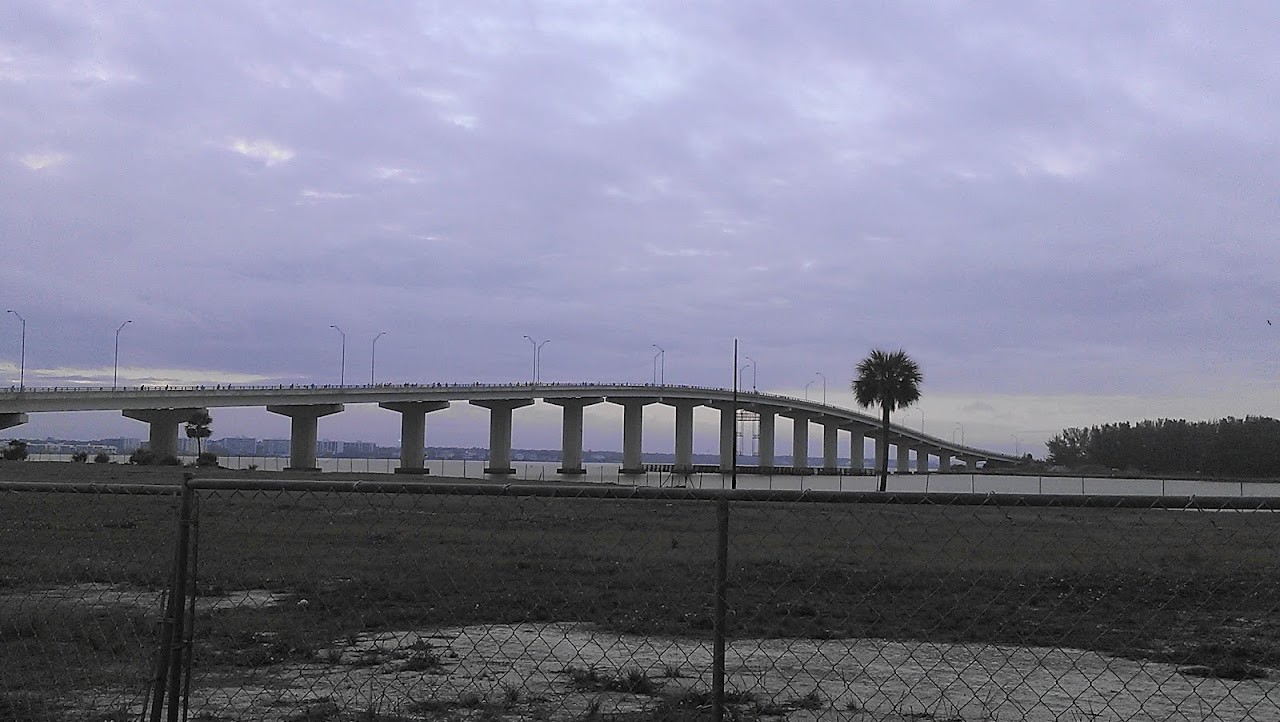 Once we reached the bottom of the bridge, we started running again, especially since we knew our Suncoast Striders family would be cheering for us outside Sand Key Park.  As we approached the 4.5 water station, Maribel and Daffodil cheered the loudest.  Obviously, we stopped for drinks, orange slices and a few photos. 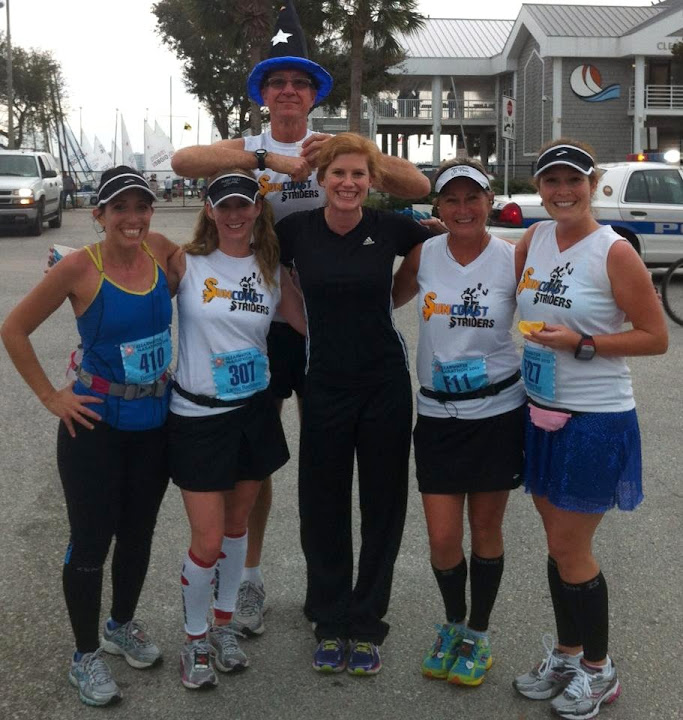 To our surprise, our friend, Carrie, ran with us through Sand Key Park.  It was so much fun to catch up with her for that quick mile through the park. 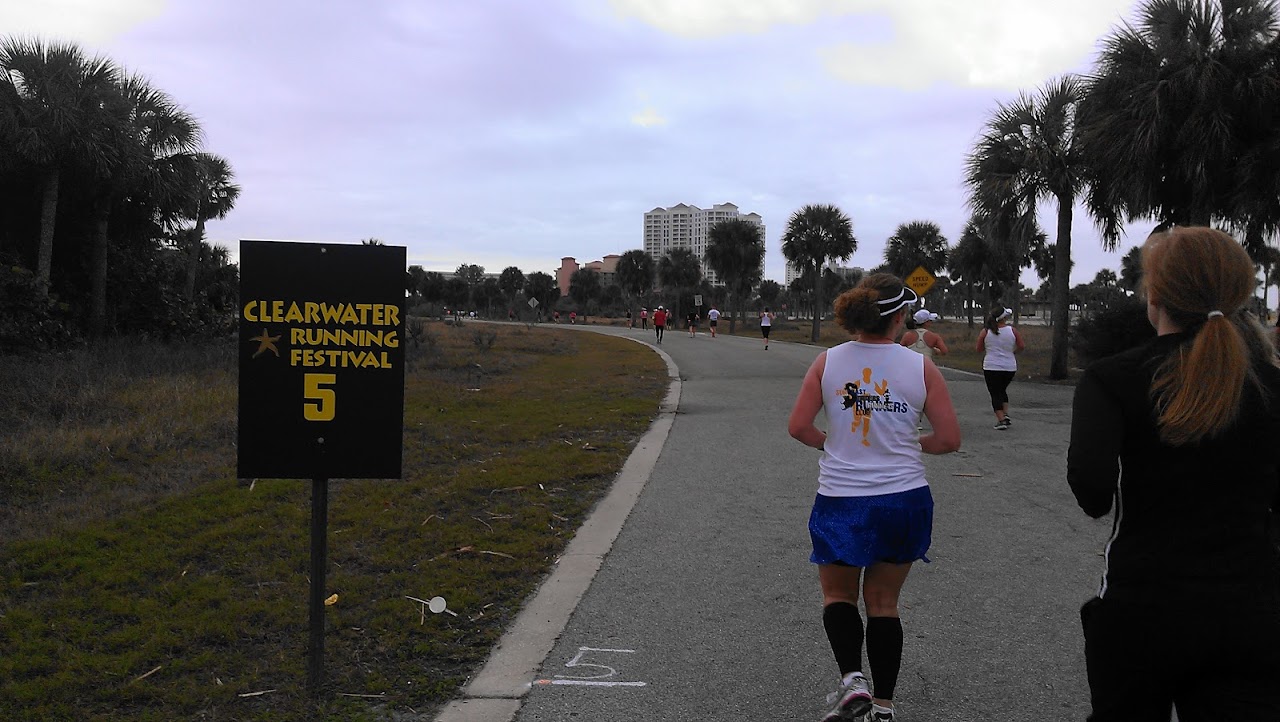 Back at the entrance, the Striders cheered and hollered for us once more.  With close to 60 people managing one water station, the Strider power and energy was invigorating.  It was just what we needed for the next nine miles along Gulf Boulevard. 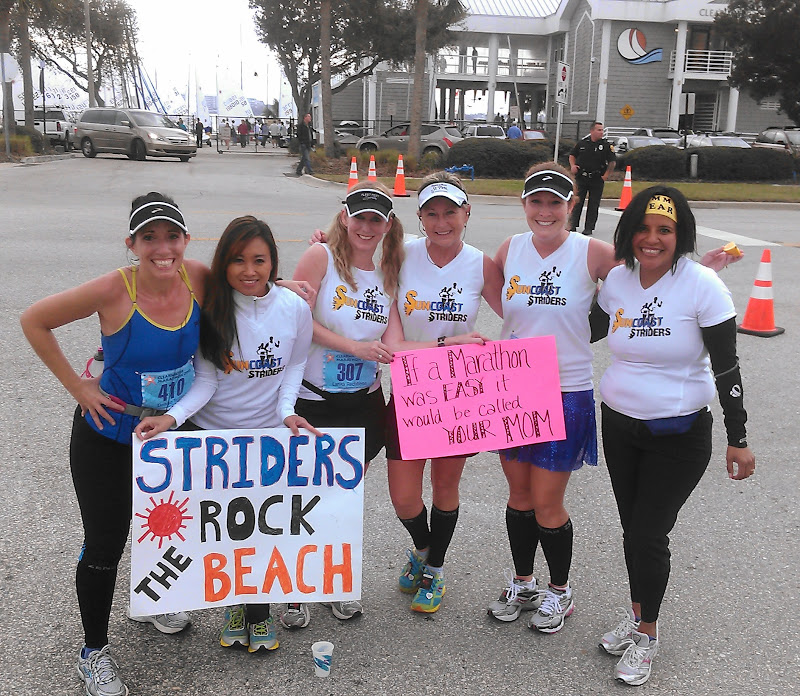 Those were the longest nine miles ever.  Apart for the water stations, we didn’t see a soul for miles.  No spectators.  No cowbells (and I gotta have more cowbell). Nothing.  Despite being surrounded by beautiful beach condos and gorgeous homes, not one beach dweller cheered for us.  It was just the four of us and thank God we had each other to get through it. 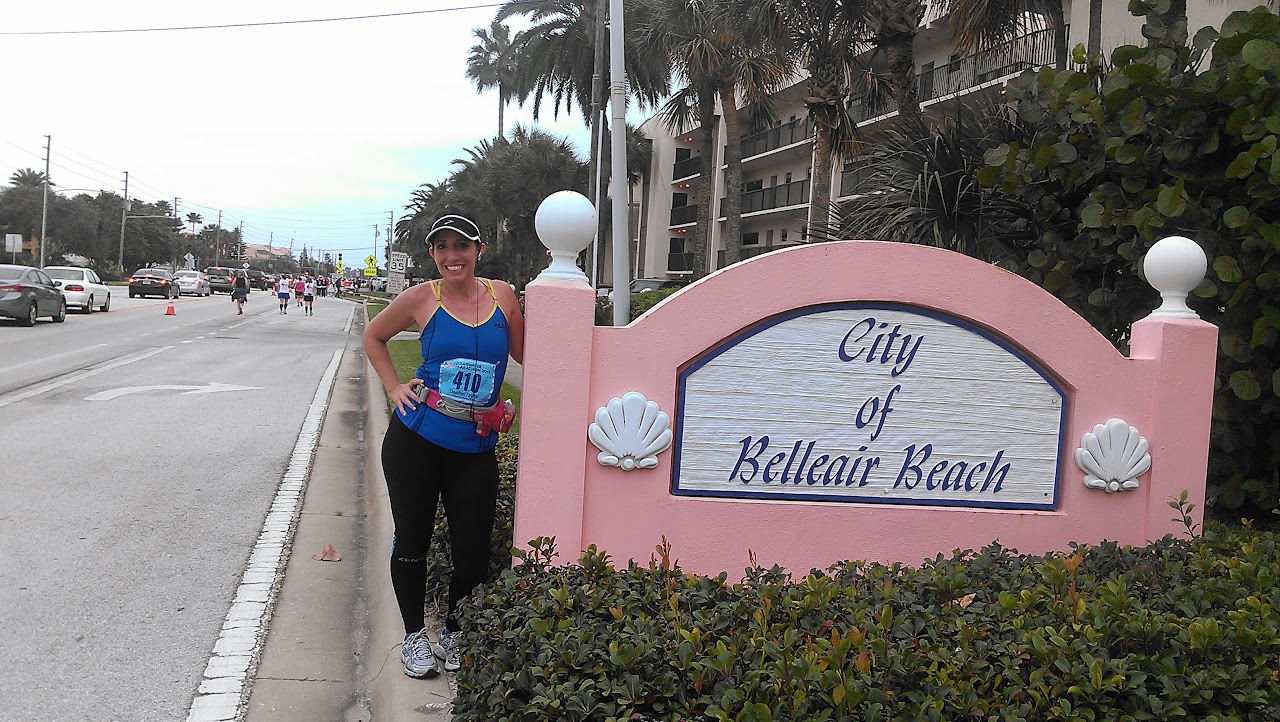 Unfortunately, this was the point that my Achilles began to ache and I started to fall behind from my friends.  I needed to stay right at 10:30 mm to avoid any pain.

At mile 10, we met the Largo United Soccer League.  Next to the Striders, this was my favorite water stop.  These girls lifted our spirits with an impromptu performance of You’re Gonna Miss Me by Lulu and the Lampshades.  I honestly wanted to hang out with them a little longer just to learn their cup rhythm.  Instead, the tune played over and over in my head for the next 16.2 miles. 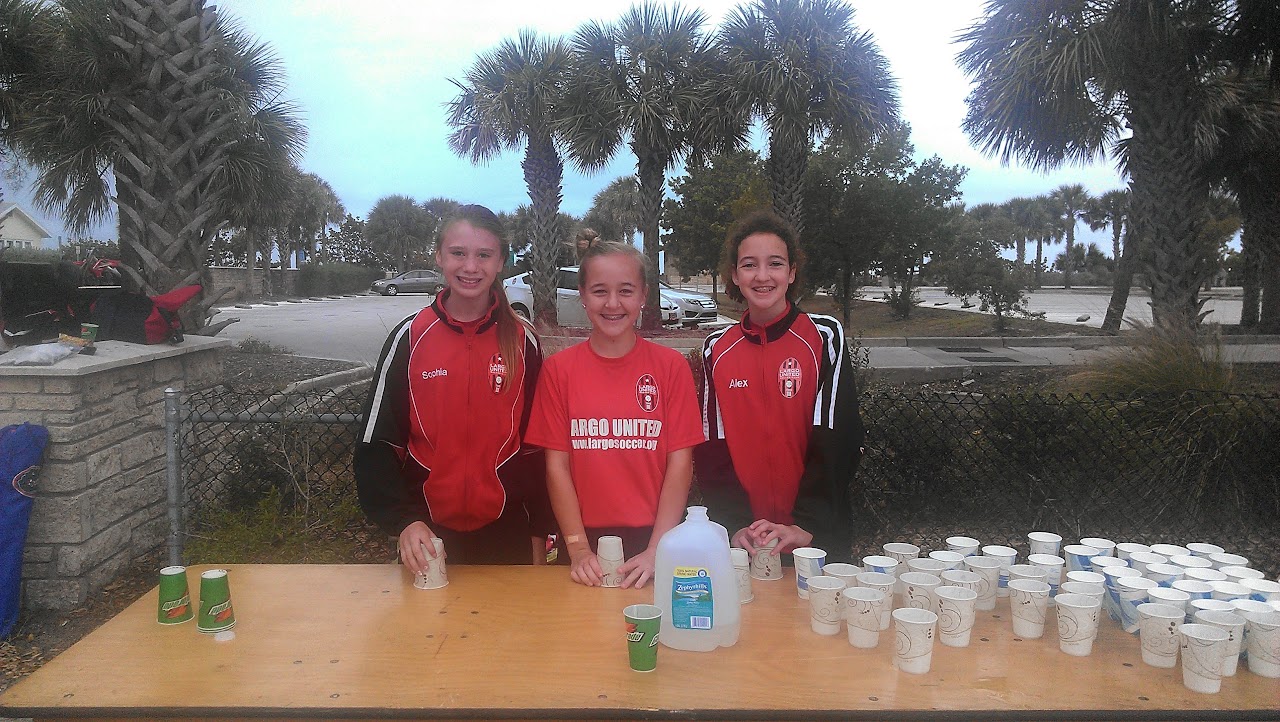 Eventually, we caught up with our Strider friends Cindy and Clark.  Cindy.was running her first marathon at 60 years young. 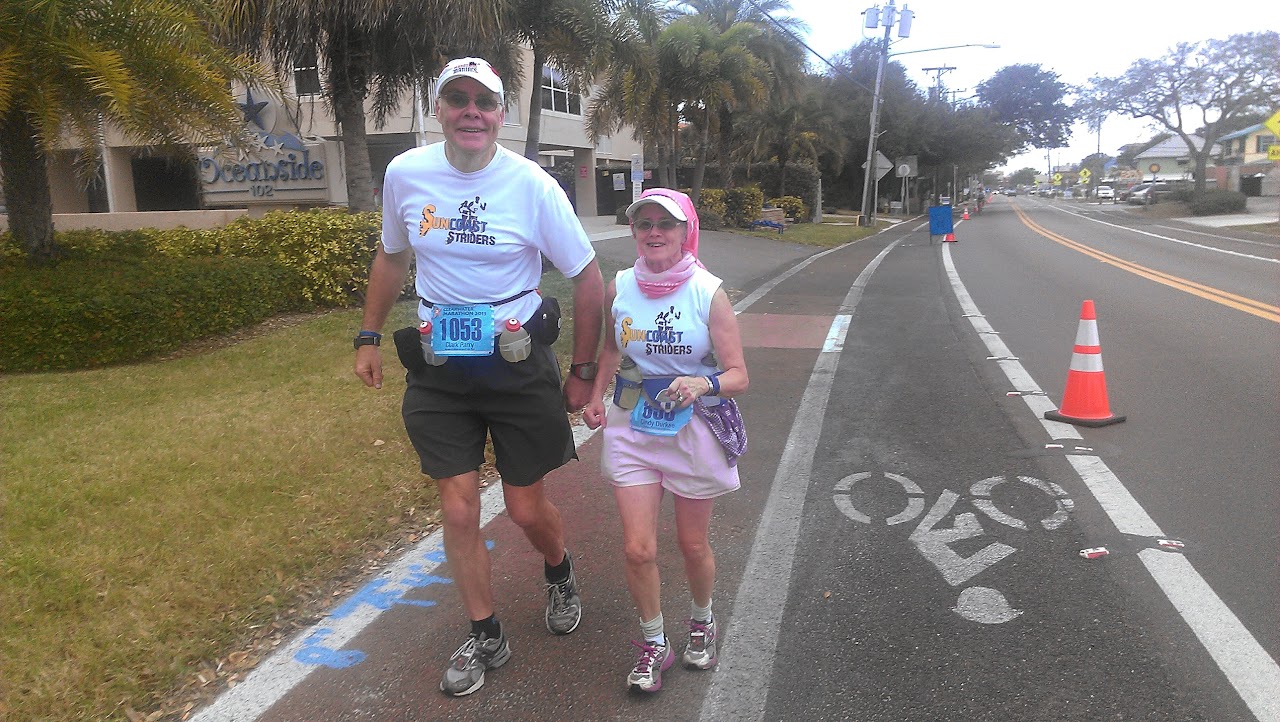 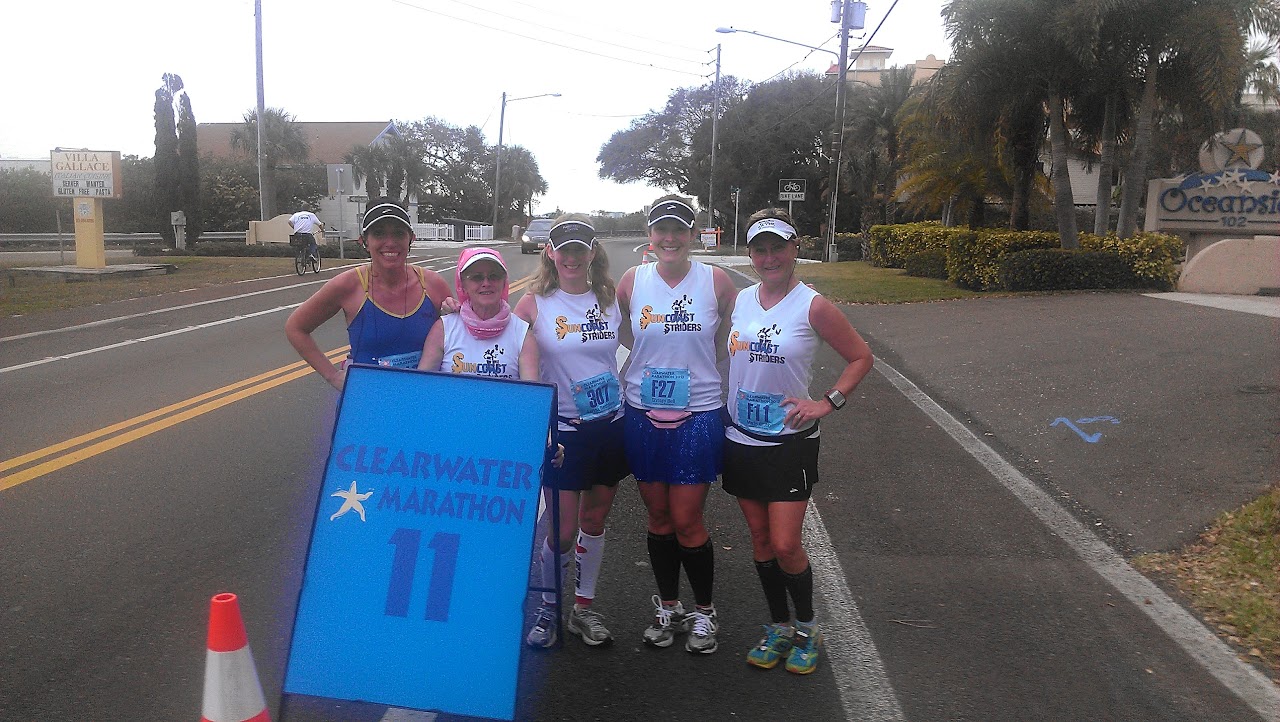 Just past the halfway point, we turned onto Park Boulevard (the third bridge) for our return journey along the Pinellas Trail.  We remembered this bridge all too well from the Holiday Halfathon.  We walked it then too.  Funny, it was gray and yucky that day too.

At mile 15, I took a quick potty break and realized my knees were beginning to hurt so I took three ibuprofen.  Larisa waited for me outside the bathroom and we ran together for a bit until we caught up with Marie and Chrissy at the base of the first Pinellas Trail overpass, which we all walked. 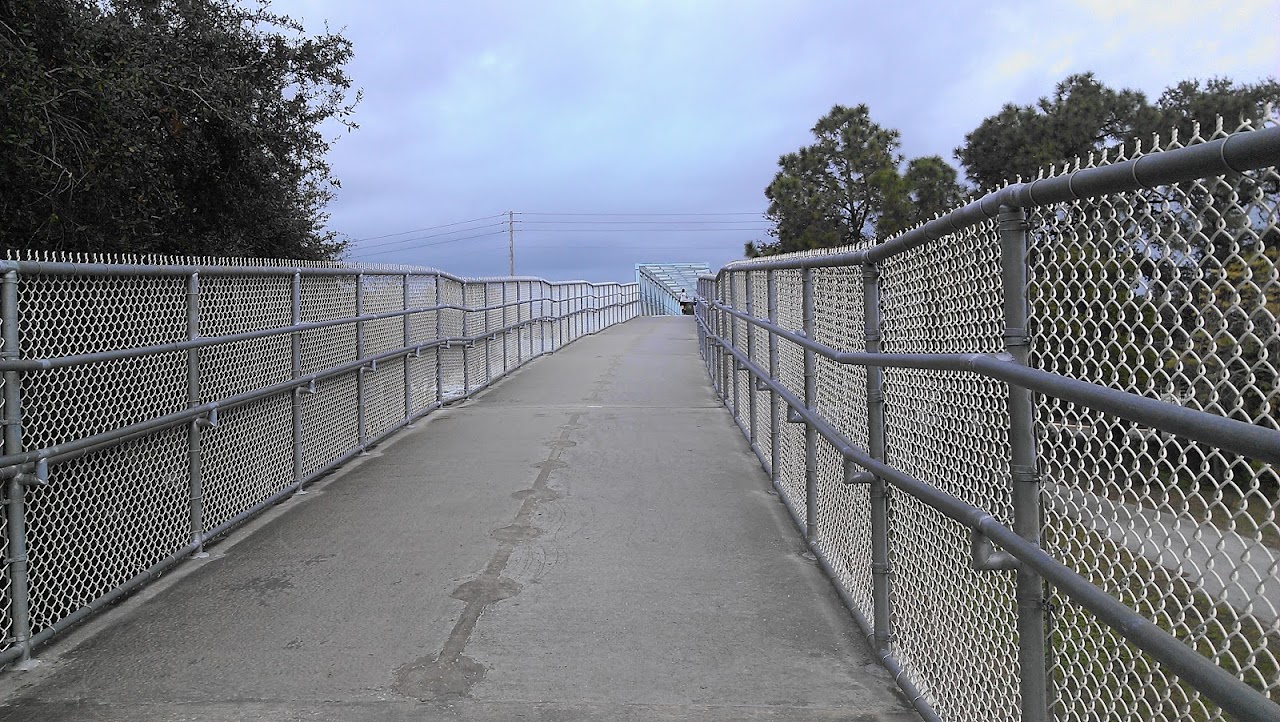 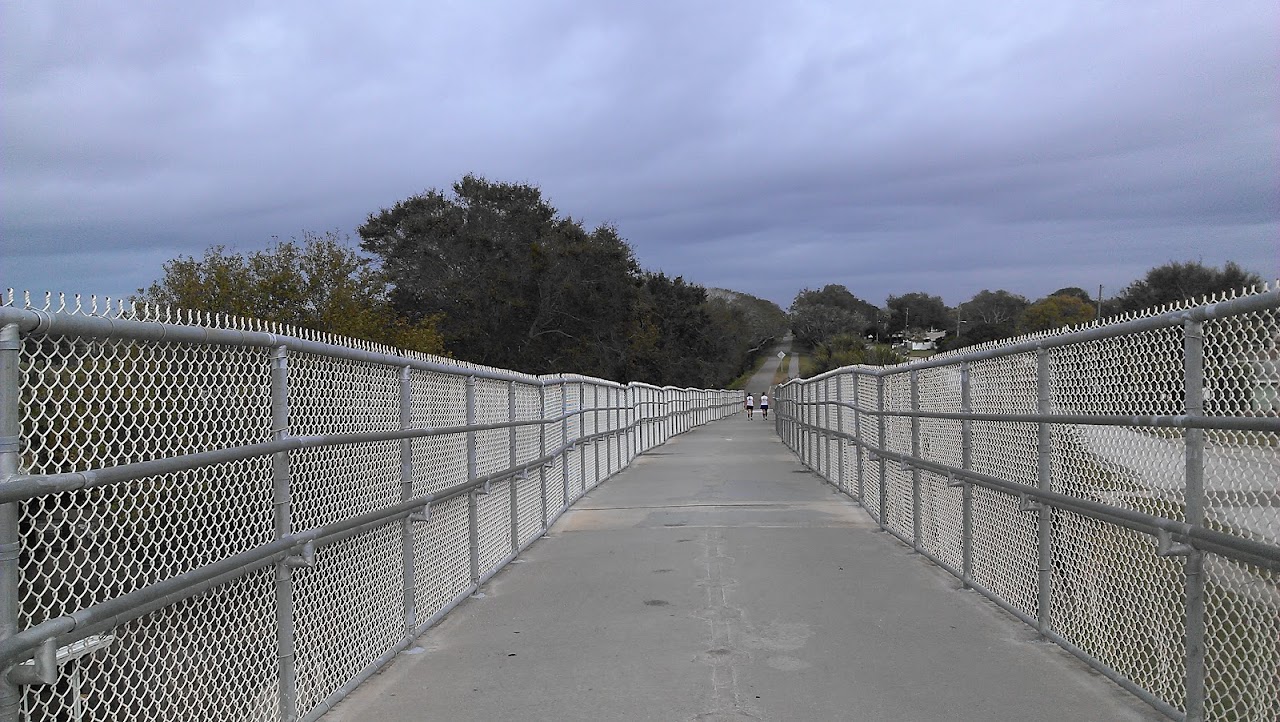 See, although there are only 3 bridges along the said “flat” course,  there also three trail overpass which as are just as difficult to run over as the previous bridges.

Mile 16 wound us through the same park we ran through for the Holiday Half.  We were rewarded for our efforts with water posing as beer. 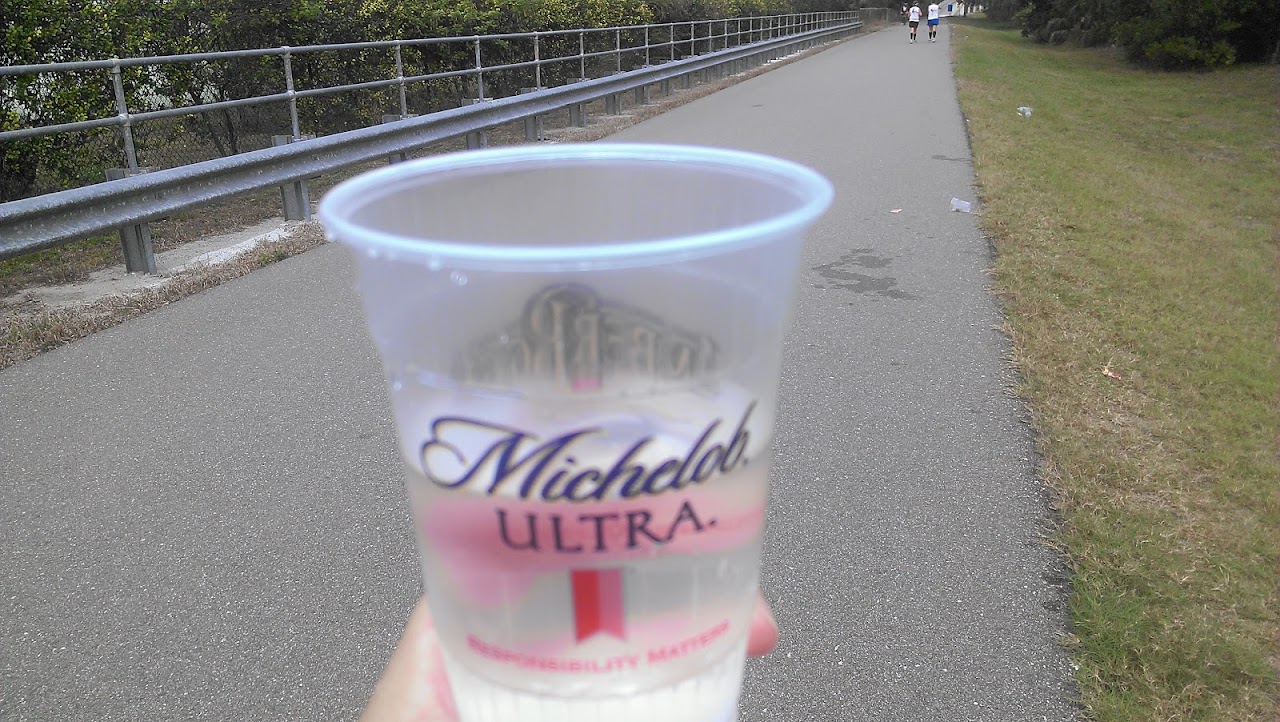 Around this point, I was really struggling with pain.  Although I expected to experience Charley horses or issues with my heels, I was feeling pain in my knees.  To avoid any further pain, I now needed to slow down my pace to around 11:00-12:00 which caused me to fall even further behind from my friends.  As long as I could see them, I was fine.

Around mile 20, I caught up to my friends at the water station just as Daffodil phoned me to get a full race report and our anticipated finish time.  “I’m in a lot of pain,” I reported.  “But we should finish in about an hour.”

To everyone’s surprise, Chrissy and Marie informed us at mile 20 that they’d like to PR.  “I can’t do it,” I reply. “But you should definitely go for it!”  With that, Chrissy, Marie and Larisa take off to PR the marathon.

For the next two miles, I was in a really ugly place in my head.  What was I thinking?!  Why am I doing this?!  We were supposed to stay together!  I hate these stupid Clearwater races and their dumb ass bridges! Why is Land O Lakes so flat?  Why am I the only in pain? 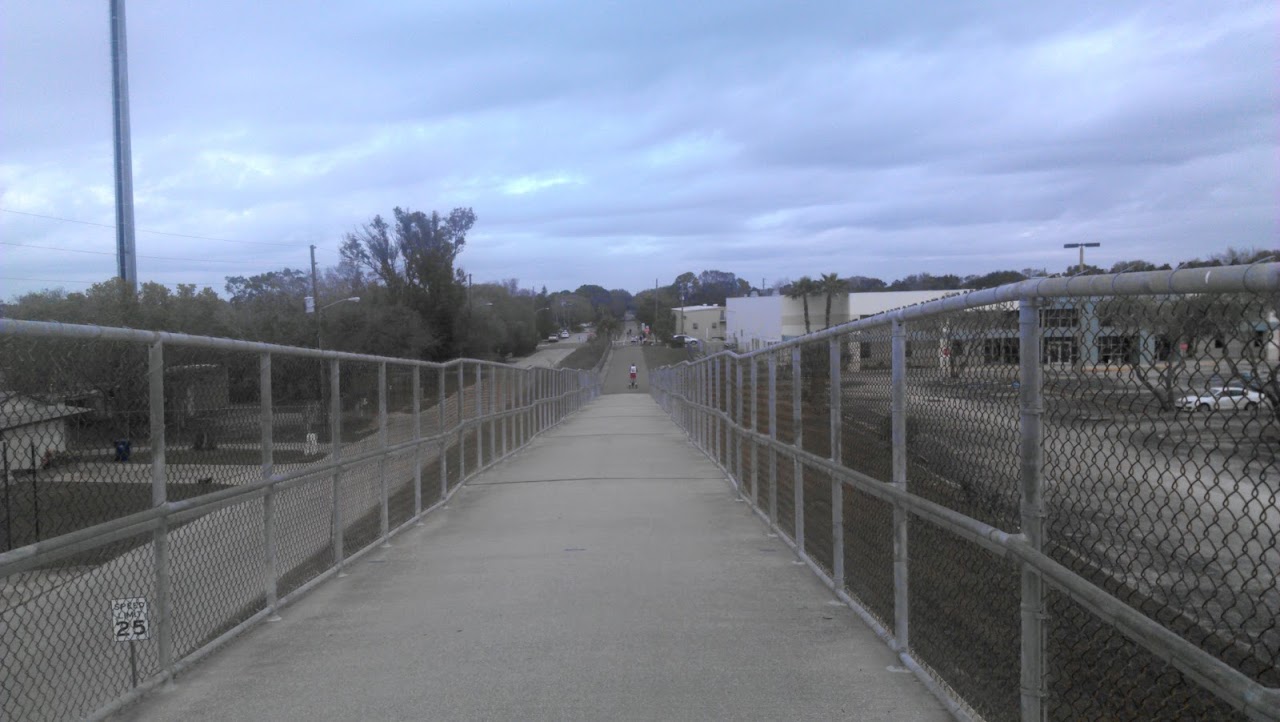 Those are some of the PG-rated thoughts that boomed through my head.  I found myself walking more than before and I cussed every overpass.  I really hated myself and my legs for hurting so much.  I hated the long stretches along the trail.   A few random cyclists passed me and I felt very alone for the next couple of miles.  If it wasn’t for the water stations and the police manning the intersections, I don’t think I would have seen anyone.  Flashbacks of Space Coast flooded my mind. 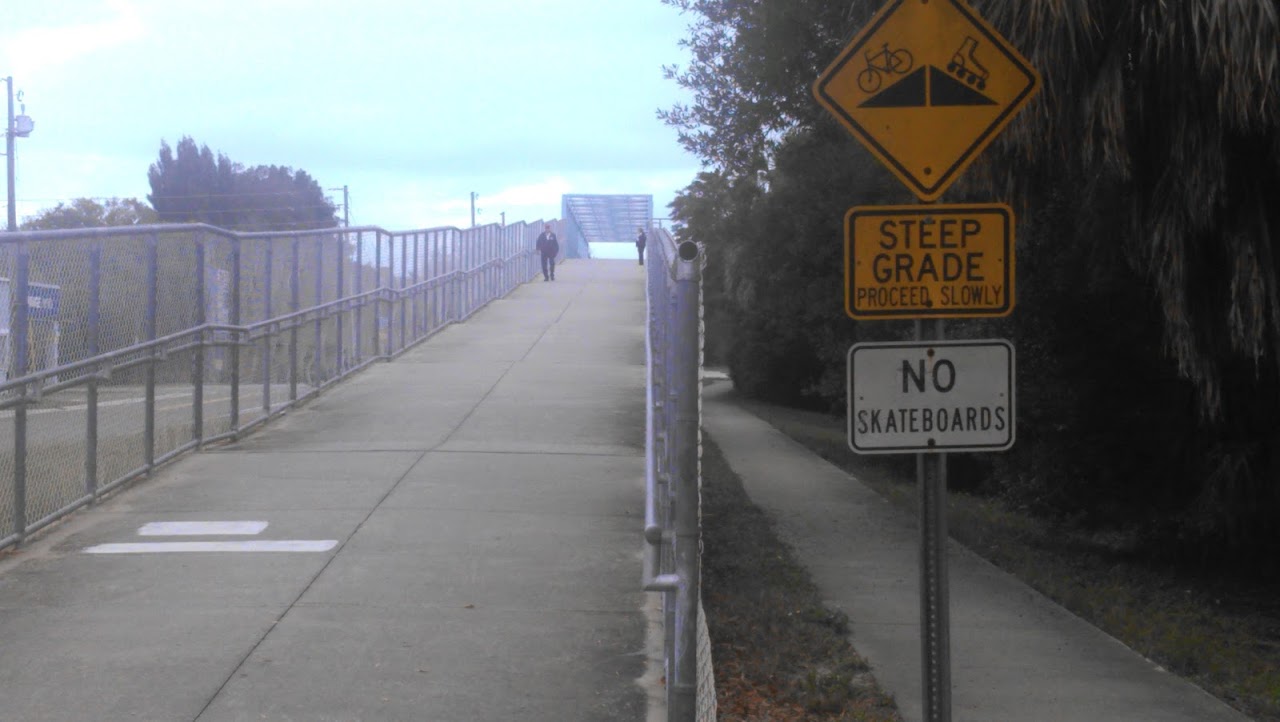 At the base of the third overpass, I reached mile 22.  I stopped for another potty break. (I was drinking a lot of Gatorade and water throughout the race.)  I took three more ibuprofen.  It was time to focus.  I needed to shake the horrible thoughts happening in my head and finish the race.  “C’mon there’s only four more miles.  That’s nothing.  You got this!”

Although I ran around an 11:00 mm, those were probably my strongest miles.  Somehow, I overcame the mental and physical hurdles and I felt great again.  Maybe it was all the ibuprofen (I’m sure my liver is failing and I need dialysis.), but for whatever reason, my whole outlook changed. I then began to catch up to other runners.

At mile 25, I wouldn’t allow myself to hit that same wall I faced at Disney.  I clicked through my MP3 player for the right tunes to help me finish the race.  “Pitbull, take me home!” I hollered.  “Don’t stop the paaaarrrty!”

The next mile led us through a gorgeous residential neighborhood.  Thank goodness for the orange cones which I followed like breadcrumbs, because I’m sure I would have been lost with all the turns.

The last 0.25 mile of the race was the most ridiculous.  As much as I wanted to be finished, I stopped to take a photo of this part of the course: a spiral pedestrian path leading back to Coachman Park.  I thought my ankles would snap. 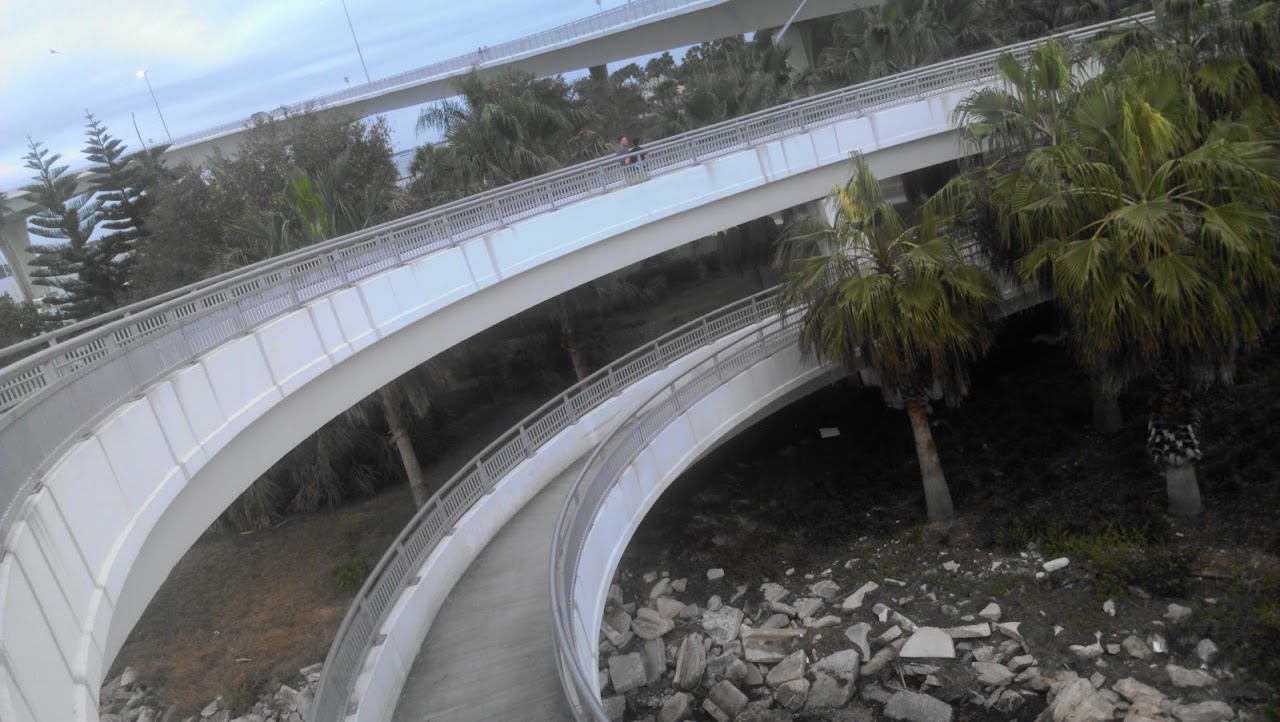 At the bottom of the spiral path, I was so disoriented and confused.  I didn’t know which way to go.  Once again, the orange cones showed me the way. 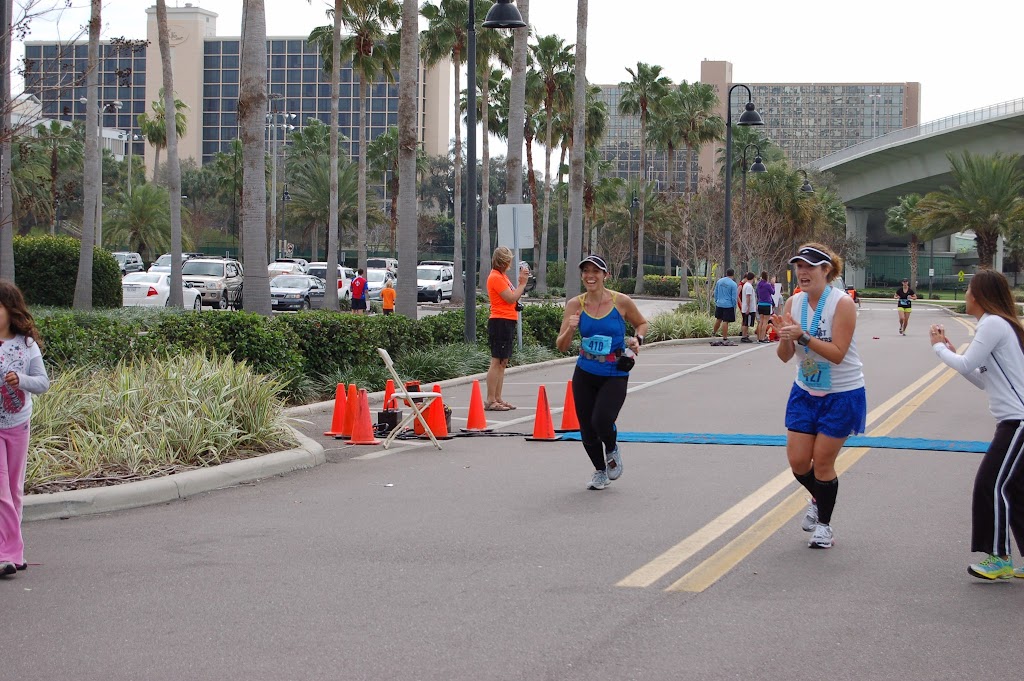 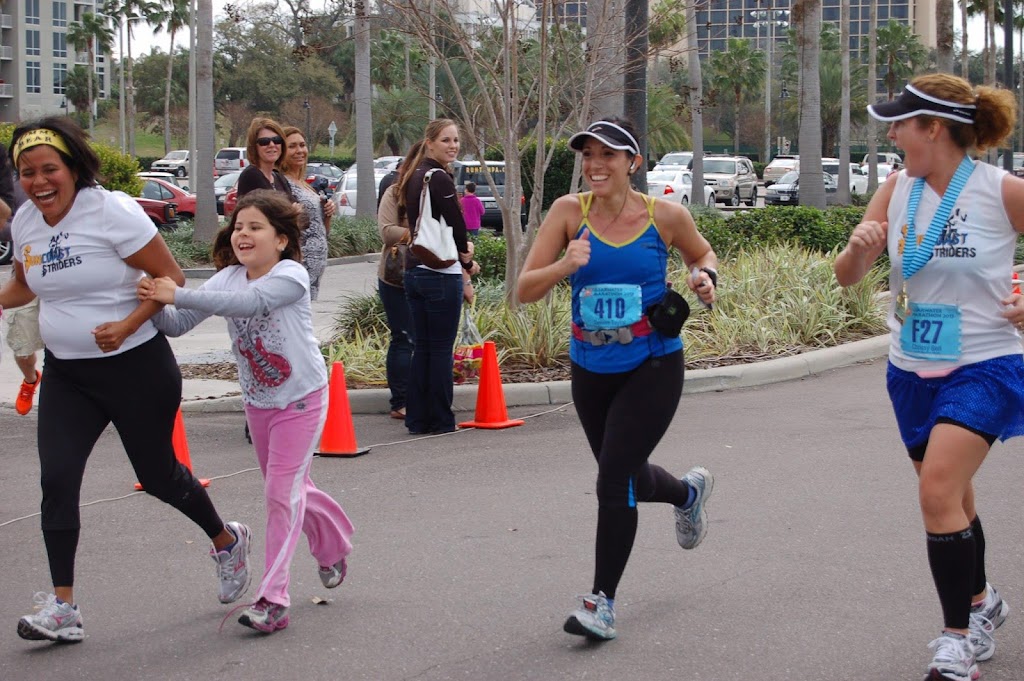 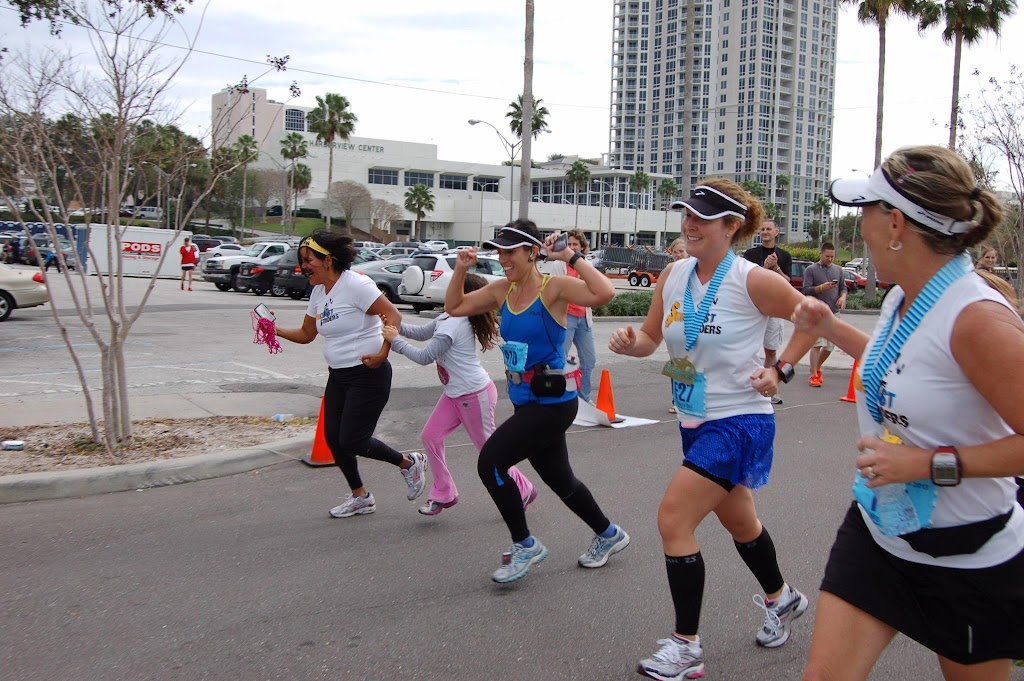 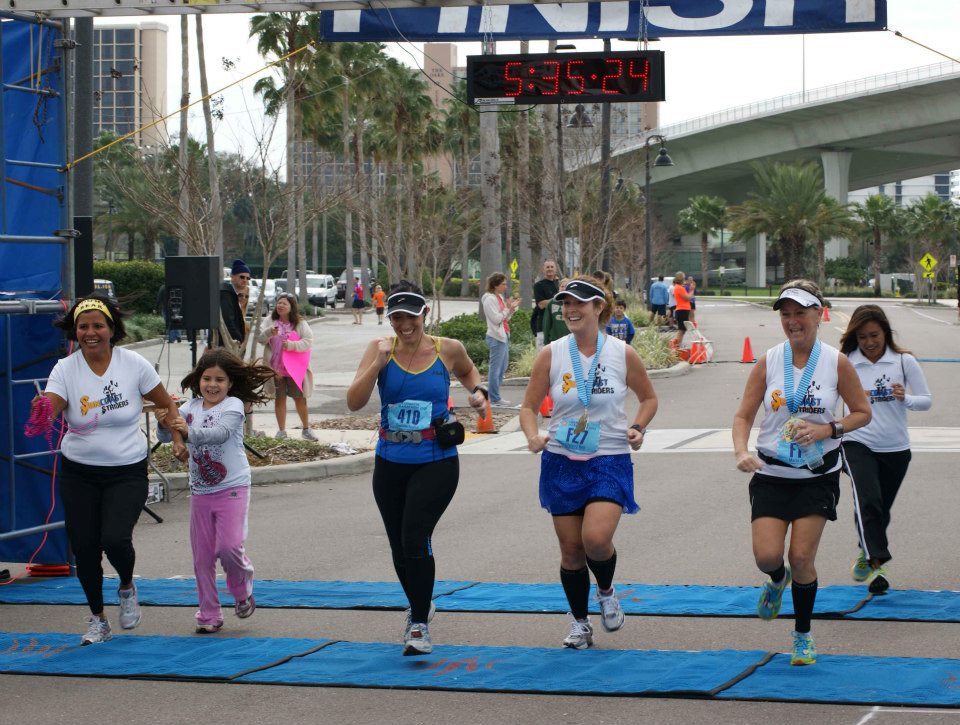 Of course, I cried. 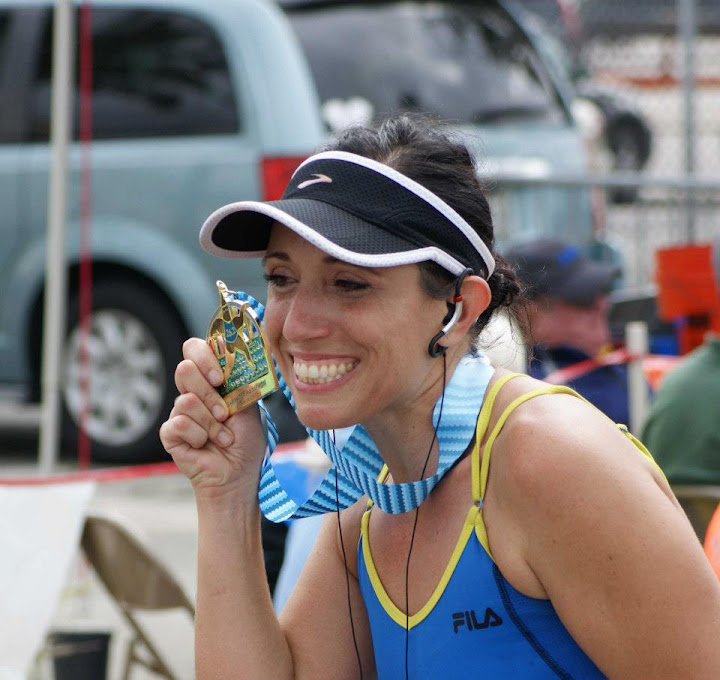 We did it. These determined Marathon Mamas earned a spot in the Marathon Maniacs without crawling across the finish line and lived to tell about it. 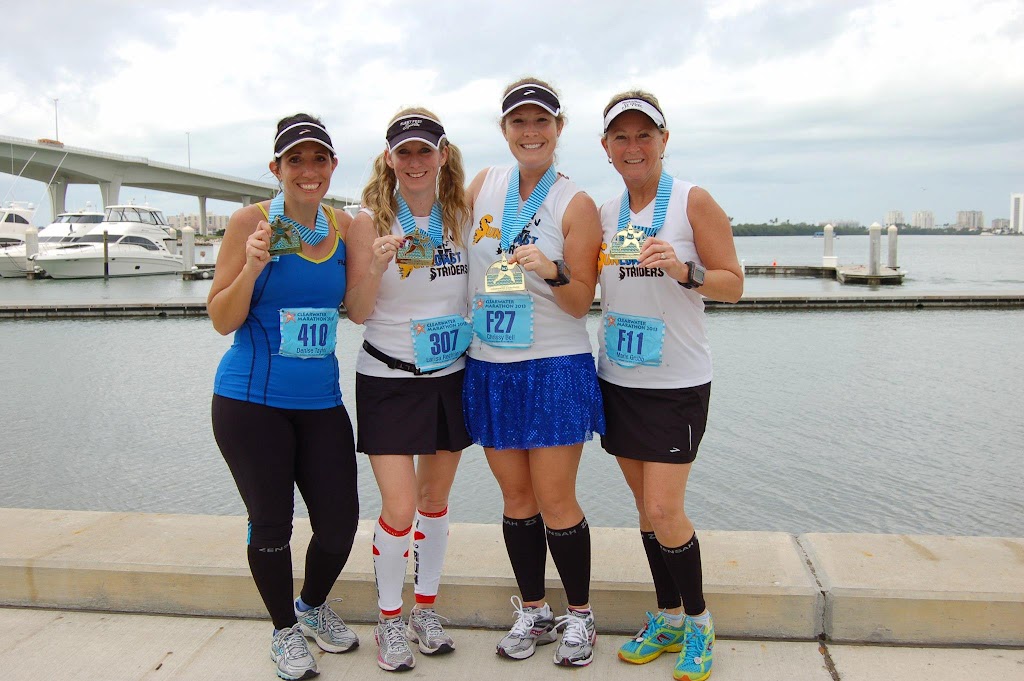 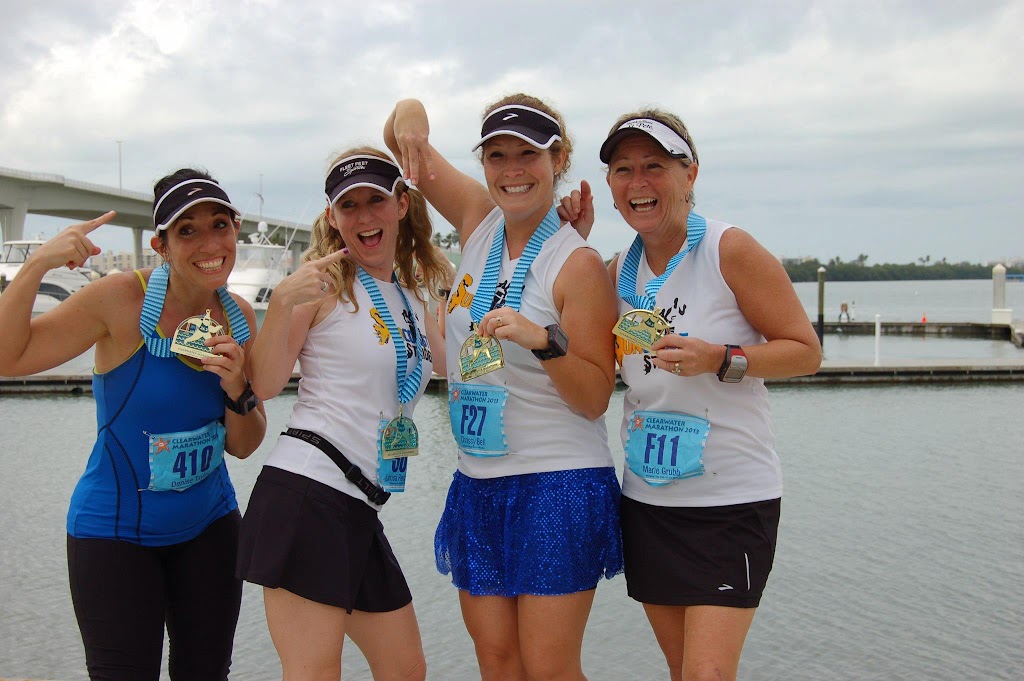 As for Chrissy and Marie, they beat their Disney time by nine minutes.  First-time marathoner, Cindy, finished strong too and we were all there to cheer for her. 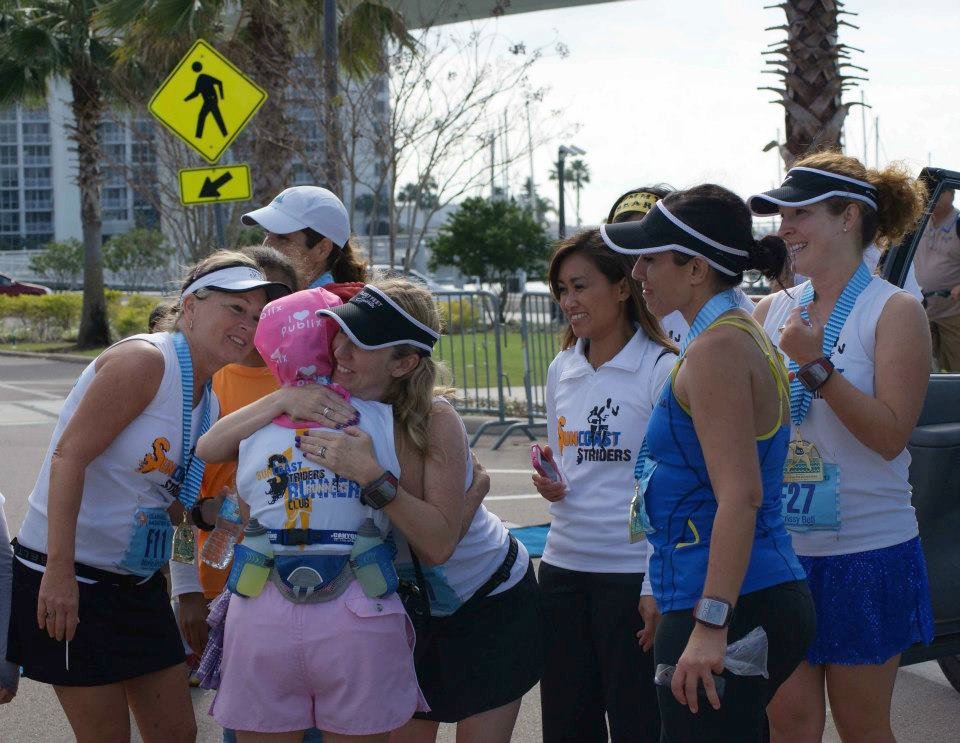 At the post-race party in the park, we celebrated two marathons in one week and still walking with ice cold beer (not water posing as beer). 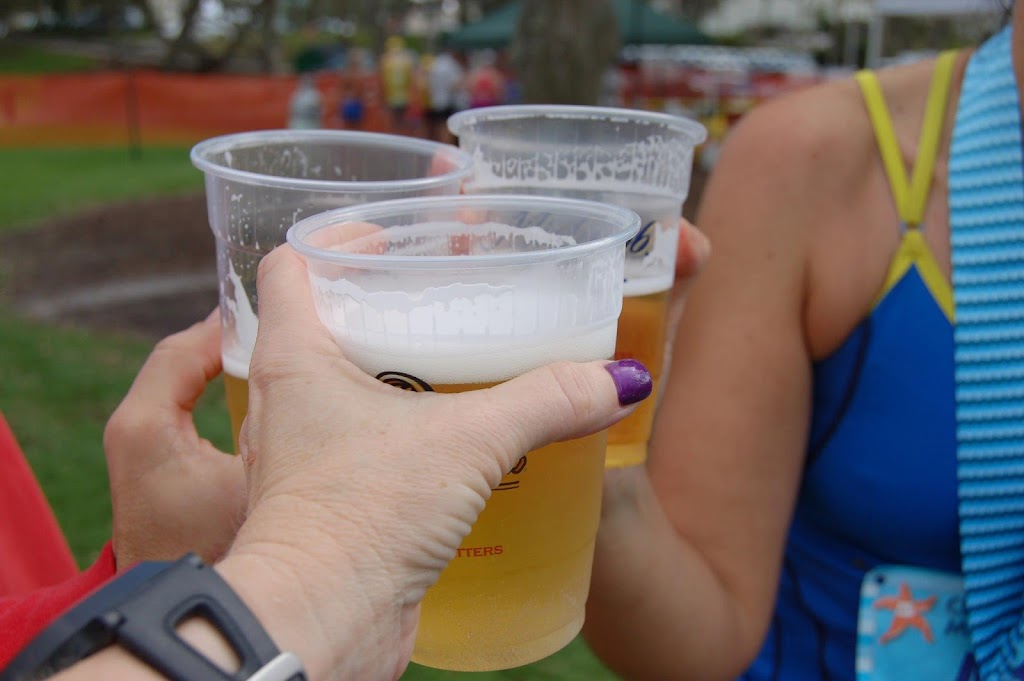 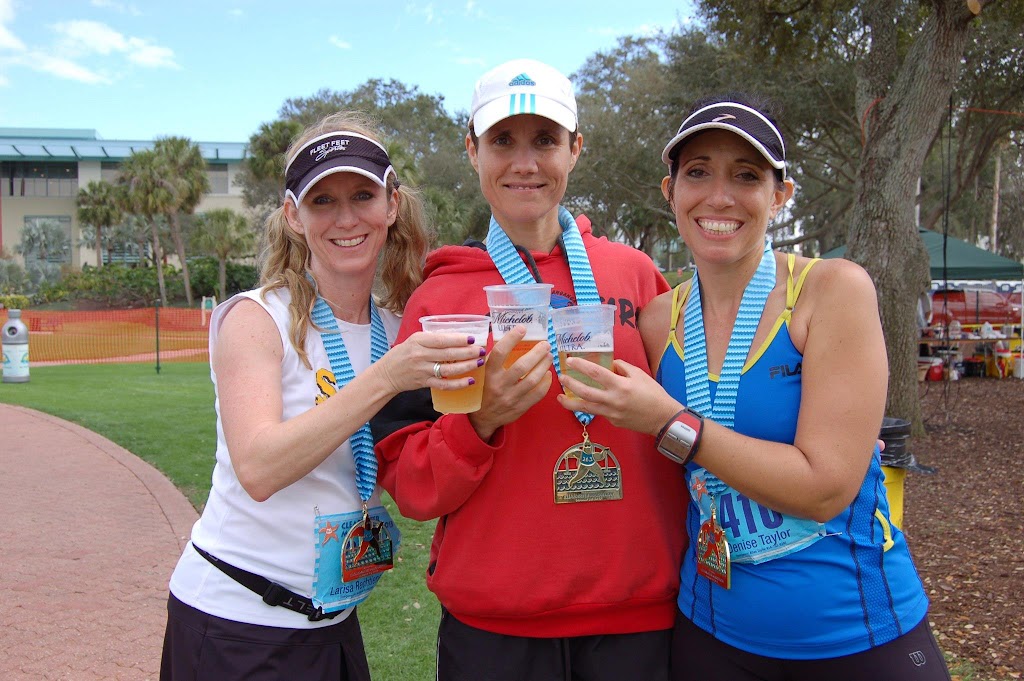 *Big THANK YOU to my friends, David, Aaron and Larisa, for sharing their wonderful photos with me!*