Since the tale as old as time twirled across the big screen in the 90s, Beauty and the Beast has always my favorite princess tale. Bookworm Belle with a balance of beauty and brains broke the traditional Disney Princess stereotype. She wasn’t a mere servant girl pining for a princess to rescue her. Belle was the protagonist who saved a prince.

As a young college woman in the 90s, I shared Belle’s love of books and thirst for adventure in the great wide somewhere. Though society and Gaston wanted Belle to fulfill some archaic (or primeval as she calls it) womanly duties of becoming a man’s bride to squeeze out babies, she knew she deserved more and longed for it.

I dressed as Belle for Disney’s Princess Half Marathon

I empathized with this modern provincial princess. Fast forward to my mom years in a post-Beauty and the Beast world where Mulan, Merida, Tiana, Elsa and Anna have entered the scene producing a generation of strong, independent, we-save-ourselves-and-the-world princesses. While those princesses are all equally strong, beautiful and fantastic role models for girls, Belle will always top my list because she was the princess that broke the mold.

So when the Straz Center invited me to attend opening night of Disney’s Beauty and the Beast, I was thrilled to share the evening with my own two strong, beautiful, brilliant independent princesses. Although Belle may not top their list of ultimate Disney Princess tales, they know how much I love Belle and were happy to share the experience with me as a early Mother’s Day gift. 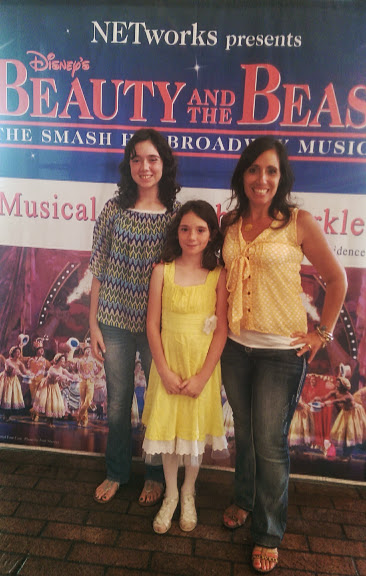 Yellow is the new black. It’s all the rage this season.

Tuesday night was my second time seeing the stage adaptation of this beloved animated film and it was interesting to see how the production has evolved over the years. Over a decade ago, I vaguely remembered Lumiere having true flames from his candlestick hands instead of the flickering orange LED lights. Another change, puppets now play the part of the vicious wolves in the woods as well as Chip, a chatty teacup on a serving tray and the old hag who transforms into the sorceress and places the spell on the prince. With the addition of some new dance numbers, I thoroughly enjoyed the Gaston choreography combining dancing with tapping steins. 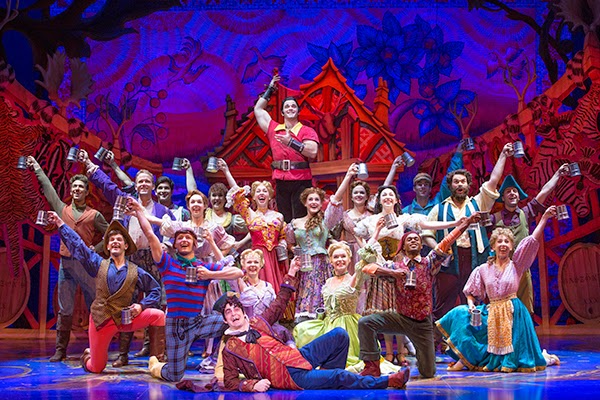 Given some of the Straz Center’s most recent extravagant touring companies such as Cinderella, Phantom or Pippin, Disney’s Beauty and the Beast scenes are modest in comparison, but successfully serve the purpose of representing living storybook illustrations. Throughout the performance, the entire cast helps change the sets and move the scenes. Shadowed gargoyles hide under many of the apparatuses such as the golden staircases waiting for their cues to turn sets and move scenes into place. 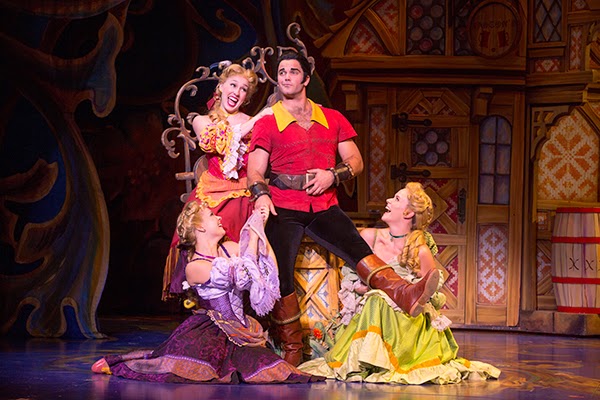 Gaston (Cameron Bond) is the villain audiences love to hate but secretly adore with every flex and bicep curl. Bond’s beautiful tone, incredibly muscular physique and charm wooed the entire theater along with the Three Silly Girls. 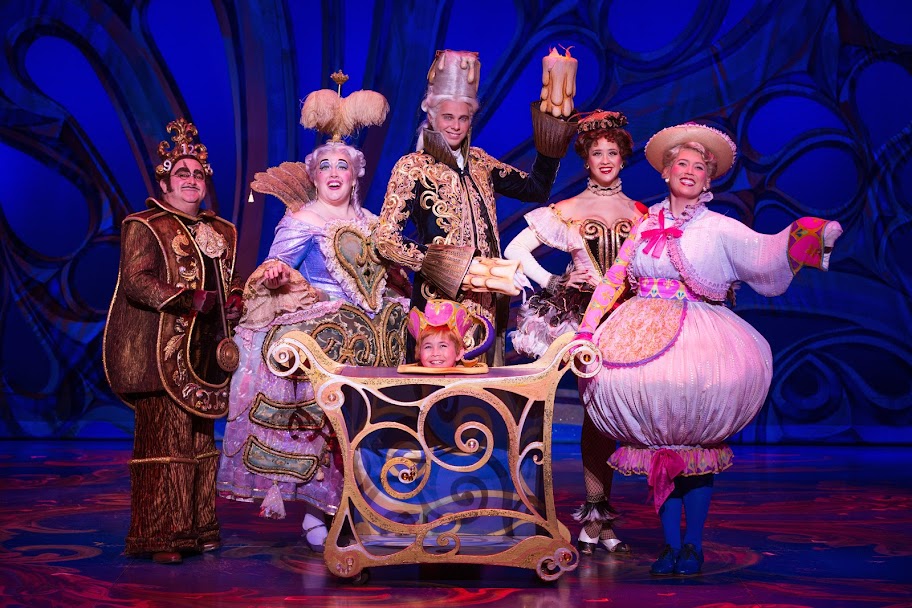 Lumiere (Patrick Pevehouse) lit up the house with his own serving of style and charm. With his slow, swanky lead into “Be Our Guest”, Pevehouse shimmied his hips as a tip of a hat to Allan Cumming’s rendition of Cabaret, a tasty little treat for theater-lovers. 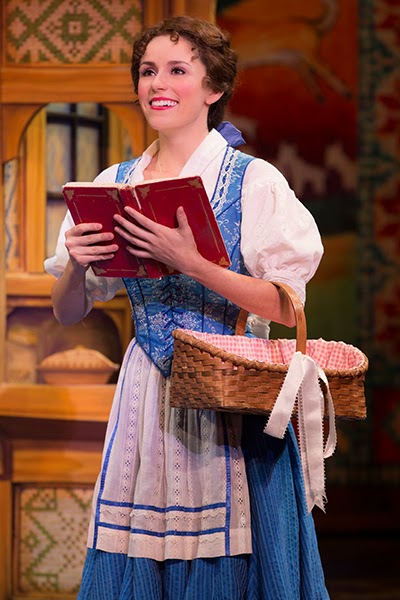 Belle (Jullian Butterfield) captures our heart immediately in the opening scene. Her tone is absolutely perfect and embodies the true spirt of Belle. Beast (Ryan Everett Wood), on the hand, delivers a more comedic Beast which may delight or annoy Disney fans. His high pitch shrills will stun and surprise the Beauty and Beast purists, such as myself. 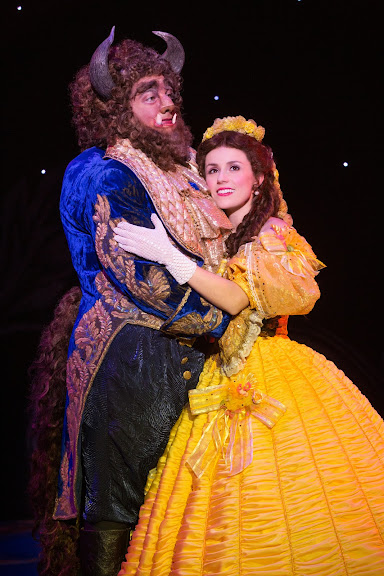 With much anticipation, the entire theater waits with bated breath for the famous ballroom scene where Mrs. Potts (Emily Jewell) serenades the love birds, but poor Mrs. Potts is sadly overshadowed by Beast’s untimely comedy and the love story that unfolds before us center stage. 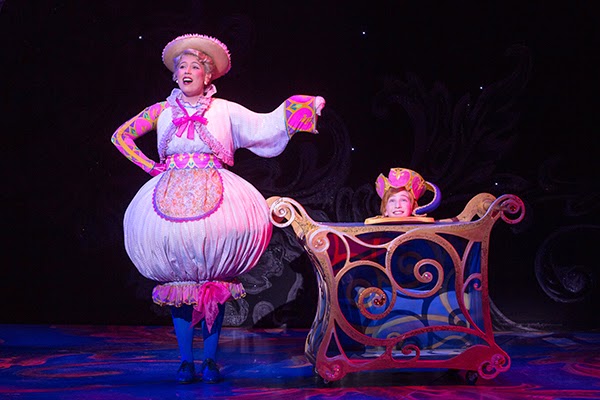 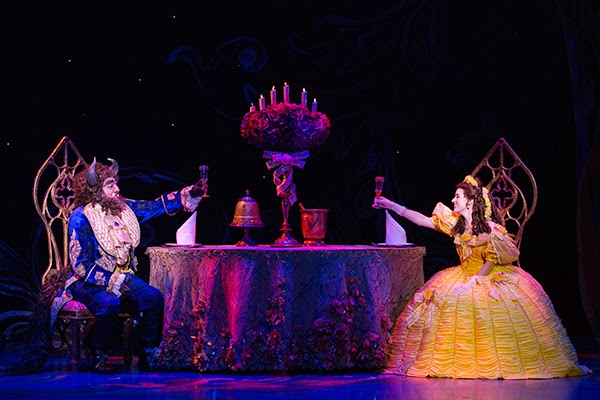 The stage production brings the beloved Disney tale to life with the addition of a few songs not featured in the original film (including Home, How Long Must This Go On?, If I Can’t Love Her, Human Again and A Change in Me) and follows a similar plot. However, my two princesses were disappointed with the mob scene. Unlike the awkward comedic timing of the Beast, slapstick and silliness will always work when angry villagers storm an enchanted castle. Beauty and the Beast fans expect clever wardrobe changes inflicted on unsuspecting victims by wardrobes, dousing them with powder wigs and women’s undergarments.

My girls also thought that the fight scene between Beast and Gaston appeared anti-climactic. Perhaps in an over dramatized, action-packed movie world, young audiences expect more melodrama. Conversely, the final scene where Belle professes her love for Beast delivers all the magic and wonder Disney audiences desire.

No matter where you fall on the melodrama range, from beginning to end Disney’s Beauty and the Beast offers exactly what you would you expect from a Disney production. An enchanting family-friendly love story that will always stand the test of time.

Witness the enchantment of Disney’s Beauty and the Beast at the Straz Center now until May 10th with nightly performances at 7:30 and matinees performances on Saturday and Sunday at 2:00 pm. Visit www.strazcenter.org to purchase tickets.

Disclosure: I received tickets to Disney’s Beauty and the Beast through a Tampa Bay Bloggers and Straz Center partnership in exchange for my honest review. All opinions are my own.