Disclaimer: I received tickets to Disney’s Frozen through a partnership with the Tampa Bay Bloggers and the Straz Center for the purpose of this review. All the opinions and Frozen feels shared are my own.

When it comes to Disney Theatrical Productions, I hold all shows to “The Lion King” standard. With the combination of the animal puppetry promenading down the theater aisles as the entire cast ascends onto Pride Rock, the incredible costume design and the magnificent choreography, The Lion King is a tough act to follow.

After all, The Lion King has won SIX Tony awards, including “Best Musical”.

Therefore, when I attend any Disney Theatrical Production, I am often underwhelmed because nothing ever compares to The Lion King. As much as I absolutely love Disney’s Beauty and the Beast, even that couldn’t hold a flame to The Lion King. Sorry, Lumièrie.

With The Lion King as my standard, Disney’s The Little Mermaid could barely stay afloat. Aladdin tried its best to deliver the magic, however, by omitting Abu, a crucial beloved character, Aladdin could not soar to the The Lion King level of theater majesty.

Don’t get me wrong. I always enjoy Disney Theatrical Productions. As entertaining as these shows are, they are no Lion King.

But, that was BEFORE Disney’s Frozen.

Disney Theatrical Productions delivered the magic with the stage adaption of its beloved animated film, Frozen. For me, Frozen ascends to the regal level of The Lion King.

Disney’s Frozen beautifully captures all the magic of the Oscar winning animated film. With the help of some fantastic special effects and ingenious lighting, Elsa’s magic comes to life right before your eyes.

The show opens in Arendelle where we meet young Anna (Victoria Hope Chan) and Elsa (Natalie Grace Chan) played by two real life sisters and the audience instantly falls in love with the two. Perhaps, only real life sisters could pull off the banter and comical charm that make these two Disney princesses so appealing and adorable.

In “Let the Sun Shine On”, a maypole towers over the stage as the chorus line festoons ribbons. As the dancers weave in and out, they demonstrate that Frozen will unfold a Disney production unlike any other.

At first, young Elsa’s magic appears simple and tame represented by glittery confetti. As her powers grow stronger, so do the special effects with ice resembling lightning charging across the stage. Elsa’s fateful blow that strikes Anna caused the audience to collectively gasp. It was that epic.

For a show that builds so quickly in the first few numbers, obviously this production continues to captivate as the show goes on.

Spoiler alert! Bring tissues and a lot of them. Even though Frozen fans know Elsa hides away from Anna and Arendelle to conceal her magic followed shortly by the death Queen Iduna and King Agnarr, you will not be prepared for the pain of loss played out before your eyes. 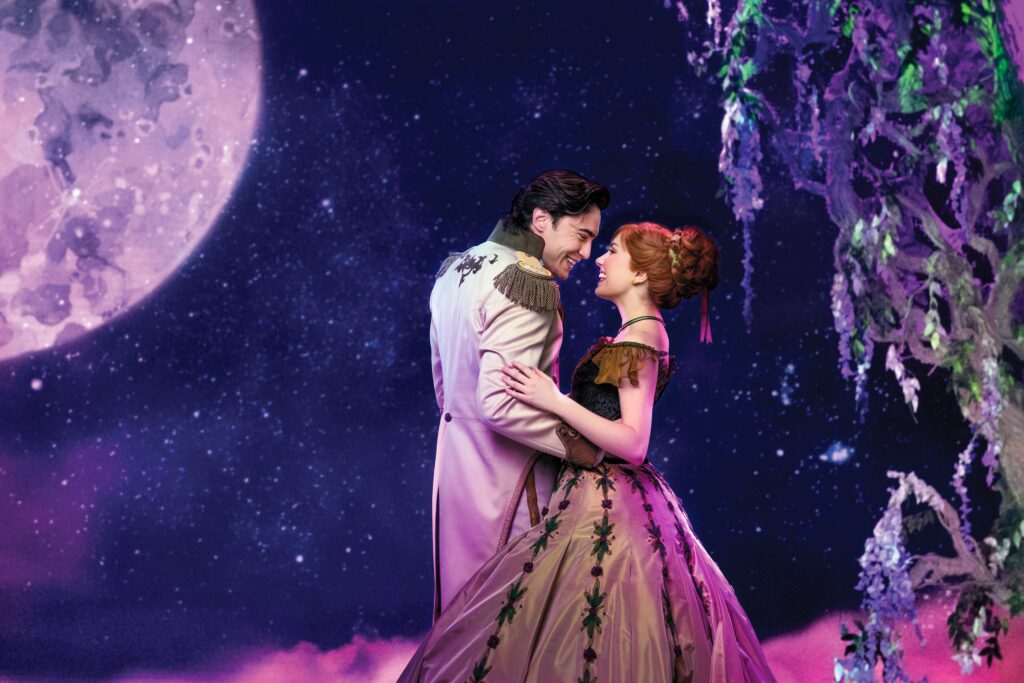 For the Frozen fans, there are a lot of fun little nuggets and Easter eggs that will delight you. Kristoff and Sven make a brief appearance during Coronation Day. New songs added for the stage adaptation bring a little unexpected “Hygge”” and choreography that will tickle you.

One small change that may disappoint the Frozen purists are the Rock Trolls. These characters have been replaced with “Hidden Folk” representing Scandinavian folklore and perform “Fixer Upper”. For me, it works. I’ll take Sven and Olaf over Rock Trolls. 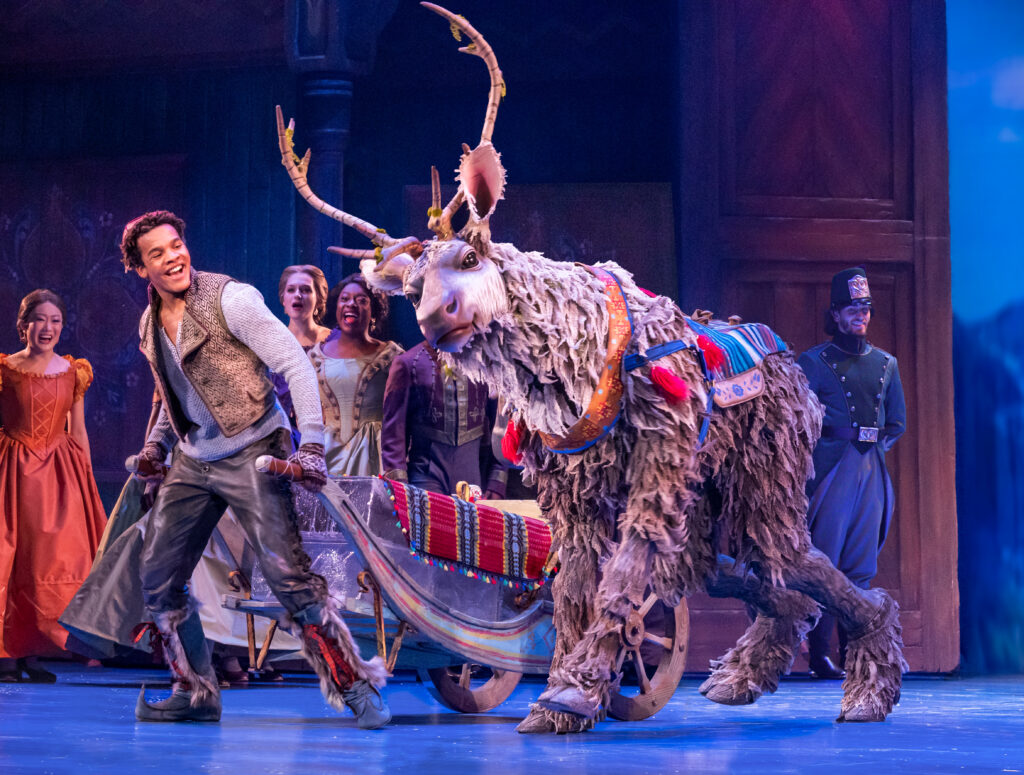 Through the magic of puppetry combined with immense talent, the players behind Sven (Collin Baja) and Olaf (F. Michael Haynie) will astonish you. The skills Baja possesses to become Sven is simply mesmerizing.

As for Olaf, not only does Haynie pull the strings to make you fall in love with Olaf all over again, he has the pipes that will melt your heart and quite possibly outshine and out sing Josh Gad. 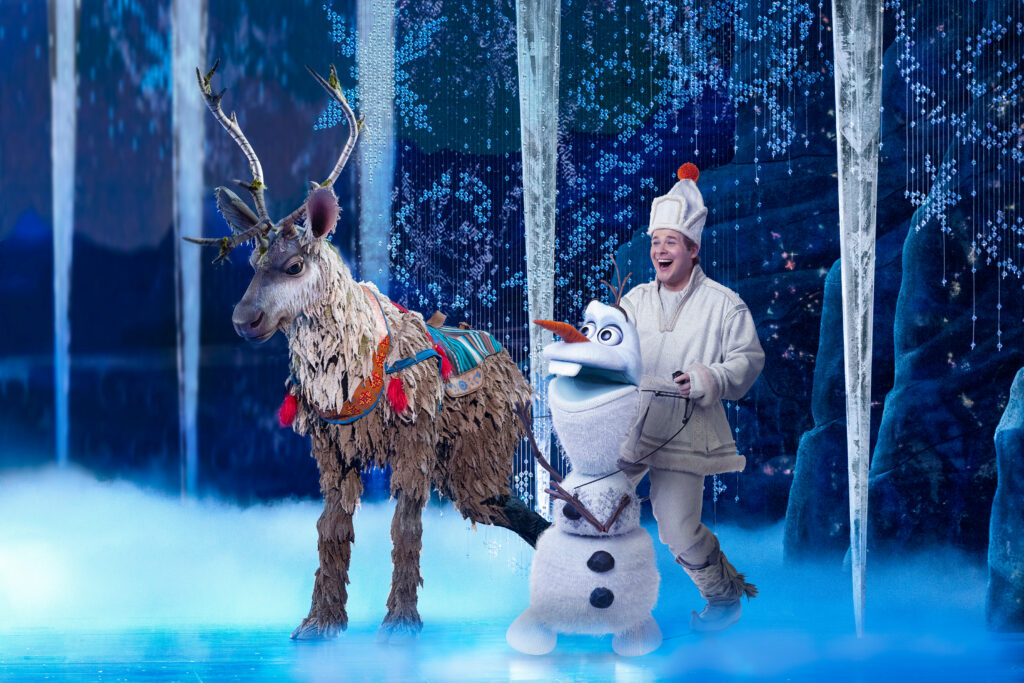 So yes, much like The Lion King, Disney’s Frozen delivers the puppetry; it’s truly a work of art and that’s just the tip of the iceberg.

But what about Elsa’s iconic ice palace scene “Let it Go”? Does the Disney Theatrical Production pull it off?

Oh hail YES! Disney’s Frozen was better than I could have ever imagined! I am s-mitten.

In the blink of an eye, Elsa (Caroline Bowman) magically transforms into the ice queen we all love. Bowman embodies the stage presence and talent necessary to sing the Oscar-winning song.

Like cascading snow, Disney’s Frozen delivers layers upon layers of magic. Near the end of Act Two in “Colder By the Minute”, the entire cast dressed in white creates the climatic blizzard scene where Anna’s frozen heart transforms her into an ice statue. The fascinating complexity and special effects of that scene truly blew me away. Like dominoes, the ensemble falls as icicle lights project onto their bodies to simulate Anna’s crystallization. It’s astonishing.

With all the wonder and magic, Disney’s Frozen earned its ranking next to Disney’s The Lion King. 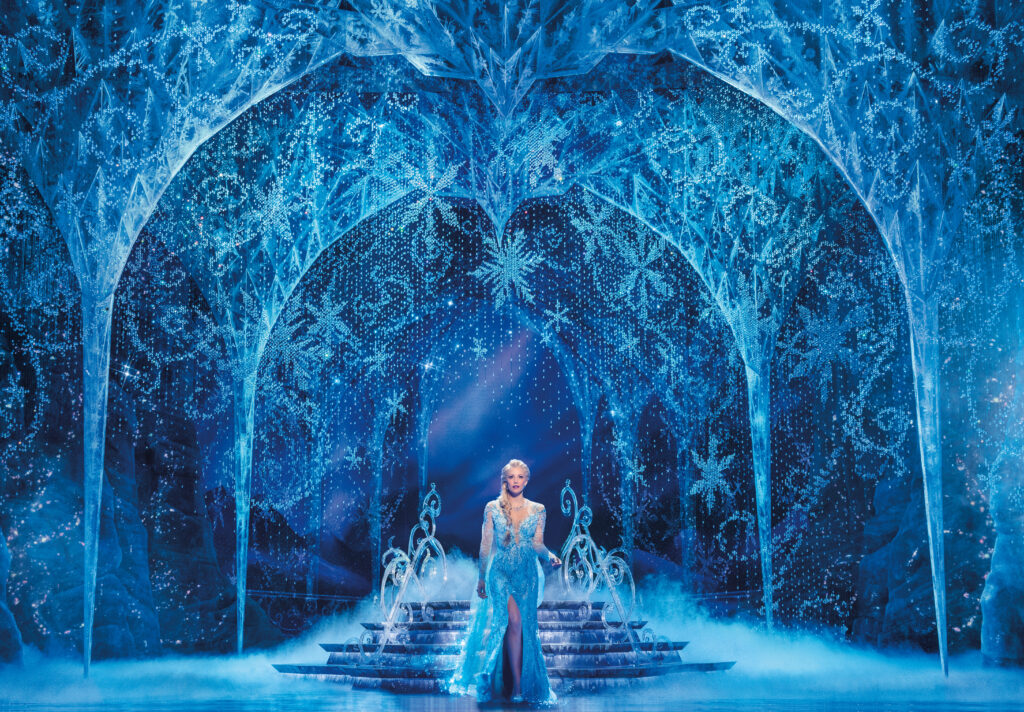 Disney’s Frozen is definitely your next Straz must-see show this season.

Experience all the icy feels, wonder and magic of Disney’s Frozen. Now playing at the Straz Center until Sunday, April 6.