Sometimes races make good learning experiences.  Such was the case with the Tarpon Springs Triathlon.  Although it my fifth sprint triathlon, the event was full of first time experiences.

For one, it was my first gulf swim.  That had me a little nervous, but I thought I could handle it.  That was until a storm rolled through.  As I drove into Fred Howard Beach beach that morning, lightning illuminated the pitch black sky over the Gulf.  That should have been my first sign to turn around and go home, but I saw others unloading and entering transition, so I decided to ride out the storm.

Since I missed early packet pick-up, I still had to receive my bib numbers and goodie bay.  Already looking like a pack mule, I now had another racing backpack to carry.  I tried to enter transition to just unload everything, but since I didn’t have my number on my bike or my body marked, I wasn’t allowed to enter transition.  So I stood outside of transition and unloaded everything to make my numbers and papers visible.

Once finally in transition, I found my rack, but it was full and there was no place to even set my belongings.  Apparently, someone racked their bike in the wrong place, but even after she moved her bike and belongings, there was still barely any room for me.  With two backpacks, a towel and running shoes, I made do with the little space available.

Now, that I was all set up, I could take a breather and snap some photos.  I watched the sun rise in the east as lightning still lit up the sky over the Gulf to the west of us. 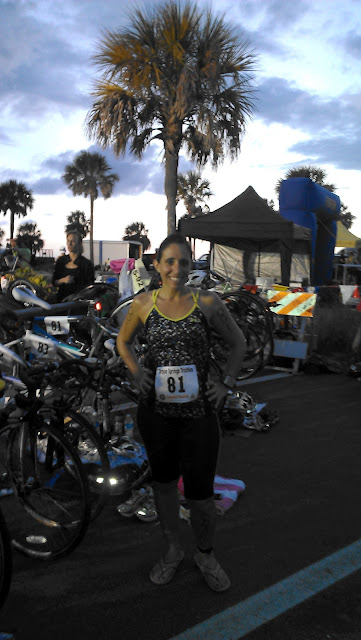 “Excuse me,” spoke the girl to my right. “You know you have a flat tire, right?”

I checked my tires last night, but I forgot to check them again this morning.  With the race starting in ten minutes, I quickly dismounted my bike and carried it over the Chainwheel Drive tent.  I must have looked like a deer in headlights, because my friend, Scott from Suncoast Running, reassured me that the Chainwheel Drive guy could fix it in minutes.  Like a sleight of hand magic trick, he literally fixed my bike in minutes.  My hero!  At that moment, I realized I need to pack an inner tube emergency repair kit in my car.

With minutes to spare, I mounted my bike again and headed down to the swim.  Over the beach, a rainbow appeared through the large dark gray clouds that blanketed the pink morning sky.  Once down at the shore, I realized I forgot to take my Garmin off, but I couldn’t reenter transition because it had closed.  I attempted to stash it under the water table but a volunteer offered to hold it for me and I was grateful for his chivalry.

The first swim wave entered the water with waves crashing down on them.  The large inflated buoys looked like sails.  As my wave lined up to enter the water, I decided to stay to the right of the pack. When the horn blew, we all charged into the water. Once I started swimming, I realized being on the outer right of the pack was not the best decision because the waves carried me farther out, which meant I had to swim back to the buoys.

As the waves rolled over me, I tried to swim my best.  Unfortunately, my stroke just wasn’t cutting it.  I struggled with each stroke.  At that moment, I realized I should learn to backstroke for this type of situation.  The lifeguards kept watch over the competitors from their canoes and I could feel their gaze on me, so I know I looked pathetic out there.  Once around the buoys, swimming back to shore was easy as the waves pushed me along.

As I ran back up the beach, my noble volunteer held out my Garmin for me, just as he promised.  In transition, I threw on my shoes and rolled on my way.  My Suncoast Striders friends cheered for me as I set on the course along the causeway, but riding through an ugly storm left me feeling less than cheery. 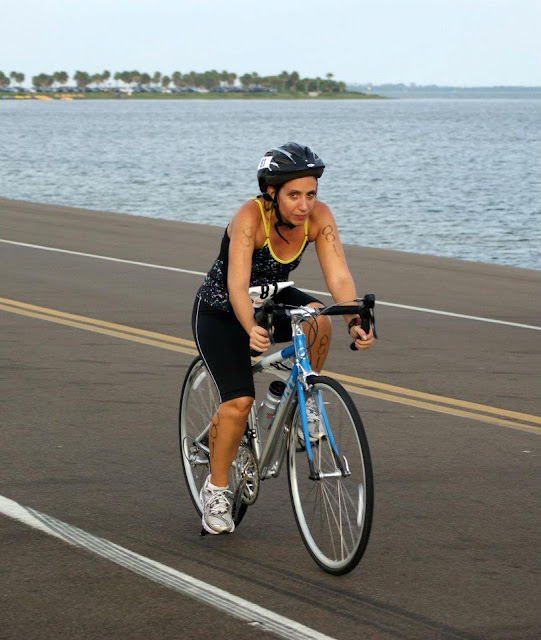 *Shout out to Aaron for the photo of me on my bike.*

We followed the road out of Fred Howard Park and rode through a residential area of Tarpon Springs, which had its share of hills.  The combination of hills and wind from the approaching storm was yet another struggle for me.  Once the storm hit, cold hard rain pelted me.   The wind picked up and my speed slowed down to 6 mph.  I felt like I was peddling backwards.  I contemplated hopping off my bike and running with it but I didn’t know if I would be penalized.  So, I continued slowly pedaling forward.

Finally back in transition, I racked my bike and ran off in the rain.  I was ready to be finished.  For the run, the course took us back along the causeway and through Fred Howard Park.  The path through the park was almost a trail run and on a better day, I would have loved it.  Large puddles covered much of the trail and I tried to find higher ground to avoid most of them; not that it would matter because my feet were already drenched.

As much as I hate rain, this leg of the triathlon felt good.  It may have been because I was nearly finished, but more likely, I knew this was my strongest suit.  I could redeem myself after nearly drowning and pedaling backwards.  Even with harsh wind and cold rain pouring down on me, my stride was strong. I even had a sprint left in me which I saved for the last stretch to the finish line.

I see everything is a learning experience and this triathlon was no exception.    I now know I need to pack a fix-a-flat kit and learn how to change a tire.  Even though I’ve been saying it for years, I fully understand the importance of taking a master swim class so I can learn other swim styles and stroke techniques.

Although the weather and hills were horrendous, I would participate in this well-organized, small sprint triathlon again.  Next year, I hope to be better prepared and back with a vengeance to improve my overall time.