Honestly, I went into the Disney Marathon with no expectations other than just finishing it and trying to keep up with my running partners.  I anticipated finishing somewhere around 6 hours like I did 4 years ago and if I could beat that time, than that would be just mouserific. 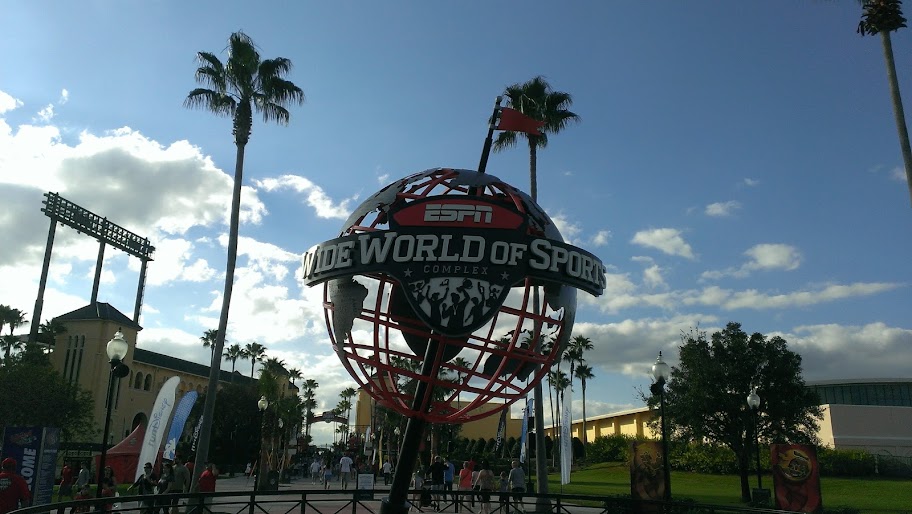 First, I had to change corrals.  I’m not sure how or why but I was placed in Corral G when all my running partners (Marie, Daffodil, Chrissy, Larisa and Maribel) had been placed in Corral C.  Rumor had it that participants could move corrals easily if they brought documentation with previous race times to make the change.

Even with a printout of my Gasparilla marathon, I was told that I needed a 4:15 or better or a half time of 2:06 for Corral C.  In a bit of a panic, I searched my blog for race times, but I was instructed to visit the computer kiosk for an official printout.  Not exactly the stress I wanted to deal with before a race, but I located a satisfactory time and printed it so that the corral correction could be made.  Thank goodness!  Now, I could start the race with my running partners! 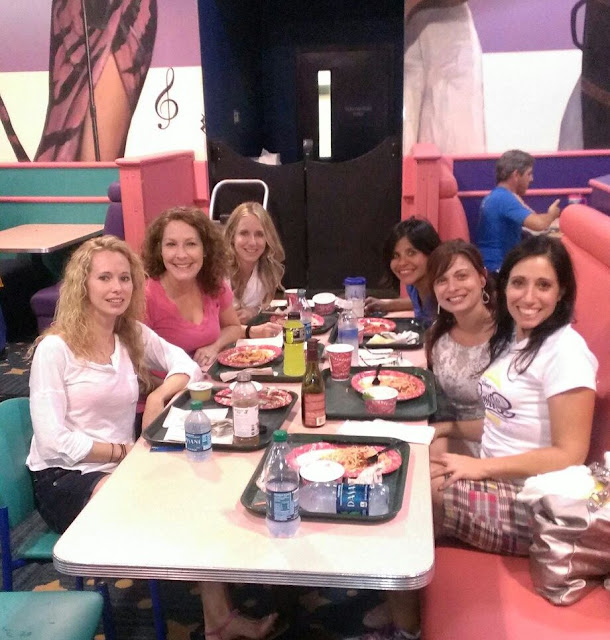 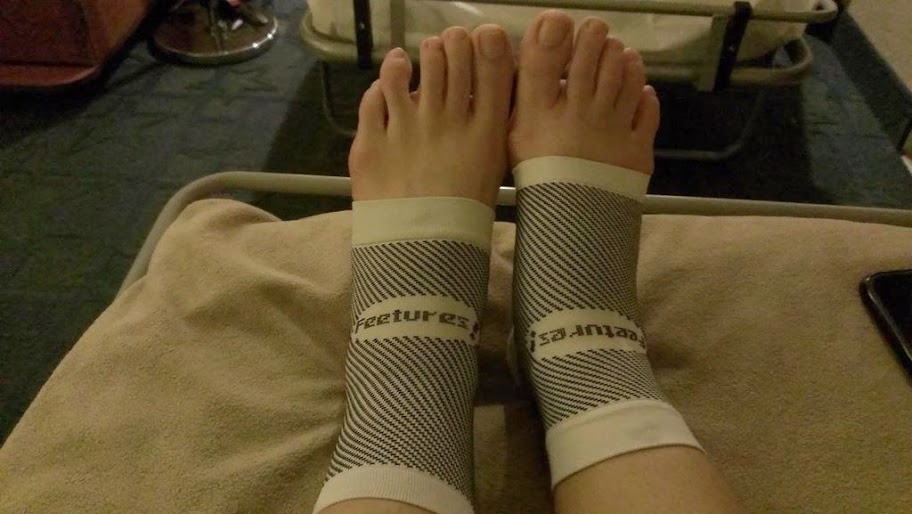 The night before the race, we carb loaded with pasta at the cafeteria in the All Stars Music Resort.  I also prepared for the race by wearing my Features! PF sleeves to bed and popping three ibuprofen to prevent any swelling.  In the morning, I took three more ibuprofen. 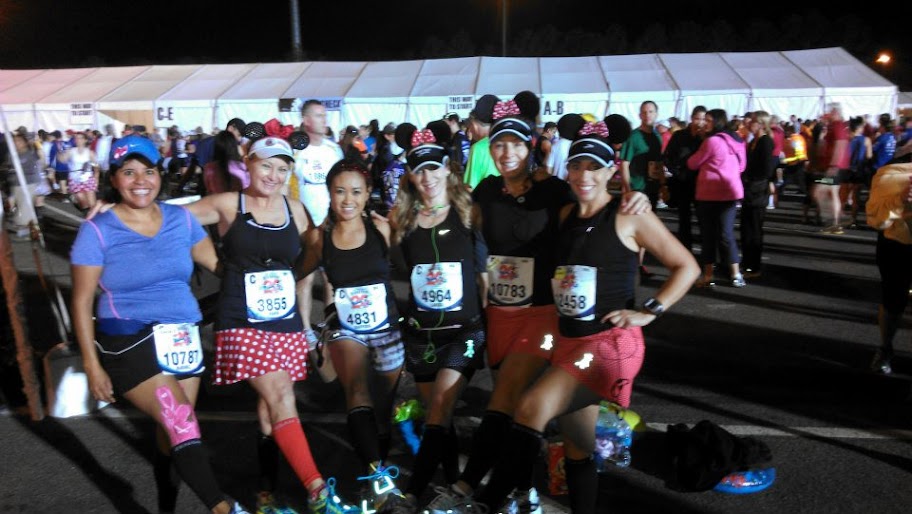 As with any Disney race, the attire is critical.  There are certain races you dress in costume for and costumes are a must for any Disney race.  My girlfriends and I decided to wear the red mini dot athletic skirt form Running Skirts and black Zensah compression socks.  The extra large pockets in my Running Skirt held my two mocha Cliff Shots, gummy bears, MP3 player and lip balm.  My black Gracie Gear pocket tank held my phone.  Our running partner, Daffodil, had also ordered bibs for us that benefited the victims of Sandy Hook. 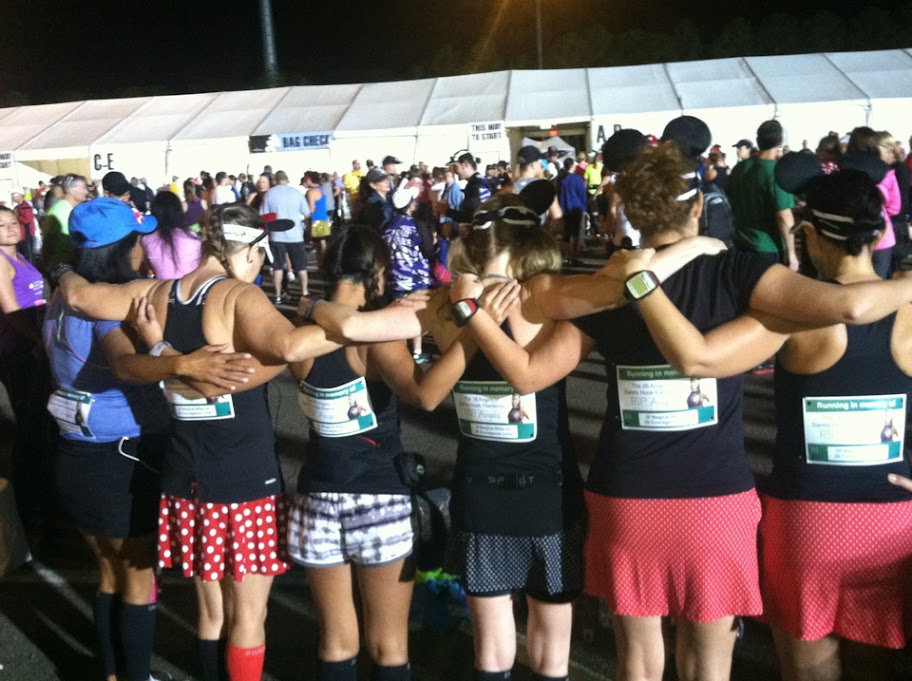 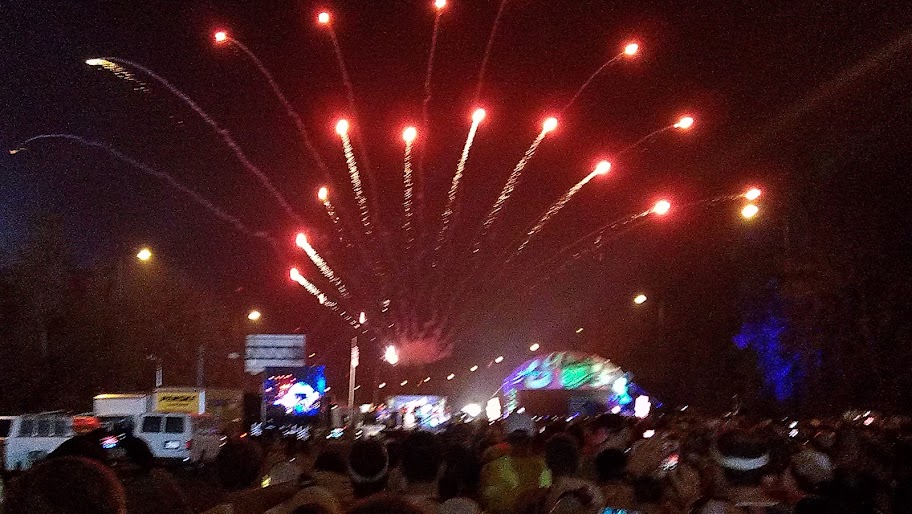 Since Disney races are a first class operation, no fuel belt is ever necessary.  There are water stations every couple of miles and first aid stations just as frequent.  With the weather unusually and expectedly warm for January in Florida, we took advantage of every water station.  I drank water and Powerade at every stop, though I rarely ever drink Powerade or Gatorade during my training runs.  I also found myself needing more Vaseline than usual to prevent chaffing from all the sweat.

This year, the race officials changed the course.  Instead of running the usual overpasses or “Disney hills” as I like to call them, we ran through the Walt Disney Speedway and Wide World of Sports.  The slant of the race track added a bit of stress on my knees and ankles, so Chrissy and I slowed our pace, stopped for a few photos and even walked some of it. 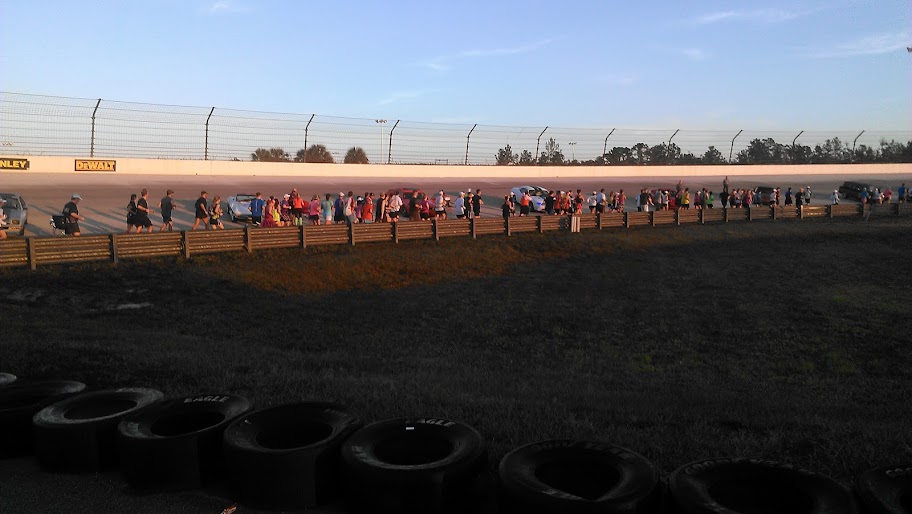 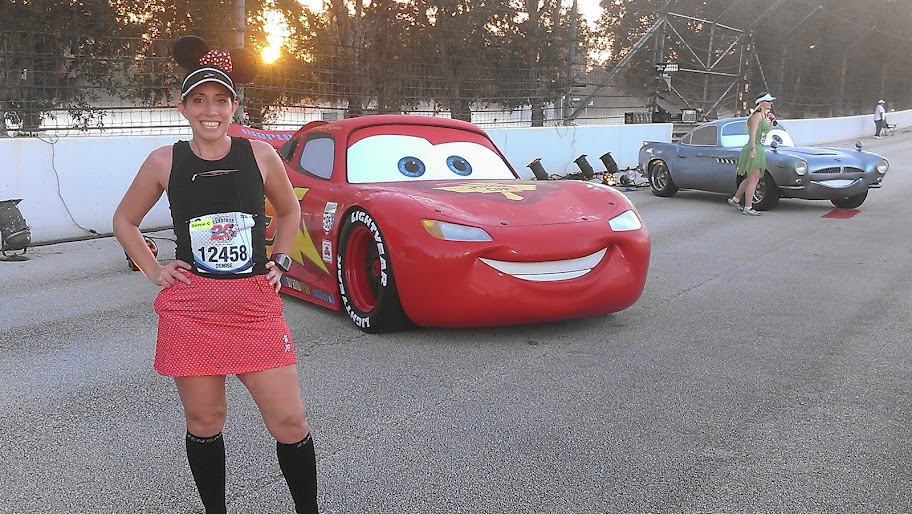 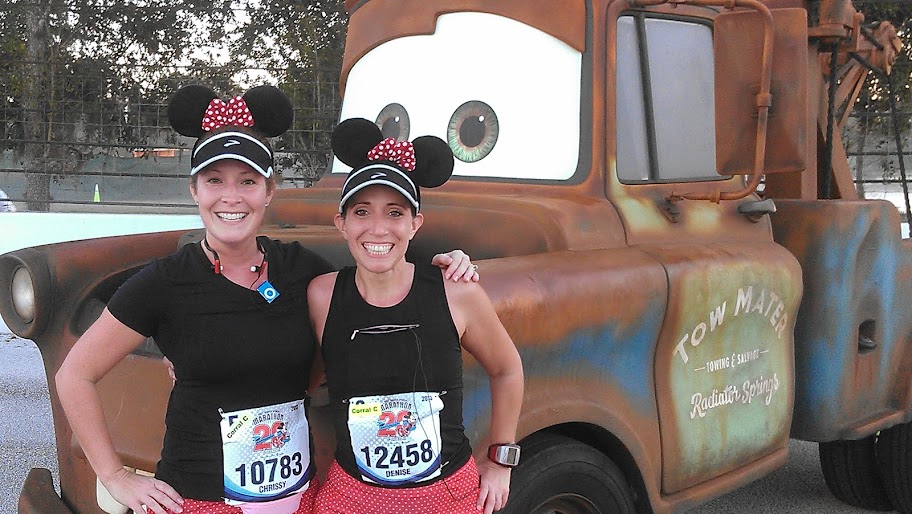 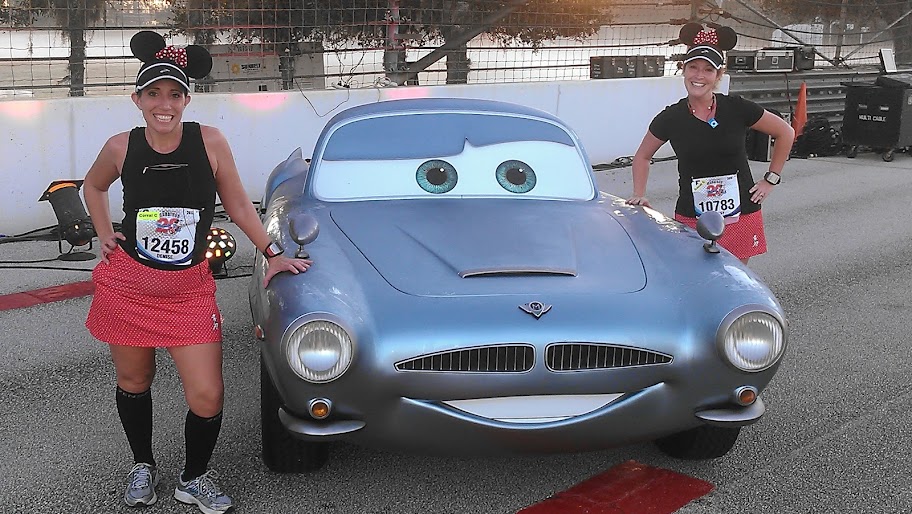 The change of terrain in the Wide World of Sports challenged our tired legs.  As we ran along sidewalks and loose gravel in the baseball field, we slowed our pace once again. 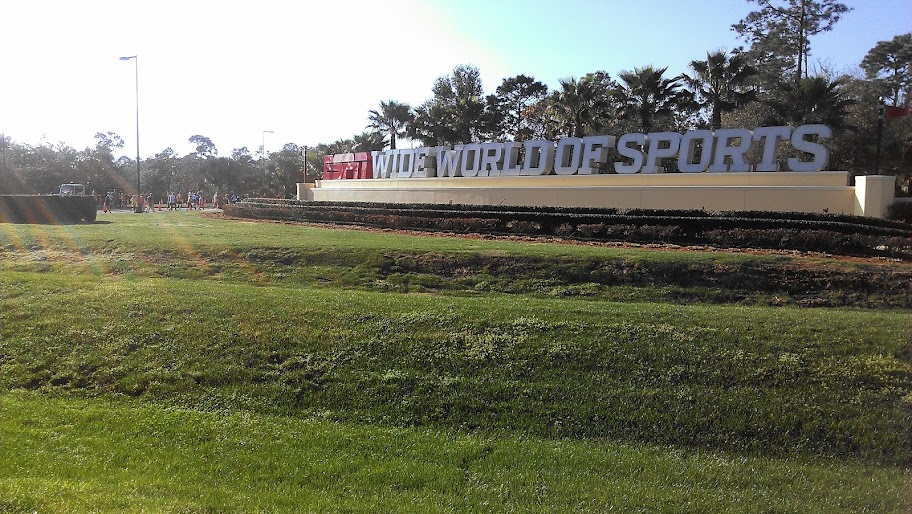 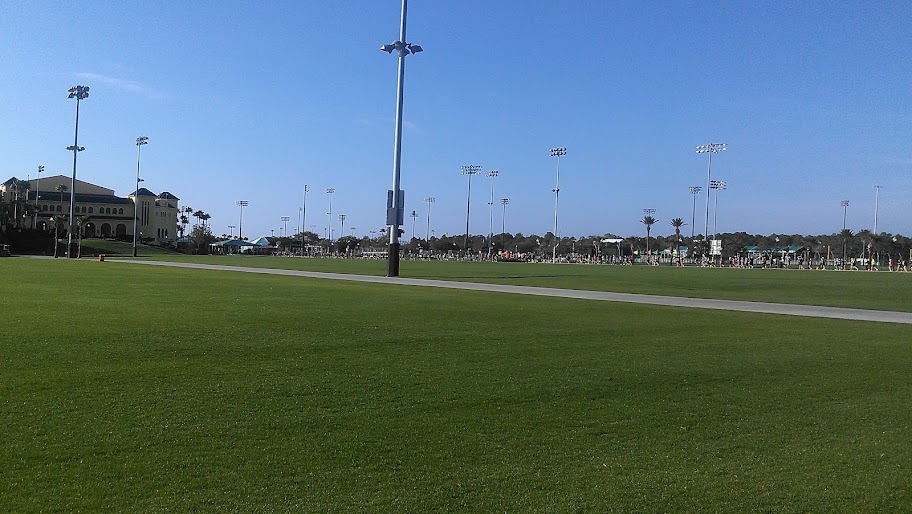 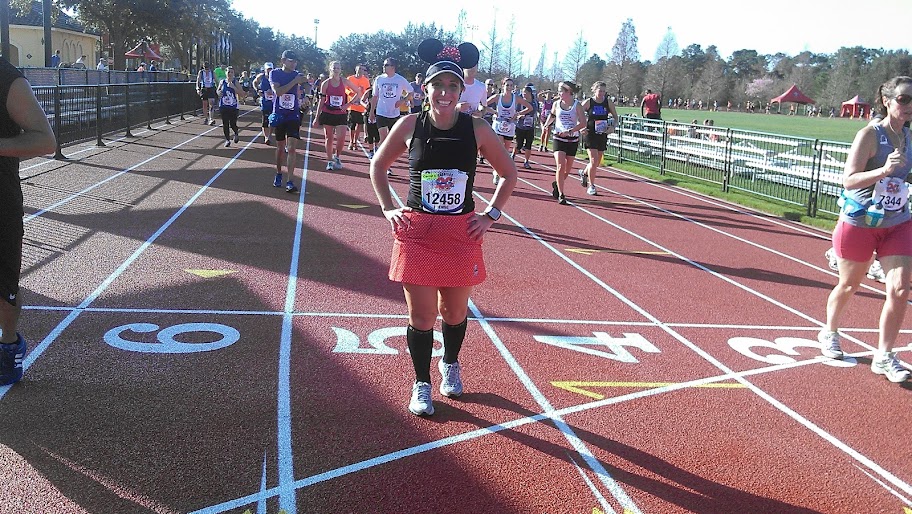 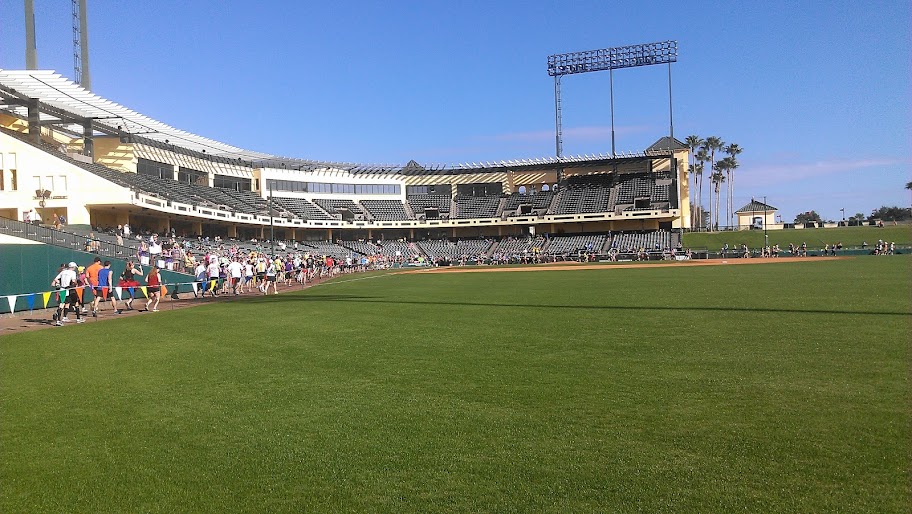 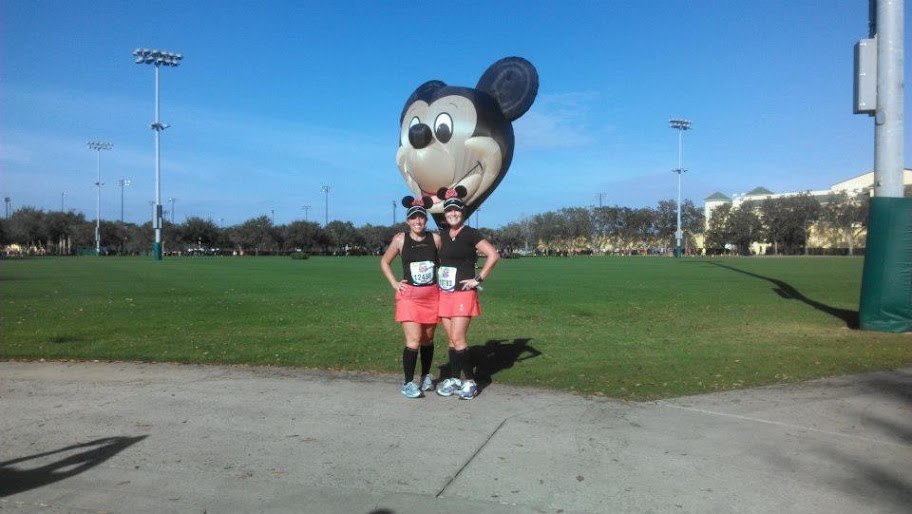 I actually liked the course changes, except that we entered the Magic Kingdom before sunrise.  Of course, a gorgeous glowing castle is more aesthetically pleasing and the dark morning sky offered a beautiful backdrop to Cinderella’s twinkling castle, but it didn’t make for the best light for photographs. 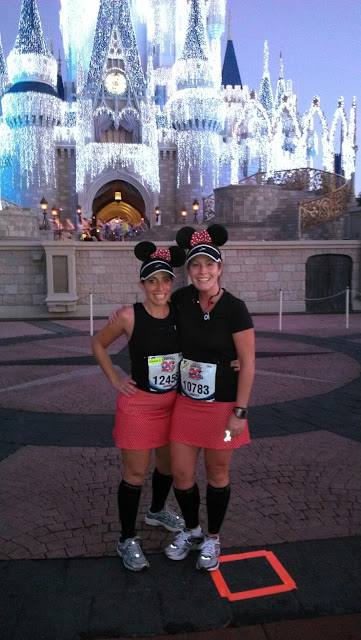 Chrissy and I also stopped for our first potty break in Tomorrowland.  The bathroom was hot, but at least there was running water and a mirror to check and adjust our Minnie attire.

Though our photos may say otherwise, Chrissy and I made very few stops for photos.  In previous Disney races, I made numerous stops because I didn’t want miss any photo opportunities (Unofficial Goofy and Princess Half).  This time, we agreed to just stop for the big things, like the landmarks in each park.

Around mile 15, I hit a small mental wall, but I managed to shake it off easily.  During my Space Coast Marathon in 2011, my plantar fasciitis began to bother me at mile 15.  This time, I wouldn’t allow my mind to start thinking about the pain that could happen because I felt great!  Though, just as a precaution, I decided to take two Tylenol at the first aid station.  I also popped a few more Tylenol at the next couple of stations.

Around mile 20, Chrissy and I spotted the 5:00 pace group and we felt pretty good about our progress.  We even caught up with Marie a few times.  Only another hour left to go!  However, that last hour was definitely toughest and the hottest.  My calves began to spasm with Charlie horses, but thankfully my Zensah compression sleeves kept me from collapsing. 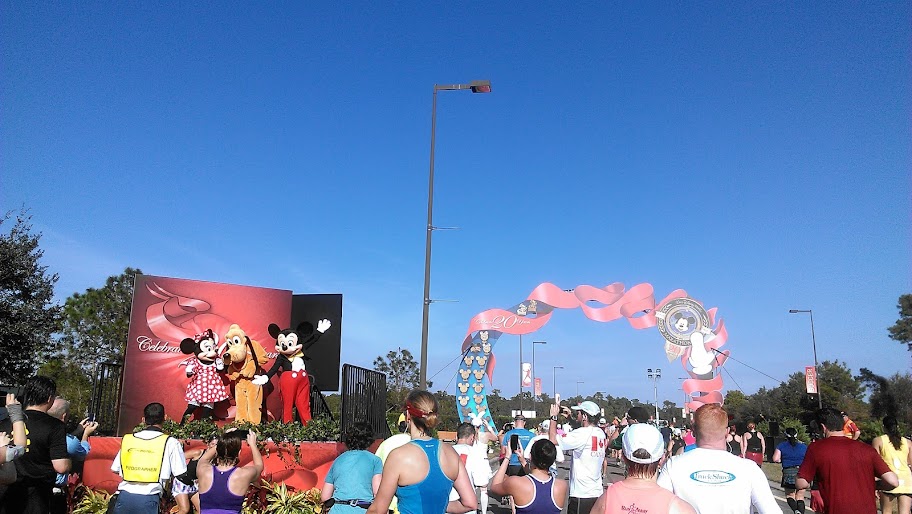 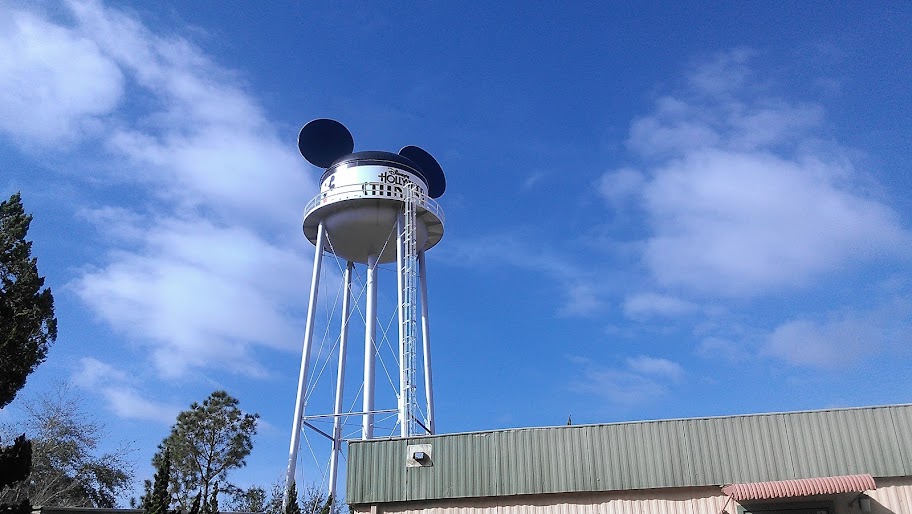 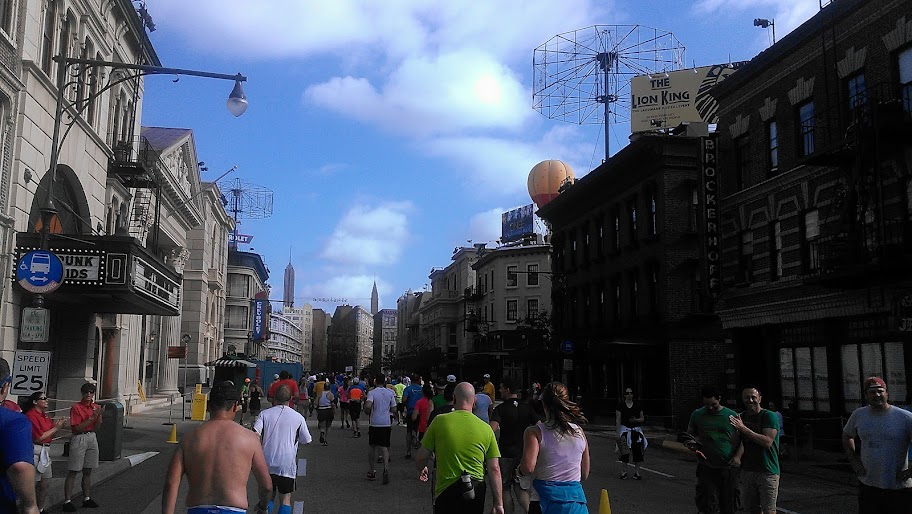 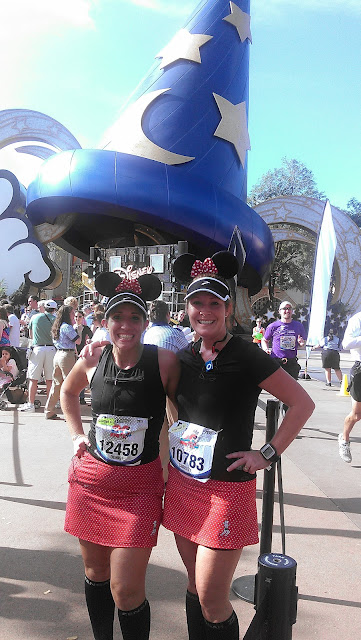 Though most of the last miles are a blur, Chrissy and I kept trotting on along through the heat.  The spectators’ signs kept our spirits up and we even chuckled at a few of them to forget about what we were doing.  “Is that a Cliff Shot in your pocket or are you happy to see me?”  “Go random, stranger! Go!”

Many of the spectators were guests waiting to start their Disney magic and park exploration.  Instead, they happily cheered for us along the sidelines.

Throughout the course, other runners congratulated Chrissy and I on our efforts.  At first, I thought everyone was being so kind and supportive, but I had forgotten about the Sandy Hook bibs on our backs.  We were simply running “26.2 magical miles for 26 courageous lives”.  I learned after the race that Daffodil dropped a heart labeled with a victim’s name at each mile marker.

Chrissy and I entered Epcot with only a mile left to go and then, I hit my wall.  I couldn’t run anymore and pools of tears filled my eyes.  Between the heat and the smell of coffee and funnel cake in Epcot, I lost my mojo and I thought I would vomit.  I needed to pull it together to finish.

We walked most of the World Showcase and picked up the pace once we reached the bridge past Mexico.  Then, we stopped for one last photo in front of Spaceship Earth and ran the last quarter mile as hard as we could.  We were ready to be finished. 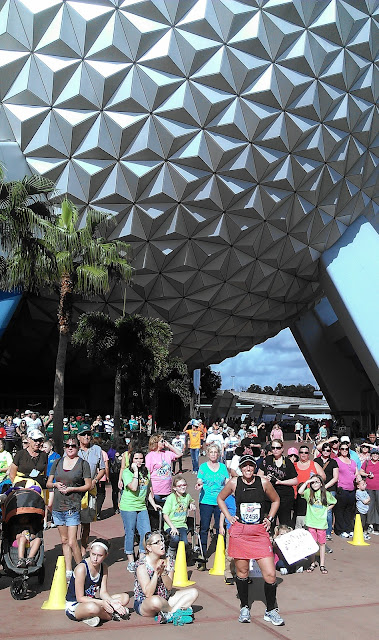 Chrissy and I crossed the finish line together (her first and my fourth). 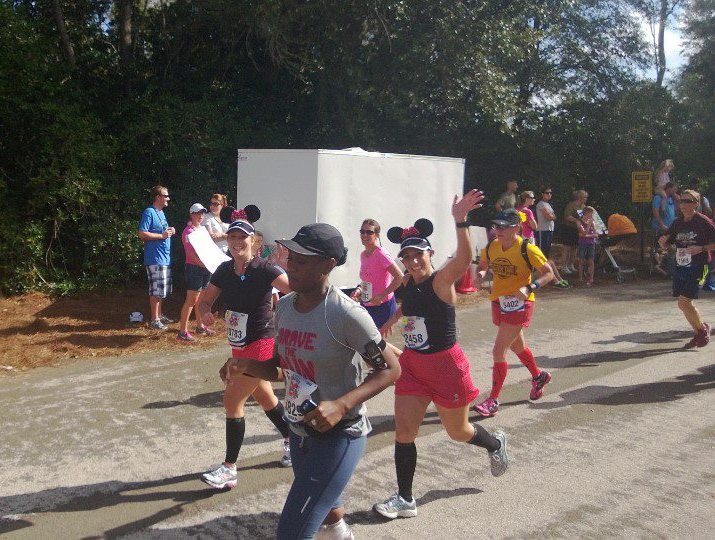 Despite being my fourth, I’ve never crossed the finish line of a marathon with a friend by my side.  I will always treasure sharing that moment with Chrissy.  No matter the marathon, I often become emotional once crossing the finish line and this race was no exception.  A wave of emotion overtook me, but I held back the tears until a Mickey medal was placed around my neck.  Then, I cried five and half hours worth of tears. 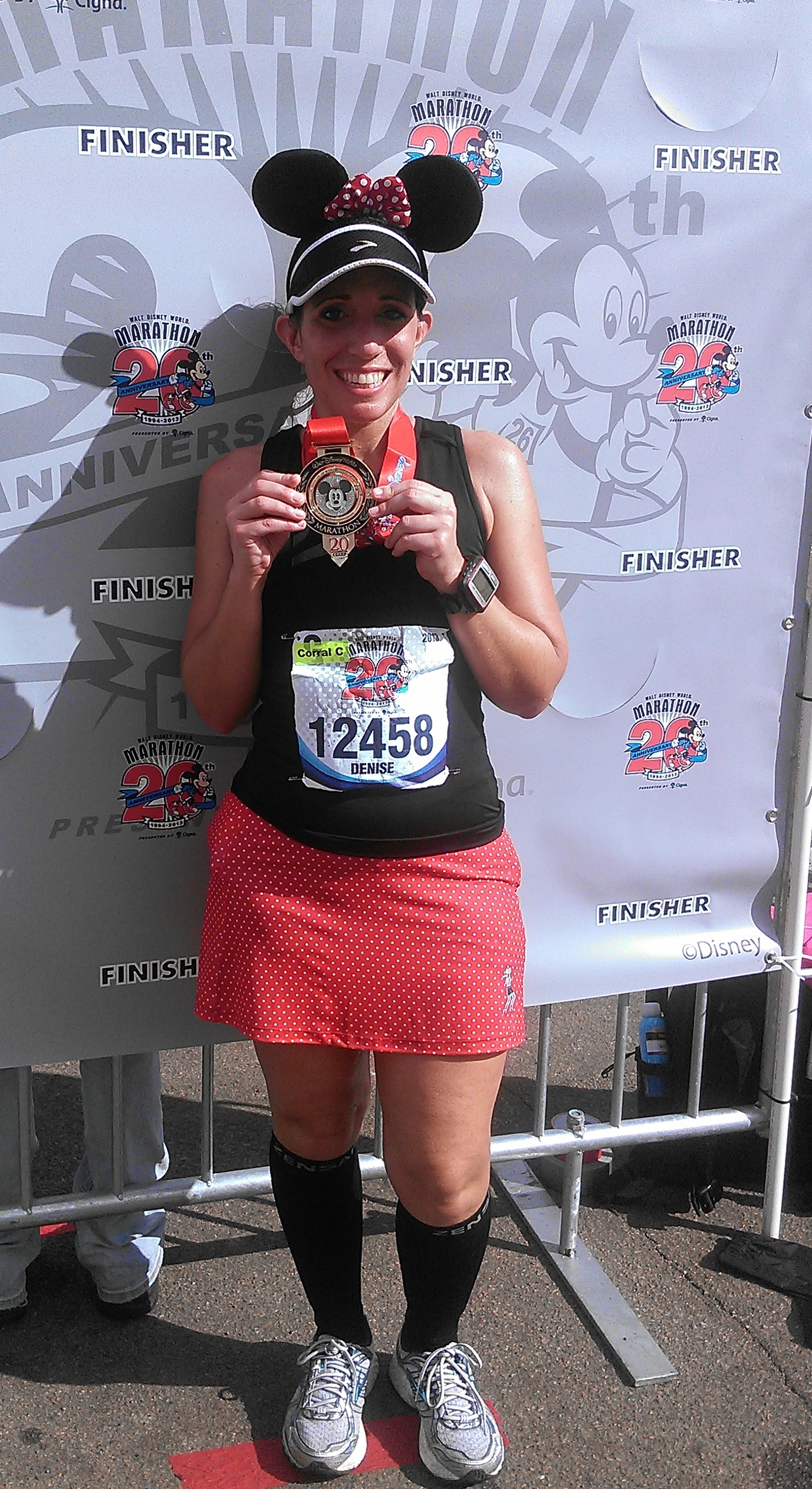 We did it.  Every step of the way, we have been there for each other and we finished the journey together. 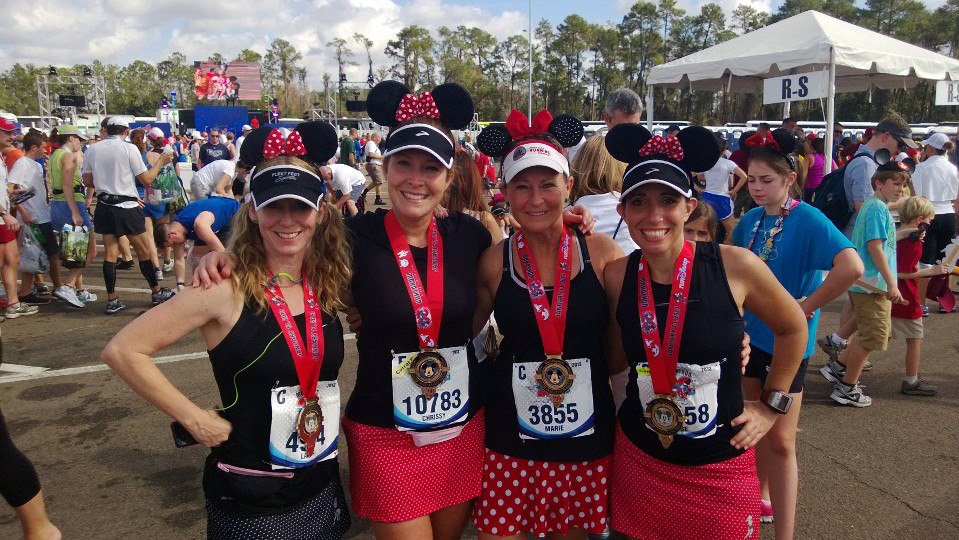 But that journey could never have been completed without the wonderful support of our families and especially our cheerleaders, Tanya and Faith.  Thank you for chaperoning us and driving our tired legs all over town! xox 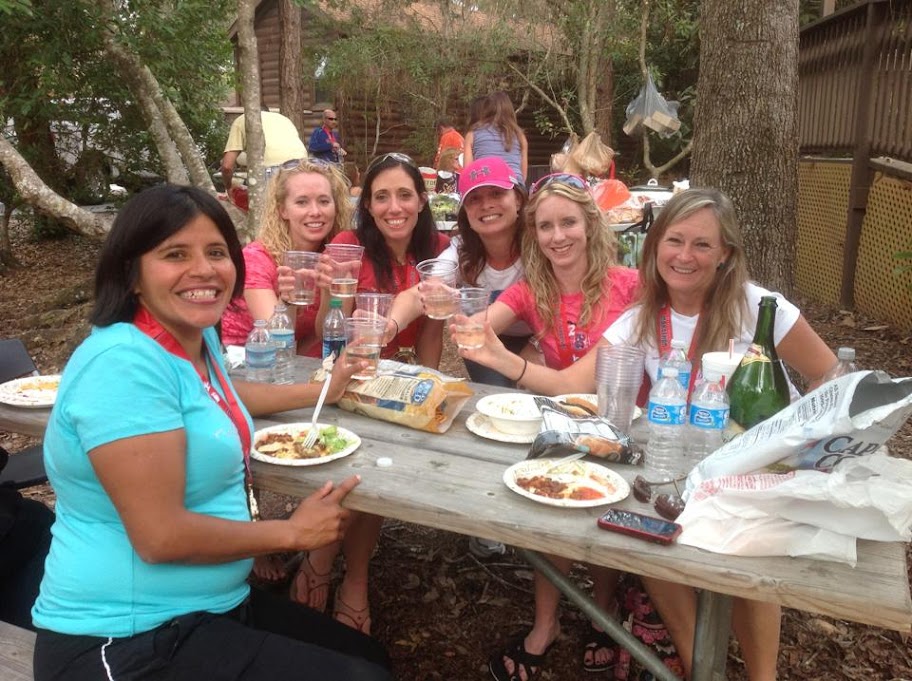